The stigma around cruising on Cunard Line ships is that you need to be rich to cruise one of the three queens.

Cruising has become very popular over the last few years and it’s no wonder why. With so many wonderful destinations available and with the knowledge that you unpack once and relax with everything taken care of, what more could you want?

As for the price tag associated with cruising well it is a mixed bag really. You can find some really cheap cruises from $45 per day right up to $600 per day and more.

It all depends on what cruise line, cruise ship, cruise sailing date, cruise length and type of stateroom you choose. With that being said if you’re diligent and do some research you might even find a really good deal on some of the more luxurious lines. For example we have just cruised on the luxury Cunard Line for 14 nights from Brisbane to Yokohama onboard the Queen Elizabeth. 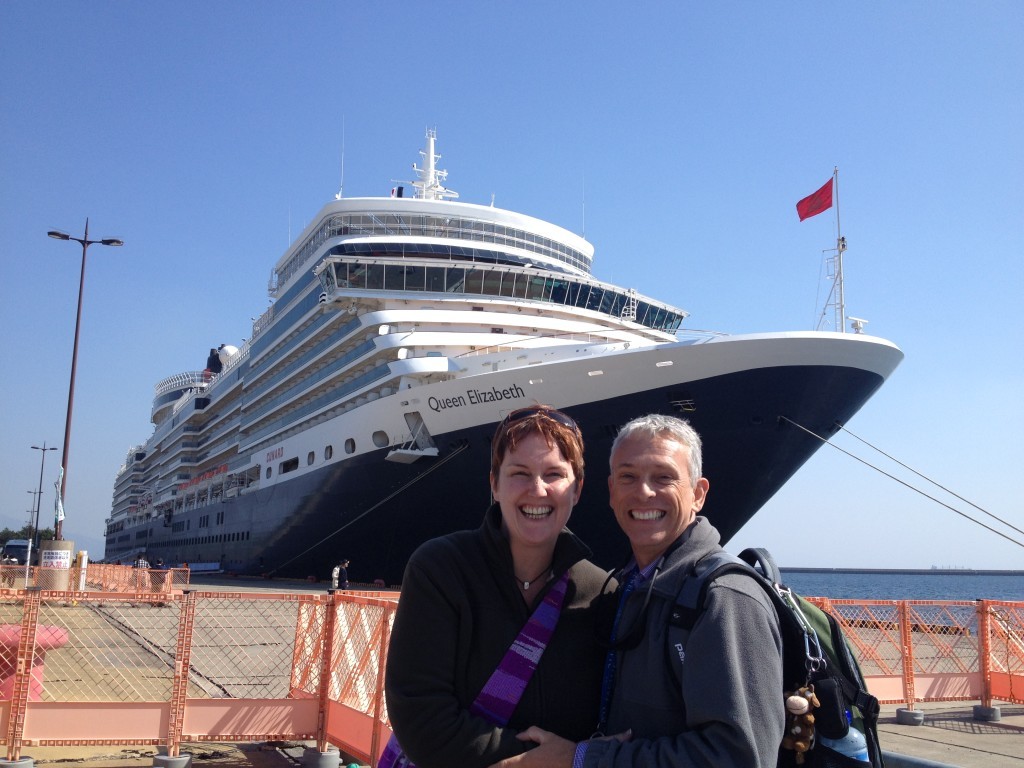 Instantly your eyes open wider and ears are more alert when you read that I know, but I managed to get a great cruise deal. True it took some searching around the web but if you want a great online cruise deal then pay attention.

This Cunard cruise for 14 nights on the Queen Elizabeth was what they call in the cruise industry as a repositioning cruise. That means that the ship is making its way from one area to another for another season.

Depending on which ports the cruise ship calls at will depend on when and where you can embark and disembark. Not all cruise destinations allow you to join or leave a cruise ship.

For example when cruising from Brisbane to Yokohama via the Whitsundays, Yorkys Knob PNG onto Yokohama you can not disembark in those ports as they are only visiting ports of call and are not set up as arrival and departure ports for immigration.

Now that you know a little bit more about how the cruise ships work it’s time to start the fun bit and get searching online for your dream cruise.

That is what I did to score a great deal on our Cunard cruise to Yokohama on the Queen Elizabeth in March 2014.

I  have always wanted to cruise on one of the Q Three Queens, either Queen Elizabeth or Queen Mary 2 or Queen Victoria it didn’t matter. My grandfather cruised on the QE2 back in the days when she was still doing the Transatlantic crossing that Cunard are famous for.

The menus from that cruise are locked away somewhere amongst my collection. And the stories that I grew up with from my Nan & Gramp when they did many of their Mediterranean cruises, little did they know that they were planting a seed within that has developed into this full-blown love of cruising.

Having found the cruise that I was looking for, one that was leaving Australia and heading towards (any destination really it didn’t matter) Japan I kept an eye on it and watched and waited hoping that the price would move in my favour. You see some cruises will always go up they are the renowned most popular cruises that the cruise companies can fill with ease.

Others require a little more effort to fill and hence the price drops. It was just such a case that happened to my cruise. A repositiong cruise or a sector cruise that needed filling. And so the price dropped, with me being online every day I managed to scoop a balcony cabin for 14 nights on the Cunard Queen Elizabeth from Brisbane to Yokohama for $145.65 per night.

Out of  eleven cruises that we have done this Cunard cruise was not the most expensive by far. I have another blog post that shows the breakdown of all the cruises with the average price for a cruise per day clearly detailed.

Many of the Cunard cruises are very expensive and you do need to save up bigtime if your bucket list is to do a world cruise on one of the Cunard three Queen ships.

Just remember to search and follow some simple rules when researching for your dream cruise. It just goes to prove though, you don’t need to be rich and famous to cruise on the Cunard line.