We are attending the WDS World Domination Summit event in Portland from July 11th to 13th at the Albert Schnitzer Concert Hall.

This is our first time attending, and we knew that we had to have the finger on the pulse to secure tickets as they sell out real quick.

For us, living in Australia at the time they were put on sale was at 3am. I remember those early hours sat up in bed at our friends place as we were house sitting for them and looking after their two dogs, it was 3am and Moni had just purchased two tickets for us and we also booked in to the Heathman Hotel which is very close to the Albert Schnitzer Concert Hall, talk about being commited.

So here we are at the 2014 WDS event, earlier today we participated in the attempt to set a world record for the worlds longest yoga chain, confirmation is still to come from the Guinness World Records HQ although all the paper work has been lodged, I’ll keep you informed.

“We were amongst the first to register before the crowds”

Registration was in the afternoon and tomorrow the event really begins. We were amongst the first to register before the crowds which was good. At registration we received a back pack, some tokens for the break on day one, a short intro to Chris’s latest book, thermos flask and a WDS T-shirt, oh and of course our round name tags. 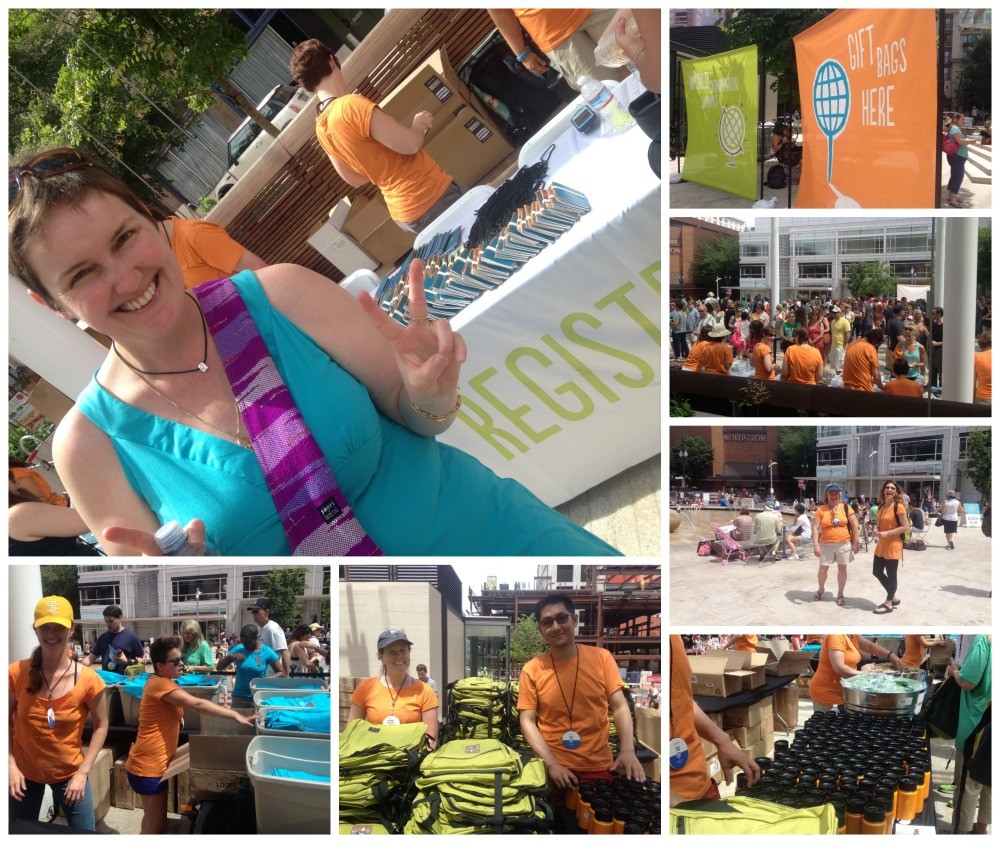 After registration we headed into town for lunch and coffee. There was a welcome party tonight if you wanted to go but we decided to stay in.

The view from our Heathman hotel window

The queue was long and I’m glad we were staying next door so that we didn’t have to get up mega early to be here on time. 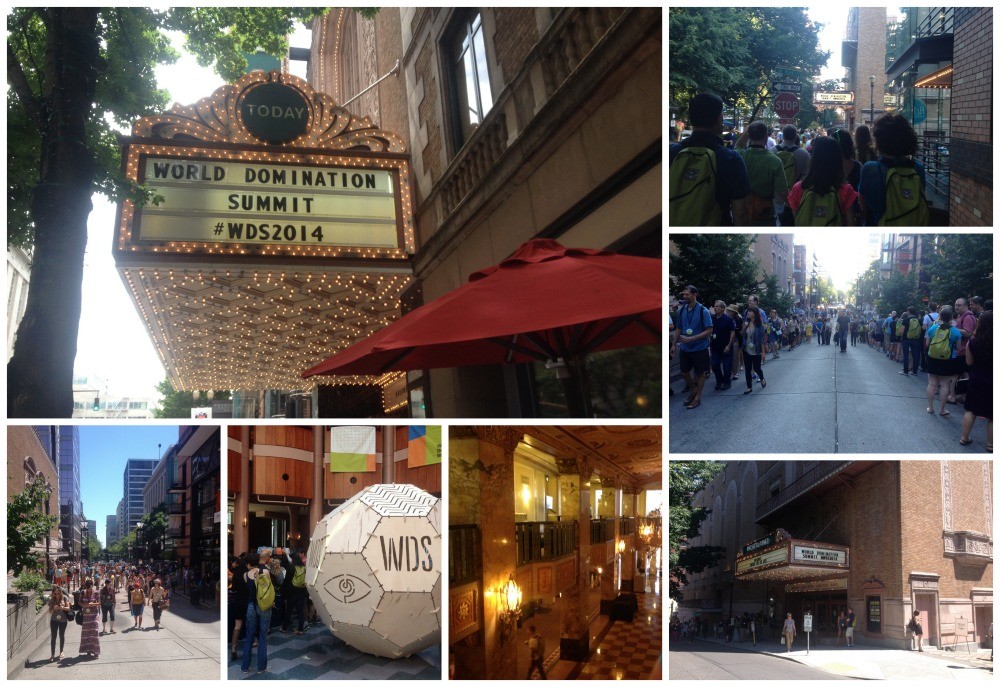 The long queue for the WDS

I’m not going to go into what was spoken or the keynote speakers as you can read up on all that on the WDS website, and there you can follow the build up to WDS 2015.

Go check it out if you’re interested, suffice to say that it was an event well done with great speakers and lots of enthusiastic attendees, some at their fourth WDS. During the breaks there were also mini events to attend if you wished, but they filled up very quick.

We headed into town for some lunch before the afternoon session. 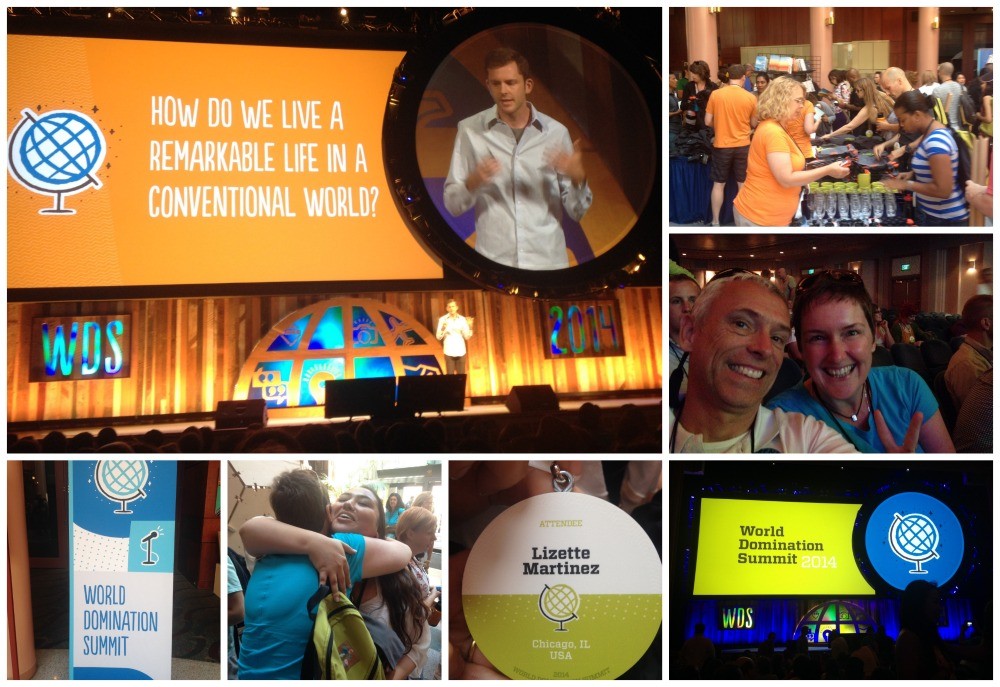 Inside the WDS event

When Moni wanted to purchase a T-shirt, they only accepted cash, Moni had none on her just a card, this lady Lizette bought her the T-shirt having never seen her before, how cool was that.

We had another great coffee this time at Case Study Coffee where Moni connected with some girls that were networking together, as you can see it’s Apple all the way here baby.

At the end of the day we got some food from the street carts, it’s so cheap and tasty $5-6 each. 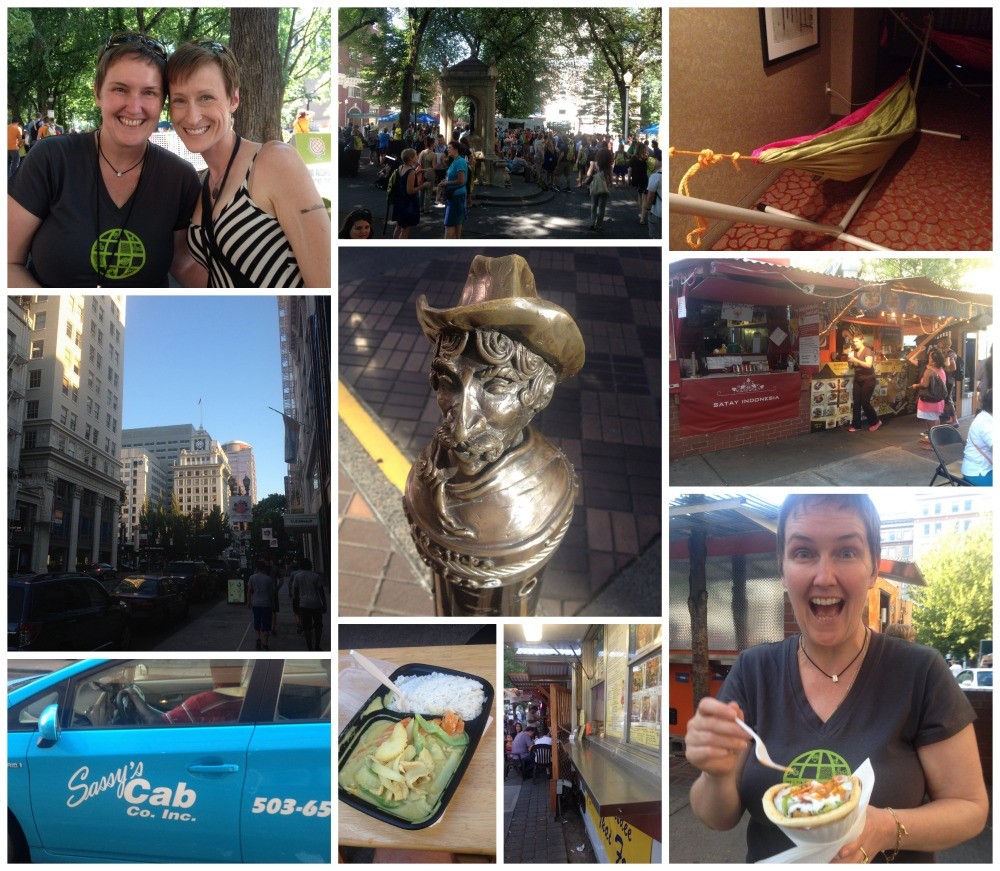 “That was day one at WDS. Day two started much the same”

The volunteers that are always around helping out are a very happy bunch for sure, high fives all around. 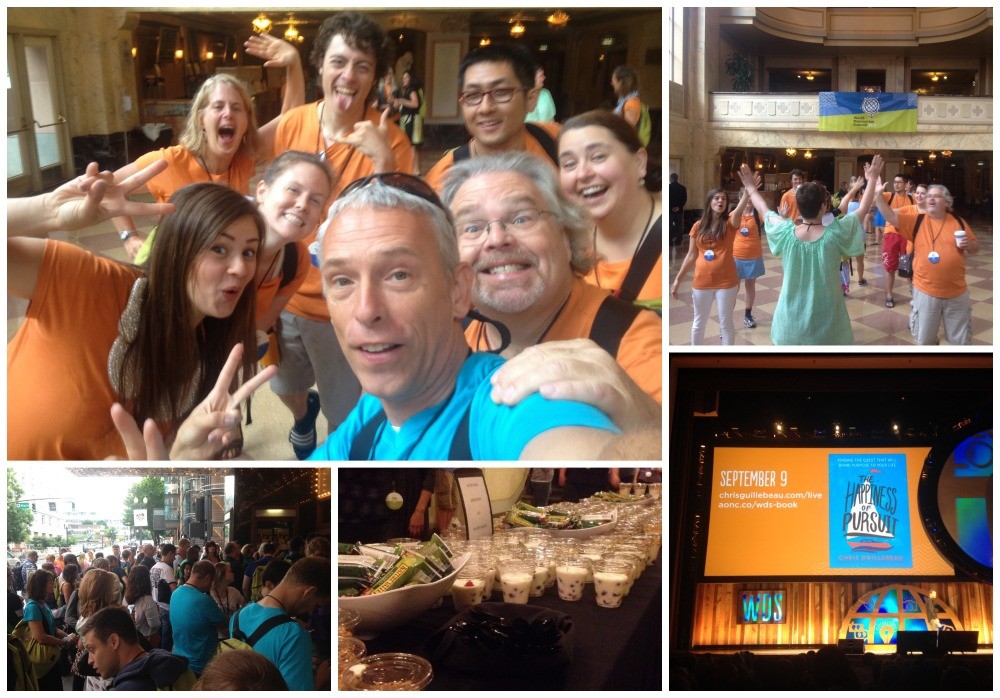 Day two of the WDS

At the mini breaks there are plenty of snacks, tea or coffee stations, the busiest places are the toilets for sure.

At the long lunch break we had a meal and chatted with some attendees, it was raining otherwise I would have watched the World Cup final in the square, but only die hard German & Argentine fans were about. 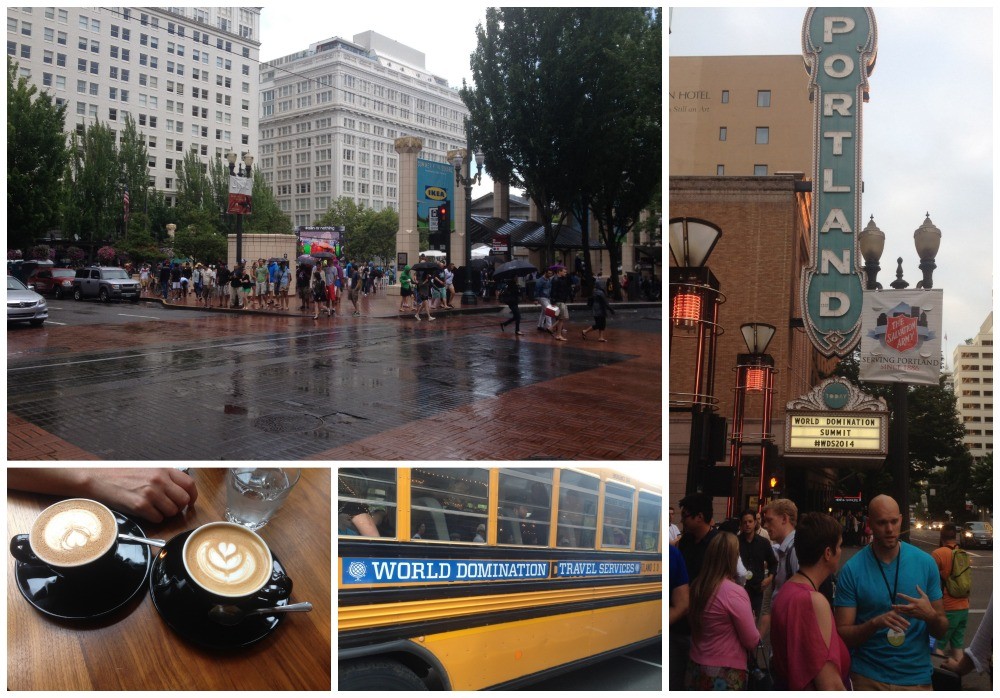 “the Bollywood party with DJ Prashant”

After the final session of day two had ended and with that was the end of the WDS 2014, but the after party was on later, they put on busses to get us to a huge park where Bollywood DJ Prashant was playing some tunes.

We waited in line for over an hour & half to get something to eat, which was annoying, but we chatted to some people and had fun.

After a feed we danced to the bollywood tunes and got covered in colours which is a tradition in India. 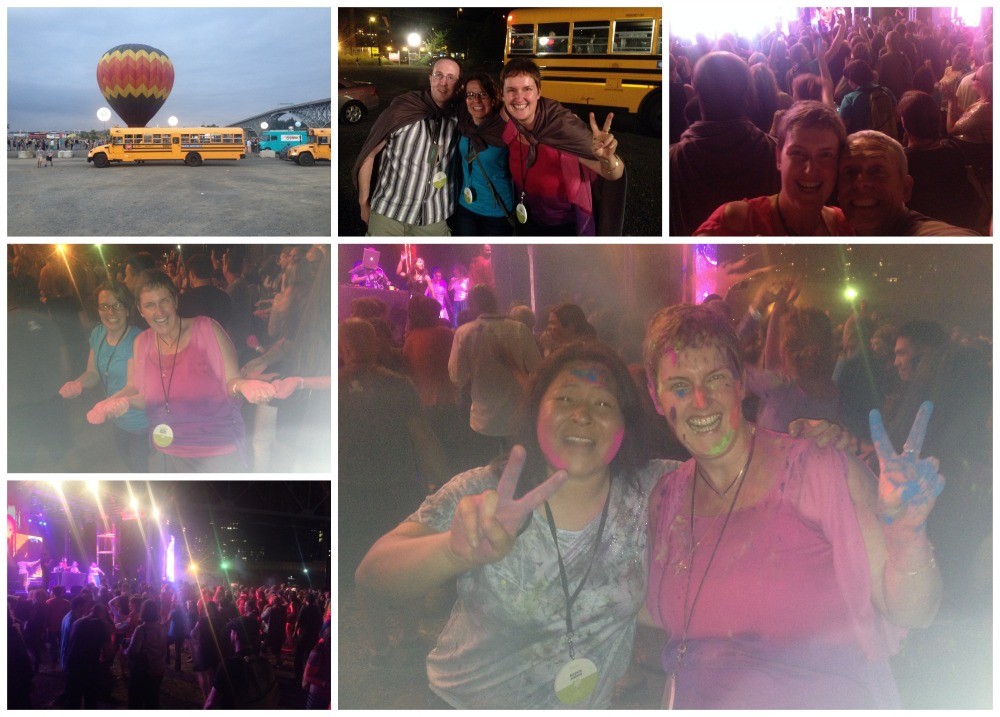 At the Bollywood party with DJ Prashant 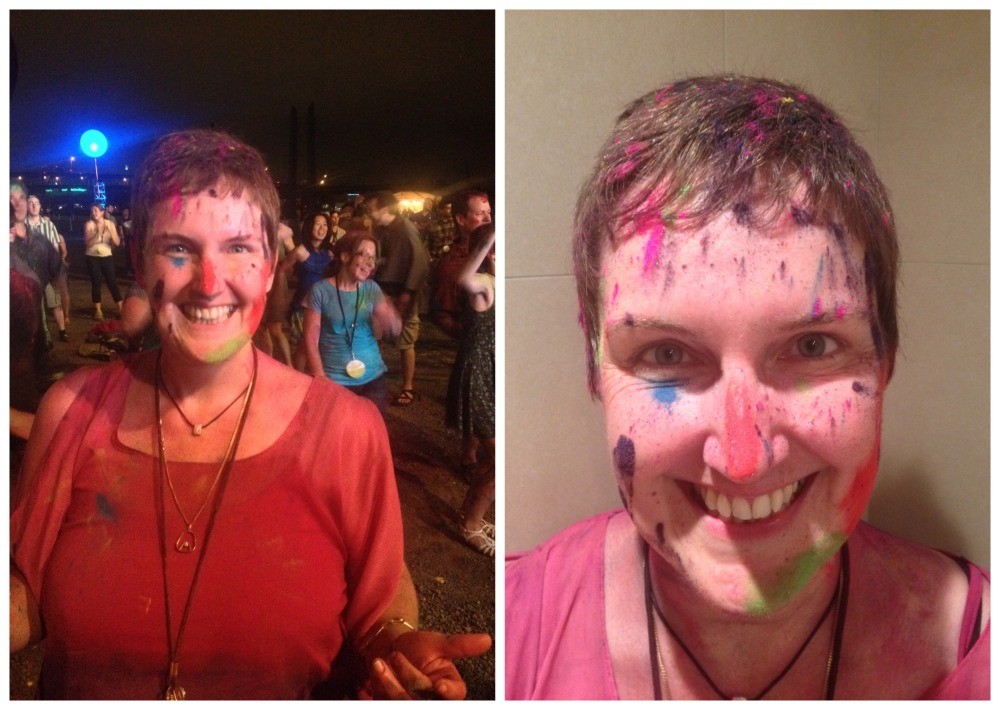 Moni after the bollywood colours

The Heathman Hotel in Portland

Tags: Albert Schnitzer Concert Hall, Bollywood party with DJ Prashant, colours which is a tradition in India, First day at the World Domination Summit, The view from our Heathman hotel window, WDS Registration