The views from the top of Morro de Arica

Having put our clocks forward another hour, we found ourselves arriving in Arica in darkness at 6am, sunrise was around 6.50am.

Arriving in Arica Chile in the dark

We were awake and saw the first glimpses of Chile before heading to breakfast. 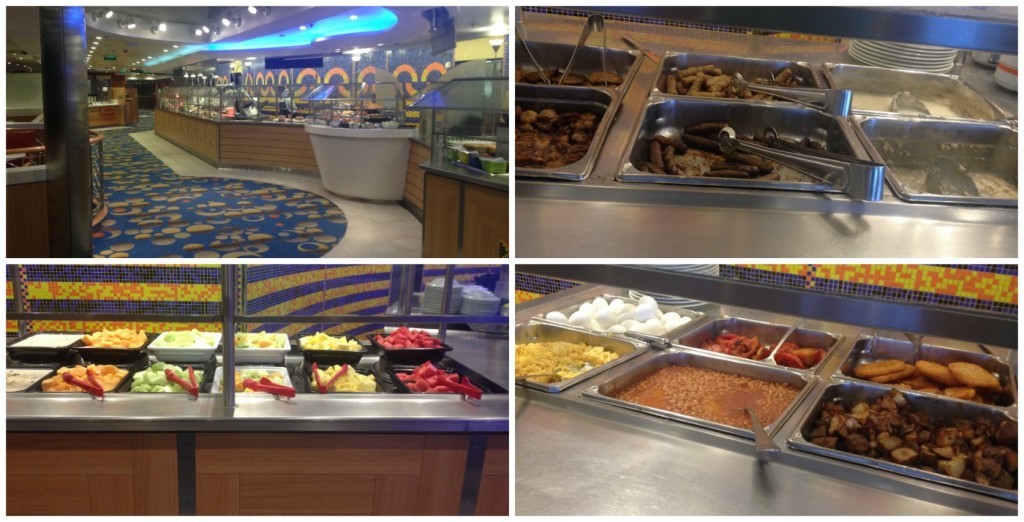 The breakfast buffet was looking a bit depleted today and as one of the officers explained they have started to run out of some items especially as the delivery was not as expected and only small quantities were taken onboard.

Panorama of Arica in Chile

Back at the room we packed the day bags and then made our way out. 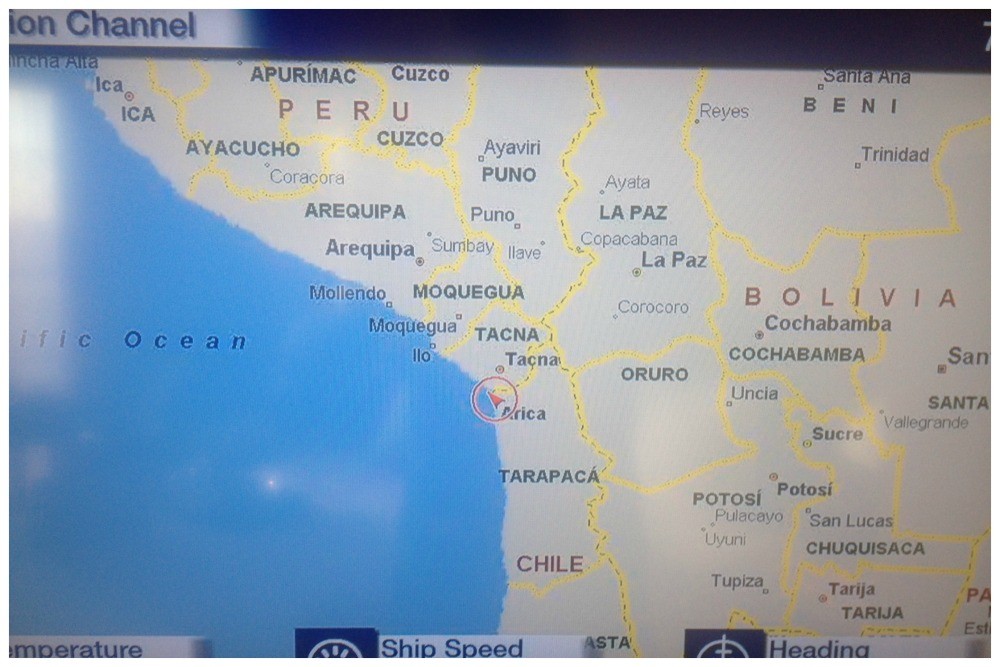 This dock is like the others and you can not walk off the ship and along the dock. There are shuttle busses provide to take us to the exit of the terminal.

Arica town is luckily just a short walk from the terminal exit, and considering that we are going to be staying in Chile for 2.5 months we had no intention of going crazy sightseeing.

The main square in Arica Chile

The town square was not over busy early on and the stalls were not all set up yet. As always the church is prominent in the main square.

Turning right after passing the church we made our way in the direction of the hill or bluff, past a police station and other buildings.

The walk through Arica to towards the Morro de Arica

Next we walked up the steps and joined the path to get to the top of mount Morro to take in the view of the city and the bay.

The walk up to the top of Morro de Arica

The ships tours also included a stop up here, and a taxi would have cost $20 USD. The walk was easy really and within about 20 minutes we were at the top taking in the views.

View to the port and city of Arica

At the top you can enter a museum of war relics if you wish, we just took in the views luckily before the majority of tourists arrived. 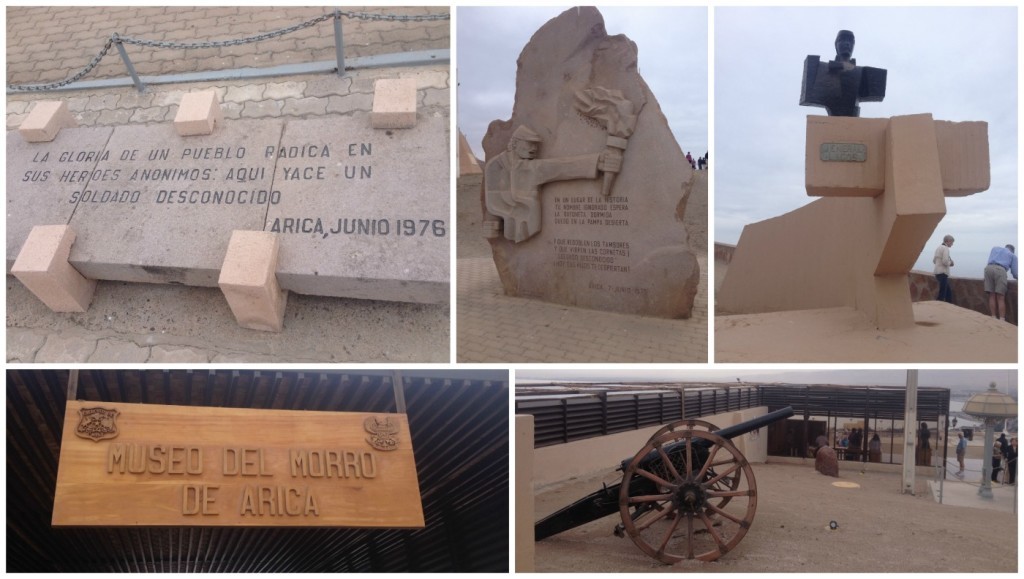 At the top there is a huge statue of Christ, can you see me? Not sure I have the same effect. 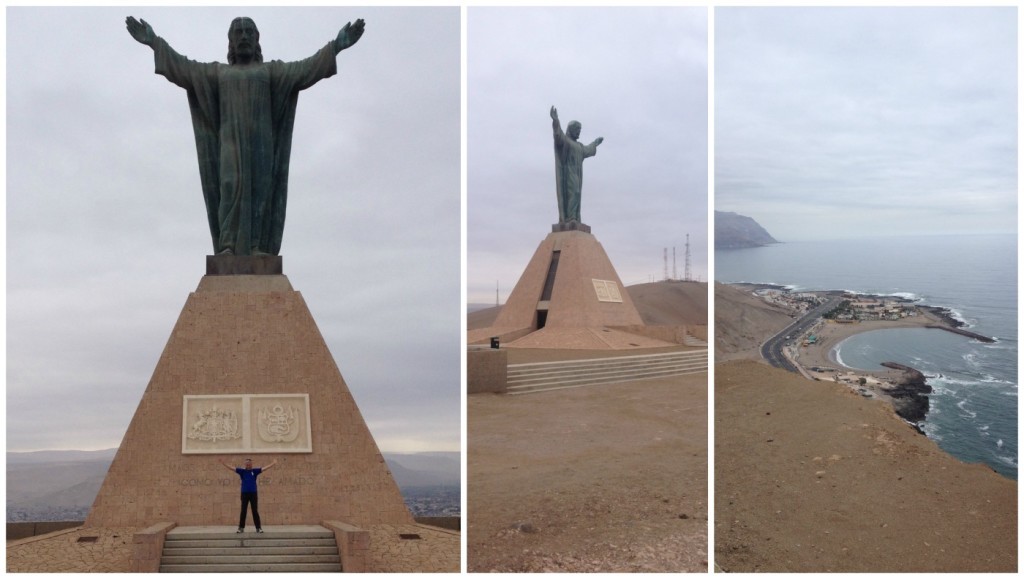 The very top is a statue of Christ

After a while and before more busses arrived we made our way back down being careful not to slip on the sandy path.

Panorama to the city of Arica in Chile

“The town of Arica in northern Chile”

Once down we walked into town, which is not far either and very easy to get to. 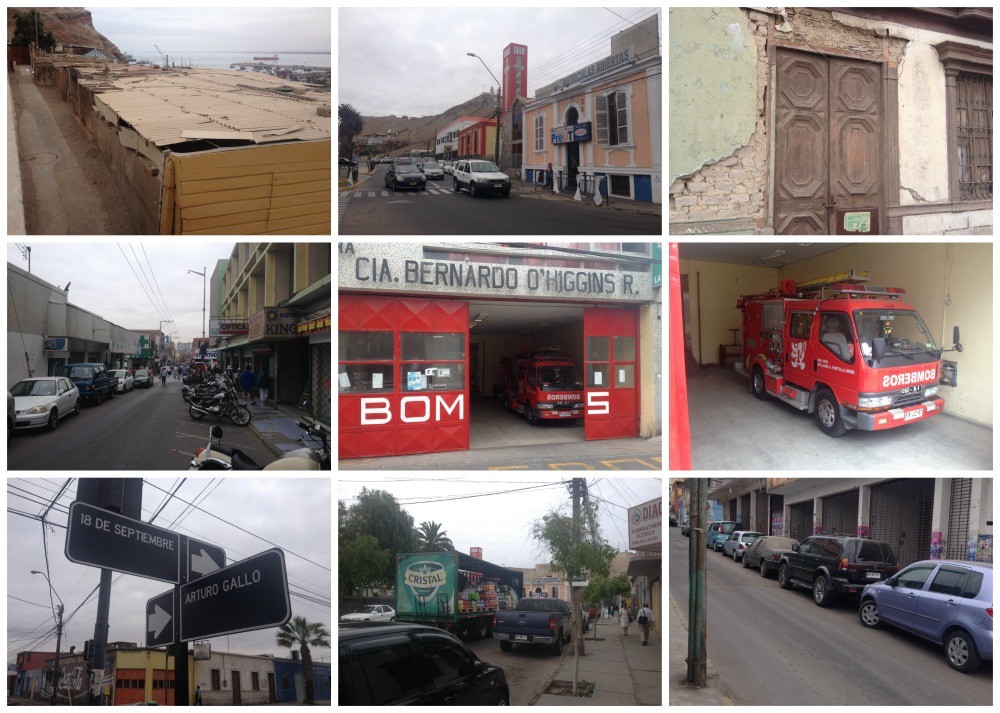 Here we changed a small amount of USD for Chilean Peso before going to buy a local SIM card for the phone. Such an easy thing to do and without even having to show any ID either.

With that accomplished we just walked around town, and found a shop where Moni could buy some credit for the phone. 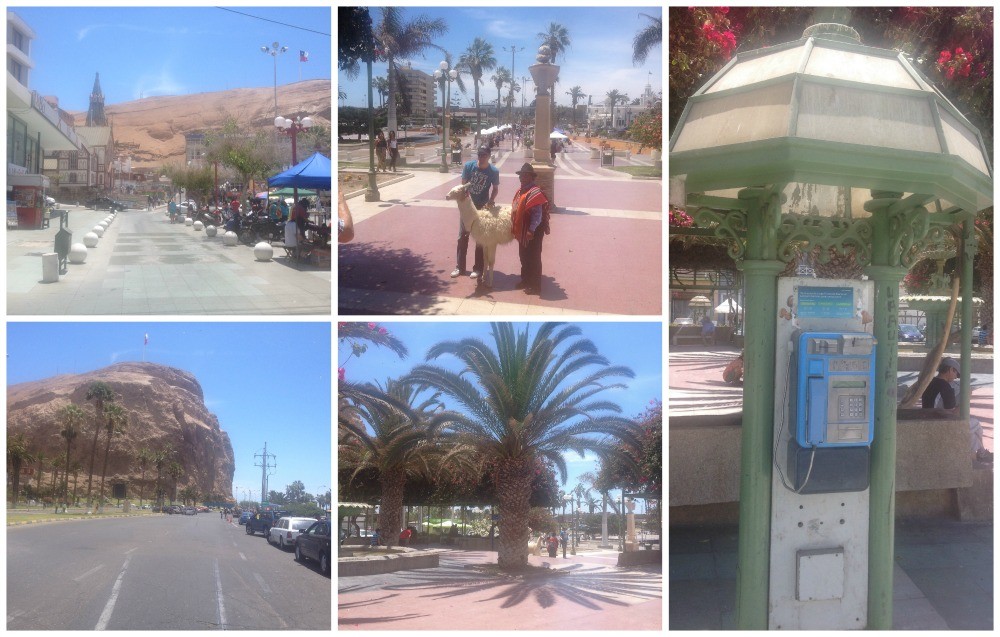 The town of Arica in Chile

Next we found a cafe with free wi-fi so we indulged in a coffee and checked in online for an hour or so. 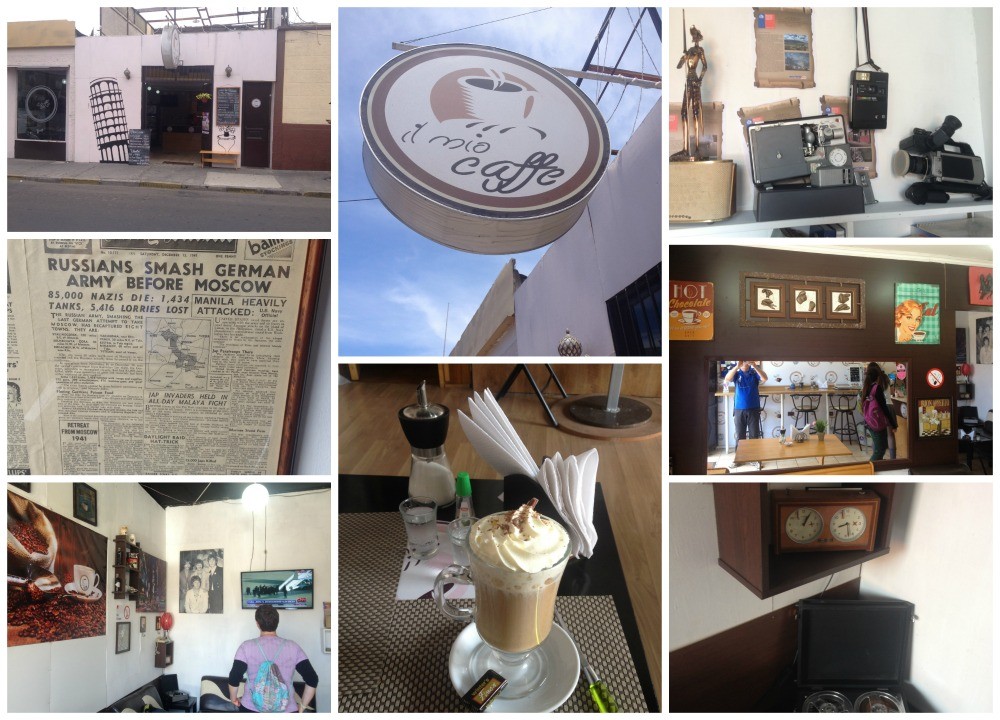 After doing a few Facebook posts and email replays we walked on some more through the main street and down some side roads before stopping at a bar to enjoy a local beer. 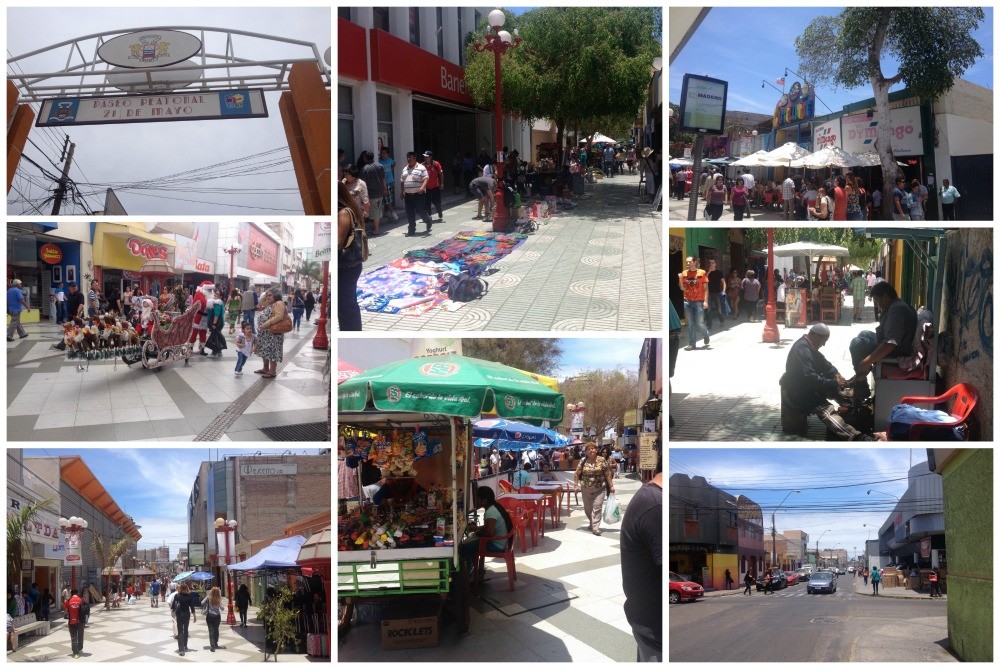 Beer o’clock… Moni actually had what the locals call funchop which is beer with fanta. I enjoyed a local drop, pure!! 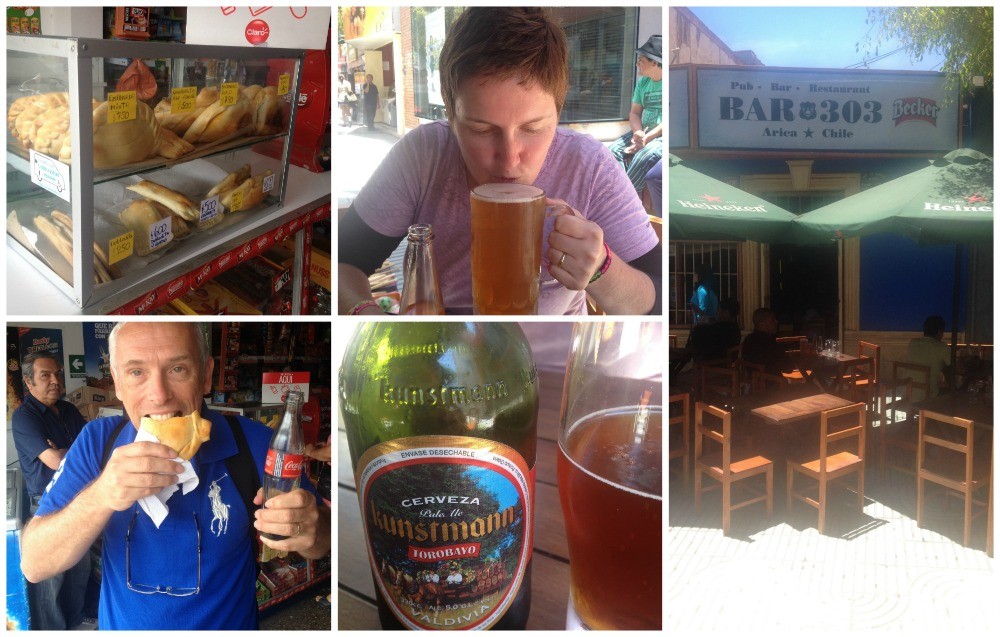 A Empanada & beer in Arica

Then around the corner we sampled a local Empanada. The Empanadas here are baked not fried and have a variety of fillings.

We tried the one filled with chicken. It was really tasty and a bit like a Cornish pasties from the UK if you know what that is.

Back at the ship we had room service sandwiches and enjoyed them while sitting on the balcony watching all the tour buses return from their respective day trips. From the ones we saw we added up the value and it was around $35,000 according to the prices of each tour. Don’t forget that the morning half day tours had already returned.

I also watched how the people actually tipped the driver and/or the guide. It was staggering to see… On average 65% of each bus gave a tip ranging from 1 dollar up to 1o with the five dollar bill being the most popular. The longer the tour the better the tips were, in both dollar value and percentage of people giving.

It was fascinating to watch, especially the way that some actually handed over their tips… hand shake with hidden dollar, nice open hold it out in front, others that got off and opened their wallets and searched we saw it all. All this was going on as the locals were entertaining on the dock, they did some dances in costumes and a band played in-between, not a patch on the sail away ceremony that we had leaving Kagoshima in Japan on the Queen Elizabeth.

Back at the ship

“The best sunset of the voyage, in Chile”