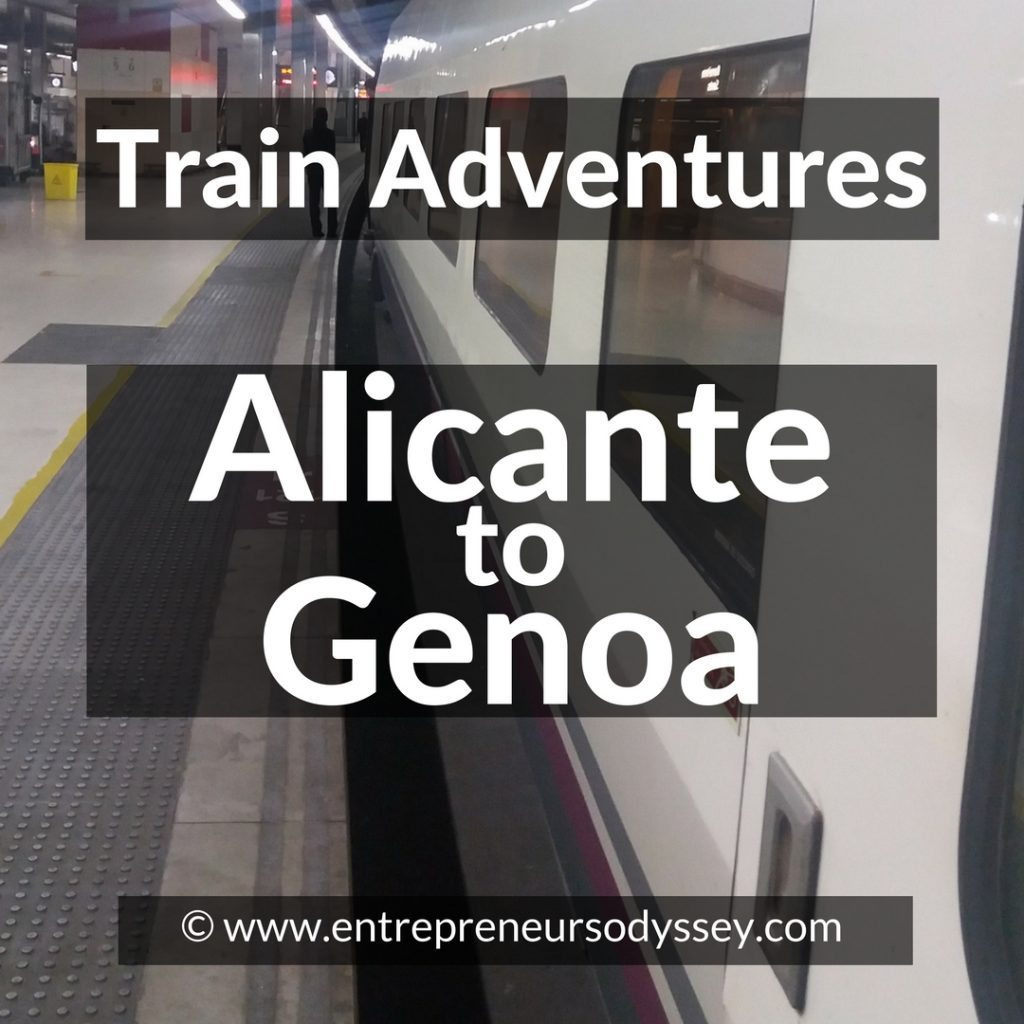 Having done plenty of research on how to get to Genoa from Alicante I decided on taking the train. You’re probably thinking why didn’t we just take the plane instead well, for us it’s not just about getting from A to B quickly, it’s about the experience and going by train certainly ads to the adventure. Not to mention the hassles at airports plus we are just over the 20kg limit per bag so the price goes up!

Flights do go from Alicante to Milan direct but not Genoa and for our dates it needed an overnight stay in a hotel in Milan before heading to Genoa the following day and this was a deciding factor as well having to stay at the airport hotel.

The Adventure From Alicante to Montpellier via Barcelona

With our bags all packed and ready, we slept pretty good the night before and woke to the alarm at 4.30am. Leaving the apartment all nice and tidy at just before 6am to catch the local bus to near the central market in town where we changed to the airport bus that stopped at the train station. Moni donated our excess bus passes to some local as we got off 🙂 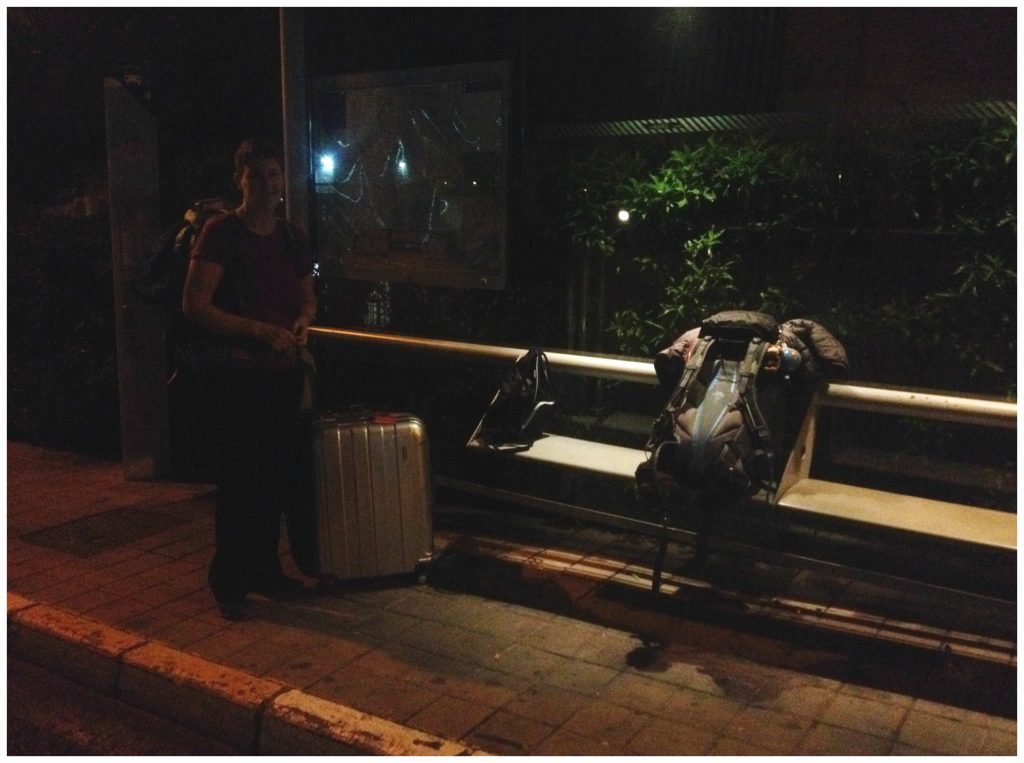 6am waiting for the bus in Alicante

The bus connections were easy and very good which left us very early at the train station so we enjoyed a coffee while people watching before our train and platform showed up on the departures board. The station has a security point which I was watching, all very relaxed indeed and to get to our platform we didn’t even have to go through security, what a joke!

The first leg of the adventure was Alicante to Barcelona, here we had a 3 hour wait for the next leg to Montpellier. Our snacks kept us going most of the way but in Barcelona Moni had a hot lunch at a restaurant in the station. It’s a total rip off place but the other choice was the golden arches 🙁

The time passed slowly waiting here but eventually we could make our way to the platform and board the train once it arrived. Our seats were right by the door to the carriage and our bags stacked nicely just behind us. We had a coffee a from the buffet and I enjoyed a small bottle of liquor which I had with me.

For our stay in Montpellier I had booked a hotel that was very close to the station, ideal really considering it was just for the night. Arriving at night everything becomes much harder to find, and before exiting the station we asked a local for the main entrance and followed the directions, along with the maps on Moni’s phone we ended up walking in circles pulling our luggage.

I knew the hotel was in walking distance and couldn’t for the life of me understand why it was taking so long to find our place. Eventually after asking at another hotel directions we arrived at our place 45 minutes later 🙁 the not so funny thing was we’d taken the wrong exit from the station which literally was a 5 minute walk over the road!

Needles to say that by this time wifey was mighty peeved, thankfully our room on the first floor was quite nice and had a bath tub which I fixed with plenty of bubbles and my princess had a nice hot soak & a cup of tea.

As you can see, the bathroom had plenty of room and a nice towel heater. This is the rest of the room and kitchenette. 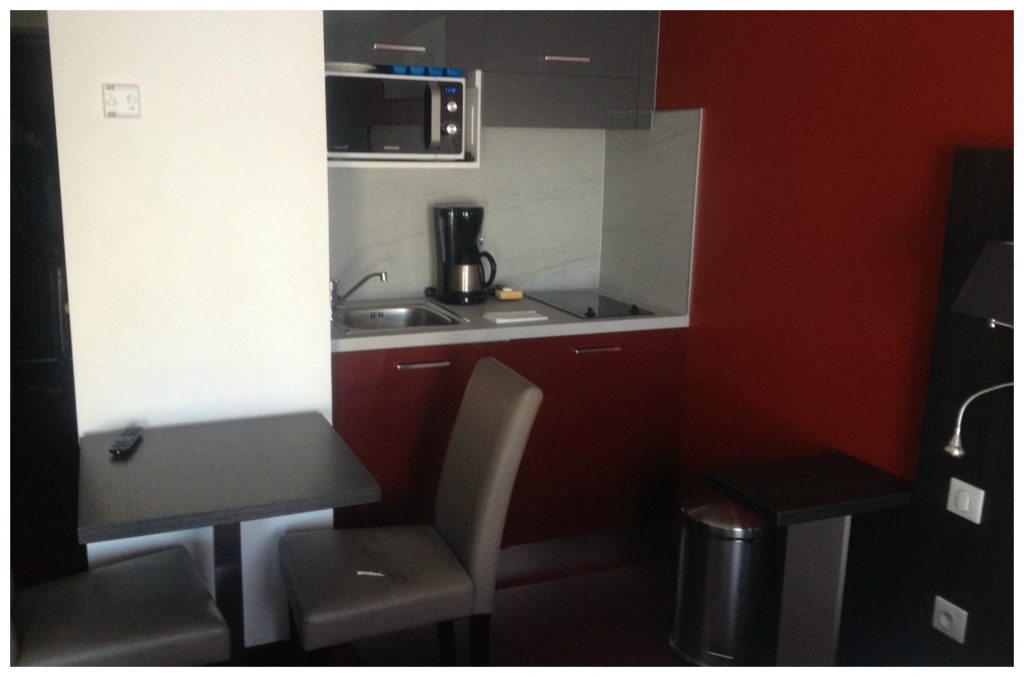 Appart Hotel Odalys and the train station in Montpellier

I took a couple more photos from the hotel before we checked out and walked across to the station. 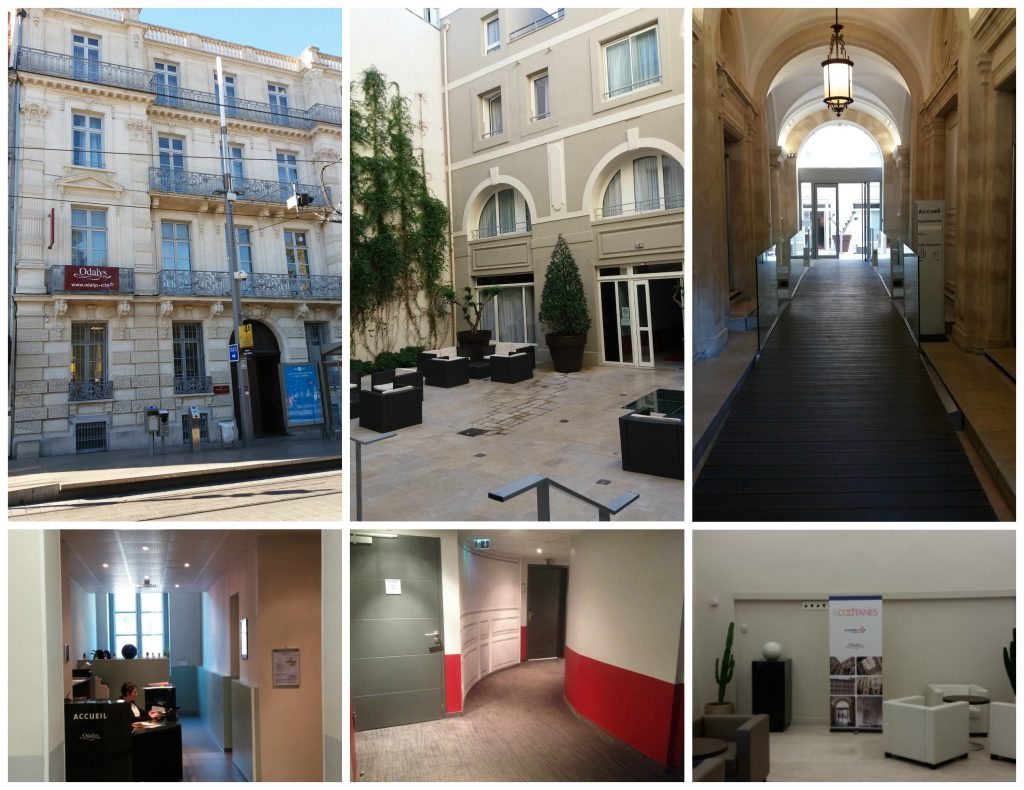 Train Adventure From Montpellier to Genoa via Marseille & Nice

Check-out was at 11am which was great as our train left just after 12pm. We woke to the alarm and took a walk into town which is basically just along the road, away from the station that we could now see clearly how close it was in daylight. The rear exit took us the long way around the night before. 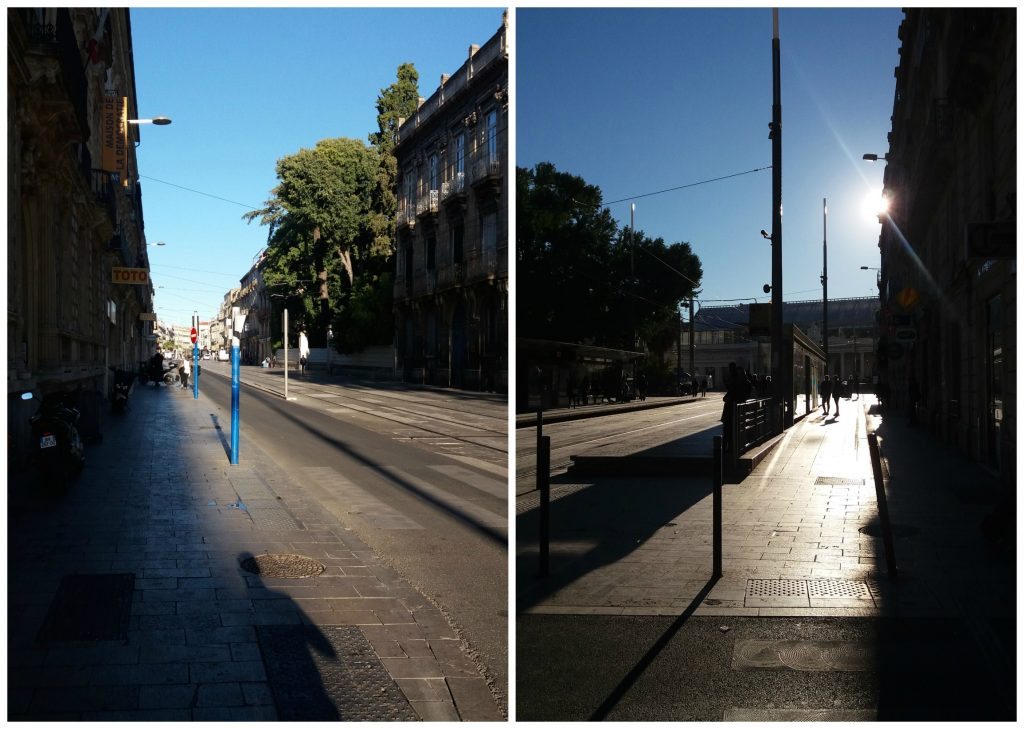 A few hours in Montpellier

Not many places were open close by and walked a while before we decided on one to enjoy some breakfast, nothing fancy, toast jam & butter, orange juice and a coffee. 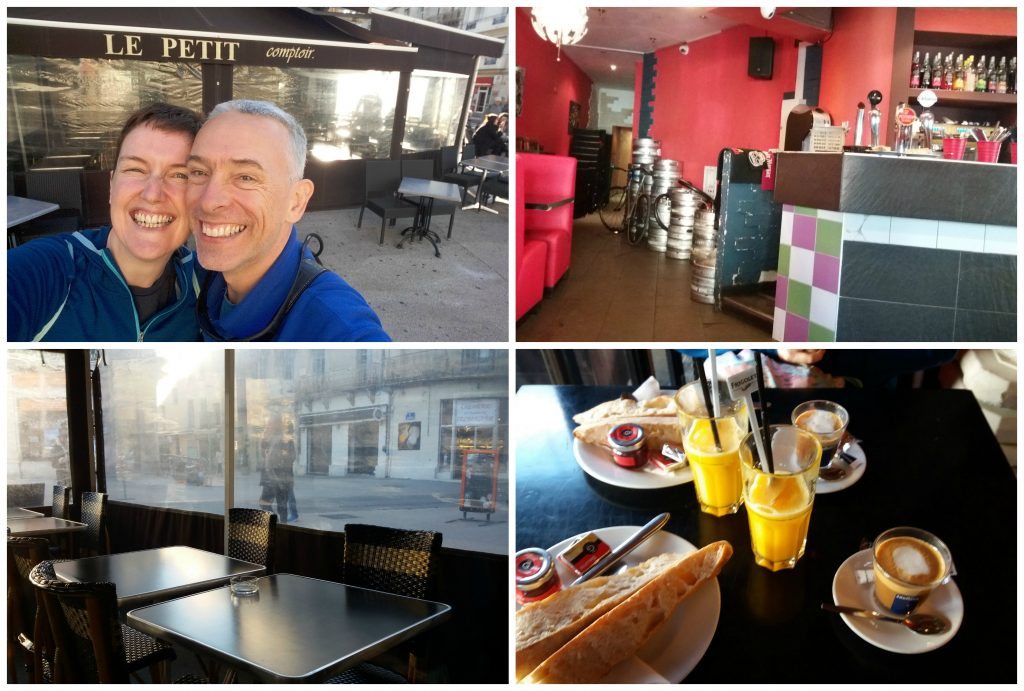 Even though the sun was out, it was still pretty cool especially in the shade as we walked around the town for a bit. 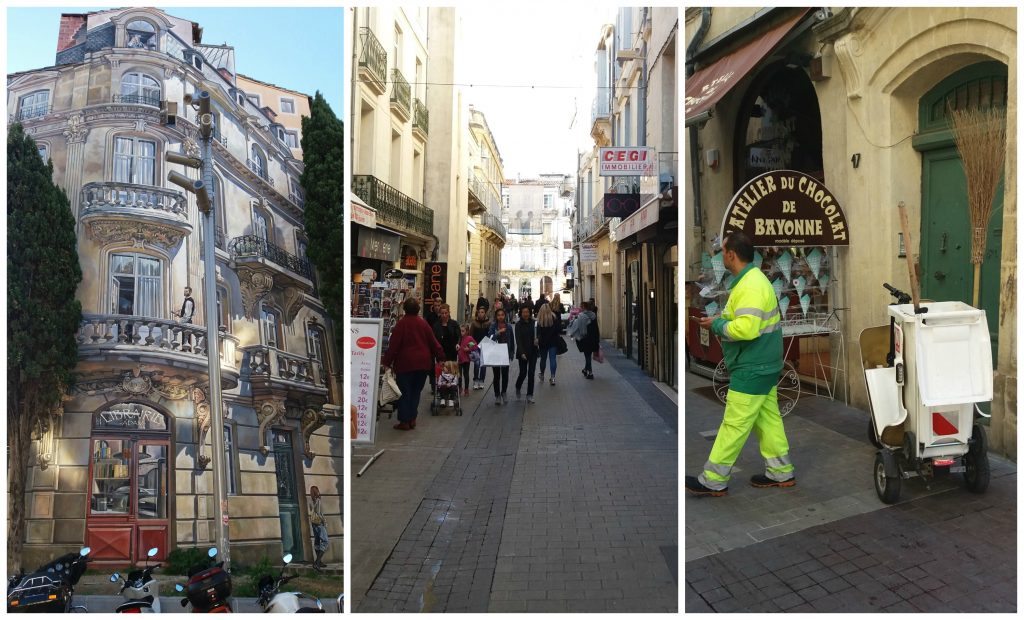 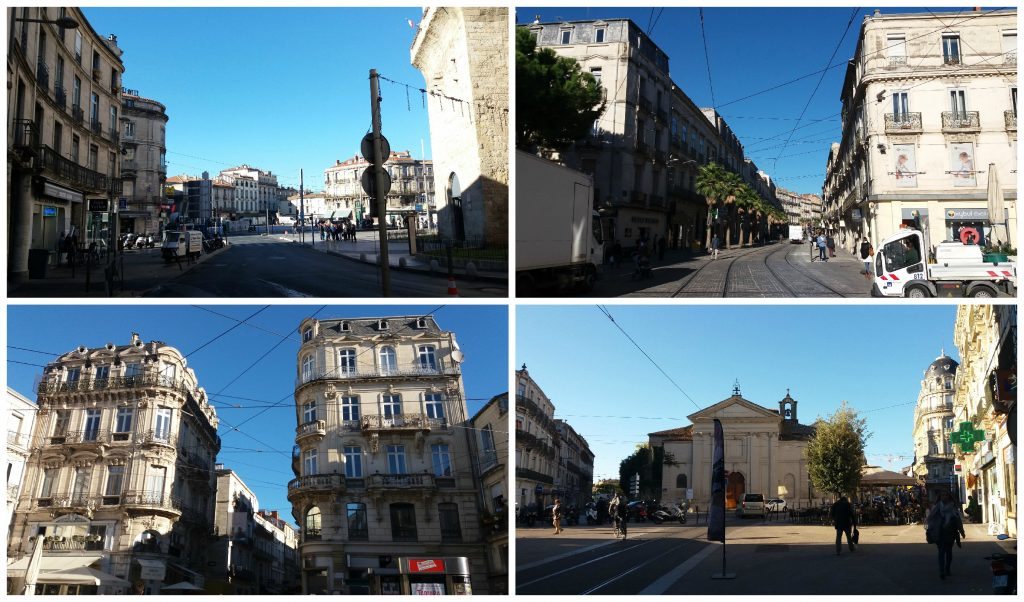 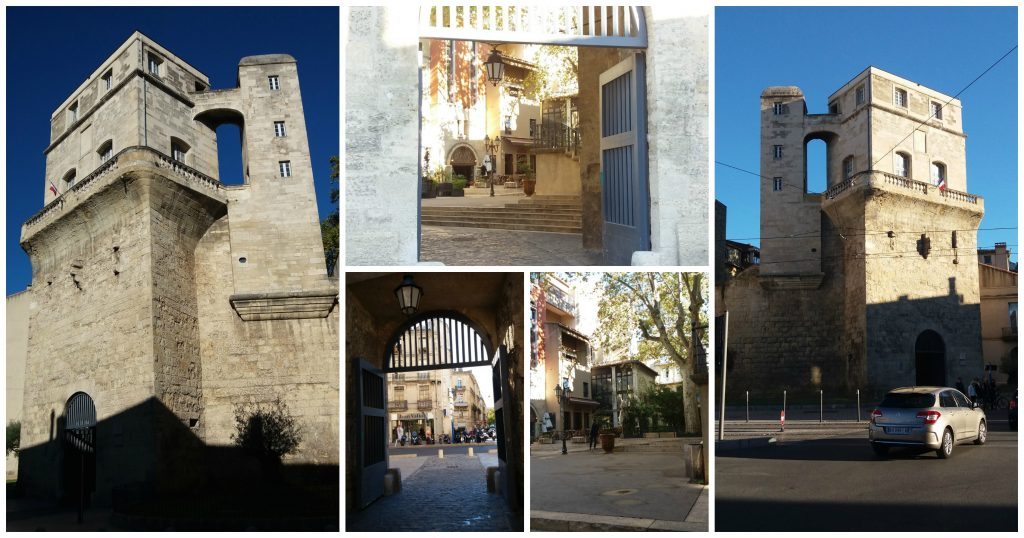 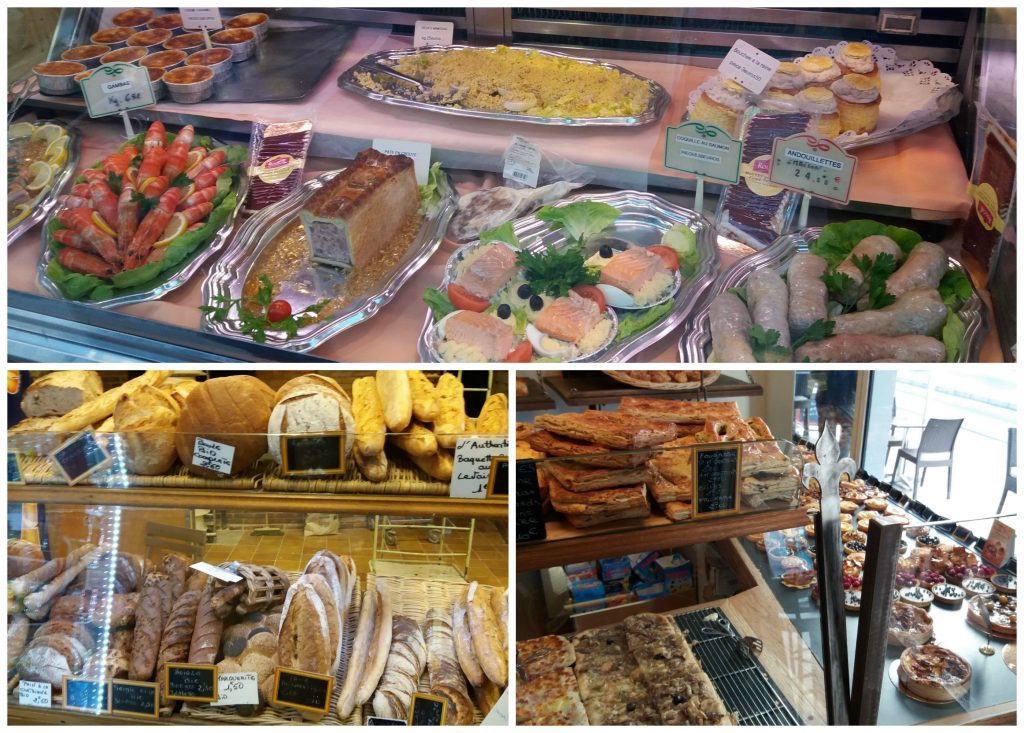 I bought some items to fill a baguette to cover me for the next journey to Genoa and Moni still had some snacks left.

Back at the hotel in our mini kitchen I prepared my snacks before we checked out at 11am and walked across the road & tram lines to the station with ease. 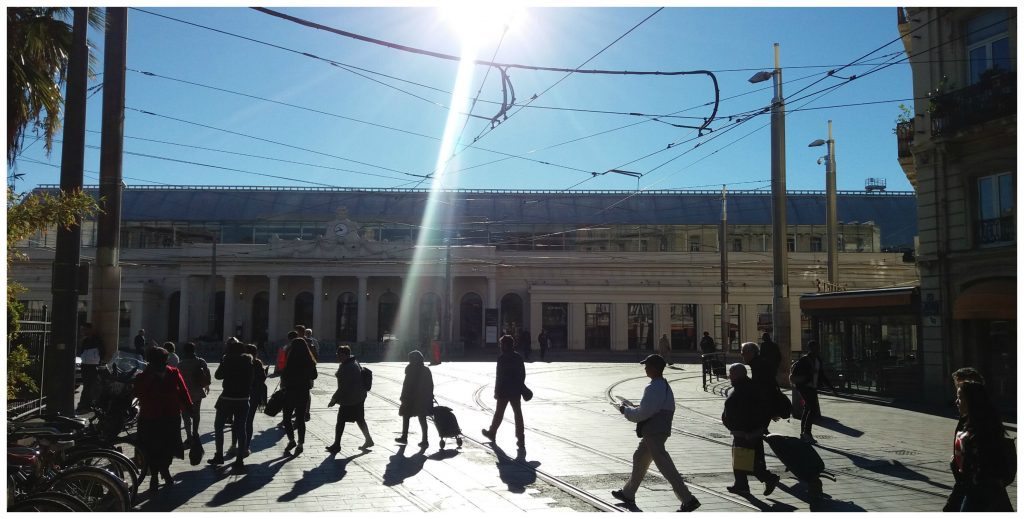 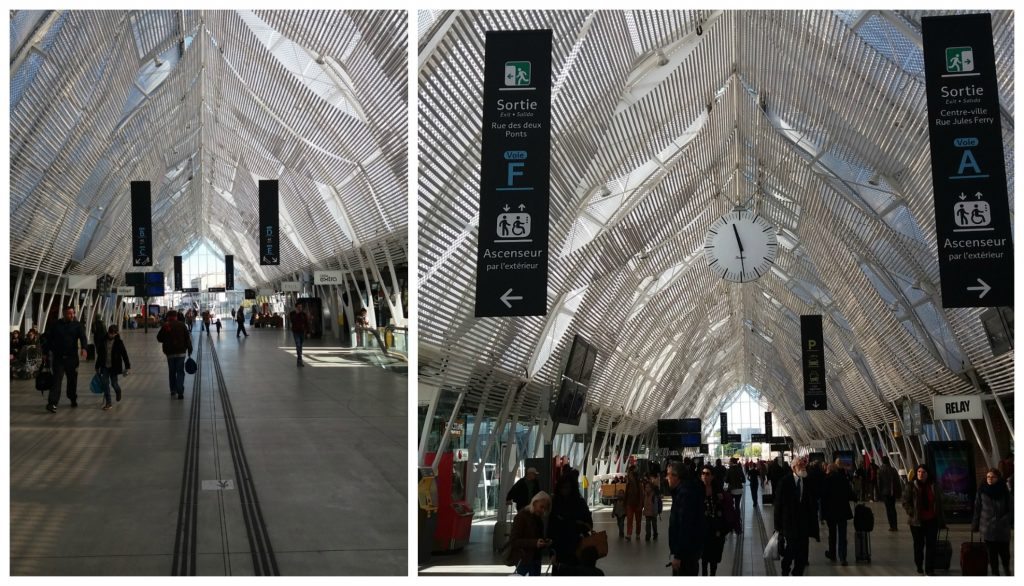 A quick note about the various train tickets

I bought my train tickets via the Loco2 website which is really easy to use and the prices are all in pounds. For this trip we had a few paperless tickets a couple to print out and a couple to print at the station like here in Montpellier. 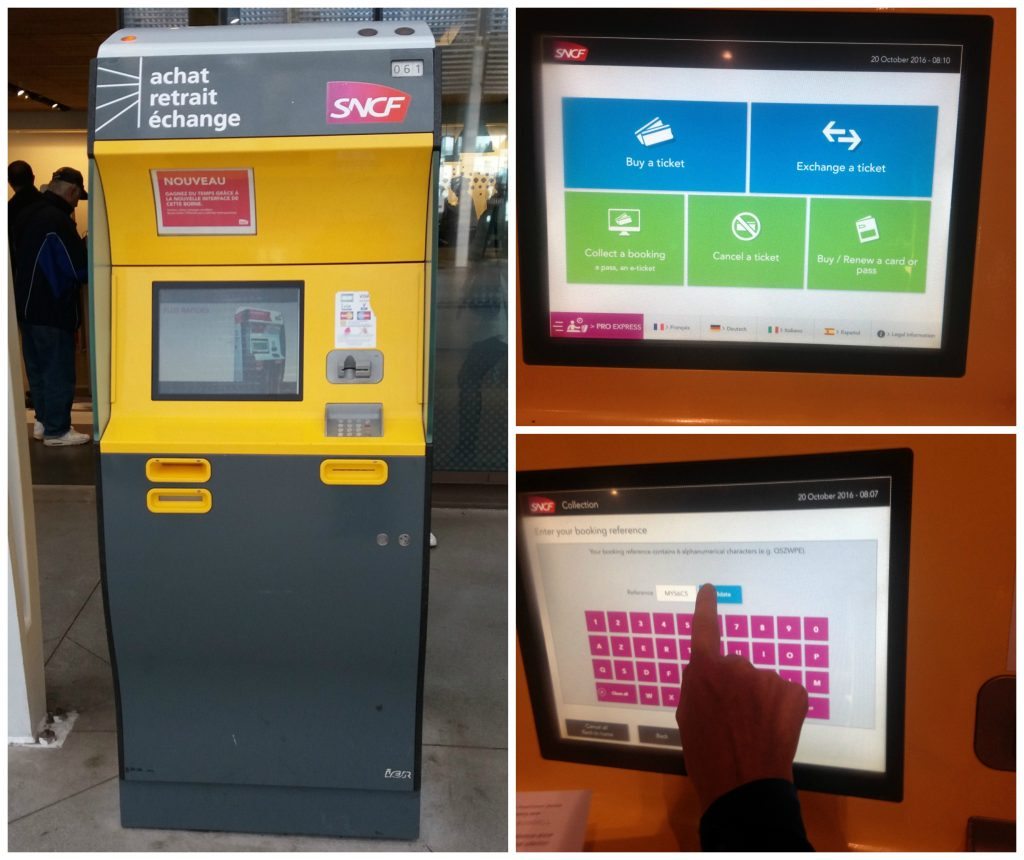 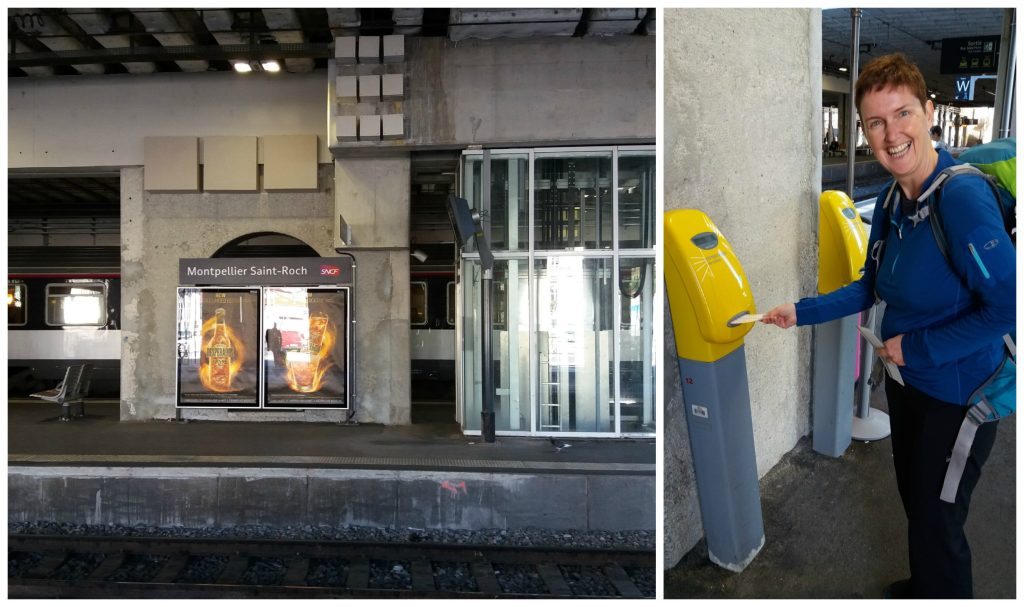 We waited for our train to be announced and found the platform with ease. It was a short but sweet stay in what looks like a very nice place, one that we would certainly like to visit again 🙂

The train we got on had old style carriages and very little space for luggage, basically only one bag would fit. For some people, trying to lift their heavy bags up to the luggage rack above was impossible. This train brought us to Marseille. 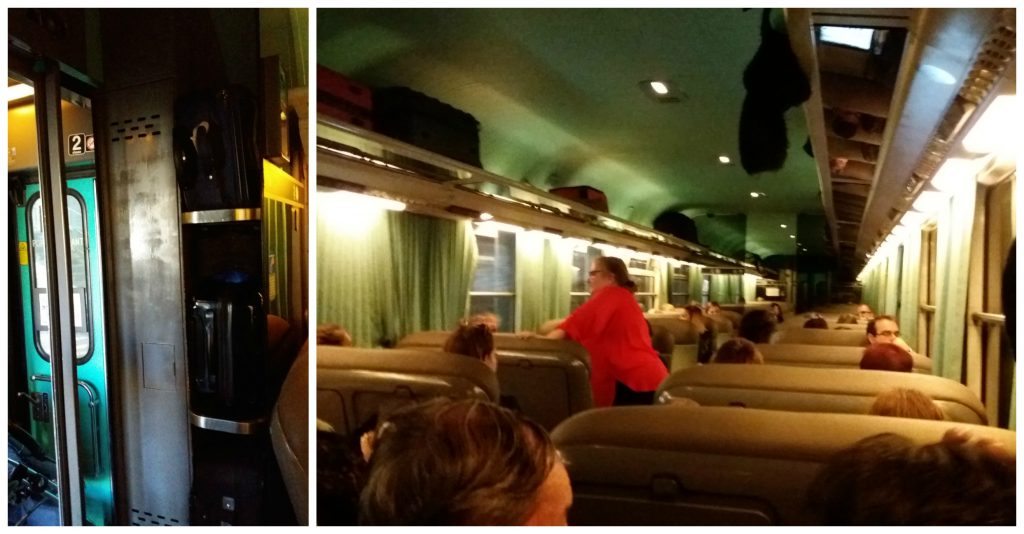 Train from Montpellier to Marseille

This next leg of our journey was between Montpellier and Nice with a change in Marseille. For the part leaving Marseille we didn’t have allocated seats and after checking with a conductor it was clear that there were no allocated seats. 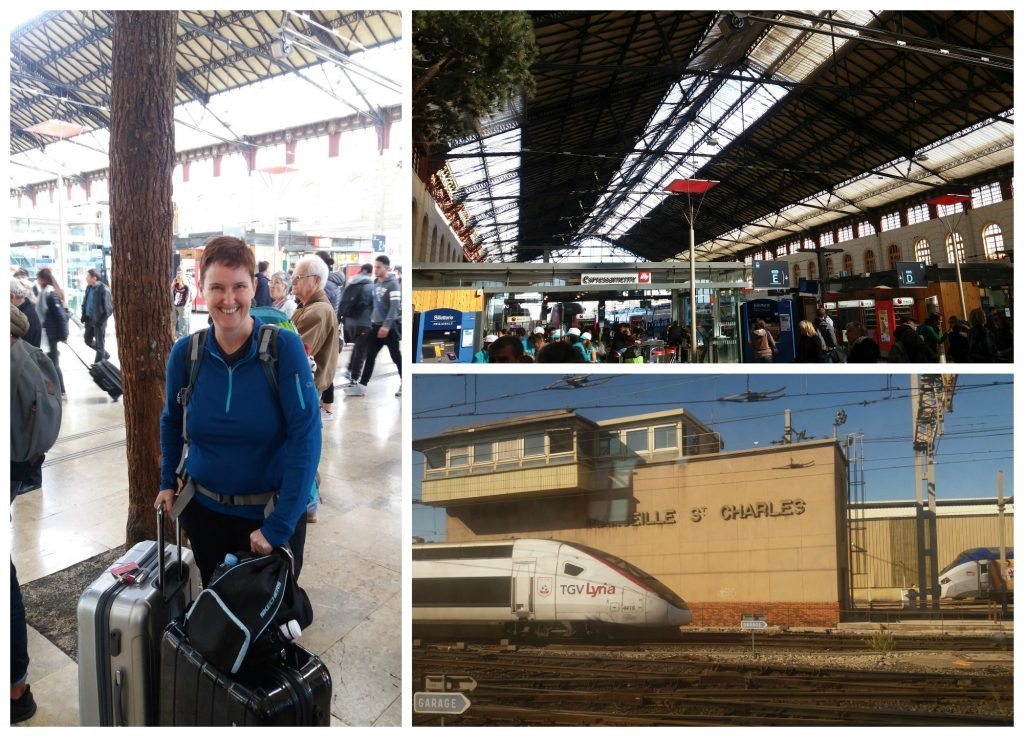 As soon as the platform was announced we hastily made our way finding a carriage with two seats next to each other. By the time we were leaving the train was over full and many people had to stand, fortunate for them after about an hour the next stop freed up some space. 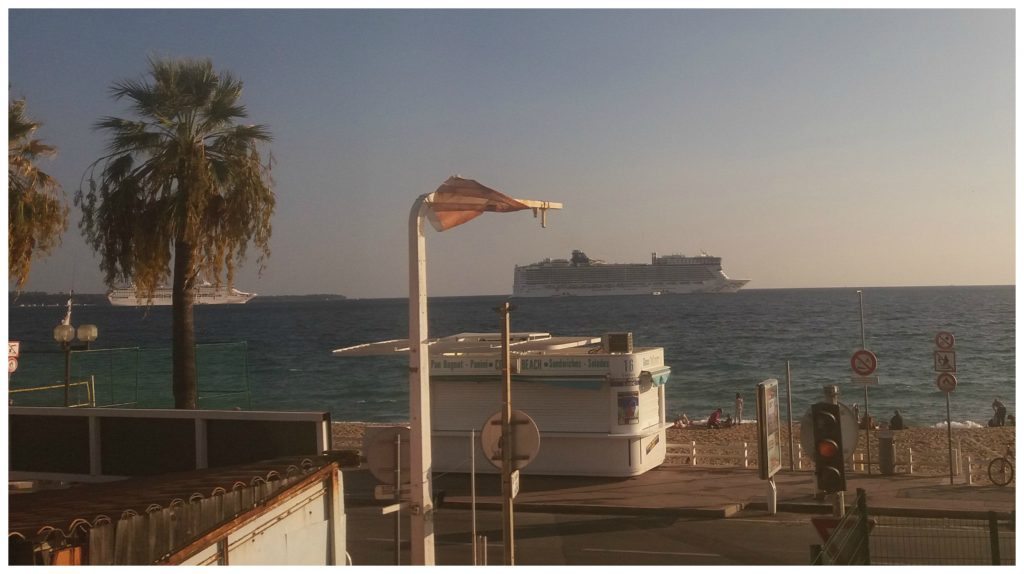 The south of France coast near to Nice 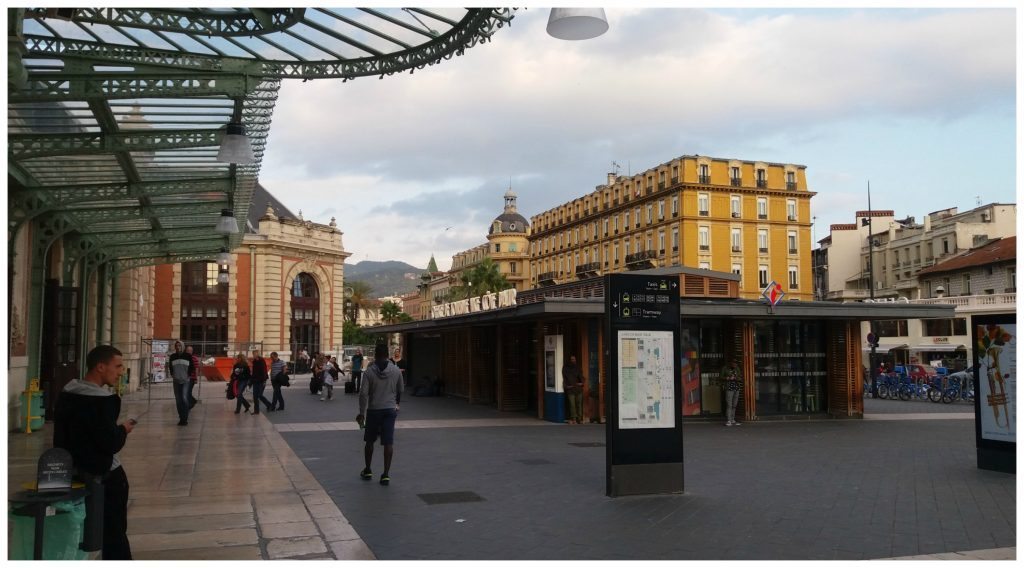 In Nice we had another change with an hour to wait. This station had no lifts but stairs which are such a pain to navigate but we managed. Once we made it to the main entrance it was just a matter of time before the platform was announced and we battled the stairs once again to our platform.

This train, like all the others left on time and arrived within a few minutes of the schedule. 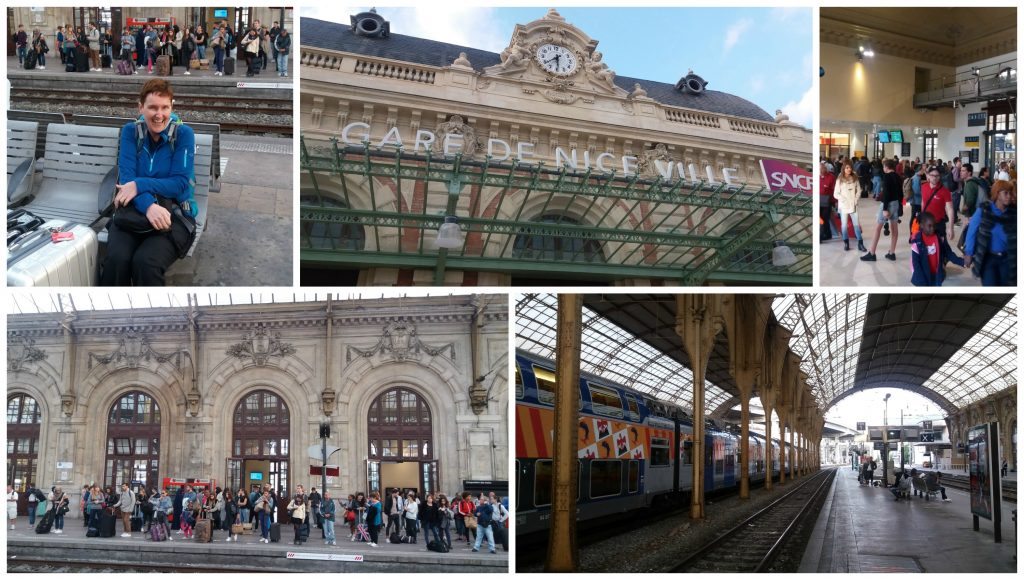 Final leg on a Thellō train to Genoa

This trip was on a Thellō train which is just a different train company with limited routes.

The four of us enjoying the Thello train journey

It was a very decent carriage with a small but nice buffet car serving Illy coffee, it must be good & it was. Our carriage was nearly empty this trip and a couple of different conductors checked out tickets also at Ventimiglia the customs control with dogs walked through the train.

It was great to arrive in Genoa that’s for sure and we were looking forward to a nice bed to lay down. It’s really strange that traveling is tiring even though 90% of the time you are sitting.

Thankfully there is only one exit from Genova Piazza Principe train station. Once again I had booked a hotel that was only a few minutes walk away, hopefully 🙂

A quick check with a taxi driver standing at the entrance to the station confirmed that it was only a matter of a couple of minutes away so off we walked pulling our luggage over the not so even pathway, eventually I kept to the road as it was easier.

The walk is literally 500 meters to the Continental Hotel.

Home away from home

The lady at the reception welcomed us with a friendly smile as we checked-in. Once she’d completed the formalities she explained that we had been upgraded, not from a standard room to a king room, but rather from this 3 star hotel to the sister hotel next door… the five-star Grand Hotel Savoia. 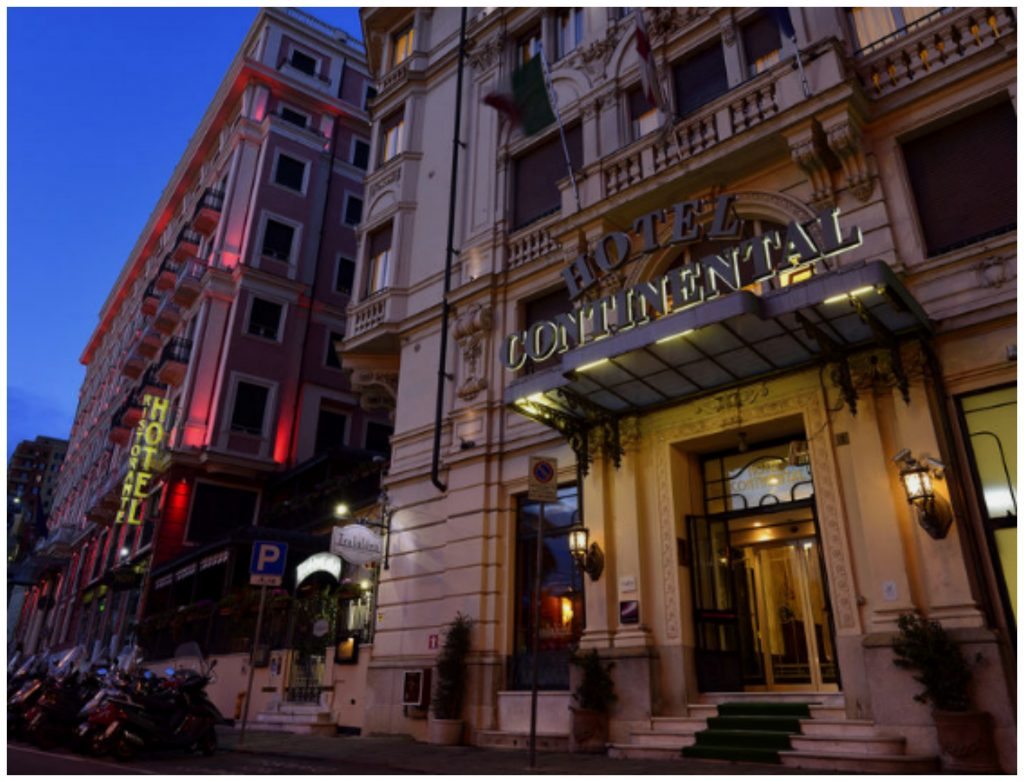 Hotel Continental with the Grand Hotel Savoia next door

As you can see from the Grand Hotel Savoia photos we had a very comfortable room indeed, just what we wanted after the two long days on the trains. We settled in and enjoyed the huge bath tub, tea’s and bottled water before a relaxing night’s sleep in the king sized bed full of fluffy pillows.