Formia is a quiet town on the coast of Italy just an hour north of Naples.

I decided on Formia as our next place to stay as it was reasonably close to Genoa where we would be joining our MSC Poesia for a 7 day Mediterranean cruise.

With Formia being on the coast and reasonably southern I thought it would have a pretty decent climate over winter. Brrr, I was a little off.

It wasn’t bad but we certainly would have liked it warmer, and next time I will have to chose a better place.

Having said that, when it was pleasant outside we made the most of it and walked around the area as well as taking a couple of trips to the neighbouring town of Gaeta.

Getting to Formia Gaeta

If like us, when visiting Formia or Gaeta, you will probably arrive by train. The Formia train station is slightly above the town and has some decent views. 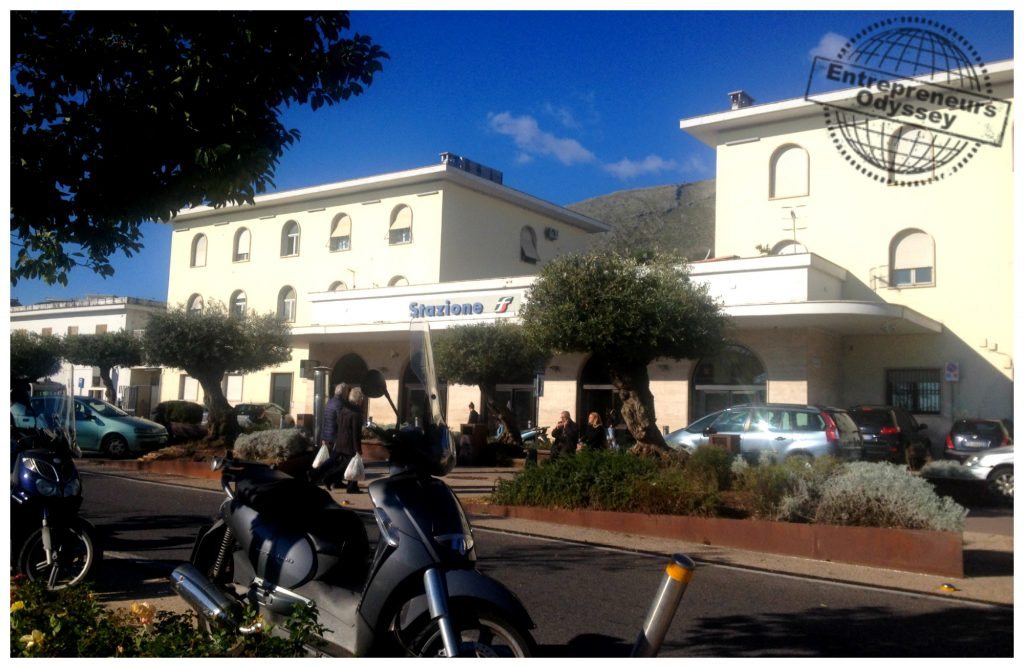 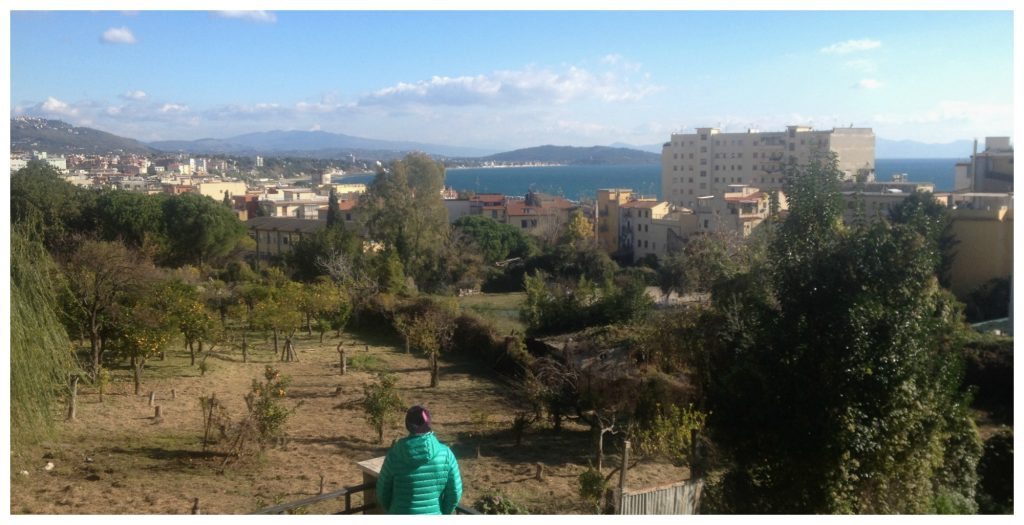 It’s a short walk down to the town from here, probably not ideal going the other direction as there are quite a few steps.

Some images from the buildings in Formia 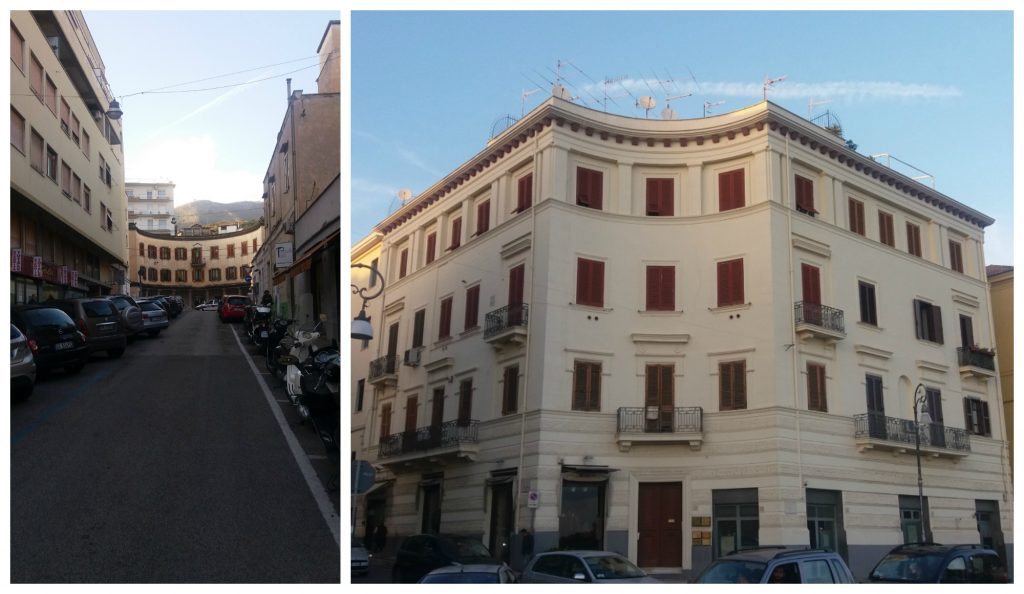 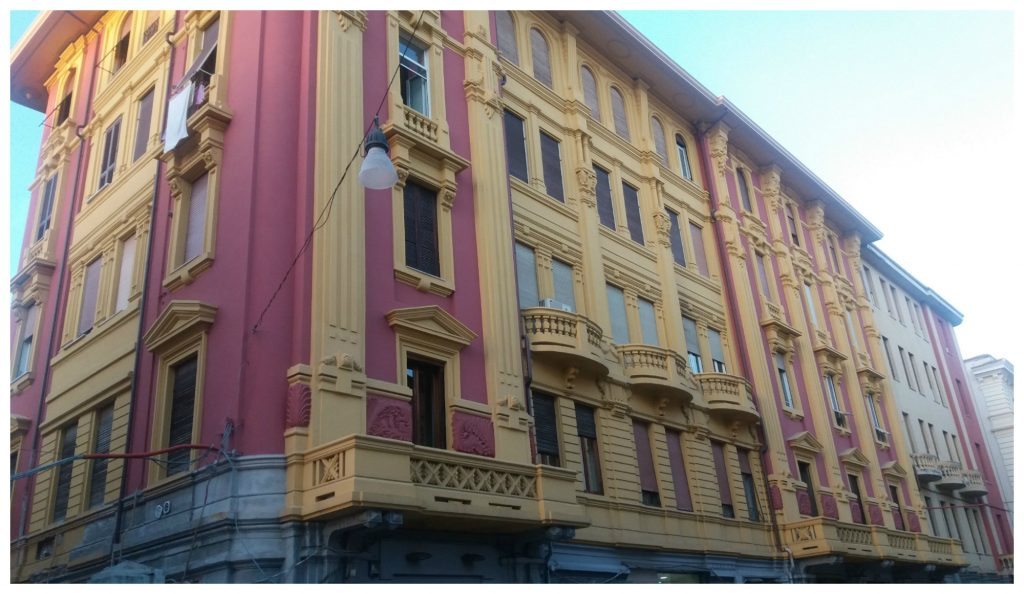 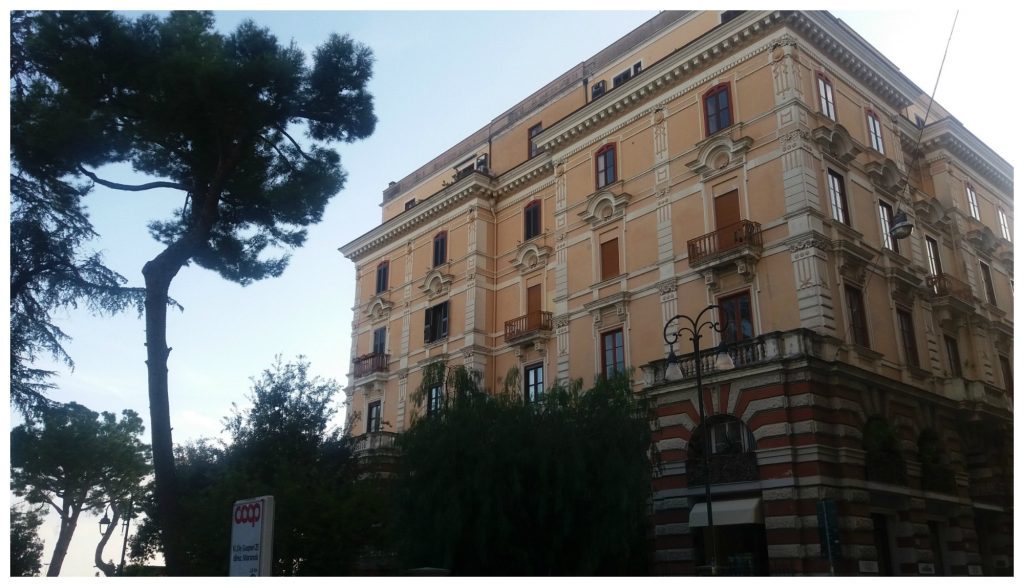 I found that the town was kinda split in two. One part with the train station and shops, local market and port. The other with more beachfront and less shops, more residential. The later was the area where we were staying in Formia.

The main town has grown considerably from an old fishing village as you can see from this photo below. The cafe where this menu is from (Bar Del Mare) used to be pretty much a waterfront business. 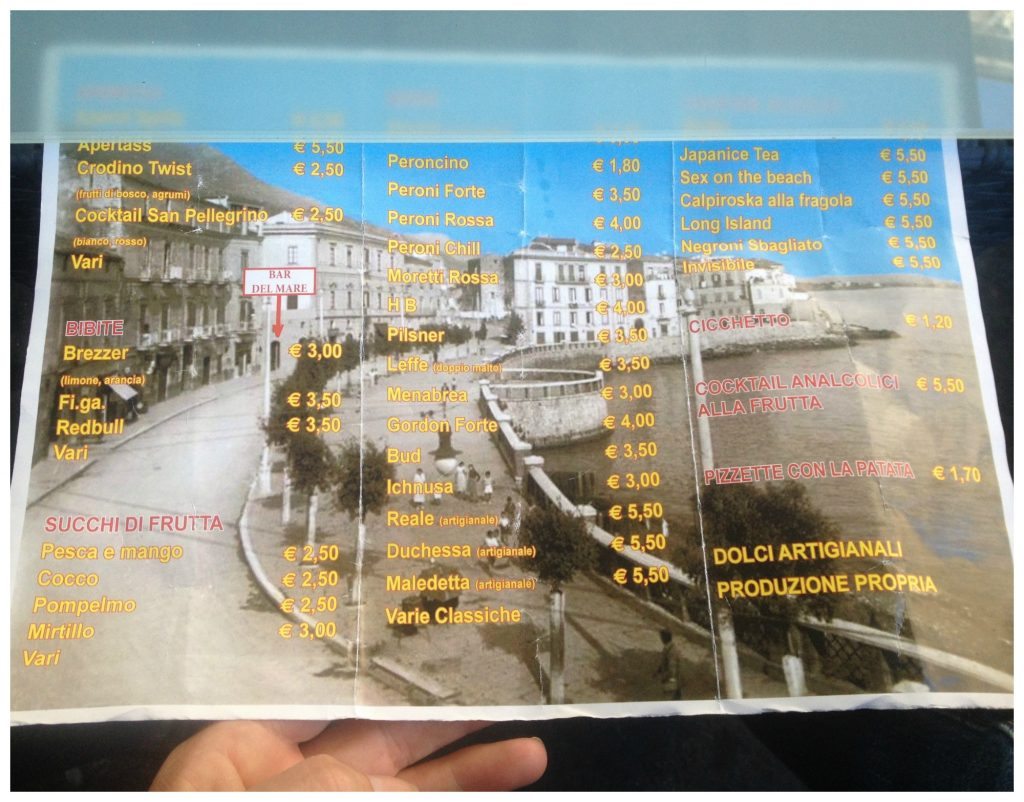 Old photo of Formia years ago

Today the entire area is a huge car park and market with the main road even further to the right of this photo. The building in the middle of both photos is clear to see the same one. 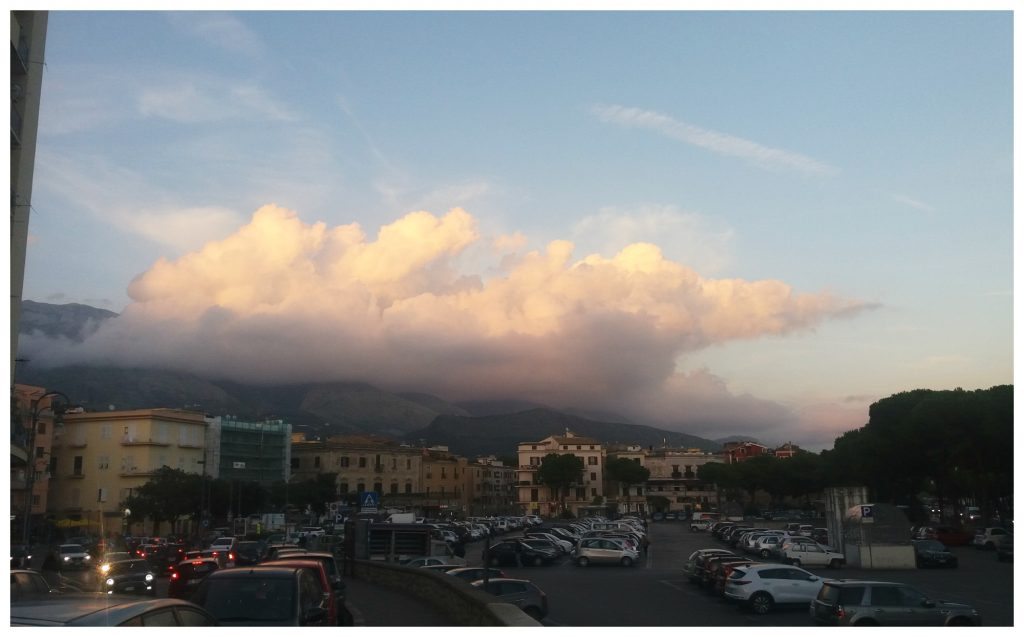 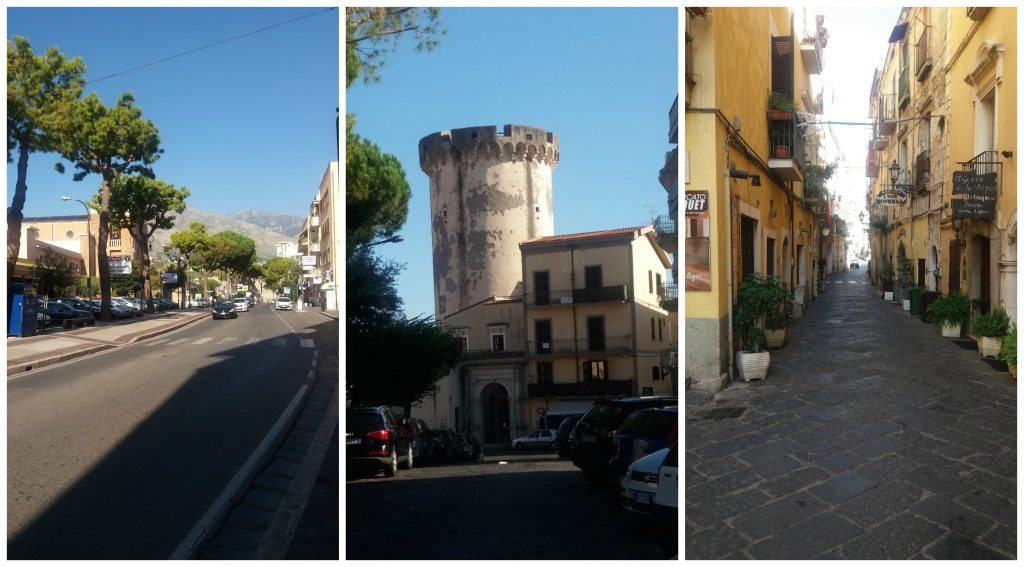 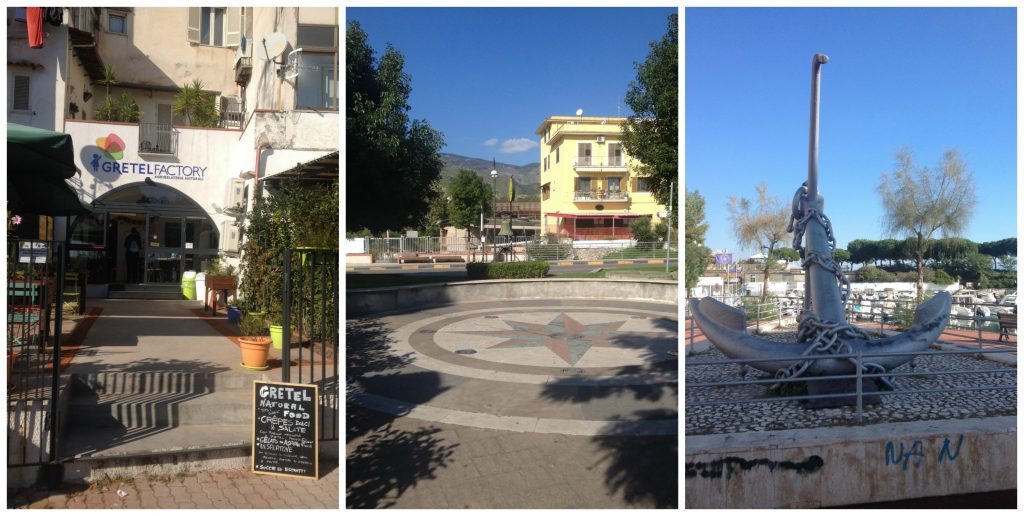 Formia is a small town and not one that I could imagine being on many travellers wish list. Having said that, it does have a certain drawcard in that it’s close to the islands of Ischia and Capri. Moni and I had planned on visiting them but due to Moni not feeling well for some time and the weather not to our liking we have postponed this adventure for a future date. 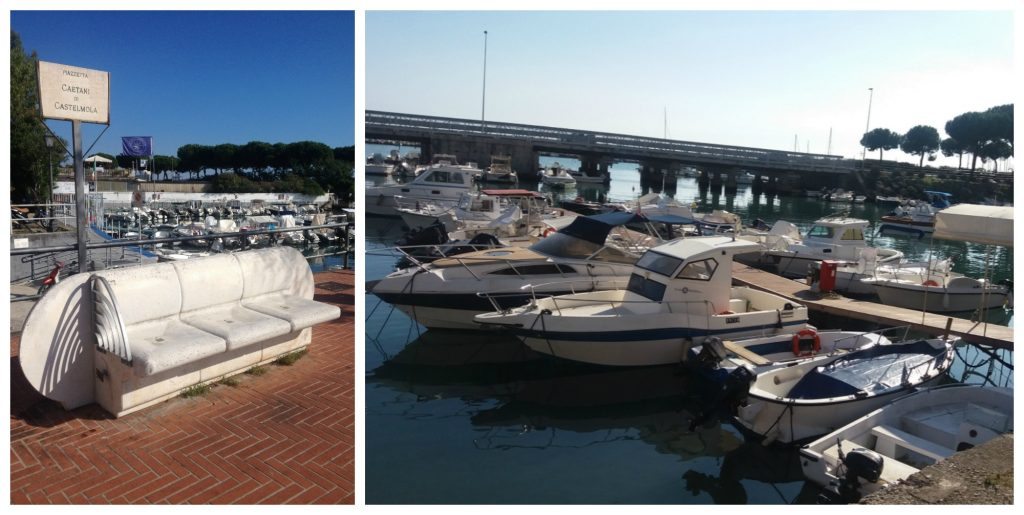 Boats in the harbour of Formia

You can catch one of the boats from the port in Formia over to Ischia & Capri. 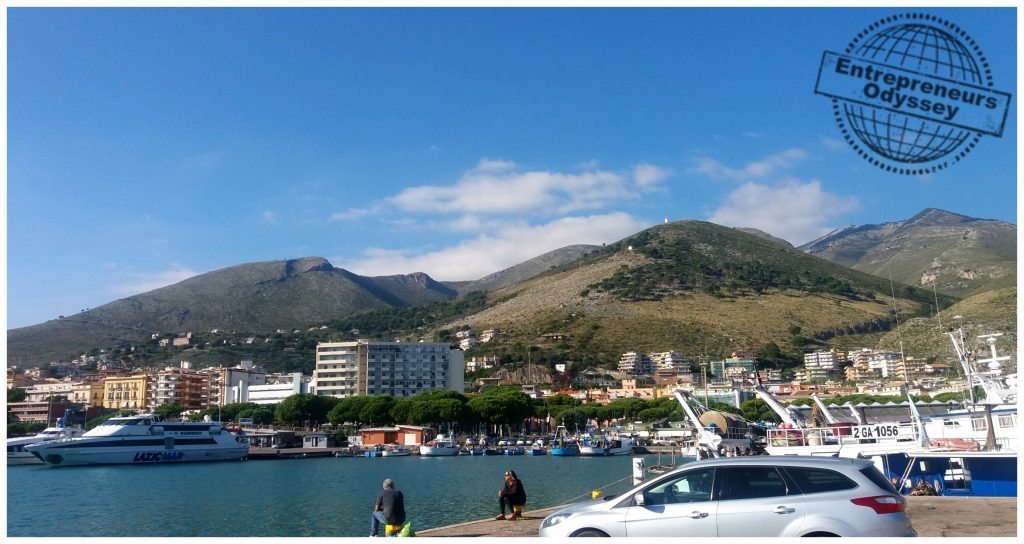 The port in Formia

To the right of the port, continues the coastline. 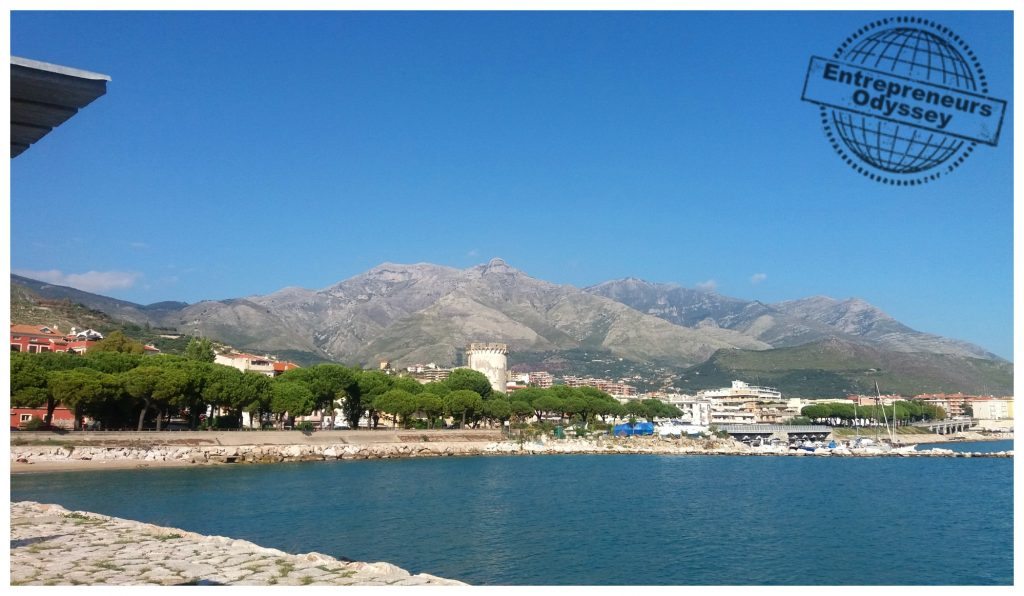 The coastline doesn’t compare to the costa blanca by any means but on sunny days is worth a visit. 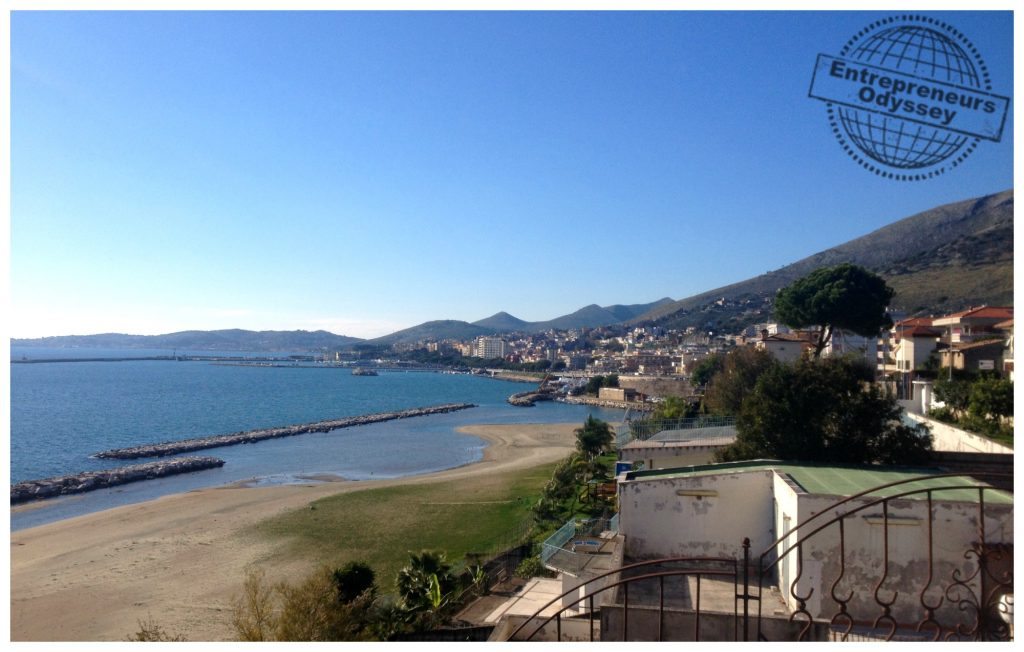 We took these photos during a walk after having coffee on a fabulous day. 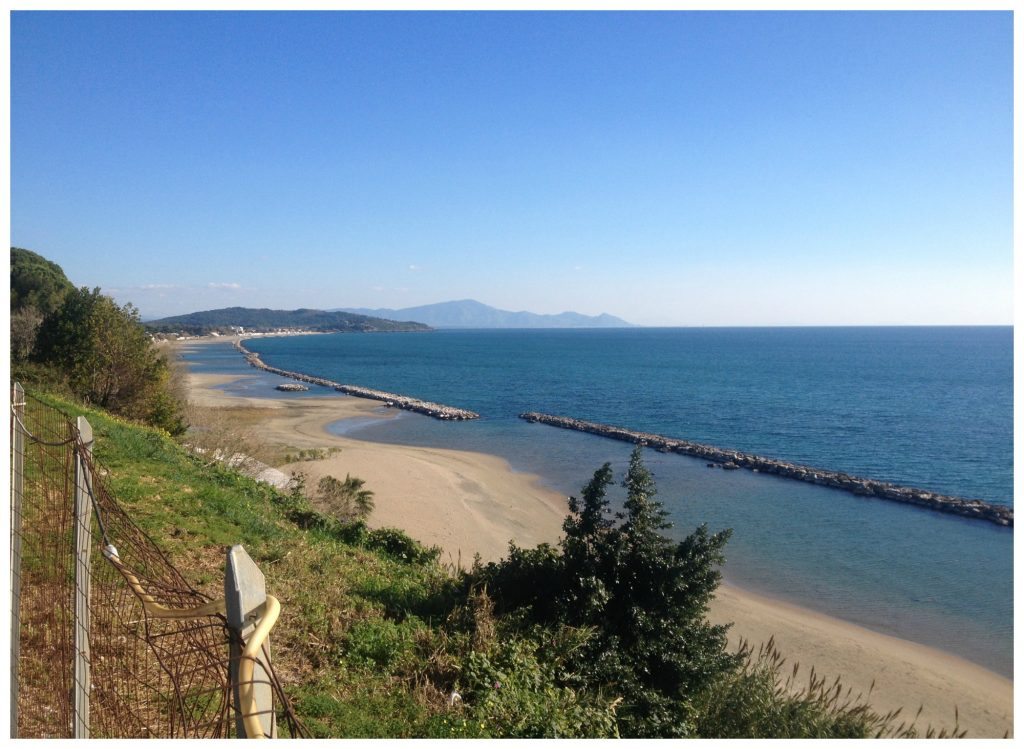 The coastline from Formia

From above you have a couple of entry points to walk down to the beachfront level. 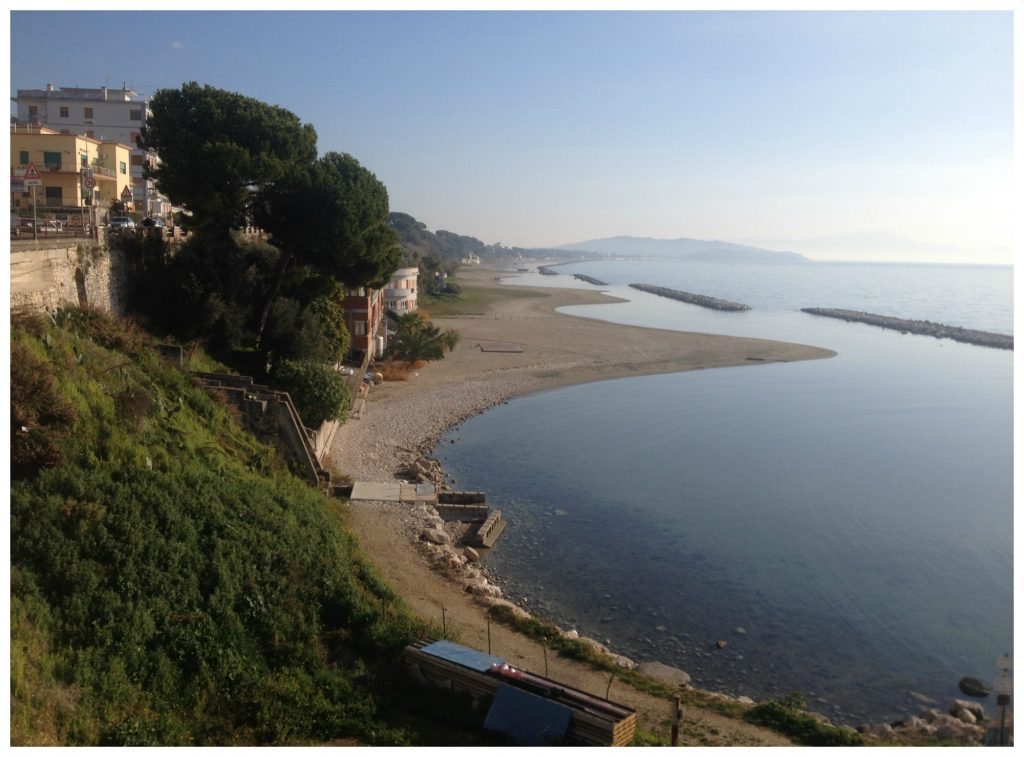 The bays along Formia waterfront 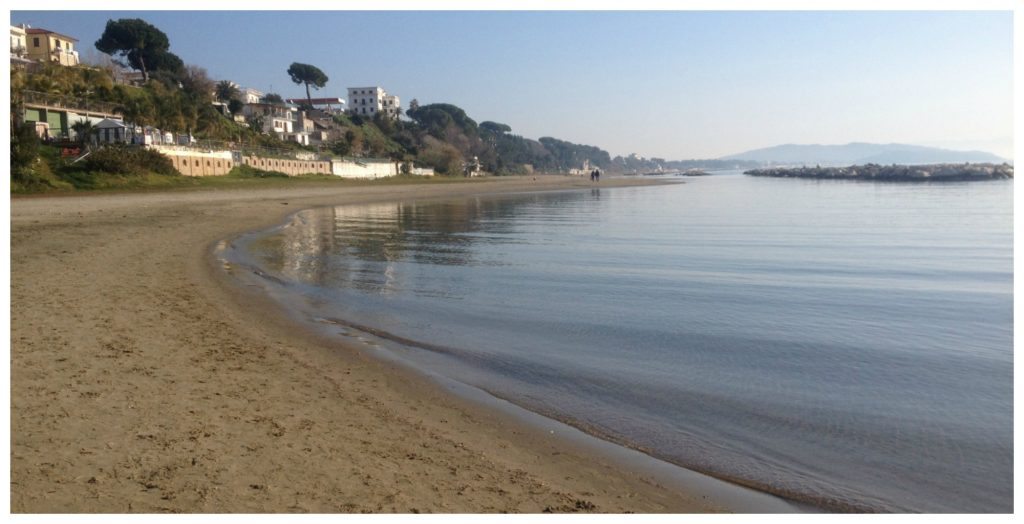 I have no idea how this place would be in summer, but the water is very clam and the bays are protected by the rock walls all along the coast.

Our favourite place for coffee was Bar Pasticceria Amedeo, not because it was the best, it was just best situated on our way to the local supermarket where we did our shopping three times a week. 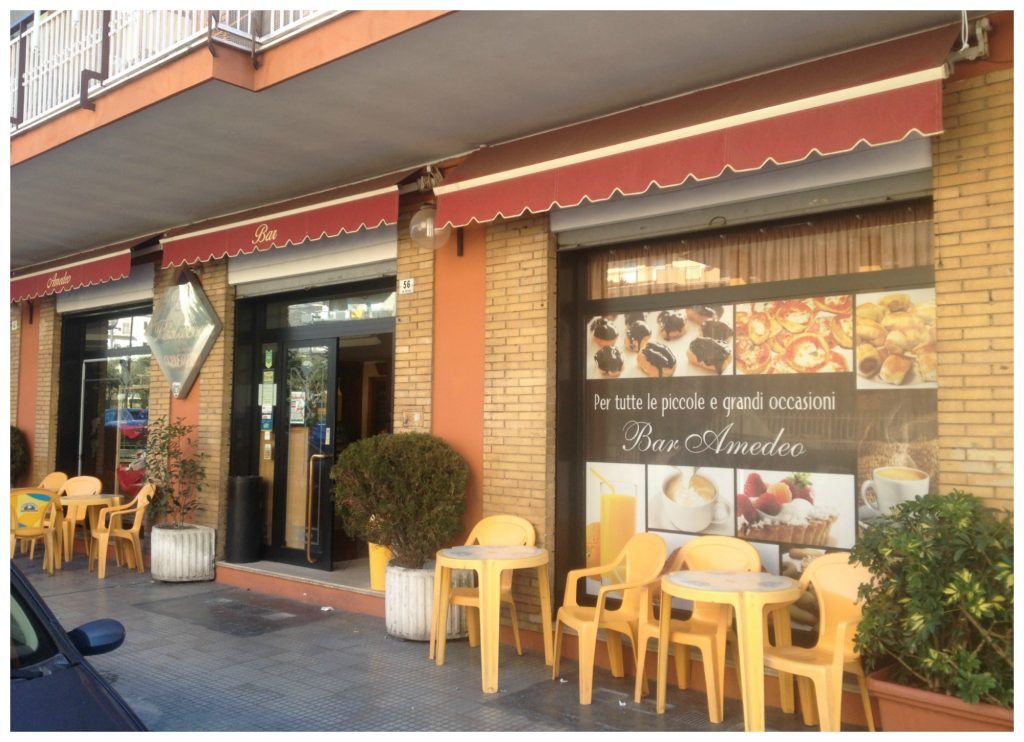 They did have a huge range of pastries and we sampled many. 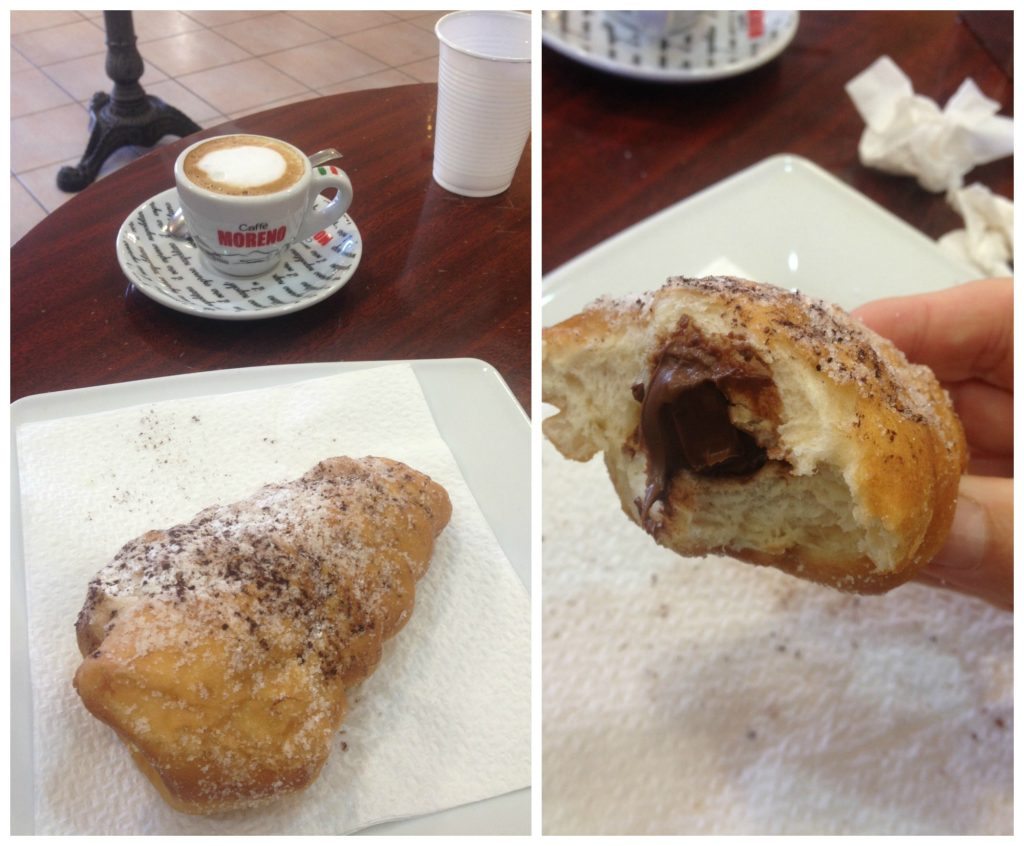 However, the cafe / restaurant closest to us has the best Italian pastry ever… 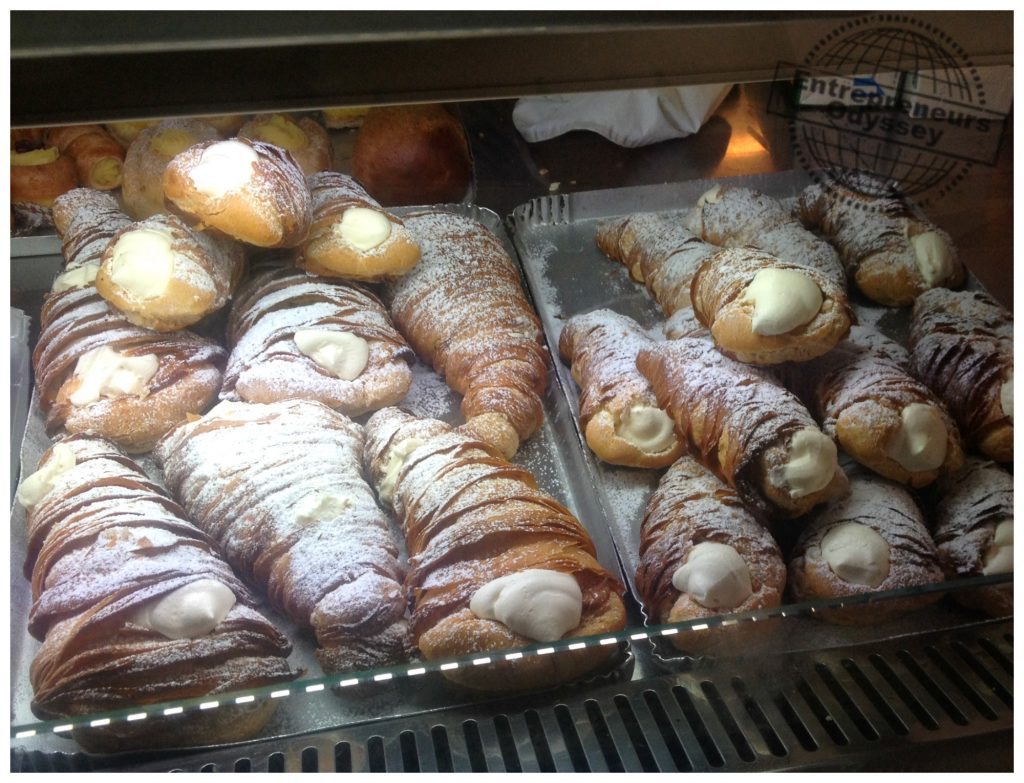 These beauties are delicious, crispy flakey pastry filled with a whipped vanilla cream with a hint of lemon and dusted with icing sugar.

It was unfortunate for us that the Bar Pasticceria Troiano Snc closed for renovations after just a few visits.

Coffee & aragoste at the local cafe

Here are some of the sights from close to our apartment. 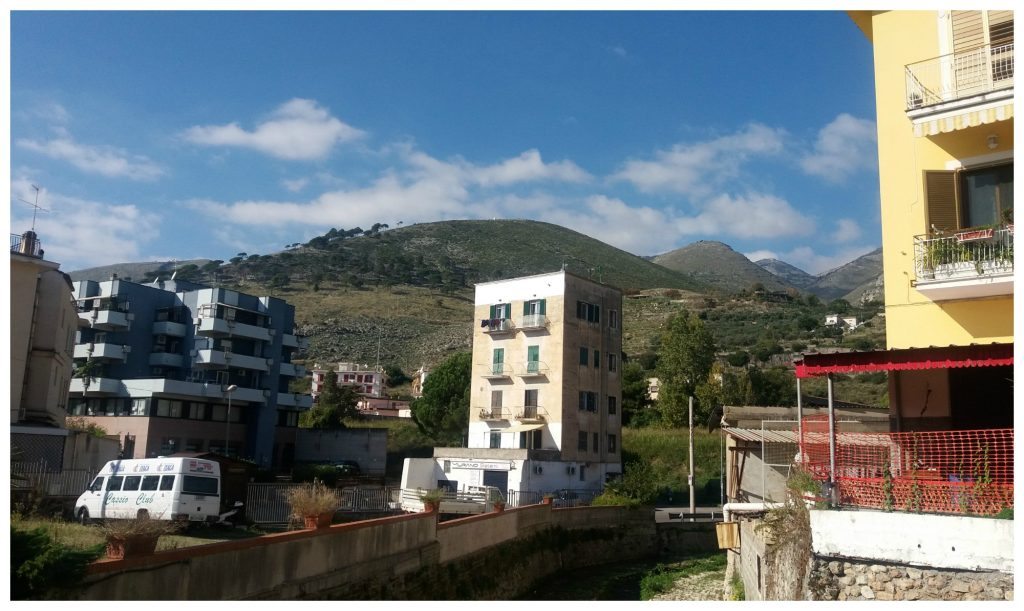 Behind our apartment are mountains and hills, the town of Formia lies between them and the sea. 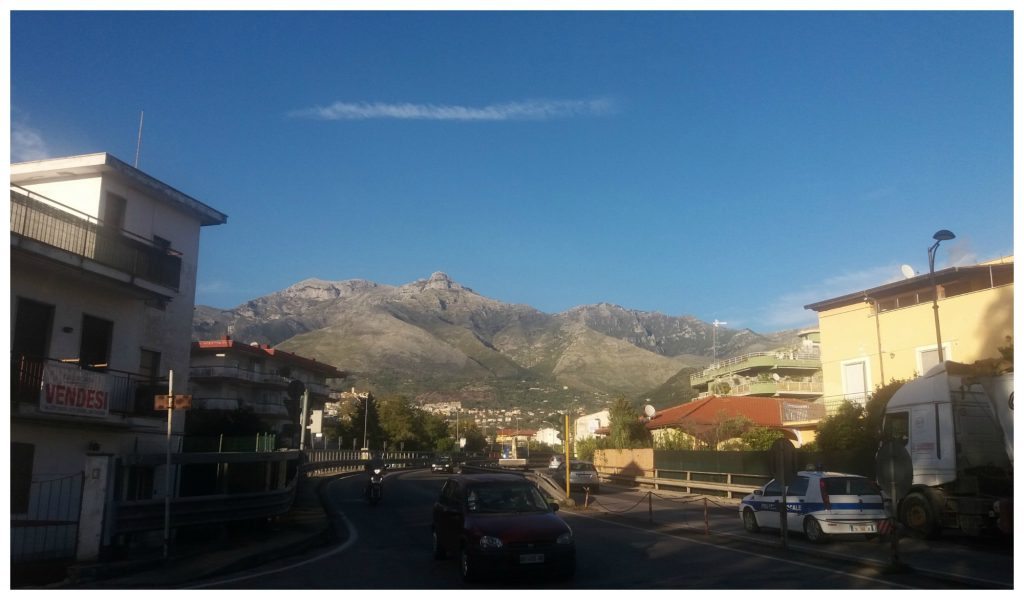 In early January the same mountain had a covering of snow and it was bitterly cold when the wind whipped through the town. 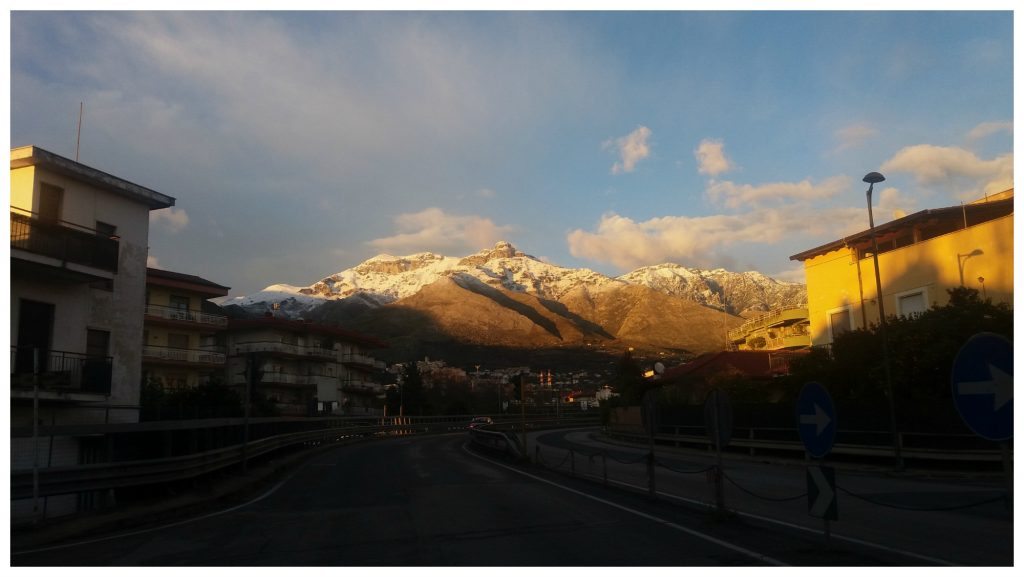 Snow tops the mountains in Formia

This is the view from the apartment balcony with a double rainbow after some rains. That building opposite does finish abruptly like that.

Panorama view from our apartment in Formia

We asked a few locals around on how to get to Gaeta from Formia using public transport and they were not so sure, probably because they would just drive there. We did manage to find out where to catch the bus from and how it works with the tickets.

Catching the local bus to Gaeta

The first time we got on, we asked for tickets and the driver just waved us in. The second time, we had figured that you actually need to buy bus tickets before getting on the bus. You have to buy them from the kiosks around town.

Lucky for us, there was a kiosk just nearby to the bus stop.

Bus stop in Formia to Gaeta

This is where you catch the bus to Gaeta. It’s in front of a few cafes on the square just up the road from the big Conad shop. Just keep an eye out for the shop sign you see above. Tickets were €1.10 each per journey.

Gaeta is a lovely little town and certainly worth a day trip if in the area.

Getting to know the locals

We enjoyed meeting some of the locals in our area especially as we were here for nearly three months. The supermarket staff got to know us quite well as did the staff at various cafes.

meats and cheese from the local supermarket in Formia

Shopping was always a treat as we sampled many products thanks to the helpful guys at the SISA supermarket.

We didn’t get to know the local hairdresser that well… All smiles before. 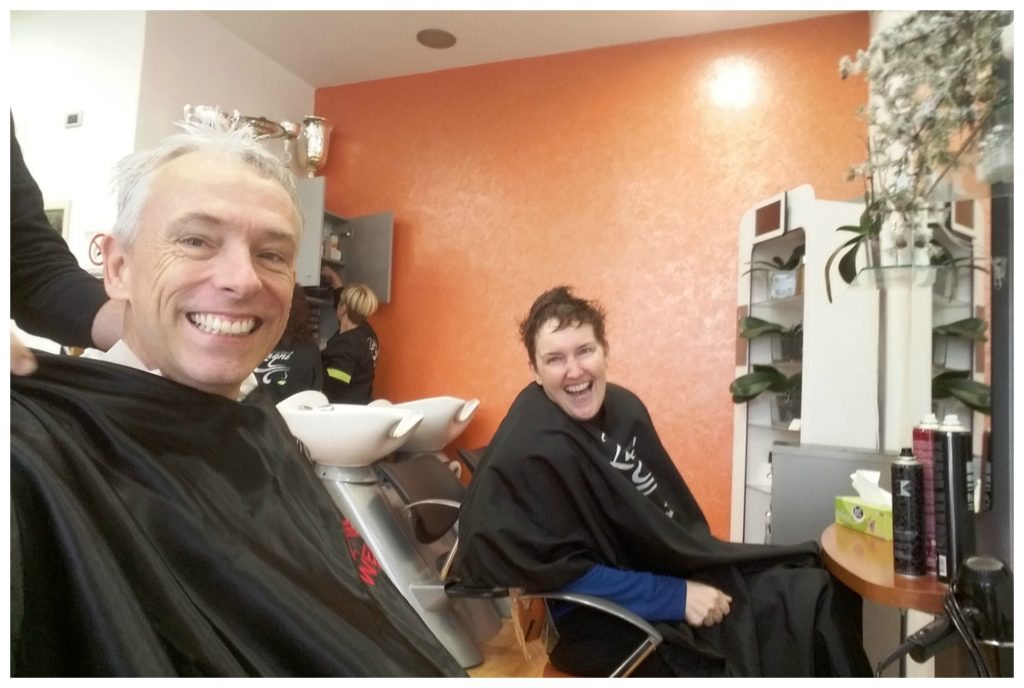 As the resulting cuts were a bit short especially as it was winter and cold, I almost had no hair. After a few snip snips it was zzzzzzzz with the razor and before I knew it, it was off. Talk about “short back n sides” 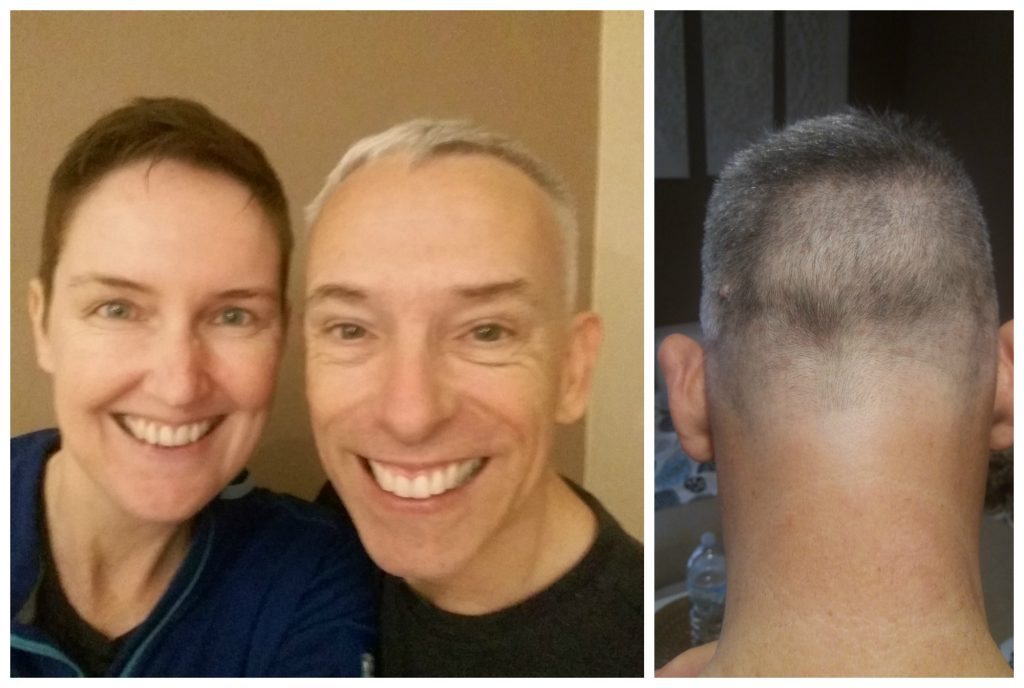 We had a sip of Grappa afterwards a chuckle at our new styles.

Small town prices or not?

One thing to note is that some items are great value for money and others are a total rip off. 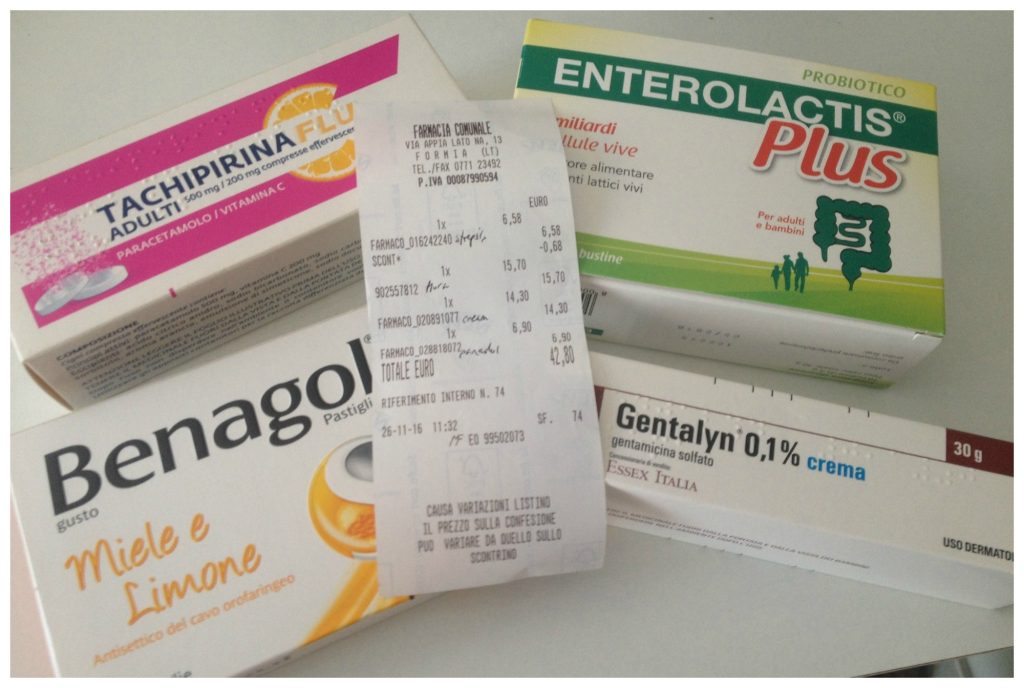 Expensive over the counter medicine in Formia

The above medicine that we needed when Moni was not feeling too crash hot cost €42.80 which we found expensive. 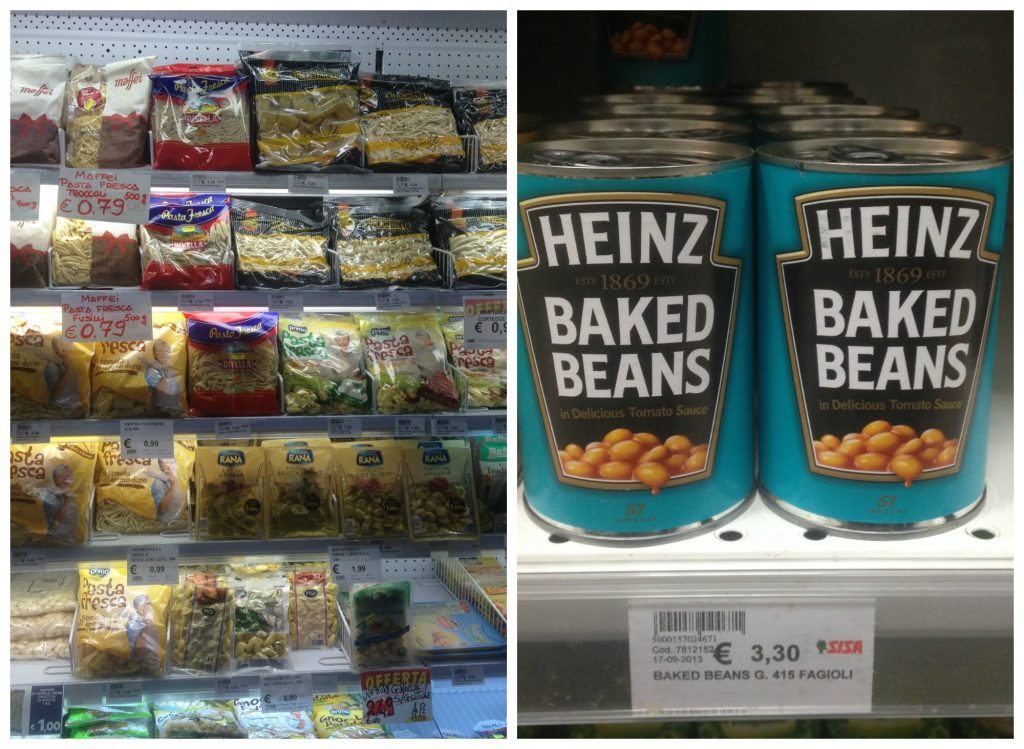 The fresh packed pasta was great value but take a look at the price of a tin of baked beans.

All up, we had a nice time in Formia even though we didn’t get to do as much as planned. It wouldn’t be a must return place on the map for this long a stay, but ideal for a week or two.

I’ll finish with another cafe that is on the main road through the town. Caffetteria Hormiae has decent coffee and pastries with a small outside terrace, a nice place to sit and people watch on a warm day.

4 Responses to “The Quiet Town of Formia on Province of Latina, Italy”