The Escalators in Medellin are a wonderful example of how this city has started to turn the tide on its horrid past. The Escaleras Electricas in Comuna 13 as they are called in Spanish were built at the end of 2011 beginning of 2012 and have since then cut what used to be a grueling half an hour hike up the side of the mountain which was roughly 28 stories to an easy 6 minute relaxing ride.

The metro will get you to the end station of San Javier then a short taxi ride up the hill is as far as they can go. From San Javier you can also catch the Metro cable (cable car) to Santa Lucia. 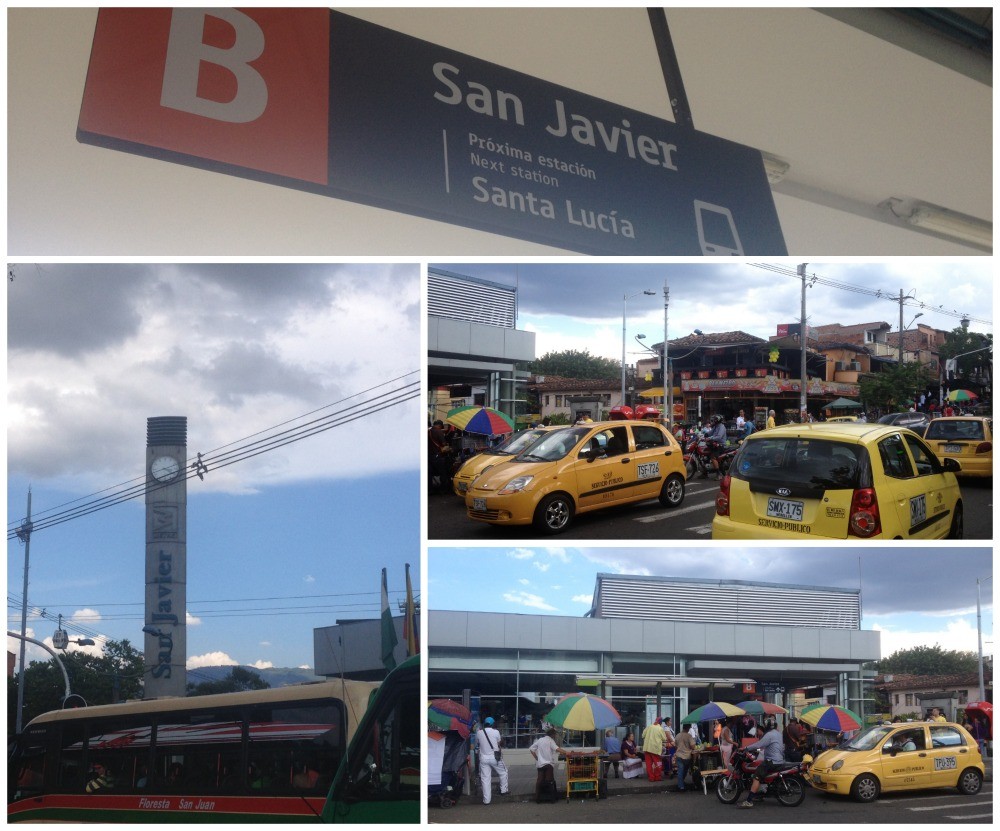 The taxi ride is only a short distance and around 5000 peso $2.83 AUD but better than walking up. 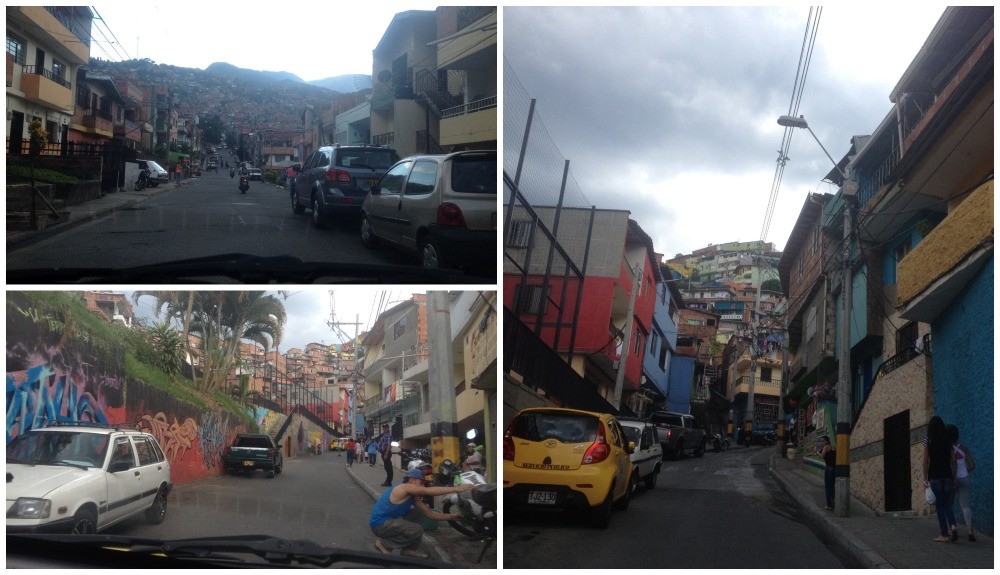 The road ends with a tight roundabout on the hill which is not so much fun for the drivers having to wait for passengers to exit taxis or for the delivery trucks. 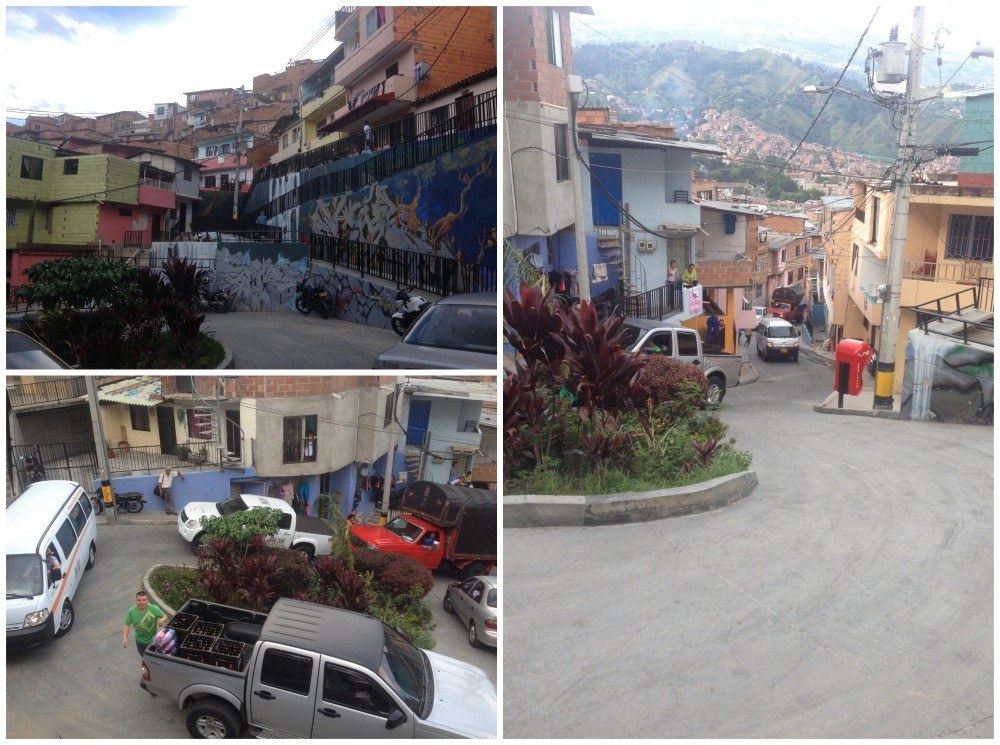 From there you need to follow the path around which gets you to the base of the first of six escalators that will bring you to the top. Actually it’s not the top of Comuna 13 (but almost), and the views over the city are awesome.

Great images from the escalators in Medellin

At the base we are met by a guide or ambassador for the Escaleras Electricas comuna 13 who rides with us the entire trip up and back down on the way explaining things in spanish about the build and changes that the escalators have had on the area and its people. I also think they are there to help the locals understand how they work, we must remember that those living here in what was the most dangerous and poorest part of Medellin would have never seen or even been on an escalator before.

The first of the Escalators

The locals have for many years struggled with a way of life that many of us living in the luxury of modern cities could hardly comprehend and would probably not last a week.

Many of the people from Comuna 13 and other comunas have built shanty towns on the sides of steep mountains away from the city with no roads or transport in or out, everything would be achieved by walking. Not out of a want to live like that but as a result of the city being controlled by the drug lord Pablo Escobar and his bandits that would force people to live in fear.

Our guide explained the reasons why the city has taken huge action in building a great network of transport like the Escalators here in Comuna 13, thanks to MiLe our Spanish teacher who organised todays visit translating for us, reconnecting the city’s poorest and most dangerous neighbourhoods called the Comunas with its regenerated centre, officials hoped not only to make residents safer but to give them a greater sense of pride and belonging.

A young child goes up and the soldiers come down

Today we travel these escalators not in fear but in awe of the progress and change that Medellin has and continues to build. However the presence of military with weapons is a stark reminder of possibly how delicate the situation could be.

Never did we feel that we were in danger or out-of-place being here, on the contrary we were welcomed by locals with huge smiles and young children playing in and around the small streets.

How it looked before the escalators were built

Has been transformed into a sea of colour with walls of art on nearly all the free space available, but not graffiti or foul language this is real art, street artists from all over have come and created amazing visual displays.

Wall art at the Escaleras Electricas in Medellin

The escalators make their way up between houses and in a zig zag way with streets at different levels and homes built-in every available space. The inhabitants of these homes may now have an easier way to get to and from the main town but now have another element to deal with, that of the tourist and local traffic that visit for the purpose of looking around more than a need.

The invasion of tourists some with massive DSLR cameras and zoom lenses that wouldn’t be out-of-place behind a goal in a world cup football game are snapping away at homes and the scenery which is a home to someone. I think we must learn to respect others and their privacy but will we?

The escalators are covered with an orange roof with glass panels which protect from the elements and blend in well with the colours around.

A great achievement for the community and one that draws the tourist to the comuna which would normally not have been possible.

Similar achievements have been made in other areas of Medellin with the introduction of the immaculate Metro service and metro cable (cable car) which travels high above comunas like the one here in San Javier that goes up and down as it crosses the river to Santa Lucia and the other metro cable that takes people up to Santa Domingo and then on to the Parque Arvi.

Having fun on the way up

The journey up to the top which is the equivalent of a 28 story building takes six minutes without stopping. We took way longer as we stopped to take in the views and art enjoying the moment.

At each level the view grows and the volume of this places starts to become clear.

Colour is everywhere and makes the place look lively

Eventually we make the last turn to escalator number 6 or 1 depending if you’re going up or down and then reach the top. The entire moving staircase length is 385 metres and cost $7 million AUD or £4 million pound yet is FREE to use and is one of the reasons why the city of Medellin was voted city of the year in 2013.

The colourful surrounds looking at the viewing platform from different angles

At the top of the last escalator there is a viewing platform, and you can also walk around more of the area there as well. 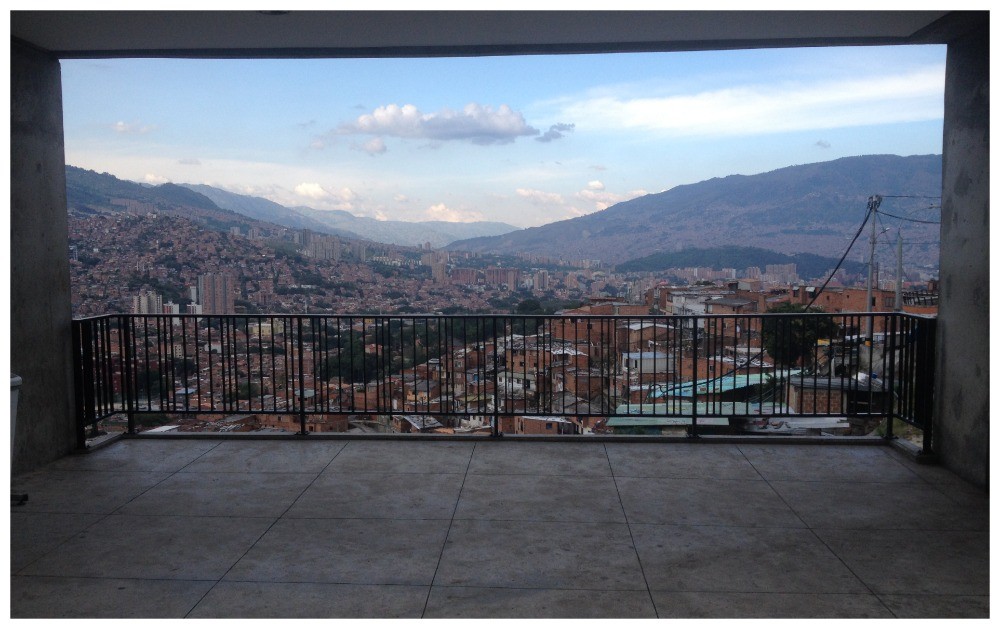 A viewing platform at the top

The views are great that’s for sure and I find it hard to imagine a city of years gone by. The locals are moving on or so that is the impression we get with all the positive images and the forward thinking of the government to enhance the city and way of life for all Colombians and this article may add a slightly different perspective.

The views from above the escalators in Medellin

A small road wraps itself around the side of the mountain which is really only for bikes and walking.

A bike road or path overhangs on the route

While we are enjoying the vista a group of youngsters of various ages makes their way up the stairs playing musical instruments, further down we saw a group learning how to break dance with a tutor. 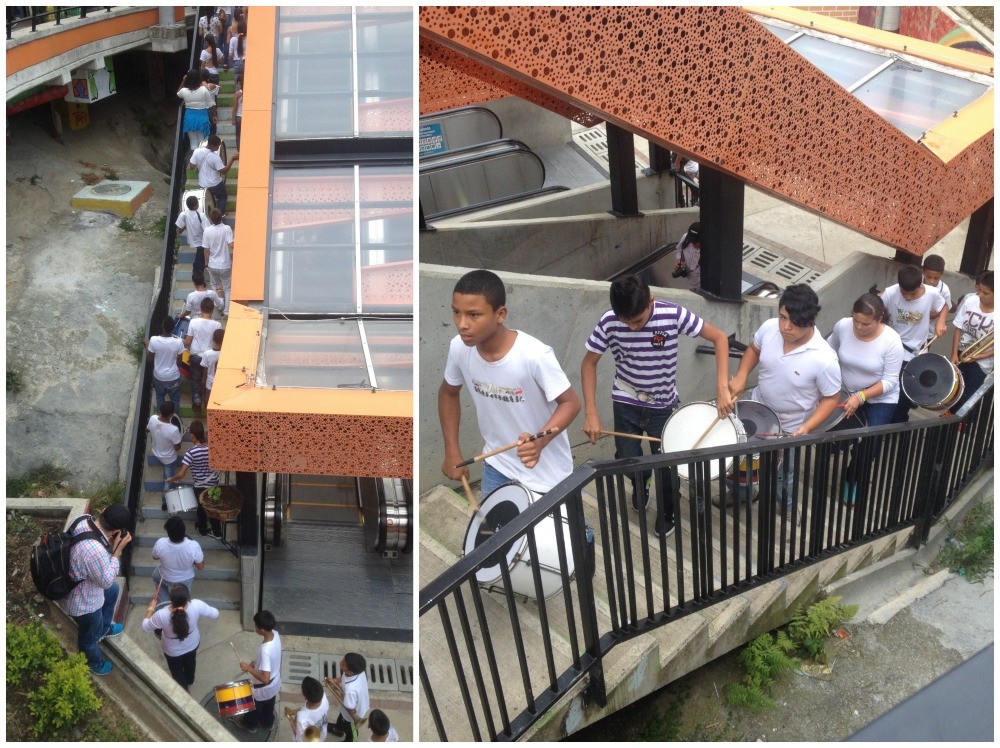 After spending some time at the top we made our way back down viewing the different art from the opposite direction.

more murals on the walls

Look at the detail of this peacock art.

fabulous wall art at the escalators in Medellin

I can imagine it has certainly made life a lot easier for those living and working here, even though getting stuff up to your house might still prove a challenge. Anyone for a washing machine? 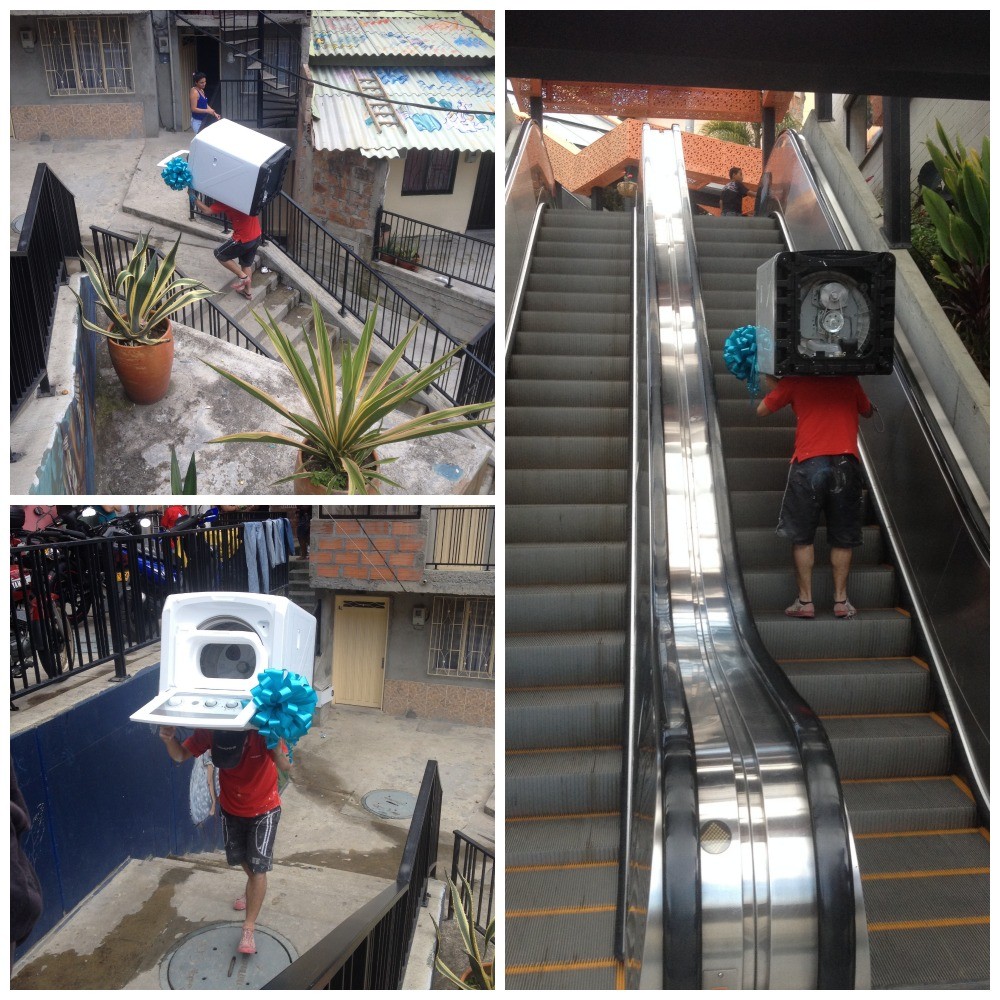 We thanked our guide and gave him a good tip for the hour or two that he spent with us and then walked down from the base escalator to where the taxis are past more murals and a few shops. 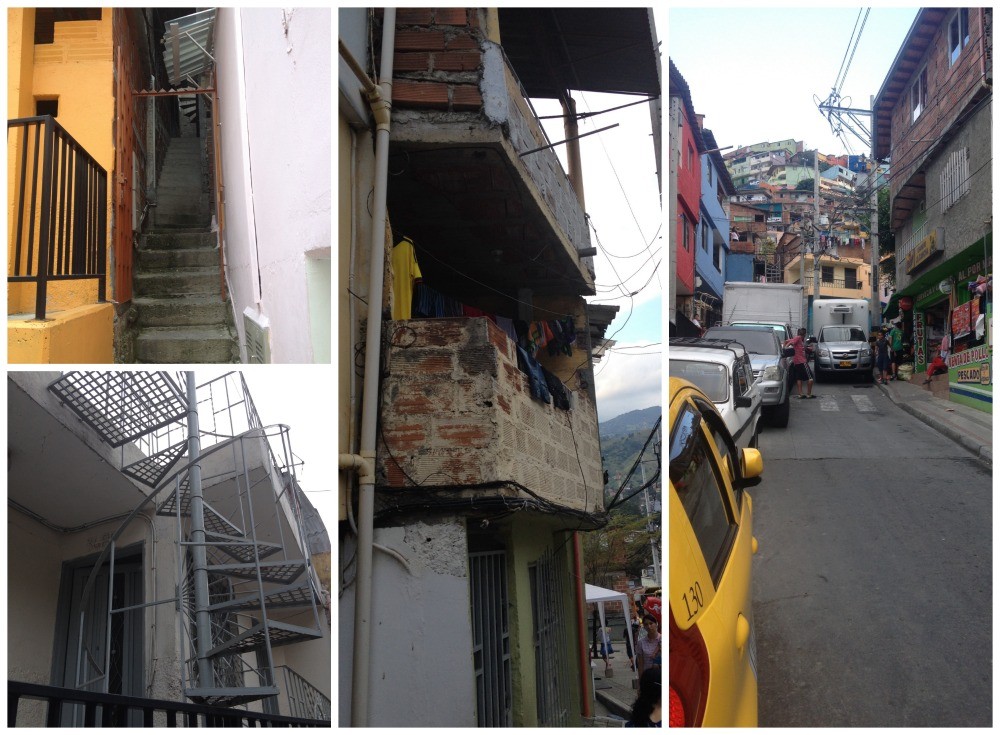 The road down to San Javier

Past some really good art and children outside playing something that is almost a thing of the past in many countries.

Amazing street art below while children play together outside

From here we hailed a taxi back to San Javier metro station and then took the metro cable to Santa Lucia and back.

5 Responses to “The Escalators in Medellin Free For The People”