Early morning mountain view from Auberge Orisson on the Camino 2015

Day 2 of Our Camino

After a good nights sleep at the Auberge Orisson we woke up to clear skies and low clouds, and no rain. Thankfully we were feeling pretty good after completing our first 9 km walk on the Camino. Today we will be walking from Orisson to Roncesvalles on the Camino. 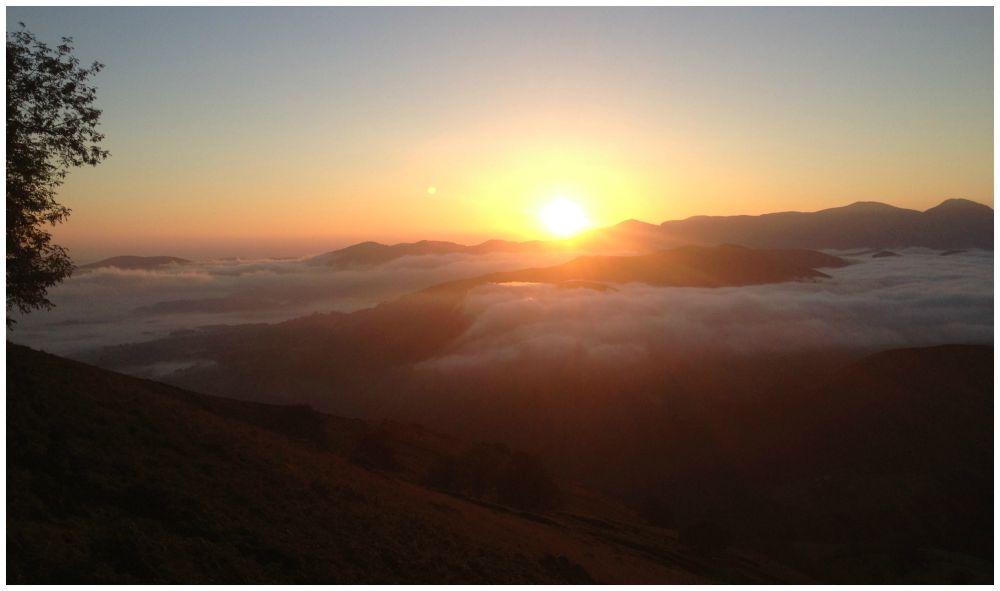 A breakfast of tea, orange juice and toast with jam was included in our accommodation fee and served between 7 & 7.30 am.

After breakfast we left Orisson at 7.45 am and began the 17.3 km hike to Roncesvalles that we planned for today.

The views here are wonderful, even that should be enough to make you want to stay for the night.

Sunrise on the Pyrenees the Camino 2015

Just as we were ready to leave, a group of cows decided to pass our way, all on their own. 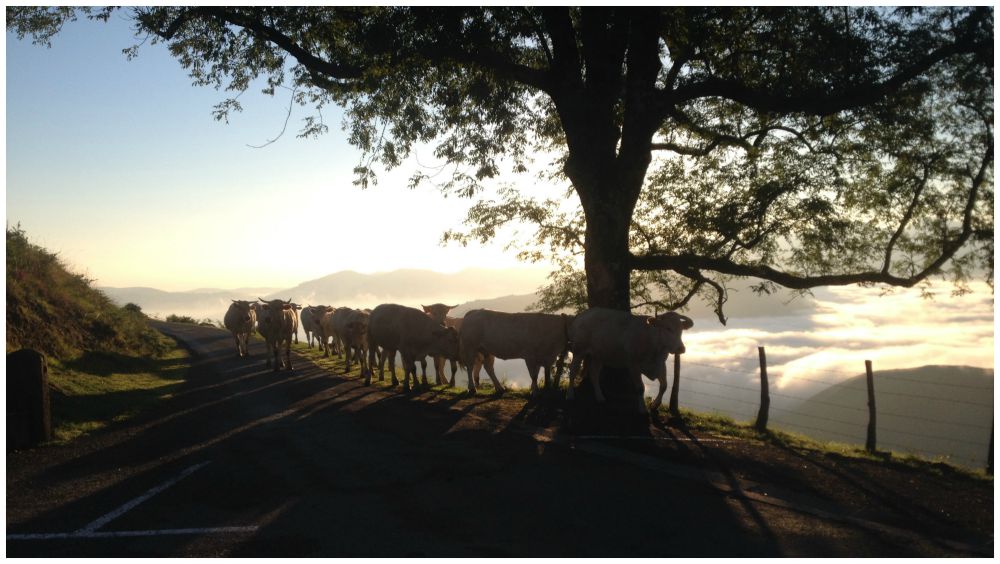 Next up in the animal world was a group of goats happily eating from the grass as we walked on by.

walking in the Pyrenees mountains on the Camino way 2015

The scenery today was just fantastic as we made our way higher up the Pyrenees. 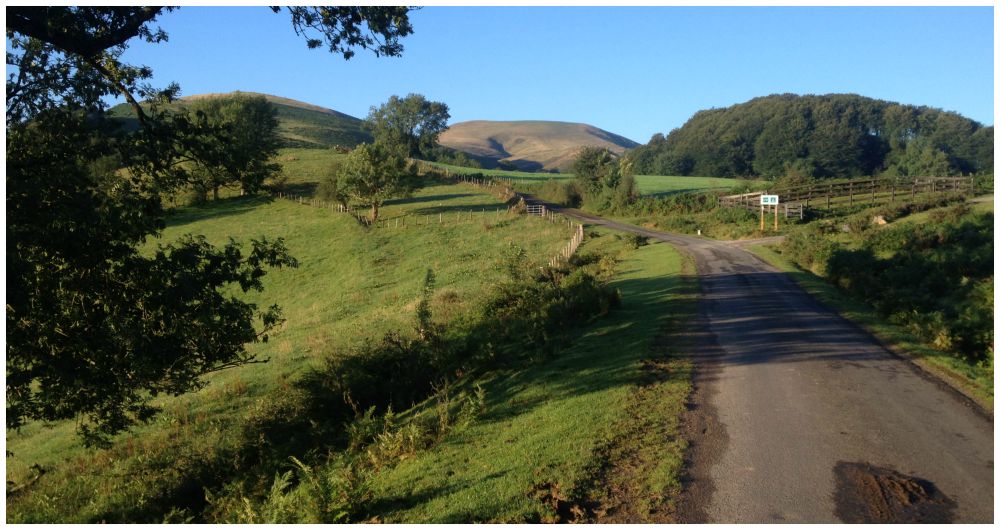 Views back towards Orisson.

Low clouds over the Pyrenees 2015

Crossing the Pyrenees on the Camino 2015

The Camino way to Roncesvalles 2015

It was time for a break at a spot with a good lookout. I love the sun rays in this photo. 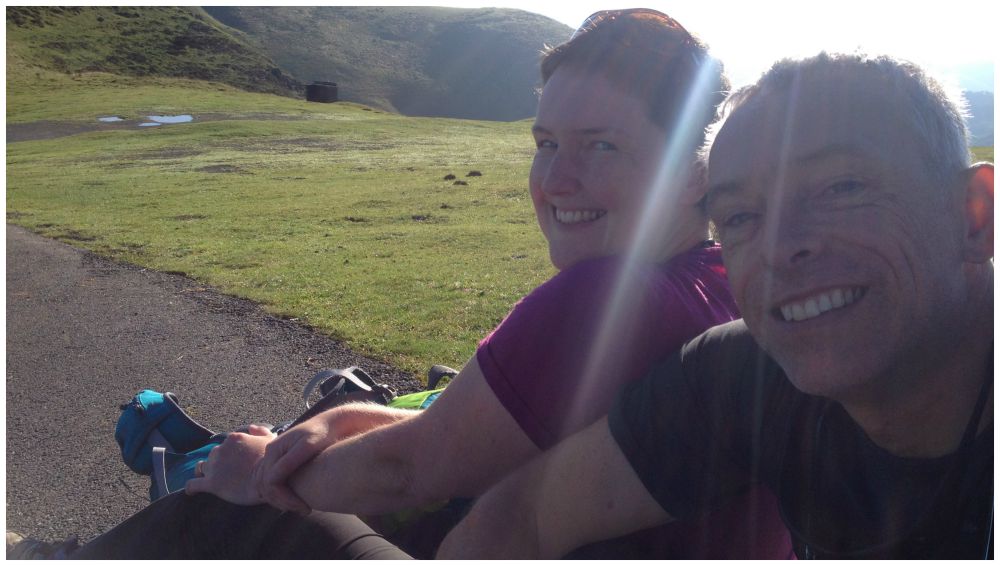 Continuing onwards and upwards, the wind picked up and was rather cold as we traversed the mountains at 1200 metres. Up here, a lone man and his van full of goodies that the pilgrim would want was set up selling things from hot tea or coffee to chocolates, bananas etc. 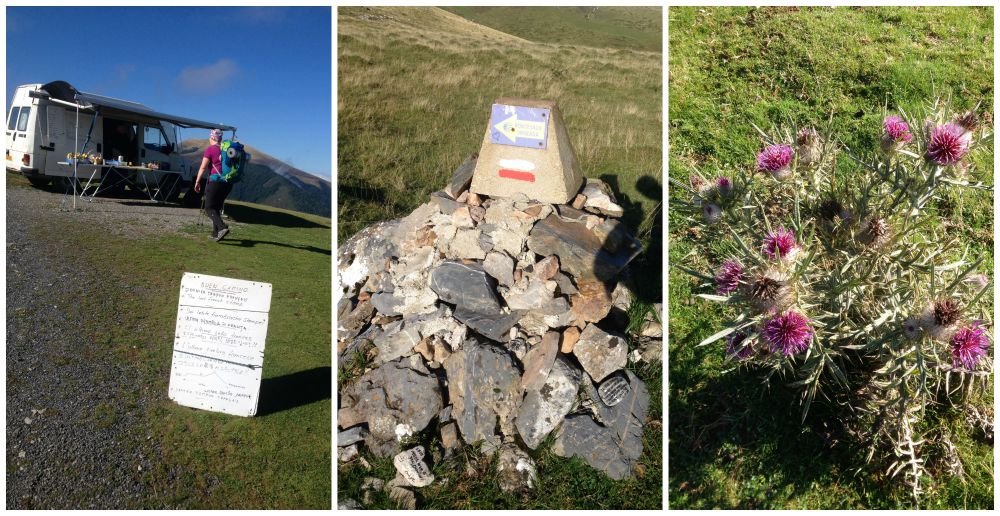 A lonesome man and his white van selling hot drinks and items to pilgrims on the mountain, a marker and thistle 2015

On this part of the Camino we passed many of these markers and mountain thistles and then some horses.

Horses on the Pyrenees mountains 2015

The route took us over some very black wet surface for a while which eventually cleared. 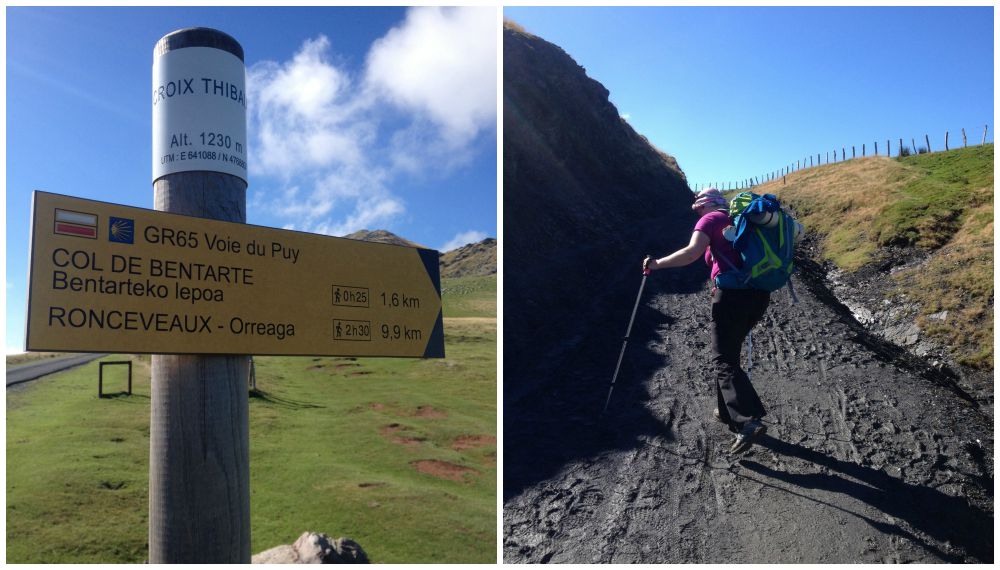 The walk to Roncesvalles on the Camino 2015

Next we came across a sign informing us we have only 765 kms to go… Cool, just keep on walking. Also here you could fill up your water containers from the Fountain de Roland. 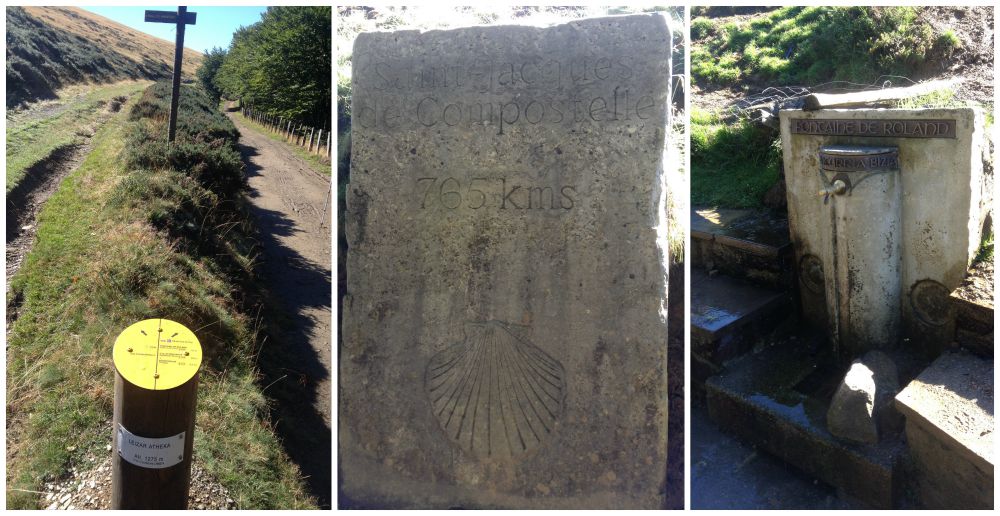 The next part of the way took us through a forest where the ground was covered with leaves and in places very soft and wet. We rested up here and had a banana which we had bought from the man on the mountain.

Through a wet leafy forest on the Camino 2015

Back out in the open the route is nearing the peak and on the route is a shelter which can be used especially in bad weather when the chance in high that one can become lost. (I read this on the sign inside the Izandorre shelter).

finally we reached the summit at 1450 metres. 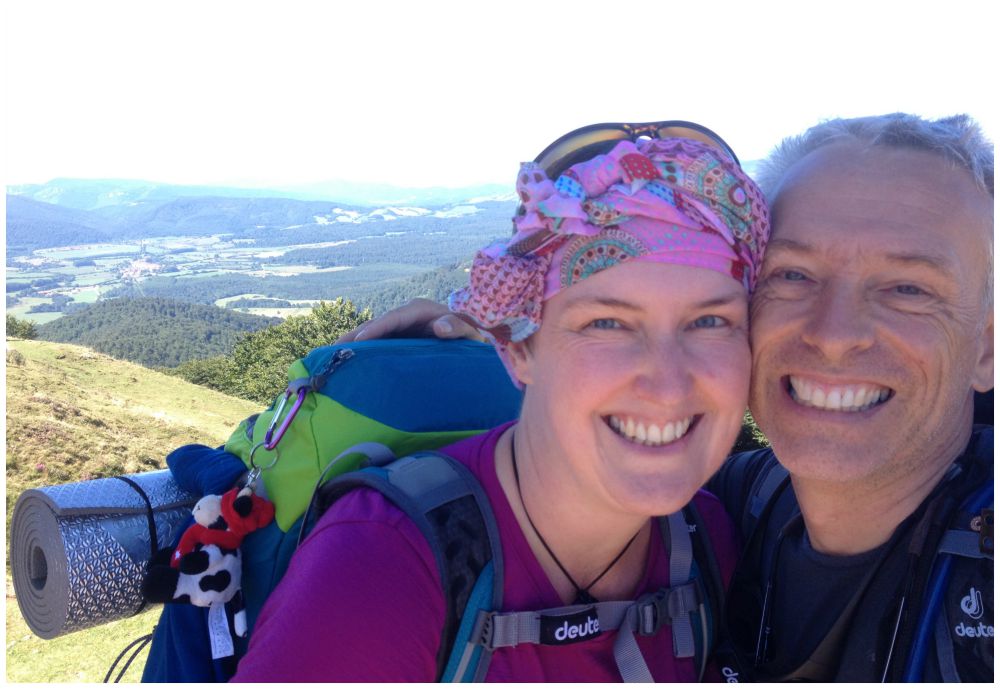 The view around the top of Col de Lepoeder peak.

At 1450 metres above sea level the peak

From here we can clearly see the town of Roncesvalles in the distance way below us. 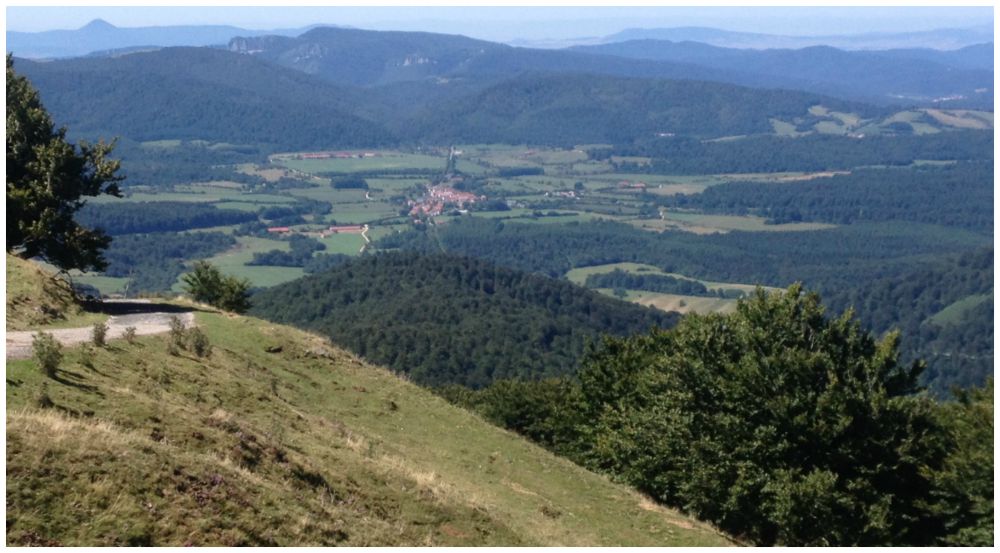 Roncesvalles in the distance on the Camino 2015

What ever goes up must come down, and so the decent began, boy was this tough. 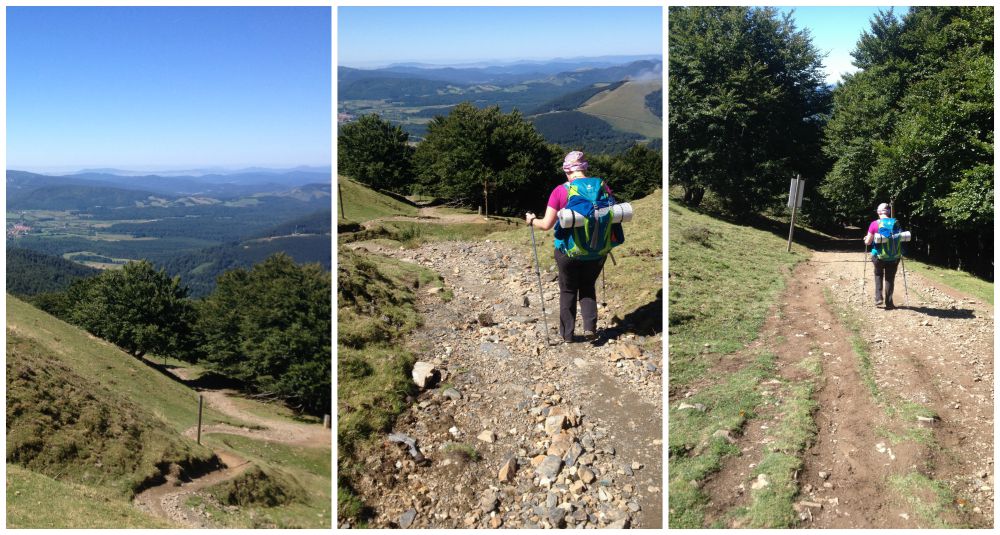 The tough walk down to Roncesvalles on the Camino 2015

It was very steep in parts and the uneven surface made it difficult to walk. After nearly an hour we assume that we crossed the France-Spain border (there was no sign here) and continued on into more light forest before reaching a clearing and then Roncesvalles. 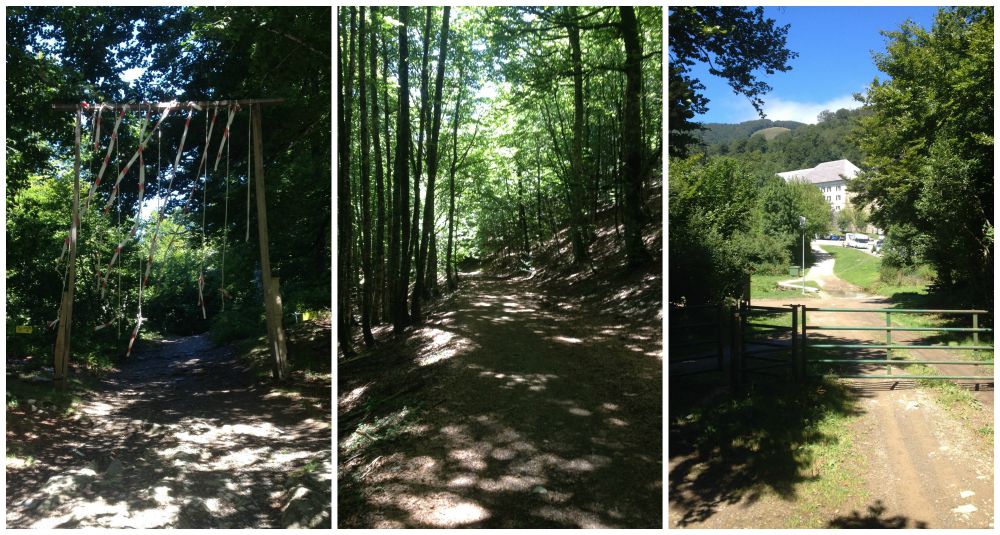 To wrap up this post from Orisson to Roncesvalles, not only was the climb up hard, but the way down (the quick way, there was an alternative route which kept to the road) was very steep and every step made your legs feel like jelly and this was for over an hour.

Both Moni & I actually found the last hour down was really hard on the legs and at this stage were so glad we didn’t try to complete the entire stage from St Jean Pied de Port to Roncesvalles in the one go, these two days alone were enough, especially at the start of such a long walk.

3 Responses to “Our Camino – Day 2 Orisson to Roncesvalles”