From Juneau to Skagway we covered 101 nautical miles at an average speed of 14 knots to arrive alongside in Skagway at 5.53am.

We had heard from some people on the cruise saying Skagway was small and nothing special. Actually it was really very picturesque. 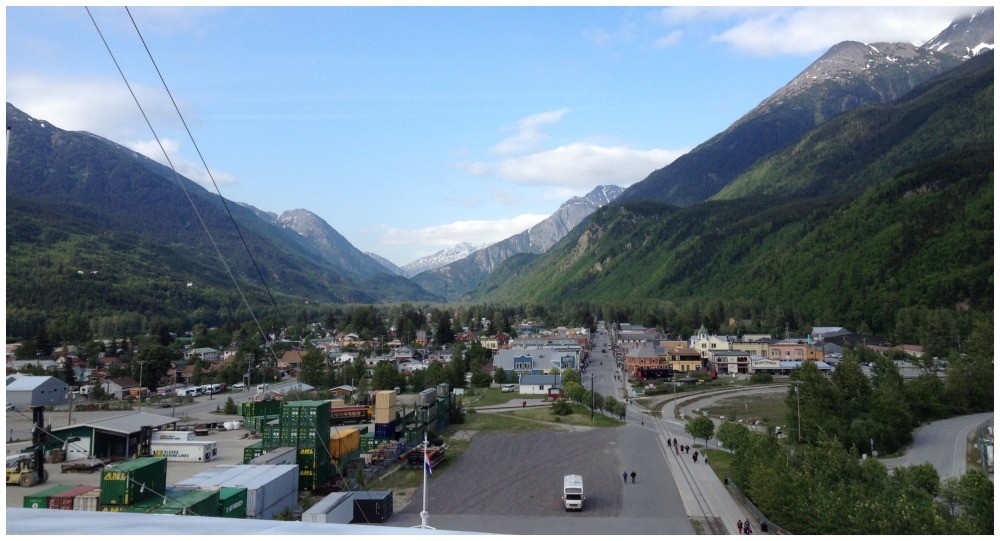 Skagway from the front of the ship

After a filling breakfast in the main dining room we get wrap up warm before we got off. 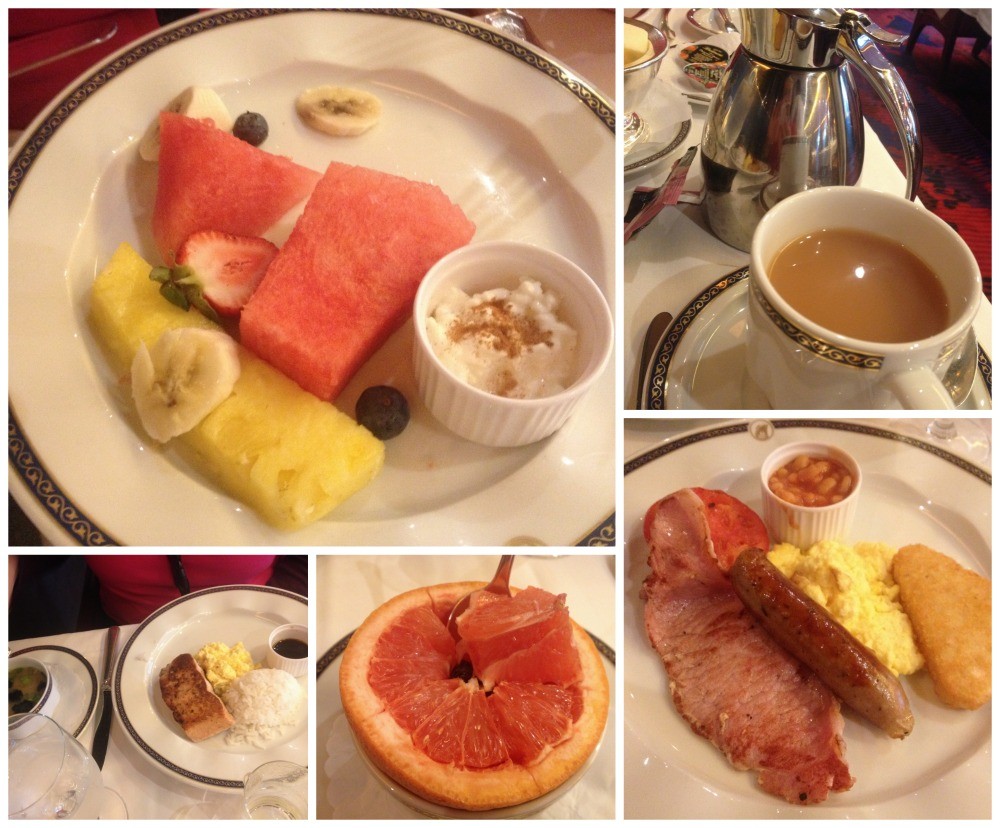 Once again looking for tours to do independently we checked out the stall near the train and enquire about the train journey, funny enough it’s run by the ship’s crew and we end up buying tickets for the “White Pass Summit” which is due to leave later on at 12.45.

Wooden sidewalks line the tidy streets just like back in the old days, it’s almost as if time had stood still with many interesting buildings in Skagway, Alaska.

We walked around the small town for a couple of hours up the Main Street called Broadway crossing 1st, 2nd, third avenue right down to 12th which is now into the housing area, no longer shops and then back to the ship via the other side of town.

We actually liked Skagway more than our port of call in Ketchikan and our first visit to Juneau, it has more character and is not so glitzy. 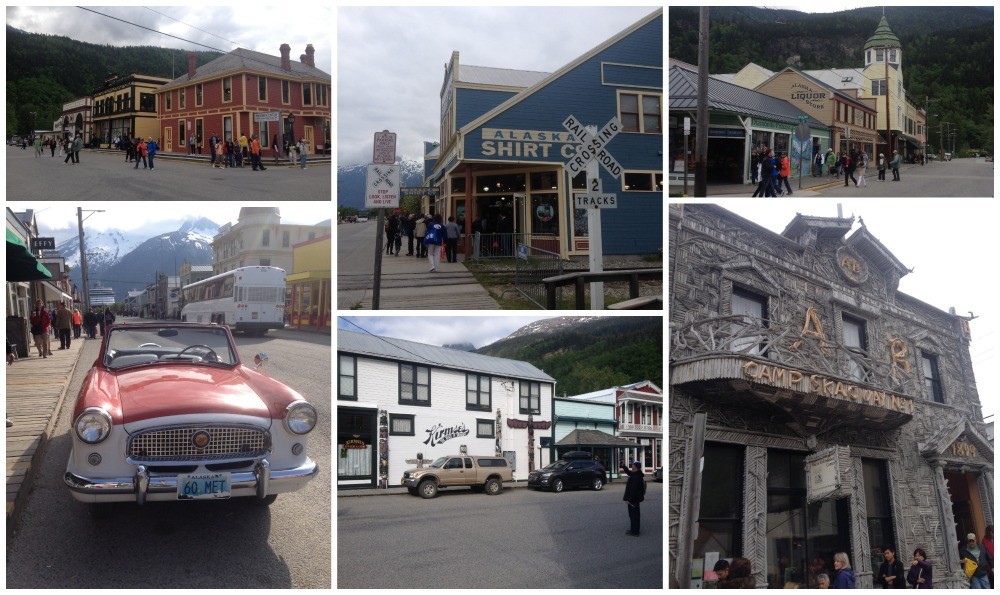 Skagway in Alaska with some interesting shops

Back on board we grab a quick-lunch before heading out to catch the train.

The train is right down in front of the ship only a short walk, we get on and find a couple of seats.

It is nearly 45 minutes before we actually start moving as there are three more trains on the tracks and we have to allow them to come down from the pass. 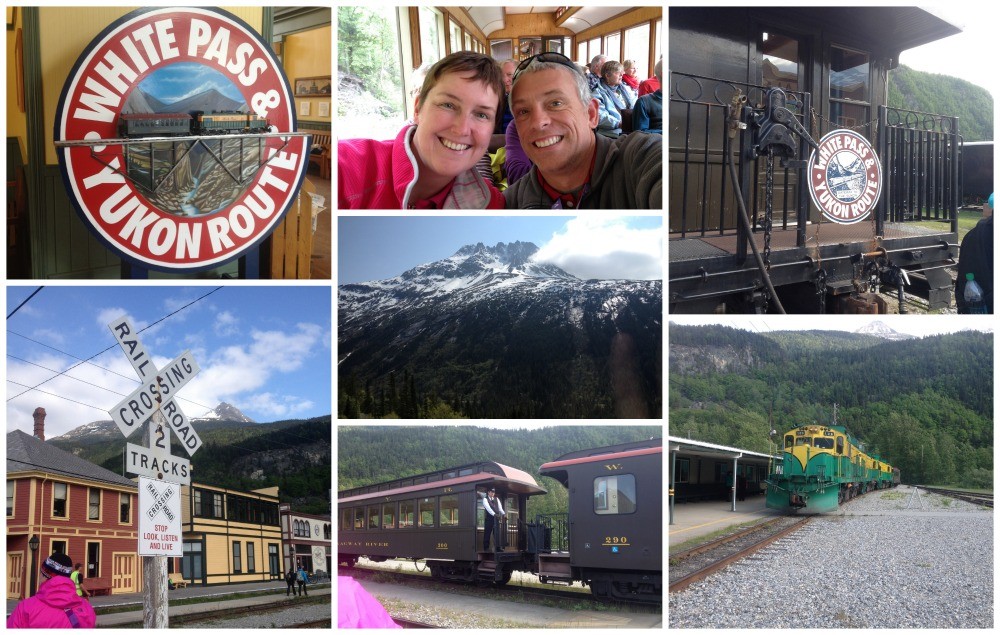 The three-hour journey is wonderful and well worth a visit up the mountain to the summit at 2865 feet 873 metres.

The White Pass in Skagway

The trains do go further on to Carcross, Yukon Territory and there you can take the bus to Whitehorse, YT but our trip was up and back. The engines are unhooked and reconnected at the other end to take us back down the pass.

There is commentary on the way and plenty of opportunities to take photos out on the carriage ledge.

You pass through tunnels and cross bridges as you meander up and back down the track. You can go up by bus and return by train if you want, but that’s another tour.

The railroad was built in 1898 as a result of the Canadian Klondike gold rush that started in 1896 unfortunately the railroad was only ready after the gold rush had eased however the White Pass & Yukon Route was designated an International Historic Civil Engineering Landmark in 1994, an honour that it shares with the Eiffel Tower, Statue of Liberty and the Panama Canal.

The gold rush was the biggest in history, in only five months, between July & November of 1898, the United States Mints in Seattle and San Francisco received ten million dollars worth of Klondike gold. By 1900 another thirty-eight million dollars had been recorded becoming the largest gold rush ever known.

The train carriages are old, on average 43 years, some of the oldest date back to 1883 and are still used today while the Diesel engines are from the 50’s and 60’s.

There is also a rotary snowplow which was used to clear the lines which was last used in 2011. 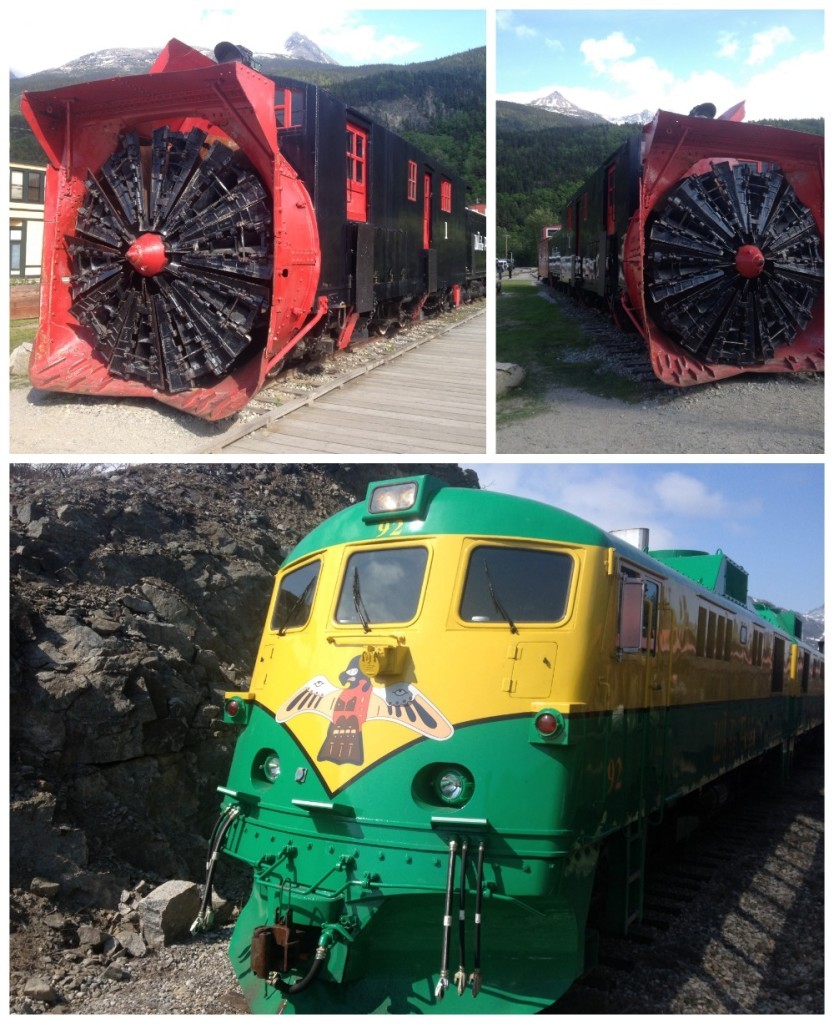 The Yukon train and the rotary snowplow

At the bottom we check out a few more places that we missed earlier this morning like the Wells Fargo bank, before boarding the ship again. 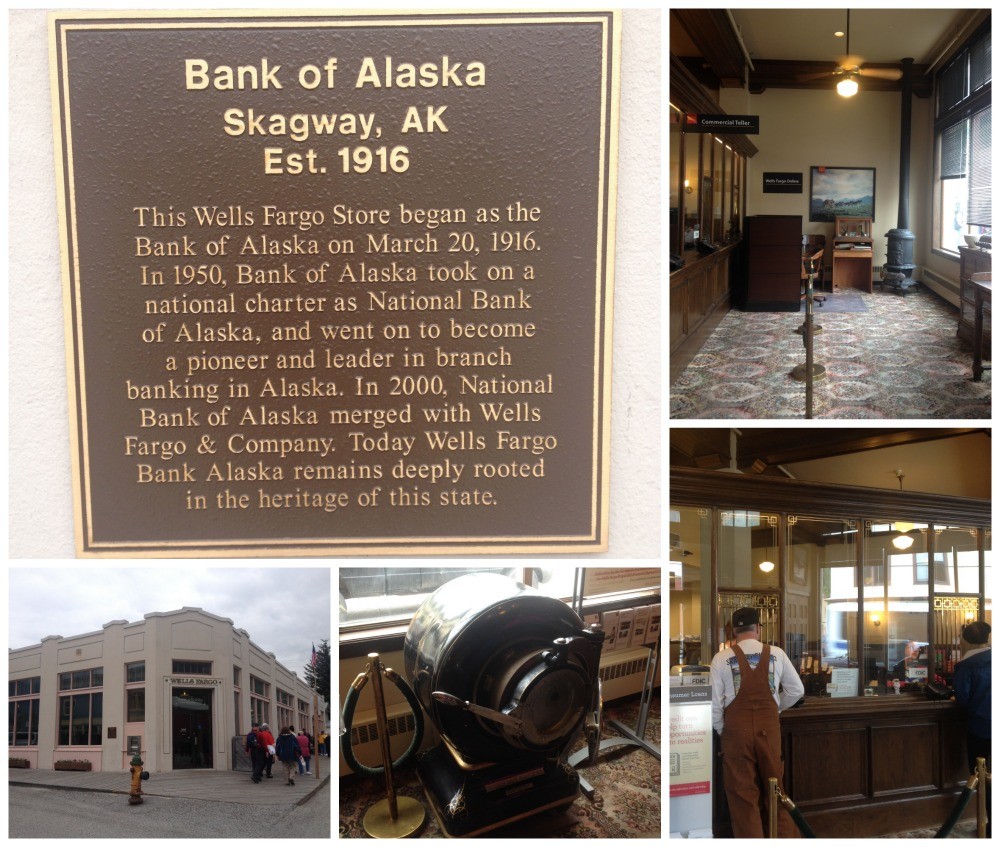 In our cabin we are greeted by another towel animal, can you guess what it is? 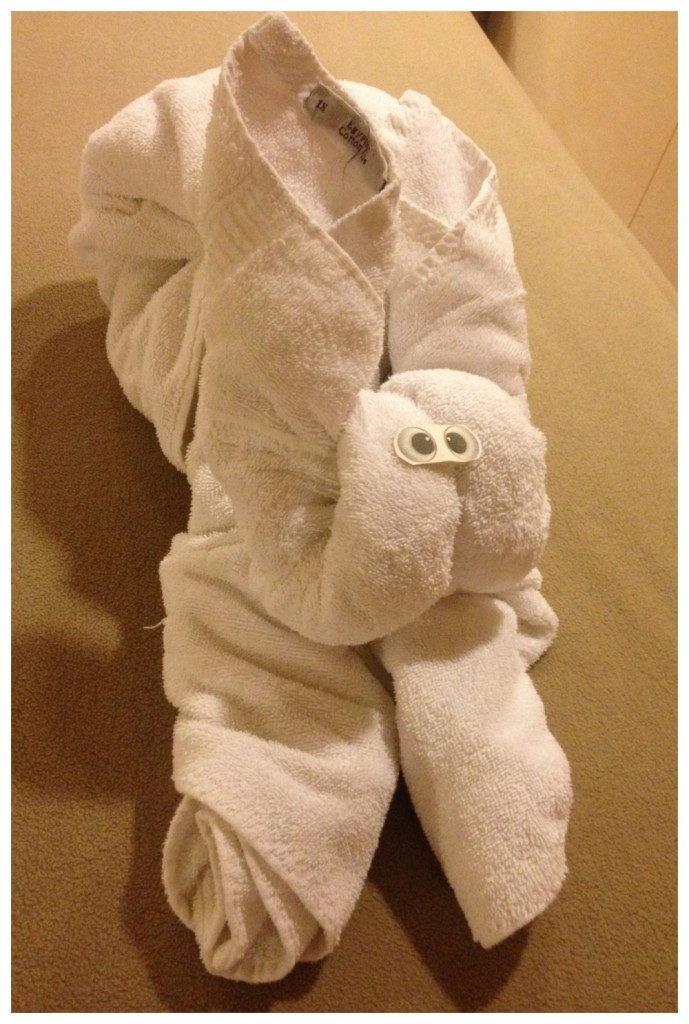 Dinner at our dining room table with James, Kathy and Pam and …. is enjoyable with little interesting conversation but the food and service is great. We find out that Kathy has a Karaoke bar in Houston with many private rooms for hire ranging from 5 to 35 people where we are invited to go. 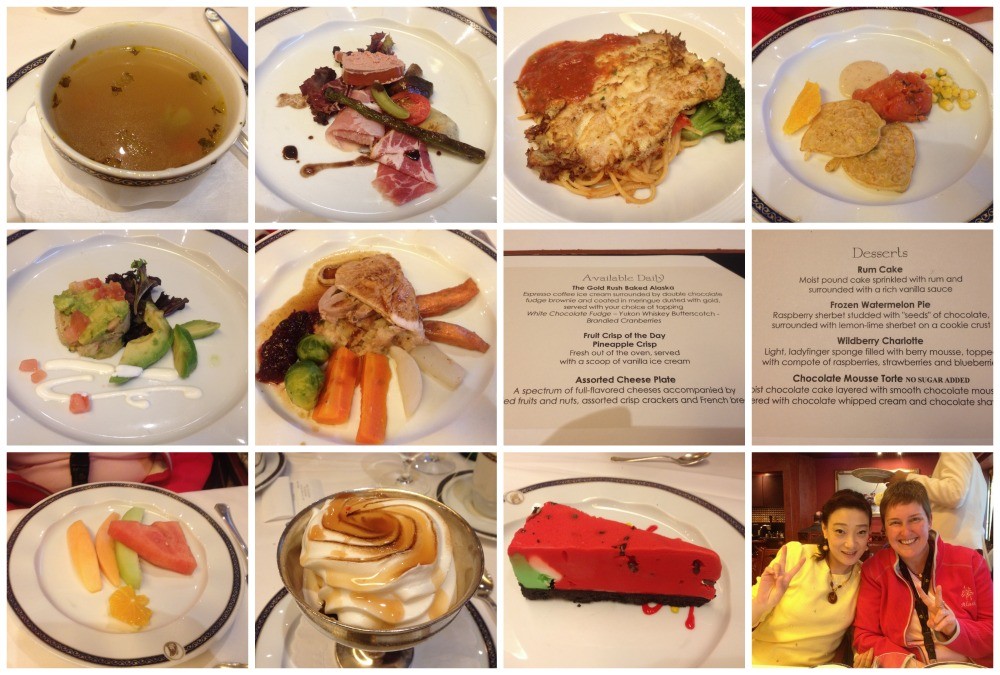 Dinner in the main dining room on MS Oosterdam

The ship lets the ropes go at 8.38pm and we head towards Glacier Bay.

Let us know your thoughts on Skagway

We’d love to know what your experiences in Skagway have been. Tell us in the comments below.

We found Skagway to be wonderful destination and would certainly like to visit again. Oosterdam makes her way to Glacier Bay next which is apparently spectacular. 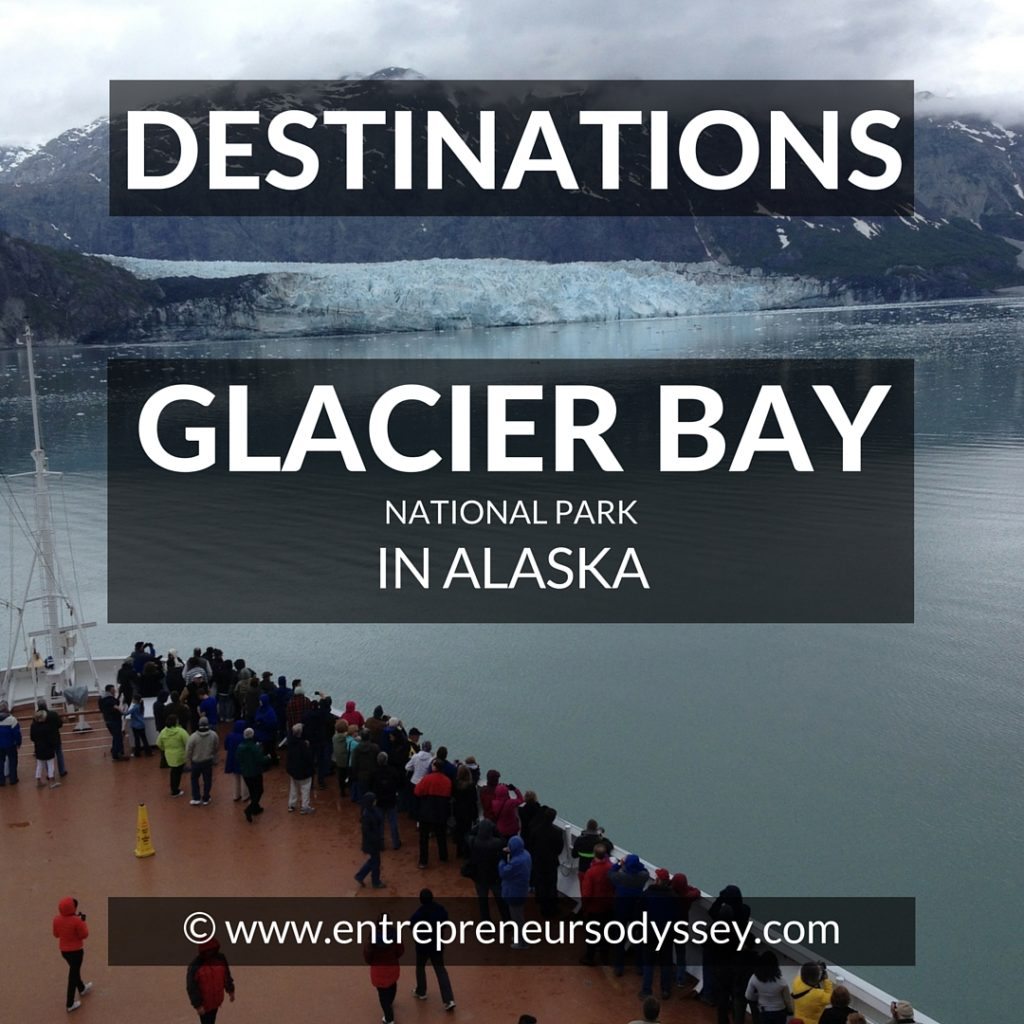