Woke up to the alarm at 5.45am, yes a crazy early time… Moni has her group coaching ladies to attend to, it is pitch black outside with only the lights on land visible as we pass by. It’s nearly full moon and the sea was bumpy, with the white caps rushing past us as we steamed ahead during the night.

A room service breakfast of tea and corn flakes for me with pumpernickel for Moni. After the internet crashed and Moni called it quits, we went to the buffet and had a substantial breakfast before gathering at our meeting point at 9.15am in the Tiger Lounge. Here we were given a number and told to proceed ashore and join the group on the bus.

Tenerife is the largest of the seven Canary Islands and is blessed with a mild climate, beautiful countryside and many seaside towns. Puerto de la Cruz is on the northern coast of the island and is the capital of Tenerife and naturally the main tourist center.

The tour took us out of the port and up inland to the northern side of Tenerife. Leaving the port we pass some classy looking buildings, one that has a slight design like a very famous building, can you see what it is?

Leaving the port on our bus tour

The drive begins in nice sunshine but the higher up we got it became cloudy and continued into the northern side.

We paused at a lookout to take in the view before heading to our first designated stop.

View over part of Tenerife

The first stop was to be the Botanical gardens, however with today being Good Friday and a public holiday it was closed.

All was not lost… very close by was Tenerifes’ oldest garden.

The Orchid Gardens ‘Sitio Litre’, is 220 years old, also the home to the oldest & biggest Dragon tree, and a place that was once visited by Agatha Christie. 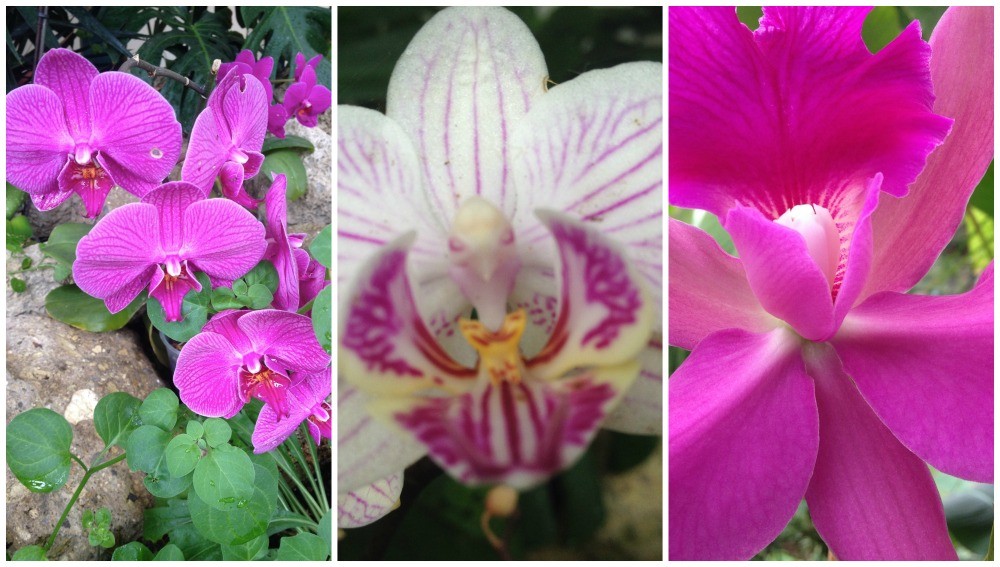 Orchids at the Orchid gardens in Tenerife

After about 30 minutes here we made our way to the town centre of Puerto de la Cruz down by the bay where we had over an hour of free time and so we wandered around.

Back with the tour group and our stressed tour guide that was very concerned that we stay close together and always counted us when as a group. The bus took us back to the port, with our guide giving local commentary.

No, it’s not the Sydney Opera house gone wrong, it’s the Auditorio de Tenerife “Adán Martín” but through its design and looks Tenerife has also been called “The Sydney of the Atlantic”. It is an auditorium that can be used for many events, with seating for 1616 people.

As you probably know, we’re not that keen on group tours and this one will not rank high on the must do list, though we did have some fun with our Aussie friends. A visit to Puerto de la Cruz is well worth going, and I’m sure that you could share a taxi and have a great day out without being herded along like sheep.

At the dock we took some photos of the front of the ship before going on board to have some lunch. 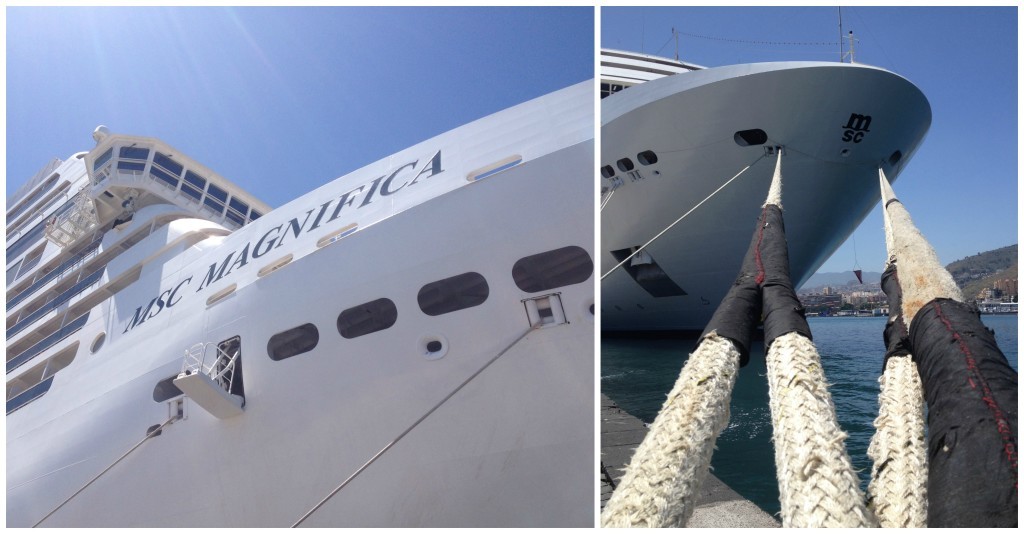 Pizza and salad from the buffet at the rear of the ship washed down with a couple of beers. Marlon spied us and served our drinks as the other waiters were rather slow and un interested to say the least. The plates are looking very worn and not so nice, they could do with replacing… 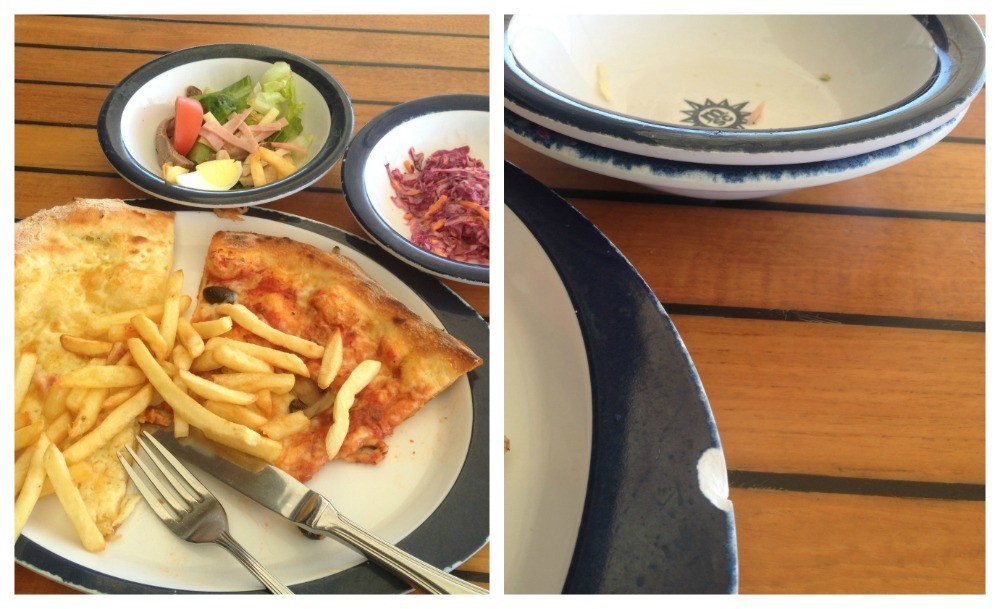 The weather turned out pretty good today after all and with the sun shining at 5.05 we pushed away from the dock to head out to sea again. The trade winds are blowing and the first part is a bit windy and bumpy but it soon passes as we get further away from Tenerife. We took time out to soak up some sun in the deck chairs. 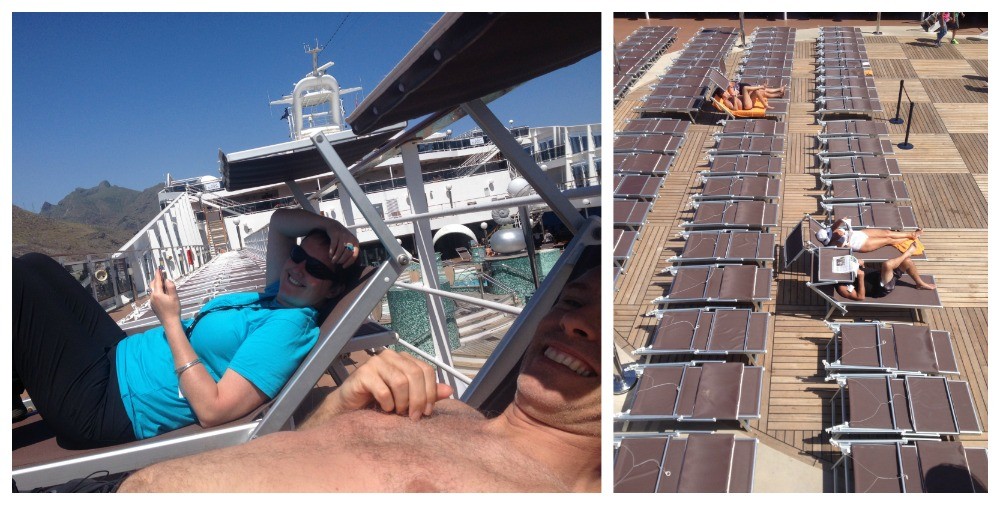 We spent some time chatting to our cabin neighbours who spoke good English and are from Zug in Switzerland before getting ready for dinner at 7.30 and join Chris and Shirley at our table. 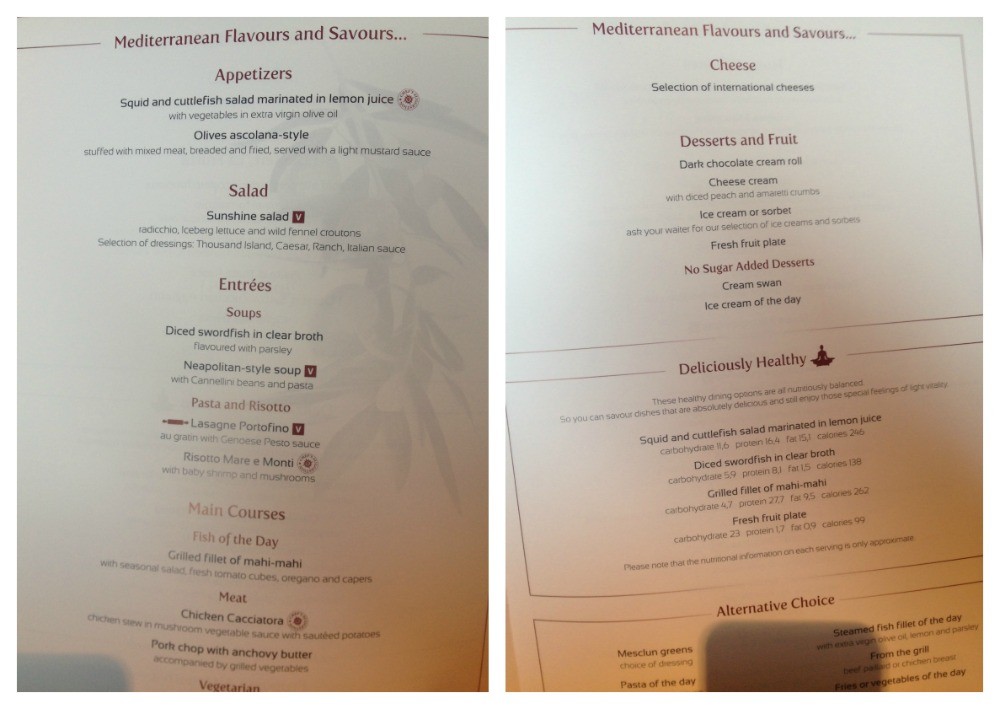 Picture sequence from left to right.

Dinner was fine and Marlon looked after us very well. After dinner we went for a drink in the Tiger bar with Chris & Shirley which turned out to be a couple of drinks, before heading to the cabin at around 11.45pm.