The view from Orisson Auberge on the Camino 2015

Our first night on the Camino we stayed at the Auberge Orisson in Orisson which is one of only two places to stay on the way between St Jean Pied de Port and Roncesvalles.

Side note here; I’m really not sure if we would have managed to complete the entire stretch between the two towns with a total of 25.1 kms and an altitude climb of up and over 1450 metres at the top (Col de Lepoeder) from a 200 metre start finishing at 950 metres above sea level.

I’m writing this now having completed the walk the following day into Roncesvalles and it was tough.

We arrived with the surrounding area in low clouds and not much of a view from the deck.

Refuge Orisson on the Camino 2015

The Auberge Orisson is really very nice and well run and maintained, we would highly recommend it. 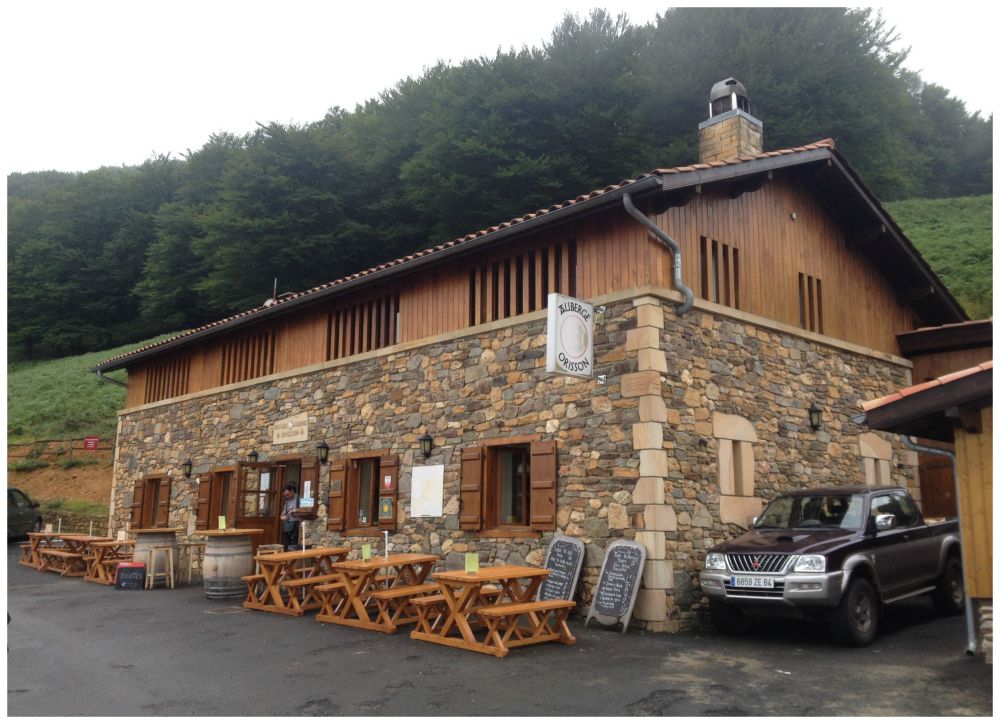 Auberge Orisson on the Camino 2015

This was our six bed dorm which we shared with a lovely couple from Poland, Waldi & Anna.

A six bunk dorm at Orisson on the Camino 2015

After checking in we deposited our stuff and took a five-minute shower, we had each received a token for a maximum of five minutes of hot water and it actually cuts off. Anyway it was long enough to shower and was our clothes.

Next we had some lunch in the restaurant below washed down with a well deserved beer.

lunch cost 10 Euro each and two beers cost 7.50 Euro and an espresso was 1 Euro

Lunch at the Auberge Orisson 2015 The Camino

Next we had a couple of hours sleep before chatting with our room mates and then going for dinner.

All the pilgrims gathered in the restaurant and enjoyed a lentil soup followed by roasted chicken legs and some mixed vegetables stew. For dessert we had a typical Basque Tart which was delicious, in fact the entire meal was very nice and not to forget the flowing wine which topped it all off.

Pilgrim dinner at Auberge Orisson on the Camino 2015

The company was also good and many a conversation was had among the pilgrims. We met up with Getina who we saw at the Auberge in St Jean Pied de Port and some new pilgrims, Wolfgang from Germany, Sandro from Bern and Crystal from the Alsace region.

Dinner with other pilgrims and the tables being set for breakfast

As dinner was concluding the staff made the breakfast setting ready and then we retired to our bunks.

We also pre ordered a sandwich for the next day at 4 Euro each.

We would stay here again and can recommend this Auberge.