Today we have our last sea day and I had ordered breakfast in our cabin. We were awake nice and early, showered even before our breakfast arrived. 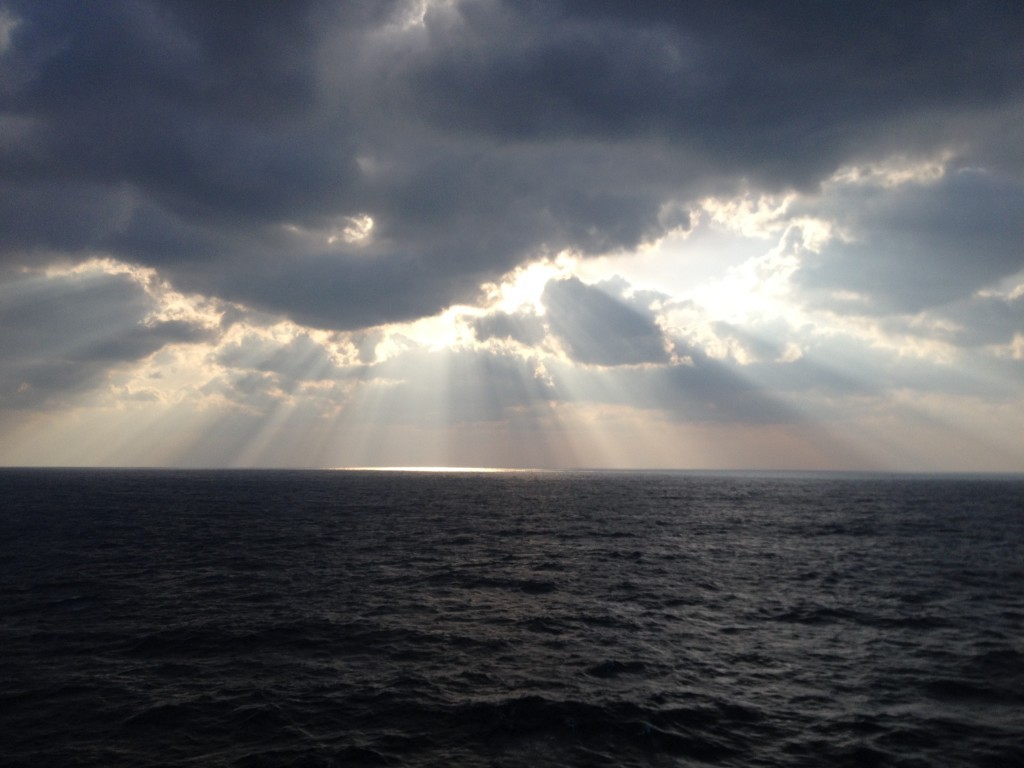 Sunrise on our last morning at sea aboard Queen Elizabeth

“Moni has her nails done on the Queen Elizabeth”

After breakfast Moni had her nail appointment and was gone for an hour, in that time I did the last wash of things and then packed the bags. It certainly is a lot harder repacking the bags once you’re travelling compared to packing to leave home.

Moni with her new nails and me packing

A knock at the door. It was Udo & Christina, we invited them in and we chatted. Fortunate for us, they signed our wills which we have to post when in Japan, talk about last minute… The wills would have been done and posted in Cairns but as you know our plans were foiled…

We then went down and had coffee & strawberry tarts in the Carinthia, and spent a while people watching and chatting.

The guys went and had lunch in the grill and we had pizza and salad in the Lido. We bumped into Steve & Loraine and had a quick chat, they are wonderful people from the USA and we hope to catch up in San Diego.

After lunch, Moni wanted to get on the Internet, but unfortunately, the connection was constantly being stopped. We found out that when in Japanese waters the signal is jammed by the authorities. As a result of this, many Internet users were very annoyed.

We moved from spot to spot to try and connect but no luck. It was down. This is very poor considering that Cunard charge you per minute and after spending all this time trying to load pages etc all for nothing, no wonder people were angry. Moni complained to the reception who said she needed to take it up with the Internet dude. But he was not around until after 4.30pm.

At that time, Moni went down to the Internet centre and complained. After a while, she did receive a refund for the last two hours. He did make all excuses, but if you know my Moni she won’t settle for any excuses or crap. Many others tried including Steve from our table, but he was refused a refund. This is something that the Internet user needs to be made aware of prior to purchasing the package, not when you are in Japanese waters, by then it’s too late .

We changed the left over casino chips to US dollars as we walked through the casino. Then we went and played table tennis with Udo & Christina, which was a lot of fun all I could hear was the girls laughing… Udo and I played for ages, it must have been 20 odd games, of which I think I managed to win just 4… 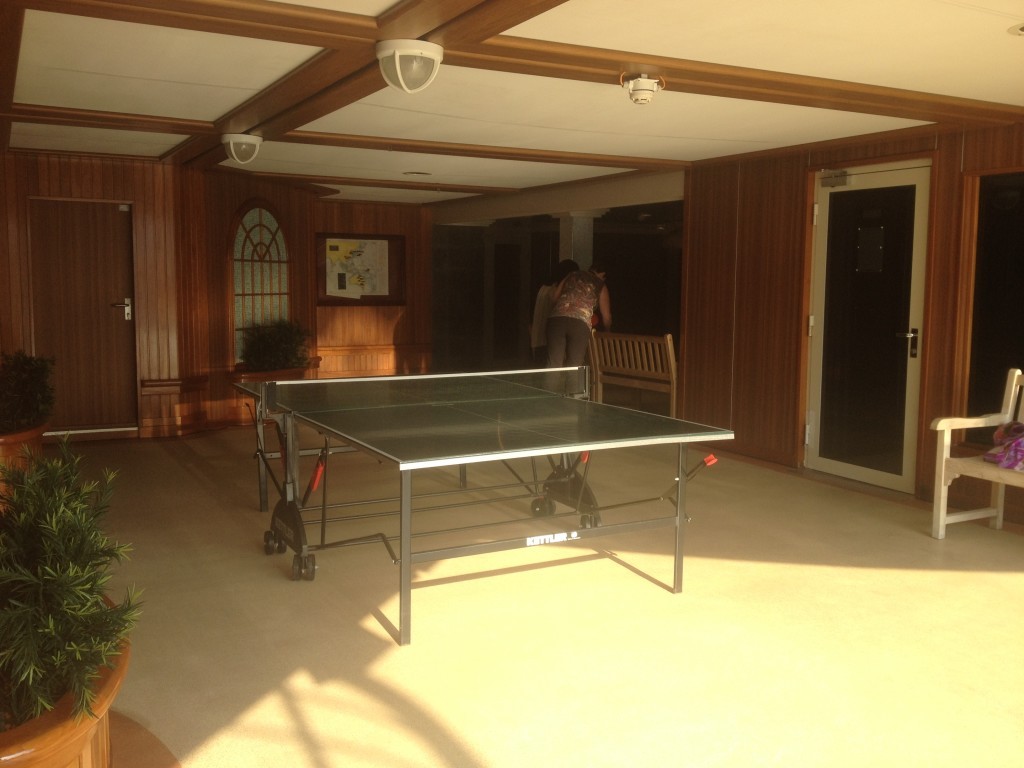 We occupied both table tennis tables for well over an hour

“If we can’t go to the Grill, we will bring the Grill to us, said Udo”

Udo and Christina had kindly arranged to have dinner in their suite tonight with us. If we can’t go to the Grill, we will bring the Grill to us is what they said… We had to pre-order our meals earlier in the day which was no problem, so after our table tennis marathon and a quick look at the setting sun, it was back to the cabin to get dressed.

Udo & Christina have a suite on deck 7 and also have a dedicated butler who is there for them 24/7. He had set up the table all ready while the guys were out this afternoon. We arrived at 7pm and had nibbles with champagne all served by the butler.

“WOW, can you believe it, we are in a suite on board the QE eating lobster thermidor and drinking champagne… does it get any better”

This was followed by our entrées. I had duck confit ravioli, the girls had tempura prawns, Udo had timbale of aubergine and goats cheese. Marchel, the butler had perfect timing, he arrived just after we finished and cleared away the plates poured more champagne and was gone, only to return about 10 minutes later with our main courses. Udo had venison with classic pomme birne and the three of us had Lobster Thermidor… WOW, can you believe it, we are in a suite on board the QE eating lobster thermidor and drinking champagne… does it get any better. 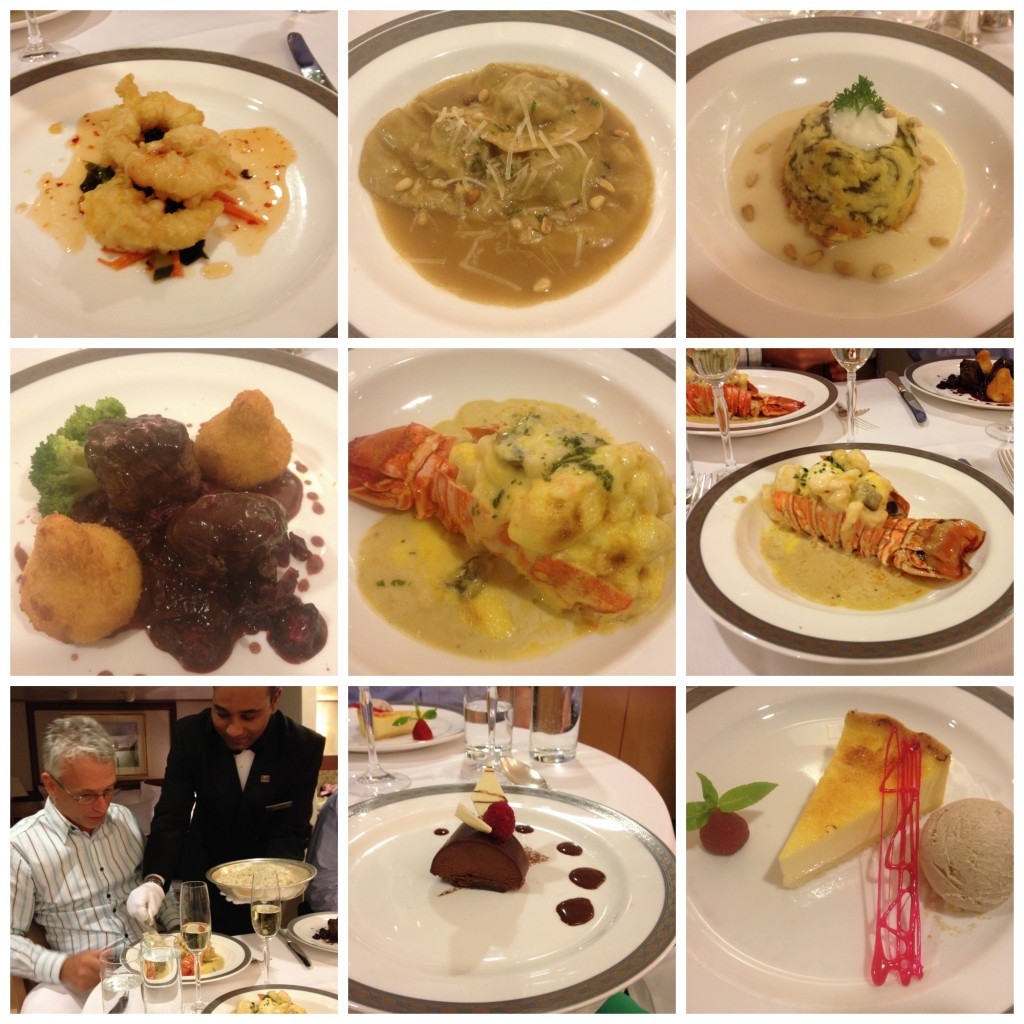 Images from our Grill experience in Udo & Christina’s suite

“To say it was delicious would be an understatement”

Then as before Marchel arrived to remove our plates, before setting the cutlery for dessert. Udo and I had creme brûlée tart, Christina had chocolate something and Moni ice creams, we all had coffees as well. Marchel then left us to enjoy. Udo opened his next bottle of choice which was whisky so we enjoyed that straight up on the rocks… It was now just gone 9pm and Moni and I wanted to visit our regular table in the Britannia for the last time and the guys were going to the show. So we said goodnight and headed to the restaurant.

We joined our table just in time for desert and a cup of tea. Incredible how you can go from place to place onboard just eating as you please, except the grill, lol, but we got around that one writing this with a big smile. We enjoyed the final hour or so at our table and exchanged emails etc and had a few photos with the group.

Last evening in Britannia, us with Ivan one of our waiters

The lights from the city of Yokohama came into view and we made our way back to the cabin. We put our bags out for collection which you must do before midnight with your tags on ready for disembarkation. With our warm jackets on we made our way to the top deck to watch as we entered Yokohama.

The captain said earlier in the day that we have 2.5 metres of clearance under the bridge as we enter the harbour, which needs to be timed to perfection. It was looking a lot closer than that I tell you, but we made it, and it’s not long before we come alongside.

From a distance, you couldn’t see, but the closer we got to Osanbashi pier you could hear the huge amount of people who were out even at this late hour waving and cheering as the QE docks. The atmosphere is awesome with the lights of the city as a beautiful backdrop. 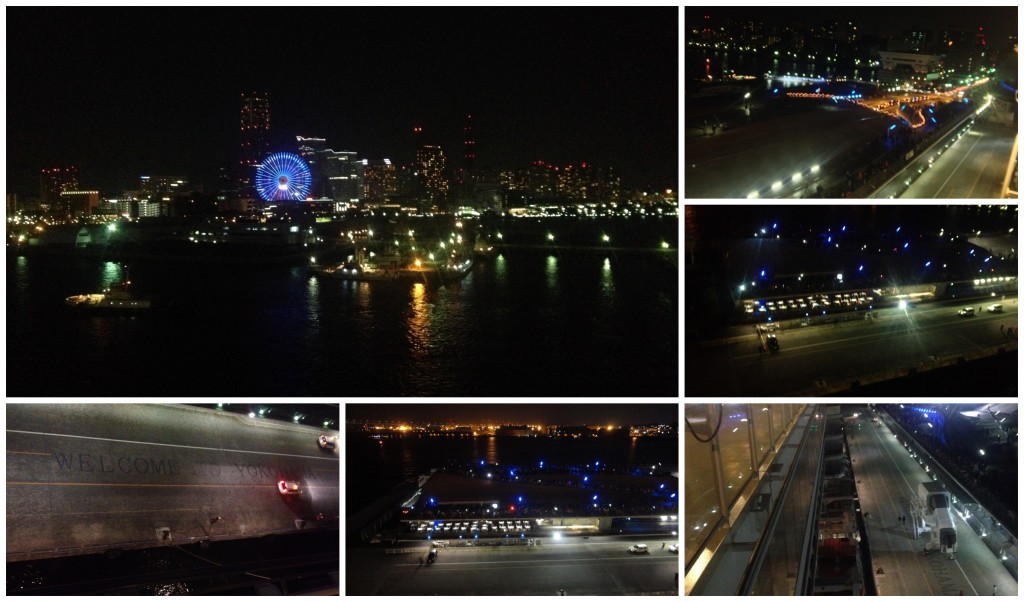 Yokohama city lights from the deck on Queen Elizabeth

Once we have docked and settled down from all the laughing with Dene, Steve, Carol and Peter singing and cheering, we say goodnight and head home for our last night onboard. 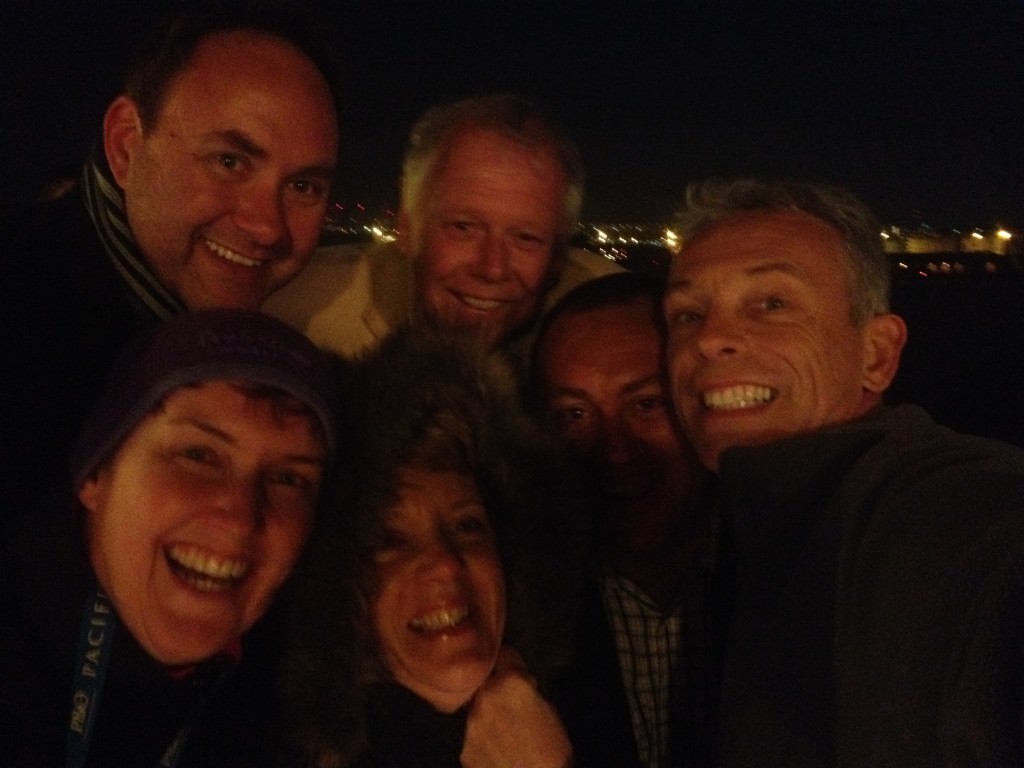 I pop back out to fill up our water bottles and make some photos, it’s late, 1.30am and only a few people are about. I notice some of the crew going ashore for a night out, good for them.

Last night’s sleep in our cabin on board Queen Elizabeth…

Tags: Brisbane to Yokohama, coffee & strawberry tarts in the Carinthia, Internet at sea in Japanese waters, Last evening in Britannia, Lobster Thermidor on Queen Elizabeth, Moni has her nails done on the Queen Elizabeth, Packing for a cruise, QE alongside Osanbashi Pier, Queen Elizabeth cruise ship sailing under Yokohama Bay Bridge, Queens Grill on Cunard, table tennis, The lights of Yokohama city, us with Ivan one of our waiters