This morning we arrived at a very cold Petropavlovsk in Russia where the ship is required to use the tenders to get to the shore. It is a dull looking day and the skyline does little to improve it. 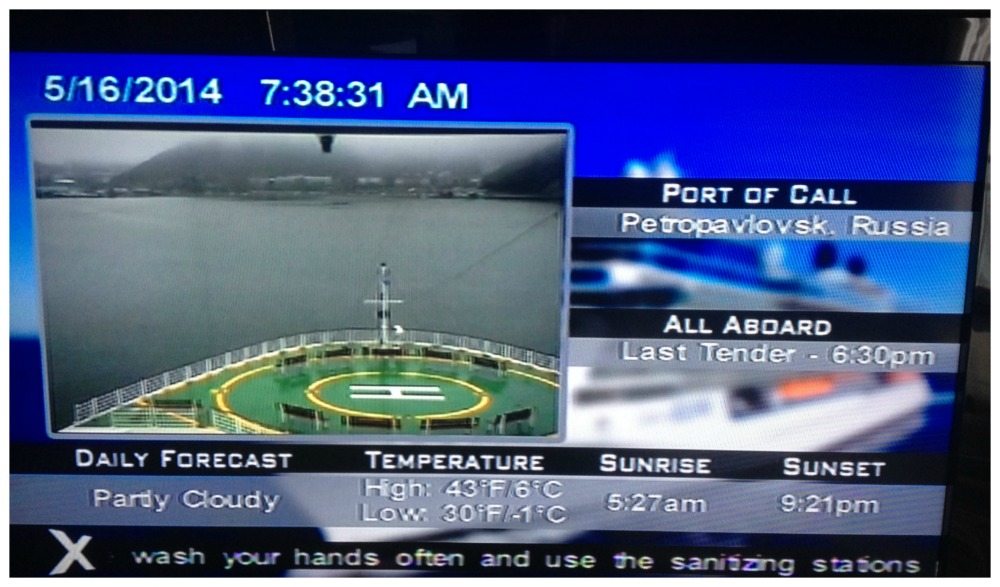 While in Petropavlovsk the Celebrity Millennium refueled ready for the crossing to Canada. 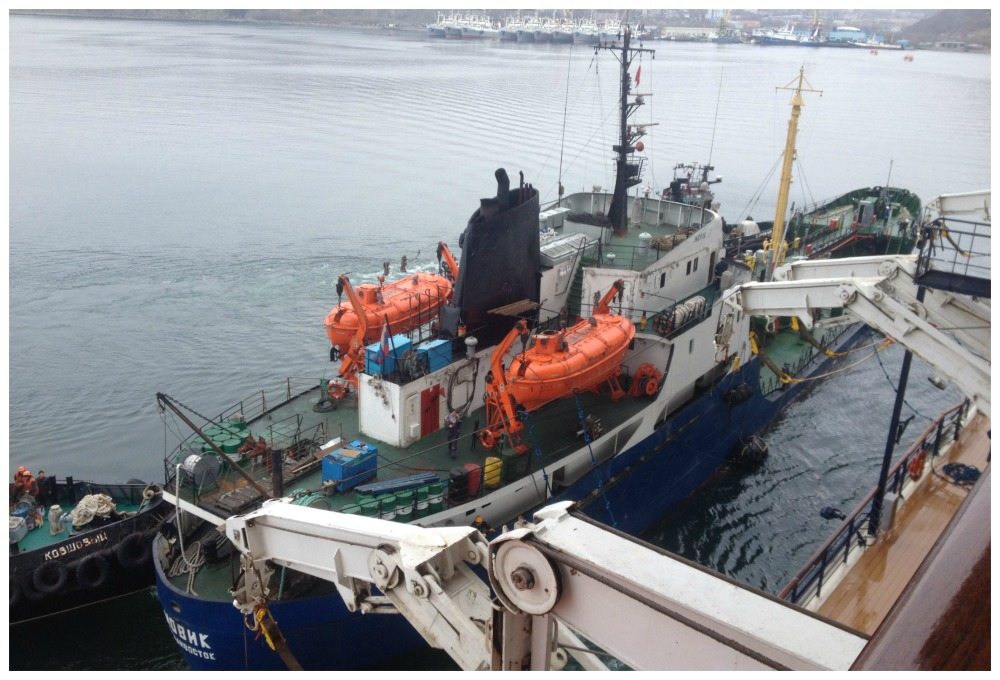 We had been warned that the Russian customs can be rather painful and make the disembarking of the ship very slow as they check every passport. In an attempt to make things easier we were all allocated numbers and asked to wait until called to get off. 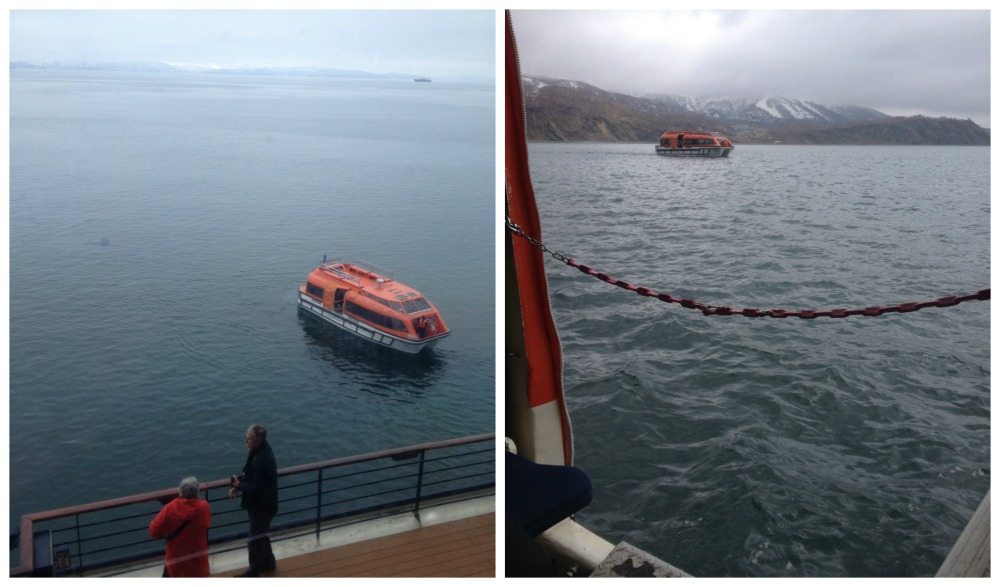 Eventually we are called and head down to the tenders to go ashore, it’s gone midday now and we’ve had a good breakfast and coffee with cake so we are full and ready to explore.

Before we can board the tenders we must pass Russian customs who are already on the ship… with passports in hand we head through passport control. These guys look just like on the movies, sorry no photos but it was cool. I just smiled and he gave me a hand signal to move on. 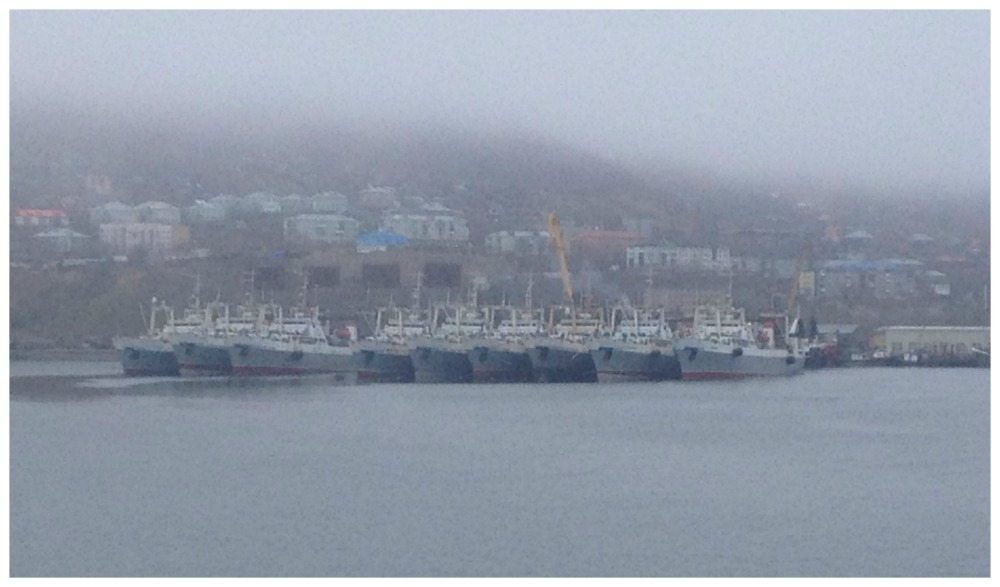 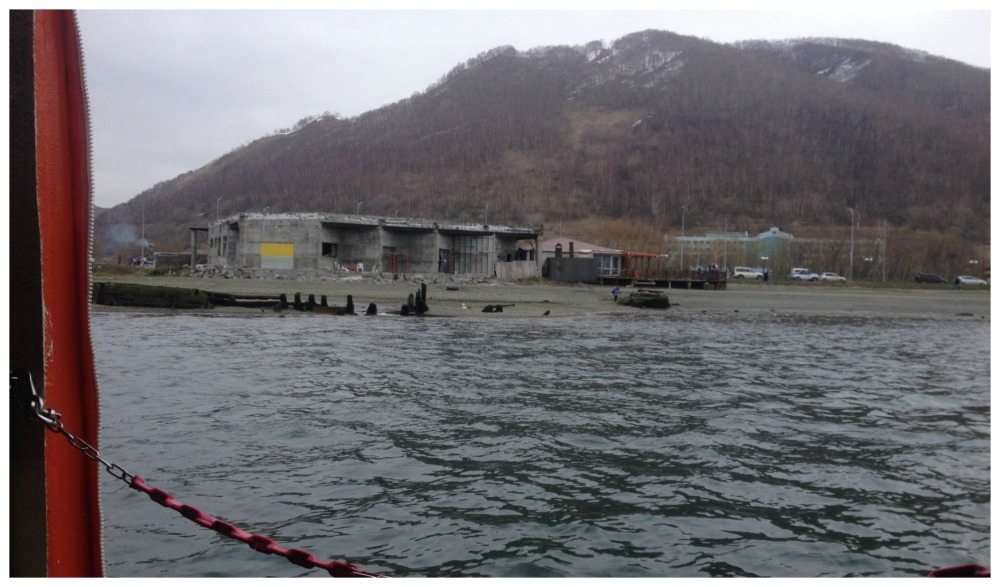 Arriving ashore, the first thing we see walk through is a building where a few people have set up stalls to sell items. Not quite Caribbean style (yet). 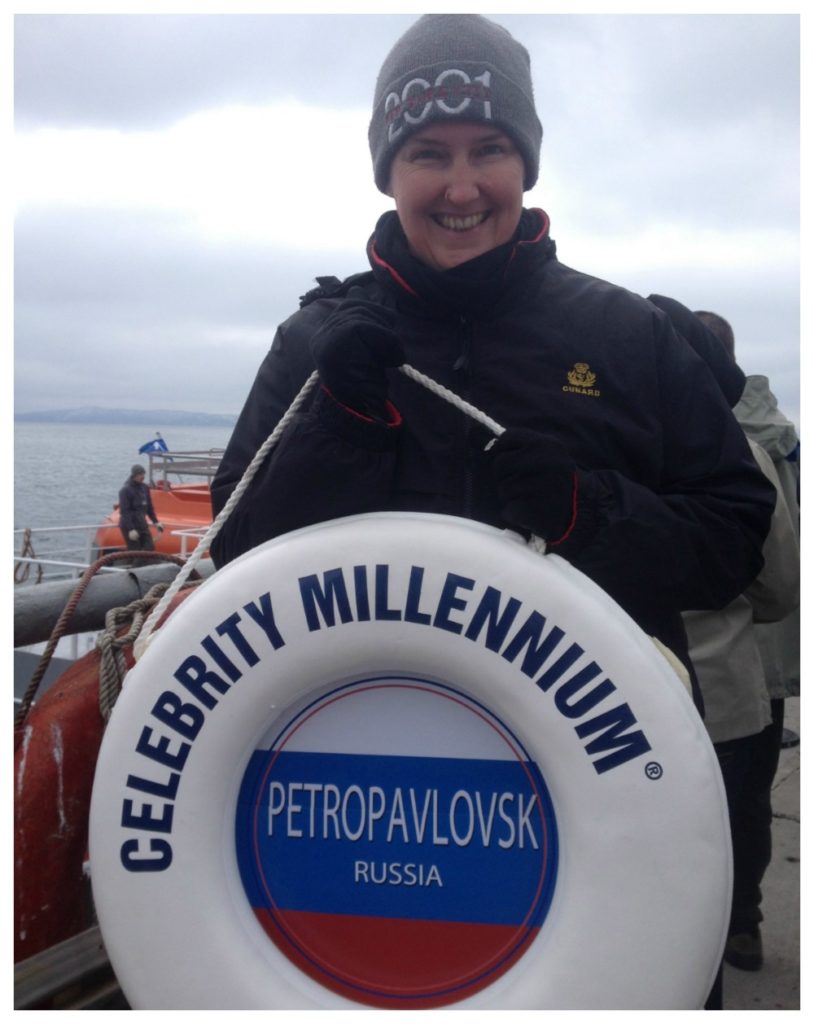 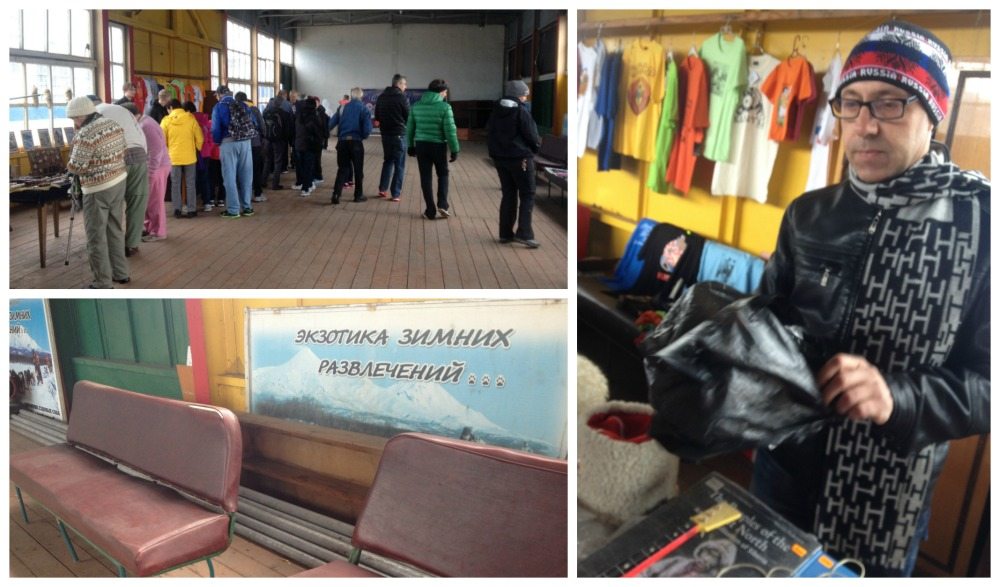 A building where a few people sell items

Moni bought a Russian hat from this guy, his hat!! only kidding he has plenty, but the same one. 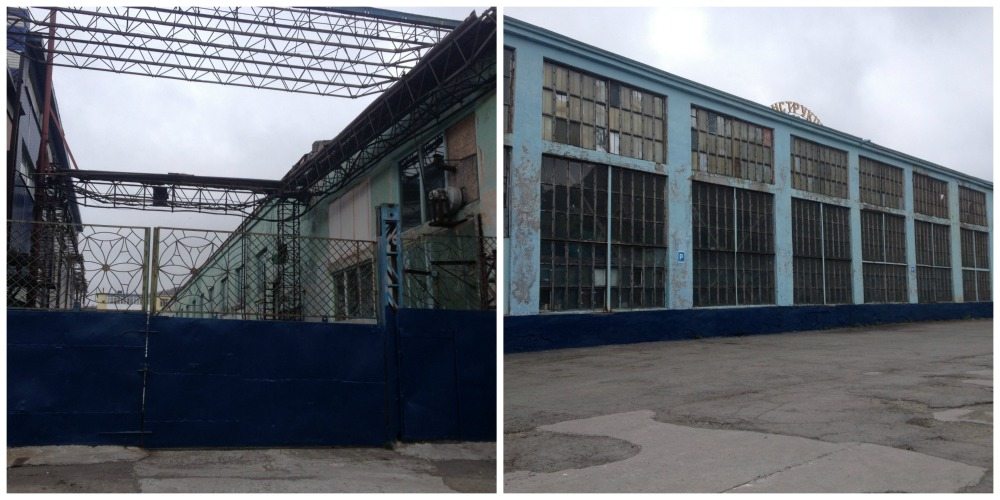 It’s very grey and overcast which seems to fit right in with this place. The area is covered in dust which is ash from the volcano that is shadowing the town, but hidden today behind clouds. 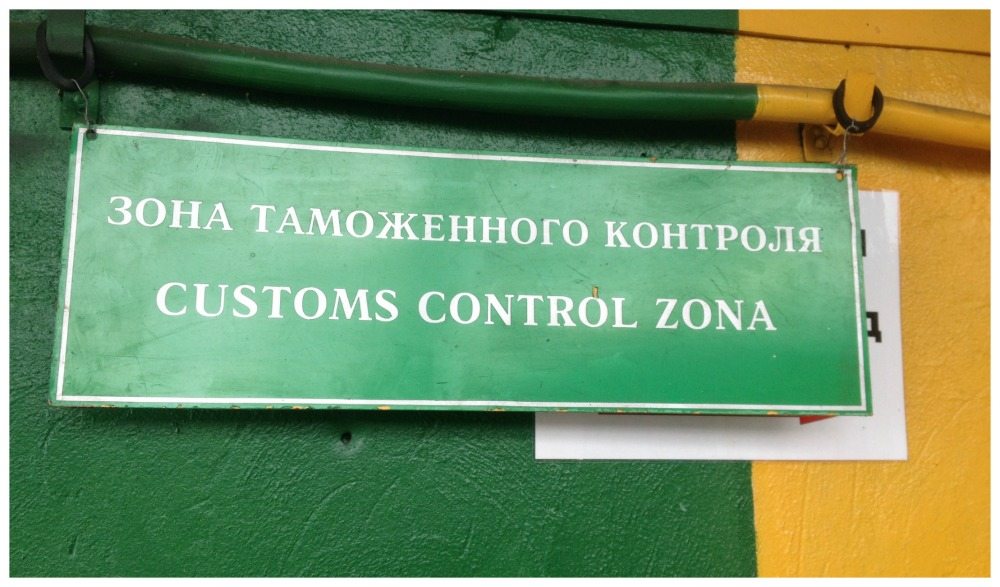 The shore line is just pebbles, but I guess they don’t go to the beach to lay in the sun and play on sand. 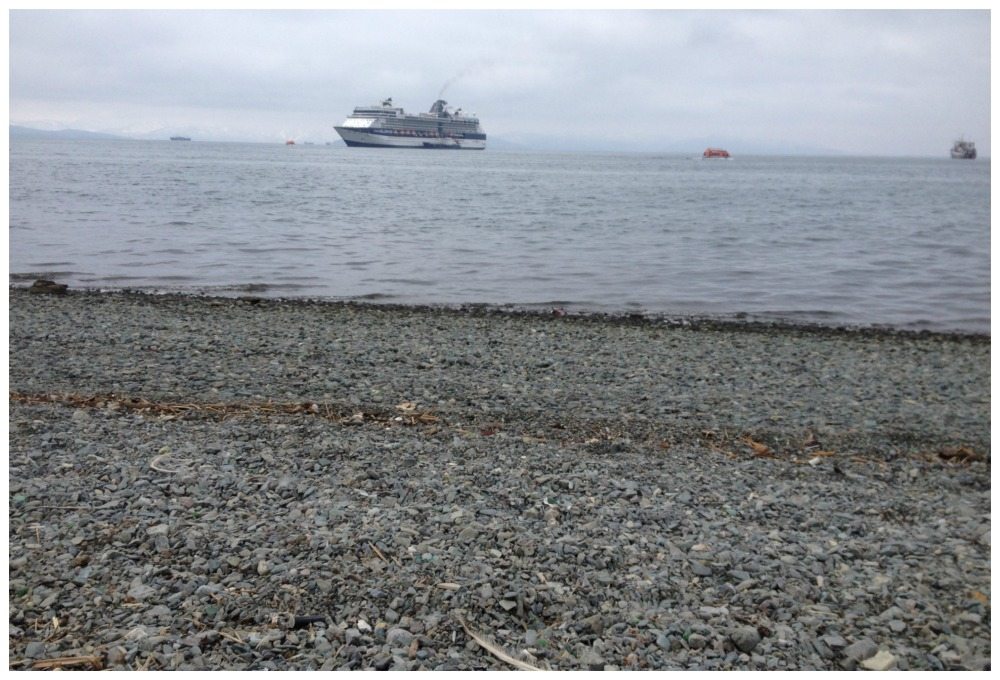 The roads are very poor and the paths are breaking up and falling apart. 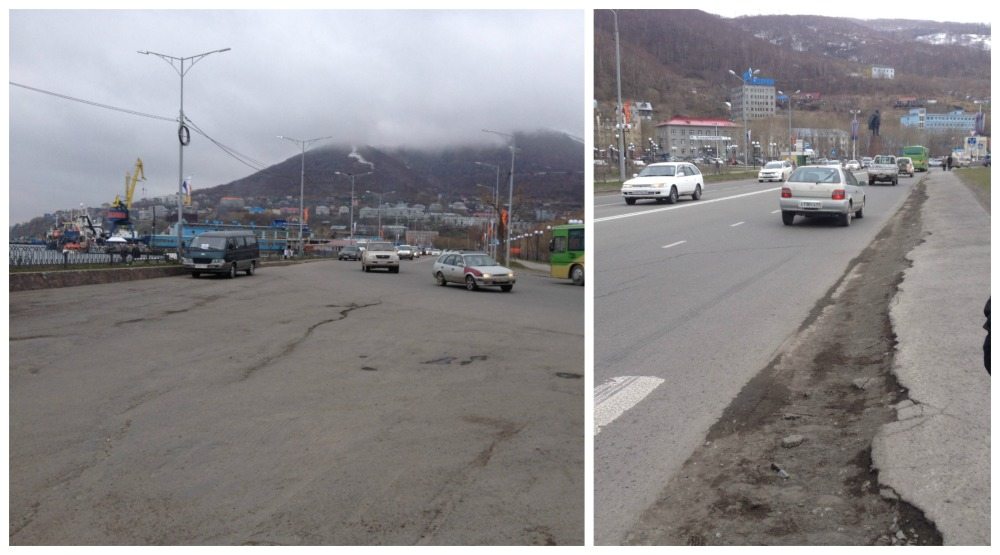 For a place that is only accessible via ship or plane, it sure has a lot of vehicles, and not just old small ones, big 4wds. 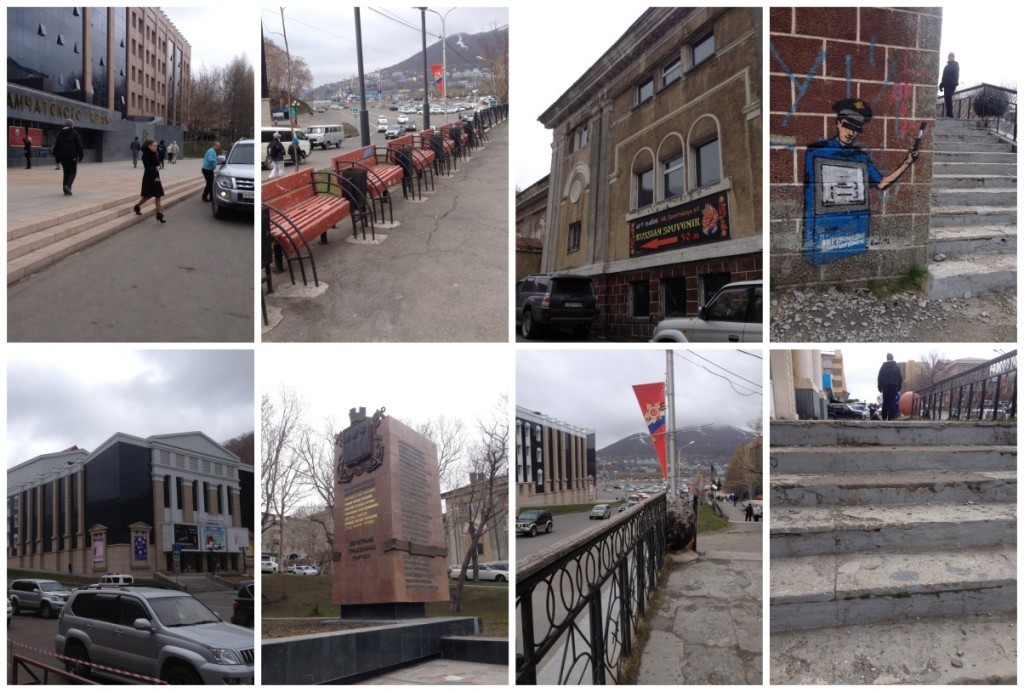 The people seem friendly enough, although some look at you with a strange eye. 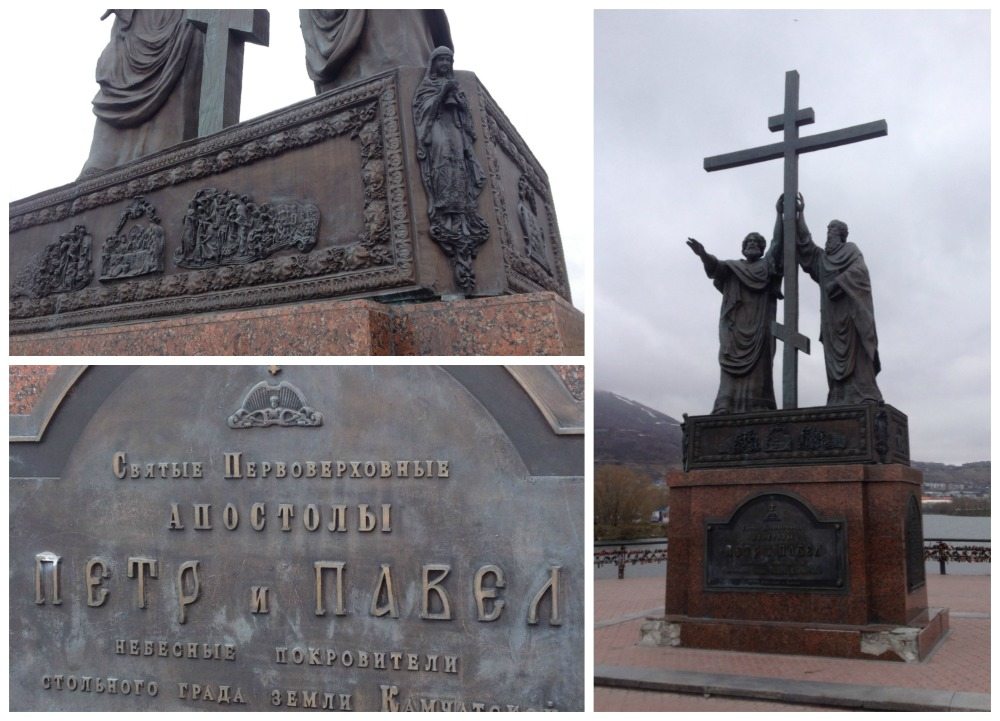 There is a statue of Lenin still standing in the square very typical Russian, overlooking the area.

Statue of Lenin in Ploshad Lenina (square of Lenin)

All the main squares in soviet towns were called after Lenin, but for the last 10 years almost all of them have been renamed, this one still remains Ploshad Lenina (square of Lenin). 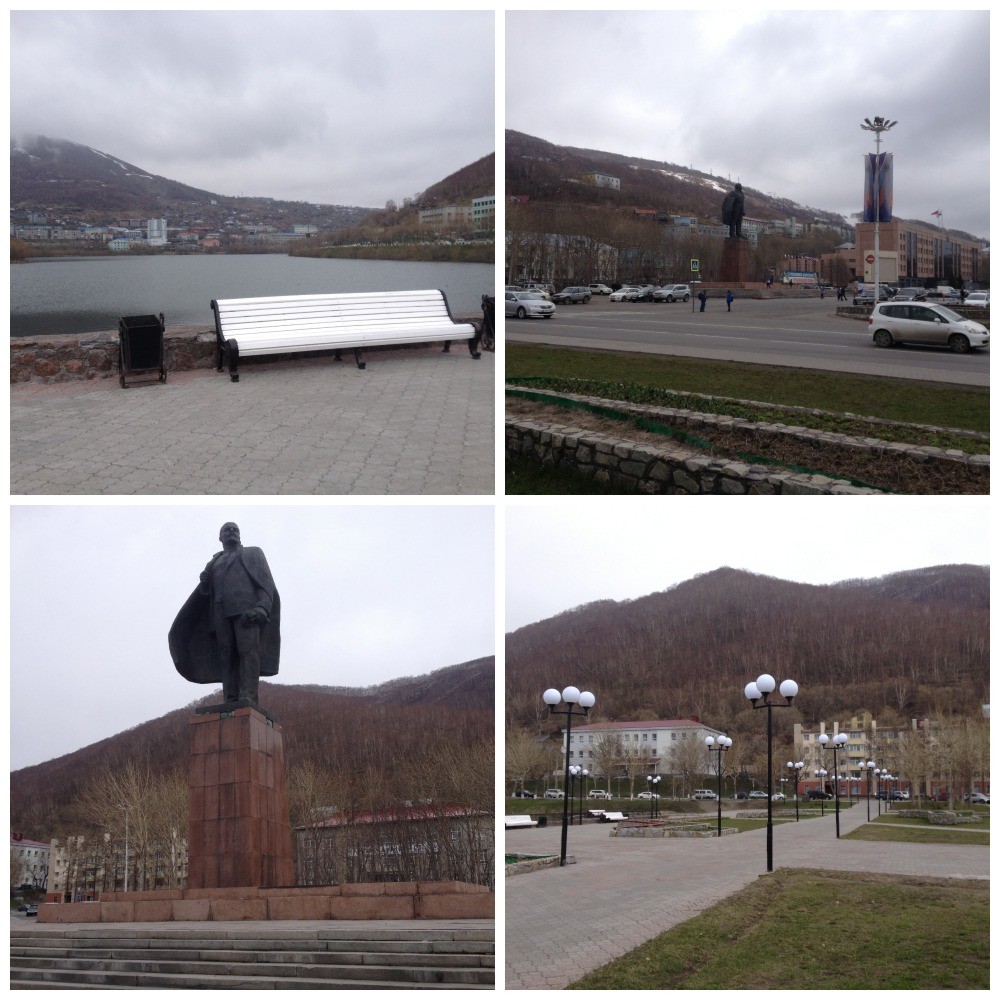 An area in front of the lake with a few chairs has a railing covered with padlocks.

Padlocks locked to the railing around the waterfront in Petropovlovsk

Food shop in Russia & getting some Russian rubles

We take a look inside some building not knowing what we might find, it is a food shop with many smoked salmon on display, the smell is divine if you like smoked flavours. There is a small amount of fruit and vegetables for sale but not much.

Inside one of the food shops

Just next door is a bank and we exchange some dollars for rubles.

getting some Russian rubles

There are plenty more photos to share. As you can see, there are a mix of very run down old buildings and more modern ones. It looks like a slow change is in progress here which I guess is good news for the locals. 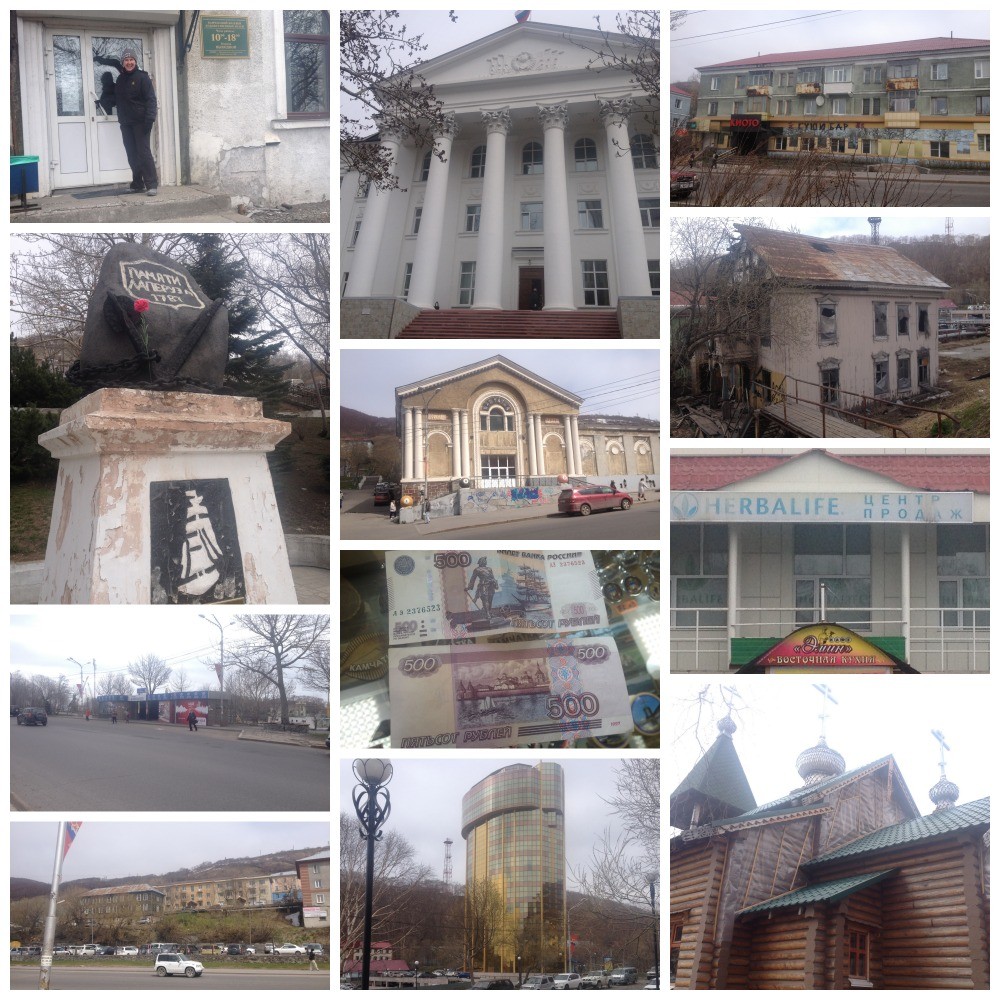 images from walking around Petropavlovsk 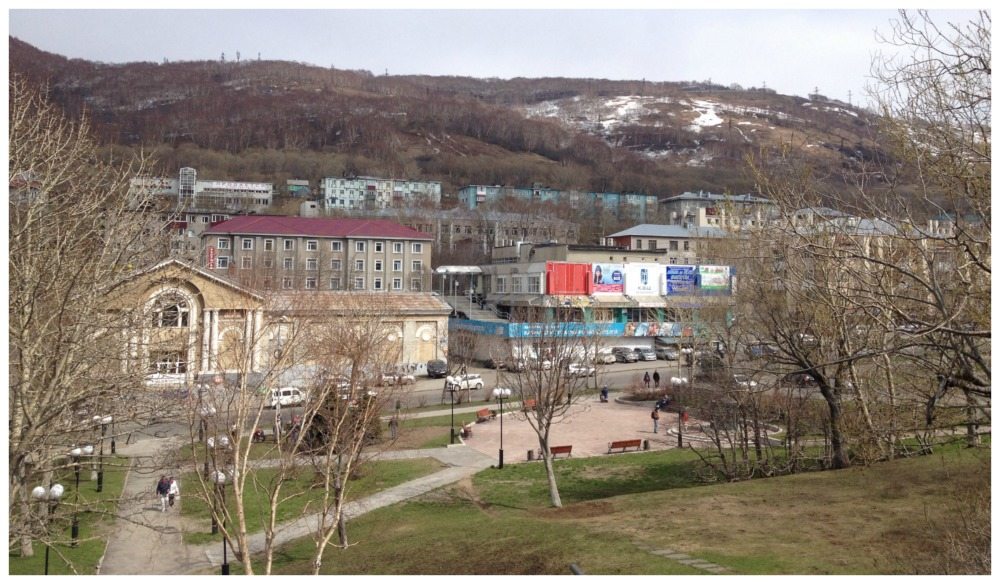 A view from a small hill back into Petropovlovsk town 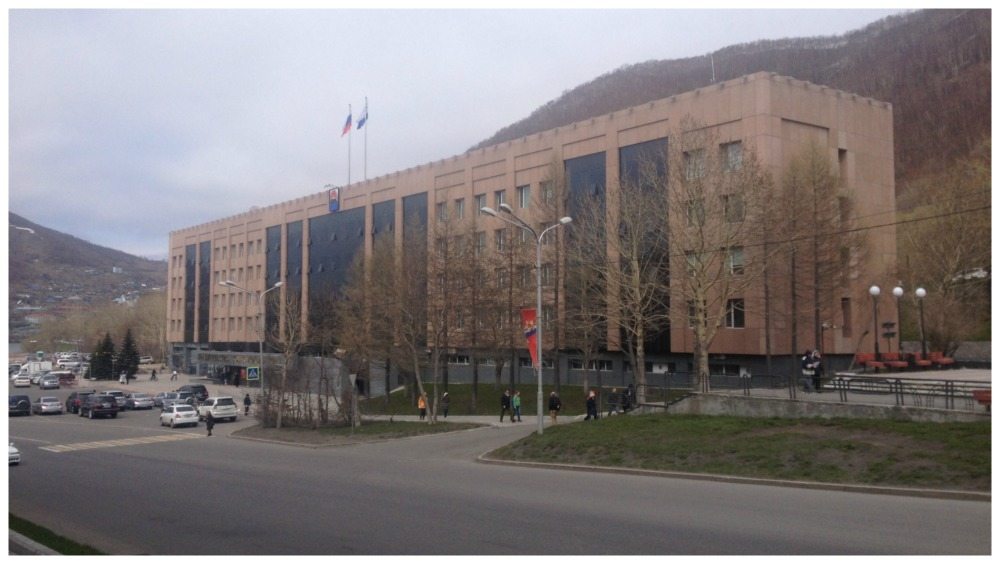 I think this may be a government building 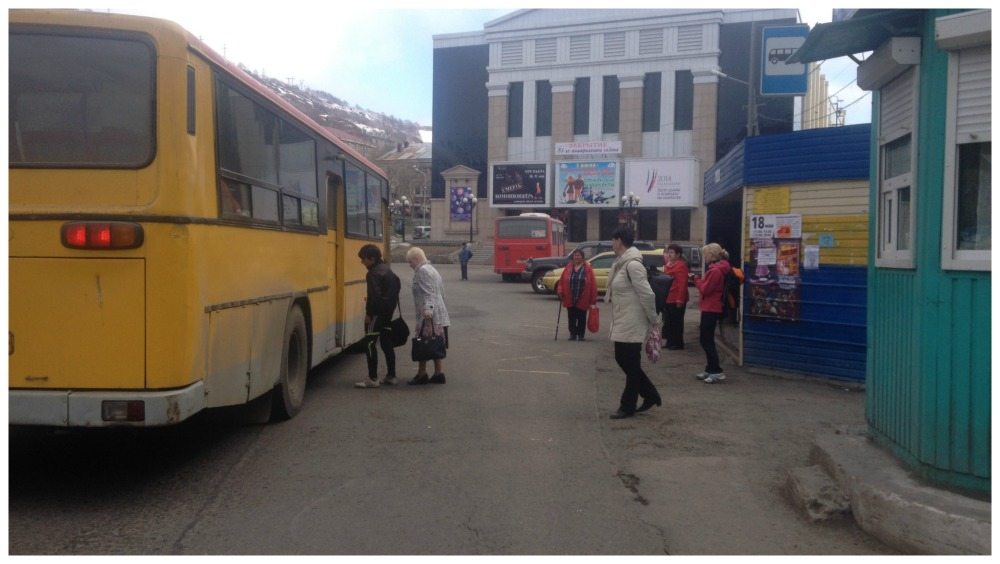 Enjoying a local beer after being given an old soviet flag

We walk around for some time absorbing the atmosphere, sights and sounds of Russia before we sample some local beer in plastic bottles. This one had a strong wheat flavour. Here you can find out more about Petropavlovsk-Kamchatsky. 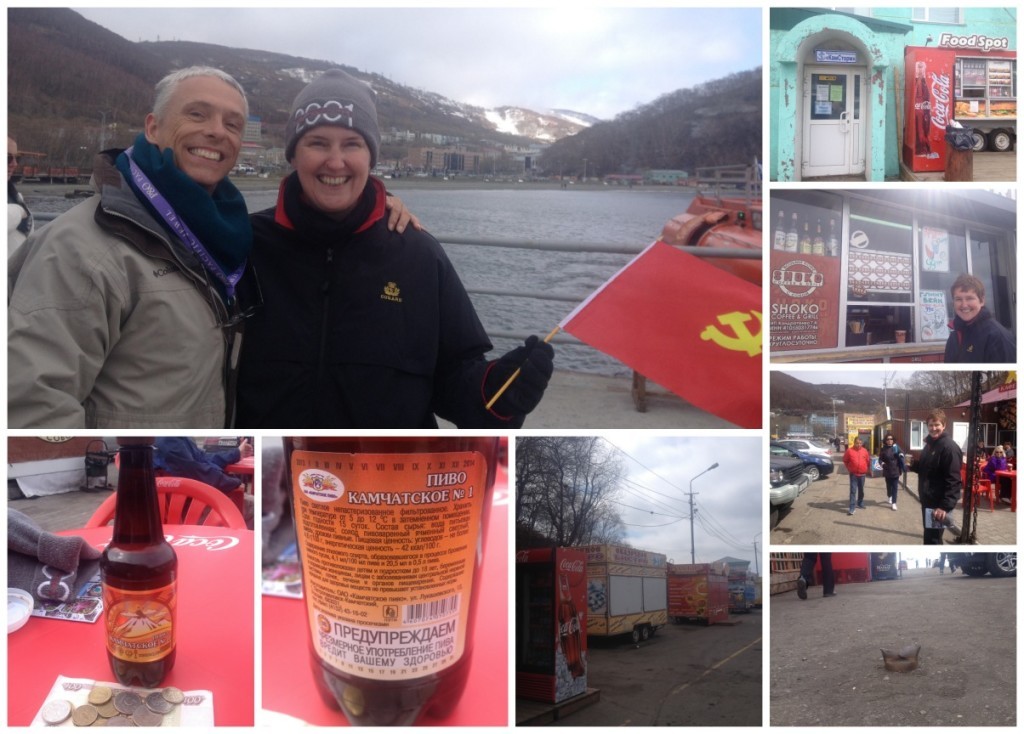 Enjoying a local beer after being given an old soviet flag, be careful when walking…

A panorama of Petropavlovsk-Kamchatsky bay before heading back to the ship.

On the tender back to the ship the sun breaks through 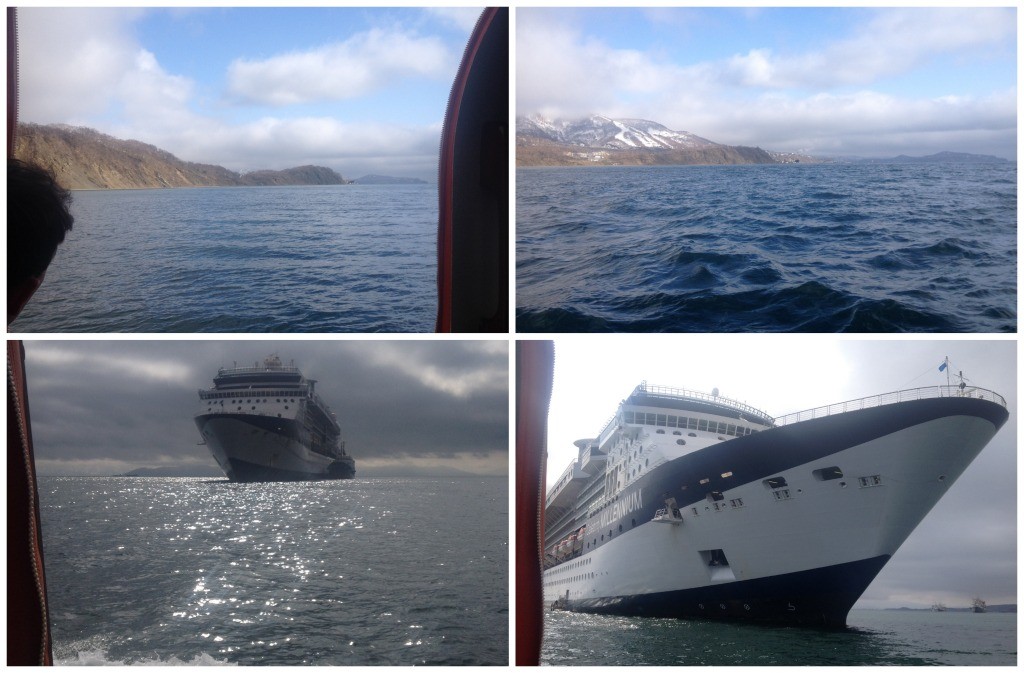 We have mail from the Captain

Back onboard we have mail from the Captain… WOW we have been invited to join the F&B manager at the Captain’s table for dinner tomorrow night, how cool is that. 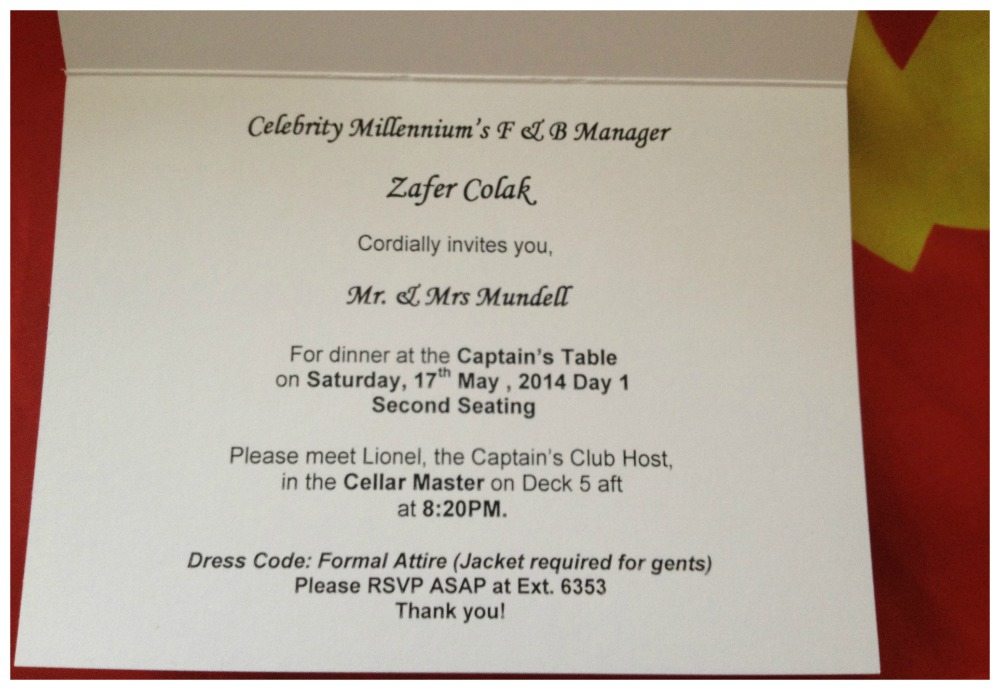 Later we find out that the F&B manager has an Australian wife and had requested the restaurant managers to pick two couples from Oz to join them along with two other couple from anywhere.

Next we freshen up and have some wine in the Cellar Masters bar before heading to the show called “Boogie Wonderland” which was very good then onto dinner. 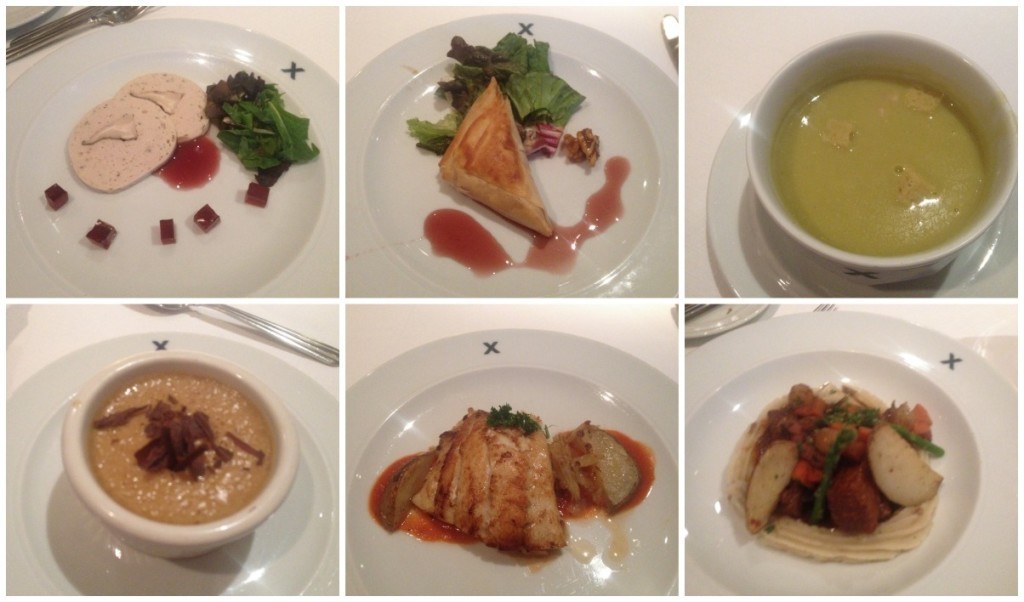 We were due to depart Petropavlovsk at 8pm however Russian officials made the passport checking process a disaster according to Steve the cruise director and hence we didn’t leave until 12.40am.

Let us know in the comments

Have you visited Petropovlovsk in Russia? Would this be a bucket list destination for you? We enjoyed the experience of our first glimpse of Russia and would certainly love to spend more time in this country. Have you stayed in Russia for sometime? Please let us know in the comments below, it would be interesting to read your thoughts.