We awake early to see the land of PNG, more specific the town of Rabaul, East New Briton and the volcano ‘Tavurvur’ smoking in the distance. We are very excited and ready ourselves to hit the top deck for some good views and photos opportunities as we approach the local marina (which is very much just a concrete block). 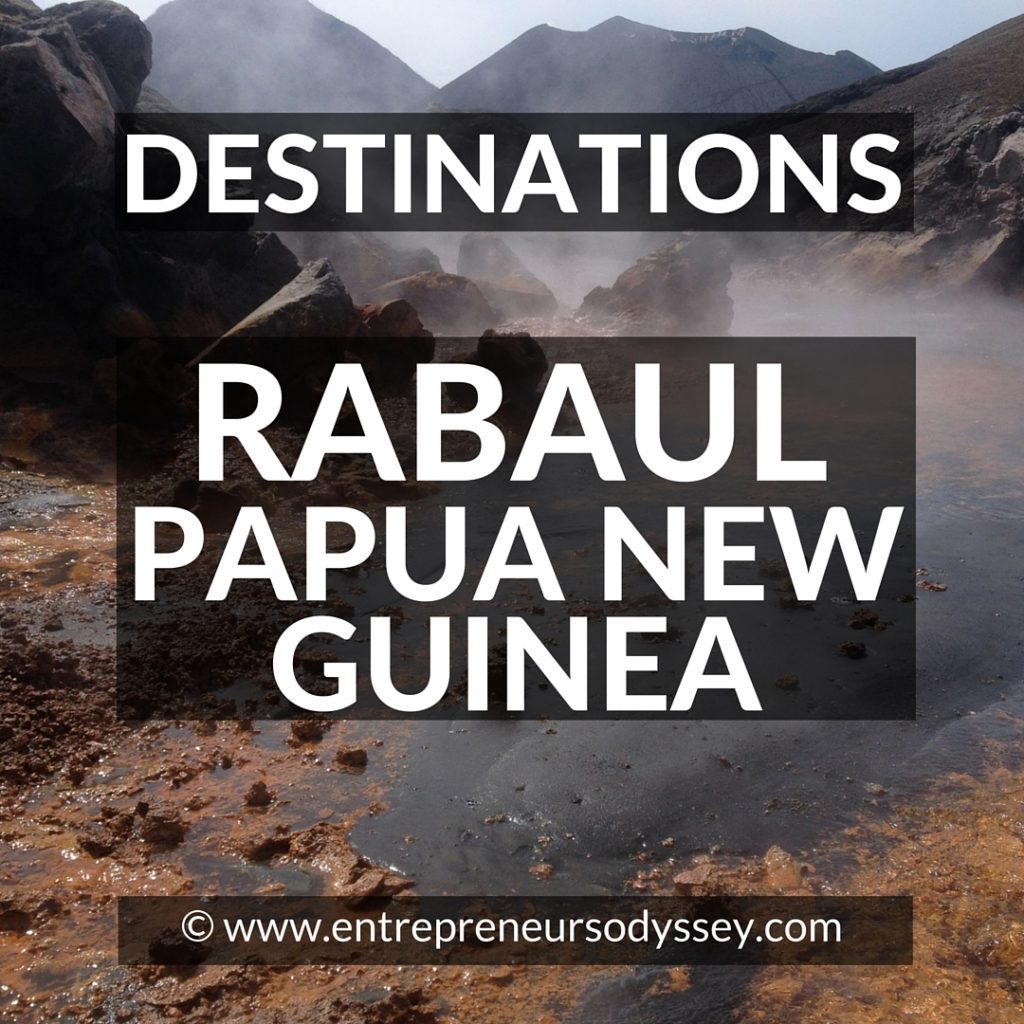 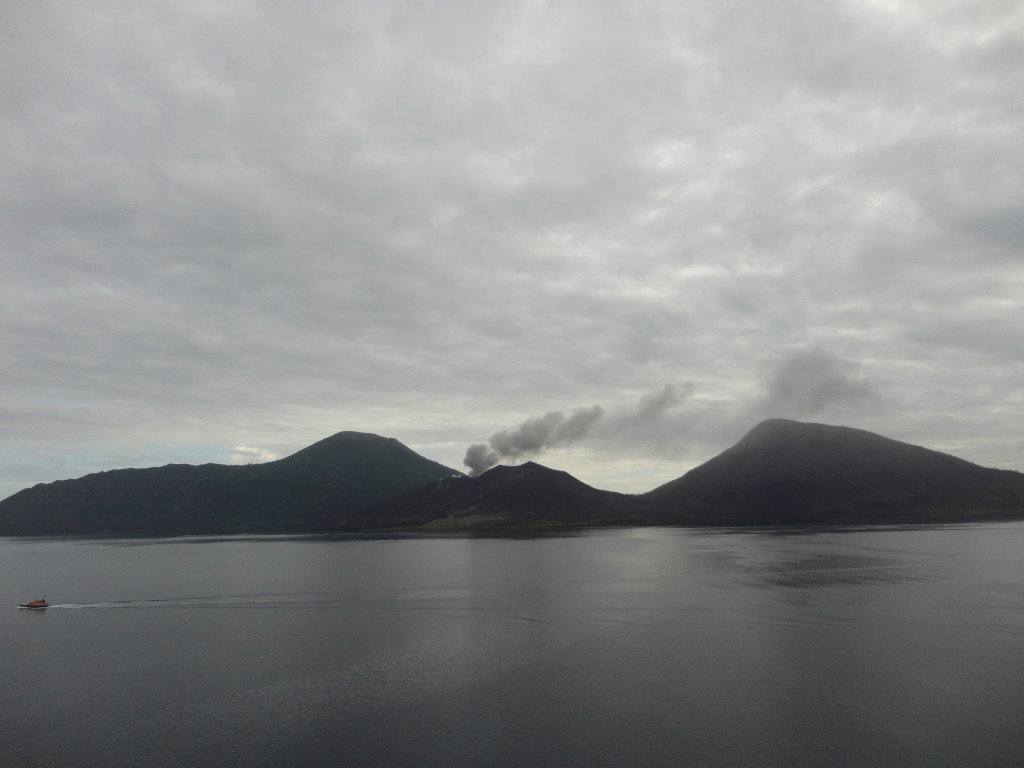 The views are awesome – lush, green and very fresh and dewy. We grab a quick breakfast and then make our way to the theatre to wait for our day tour to be called. We are chomping at the bit to get out there. 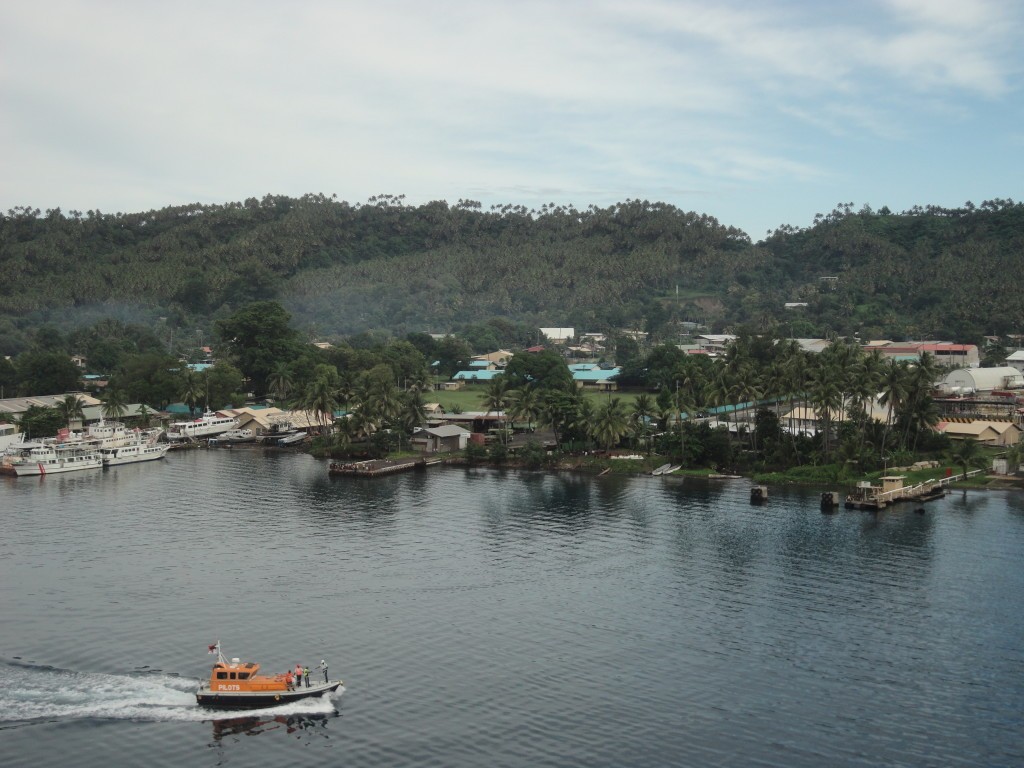 The port of Rabaul PNG

Eventually, our number 13 is called and we are invited to depart, so we set off on our minibuses for our tour. It’s a bumpy ride as the roads here are pretty average, with pot-holes everywhere, specifically designed, (it would seem) to catch on all four tires of our mini-bus in an alternating pattern. 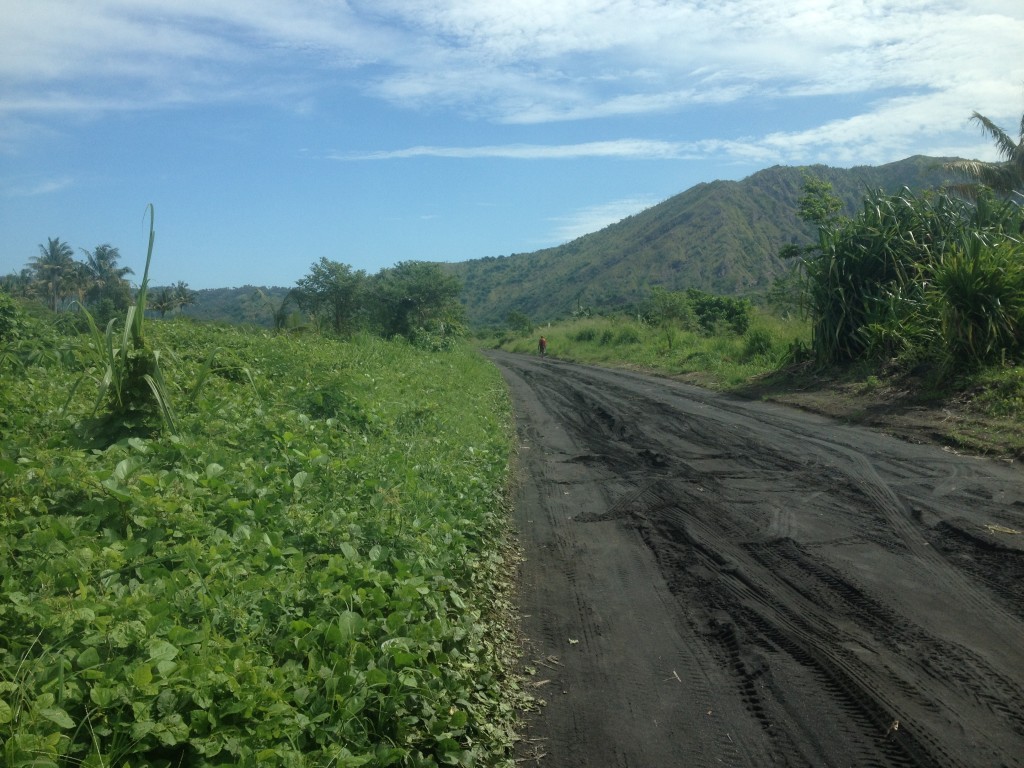 The roads of volcanic ash on Rabaul

The first stop is the volcano Mt Tavurvur and we drive over ash covered terrain, (no real roads just bush tracks) that are marked with posts and only a few signs. Thankfully the locals seem to know where to go and what to do. This bumpy road gives the previous pot-holed thrill-ride a run for its money. Monika is glad she chose to wear her sports-bra today, lol. 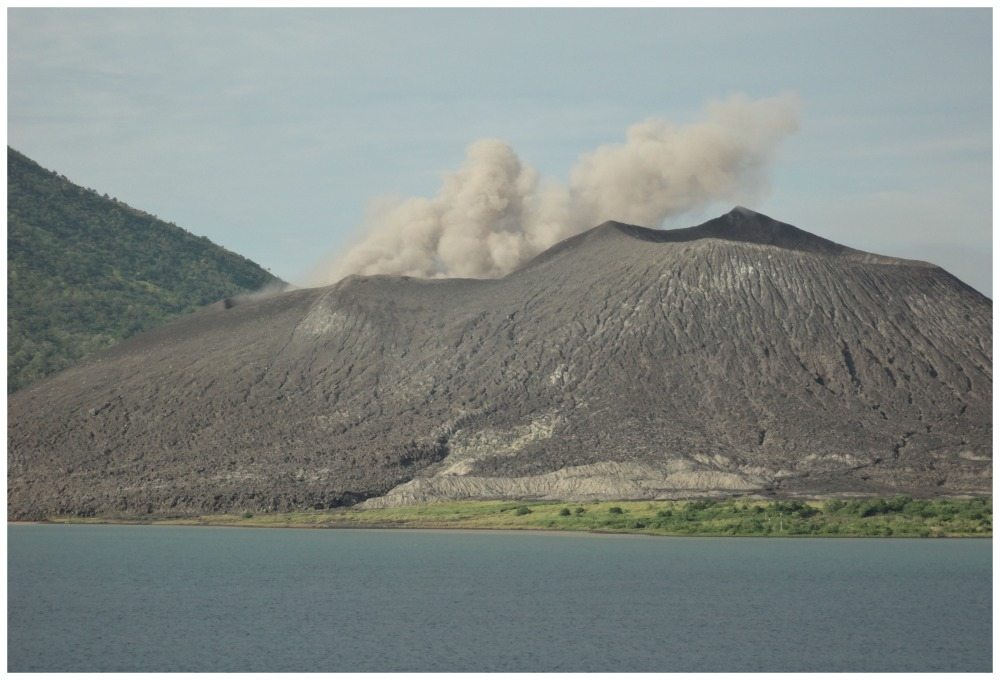 The volcano is active and the last eruption was in 1994 which destroyed lots of the original town area. Today the new town is growing and has a few shops, churches, and schools, plus a hospital and even a hotel!! At the volcano, we get out and have a walk around – the ground is warm and the hot spring is bubbling. The steam has a definite distinctive aroma, but it’s not offensive. Everywhere there is black ash with some reddish tones where the water flows. 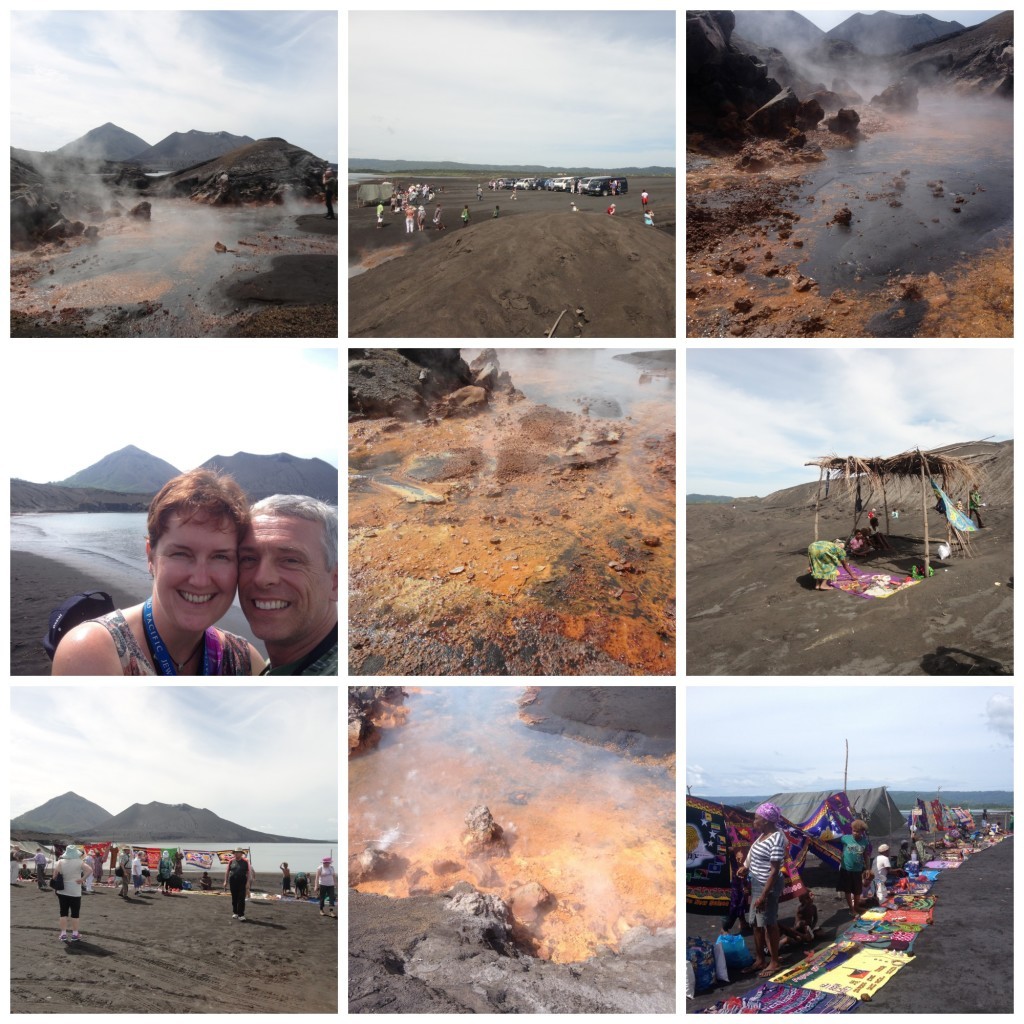 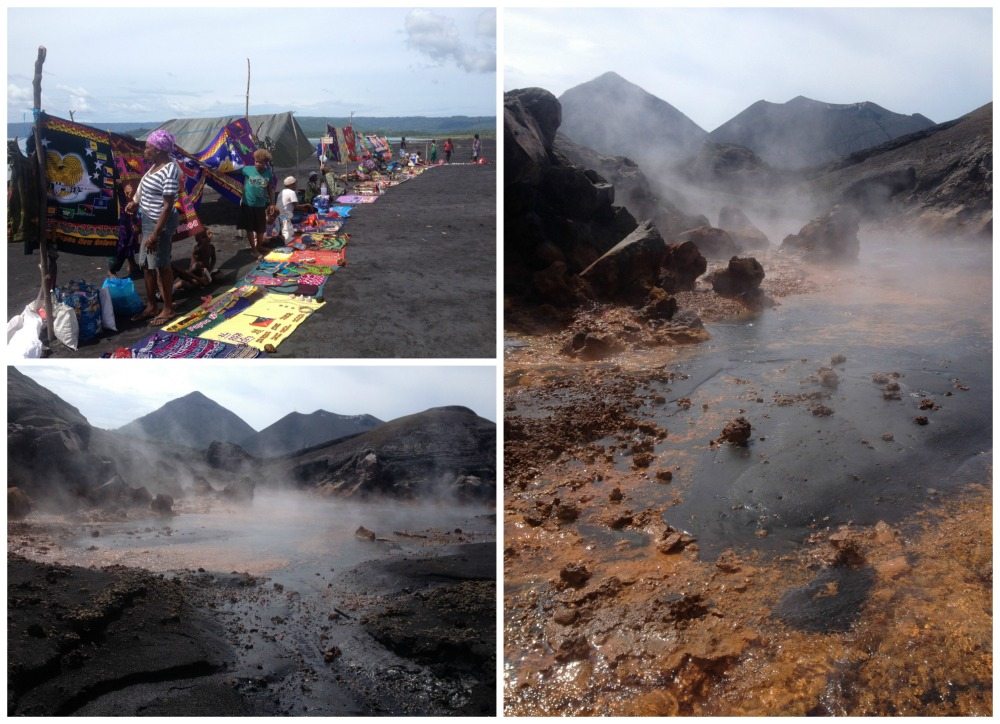 Then we are back on the mini bus to visit the “submarine base”…which turned out to be something of nothing!! This stop on the tour consisted of our group making a few steps through an arched hole, then (while avoiding the incoming tide), we step and climb over rocks to enter what looks like a man-made tunnel. This tunnel forms a u shape that leads back out to the water. I find it quite bizarre that that is the submarine base. Then we climb a few steps to see a Japanese machine gun.

Submarine Base in Rabaul, PNG 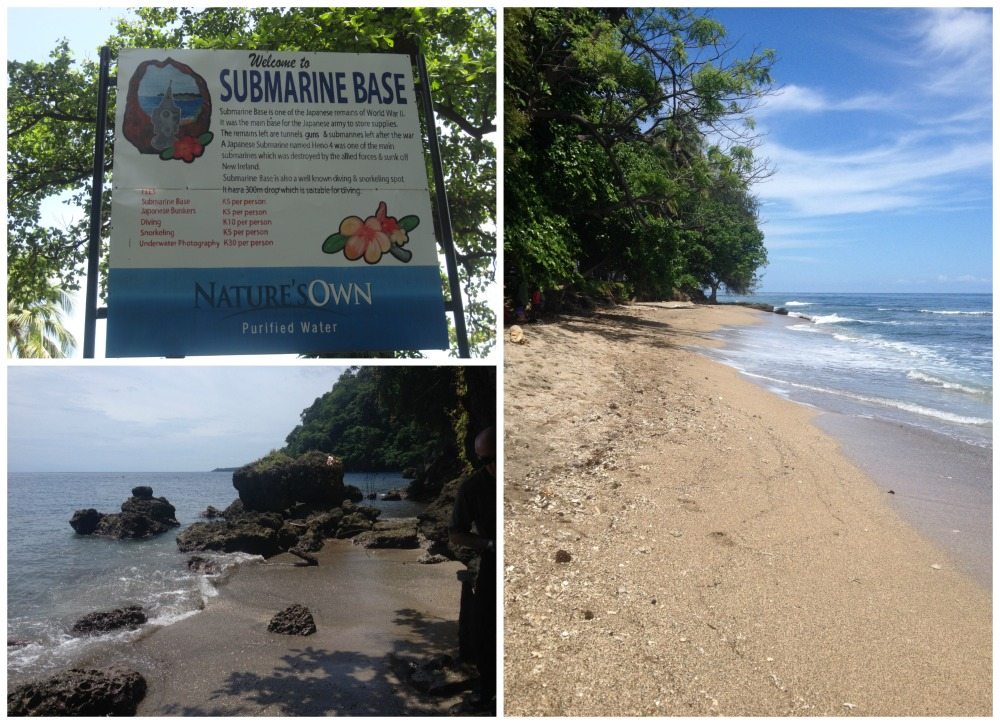 Submarine Base in Rabaul, PNG 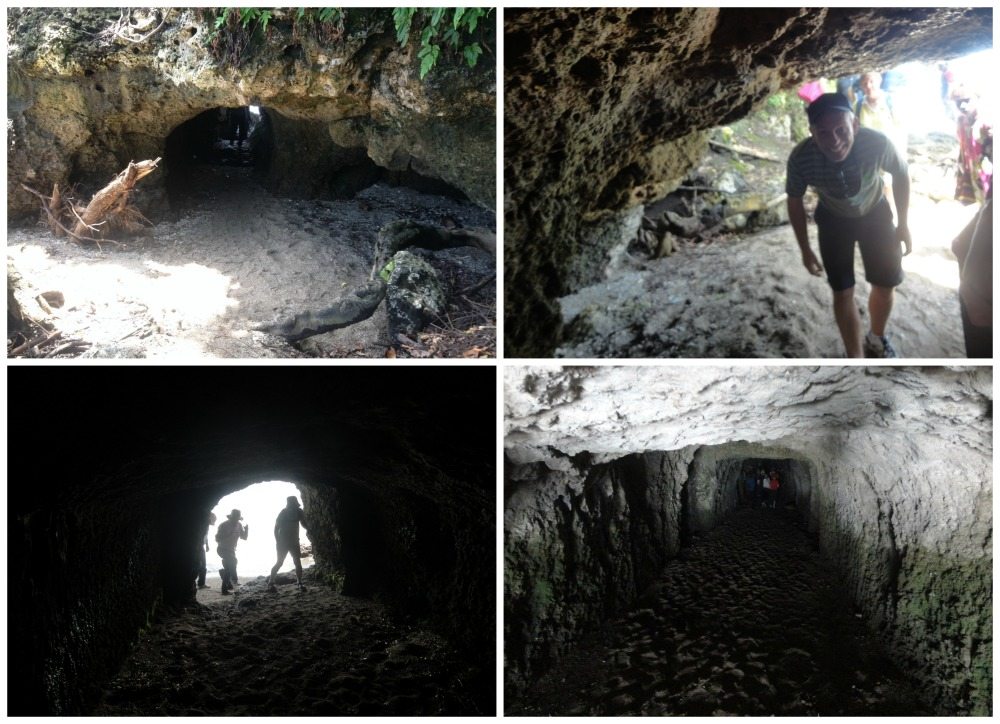 Next stop is the observatory that watches the volcano activity, which disappointingly was closed today being Sunday (apparently volcanoes don’t erupt on Sundays, didn’t you know? lol). However, the lookout to the port was awesome and our dear Queen Elizabeth was clear to see alongside the dock. No wonder all the locals were out in droves to see the sight. Apparently only an average of six ships a year stop here, so it is considered quite the event. 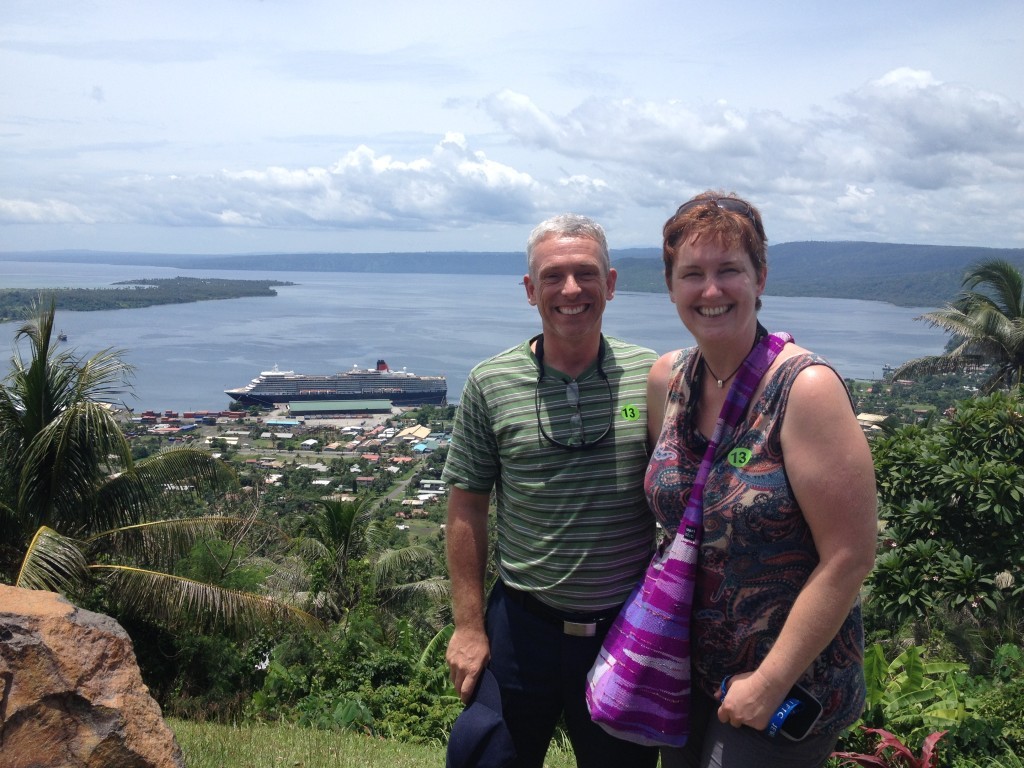 Views over the bay in Rabaul

We return to the ship only to quickly drop off our bags and then head back out to take a stroll through the street markets and into the town. Lots of trinkets etc. are for sale, and the markets are buzzing with activity and school-aged kids, having already been to Sunday church for the morning.

The supermarket is busy with both tourists and locals alike. It is clear to see that this is an area that thrives on tourism and that the locals rely very heavily on the money we spend on their hand-made souvenirs, food, and services. 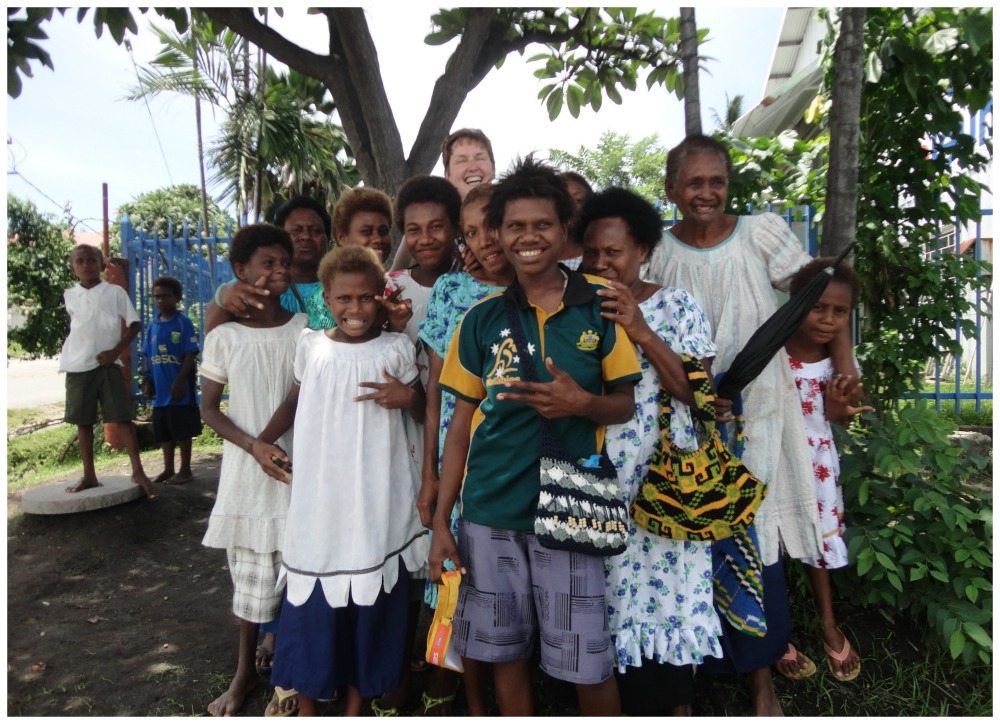 We grab a couple of ice creams and pay with Aussie dollars and get some coins for change, (Moni wanted the one with a hole in the centre to keep). 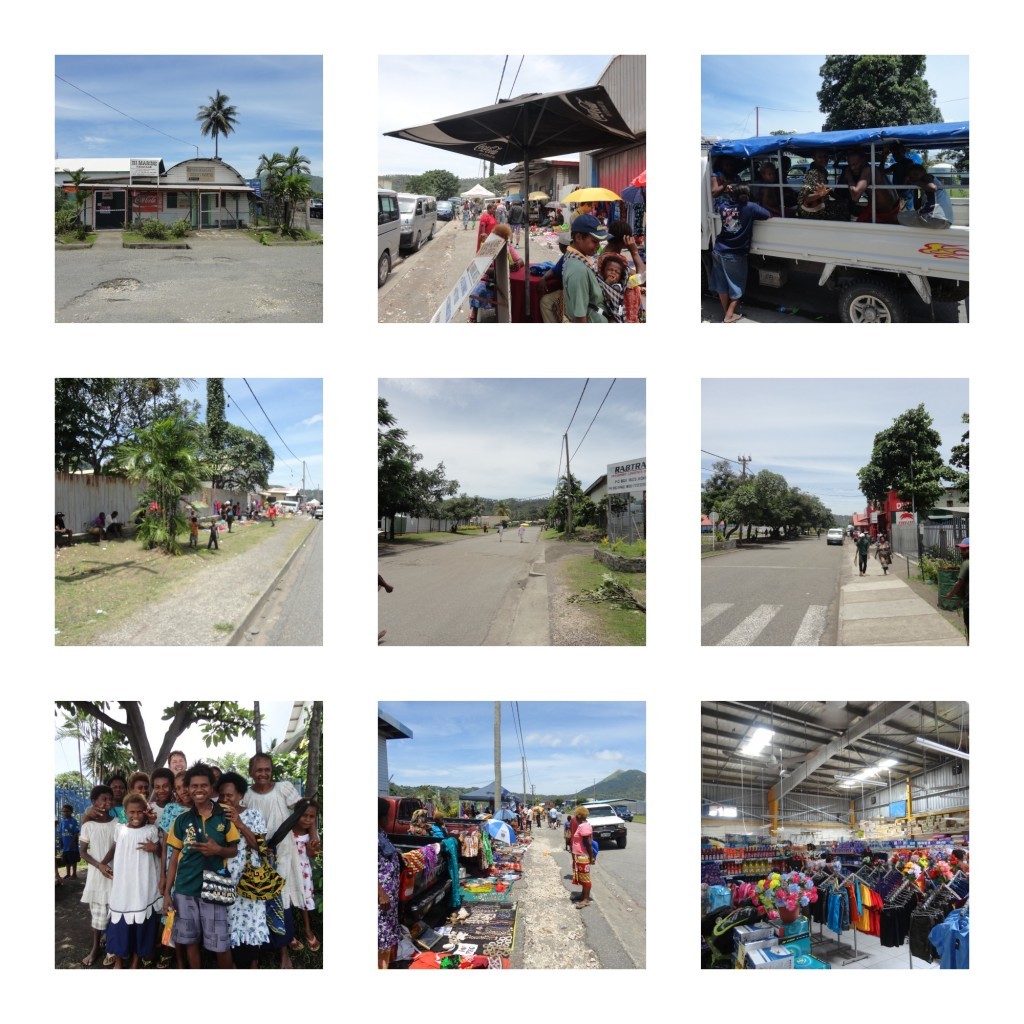 Back on board we get some lunch in the Lido buffet and sit with the view of the markets and town. The weather is truly holiday-perfect – hot, and no rain. 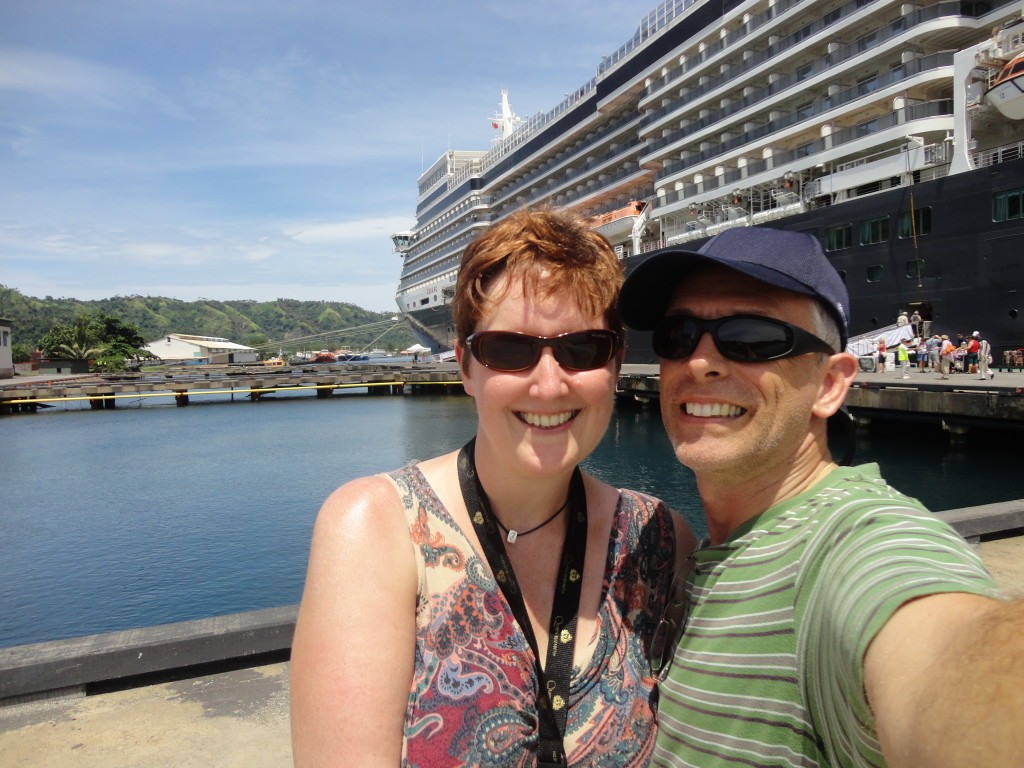 At 3.30pm Queen Elizabeth eases away from the dock to her way back out to sea. We are delighted by the sight of dozens of people, both onboard and on shore, smiling and waving goodbye to each other, the ship and the magical place.

We enjoy a cold pint of beer as we sail slowly out of the bay as the lush green hills and volcano slowly disappear from sight. We enjoy the last of the day’s sun rays up on the top deck. I practice a few strokes in the golf nets while Moni relaxes with her book. 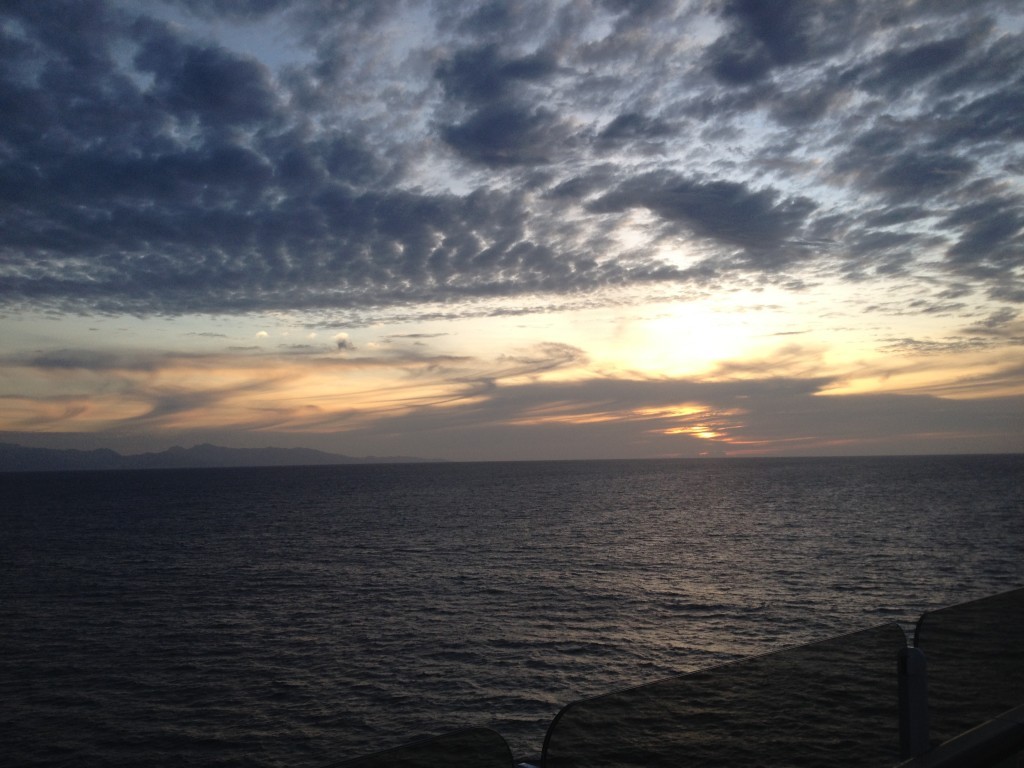 Back to the cabin after the sun sets to freshen up for the evening. Once we are almost ready I realise I am missing my reading glasses, so we head out to the reception area to look at their lost-and-found box of glasses. While there are more than a dozen pairs in the box (we cruise passengers are evidently an absent-minded bunch), unfortunately, none is mine. I go and re-trace my steps while Moni (probably rolling her eyes at me from behind her phone) logs onto the internet to check messages ie. chat with her Facebook support group of annoyed-wives-of-husbands-who-lose-glasses-and-other-things. 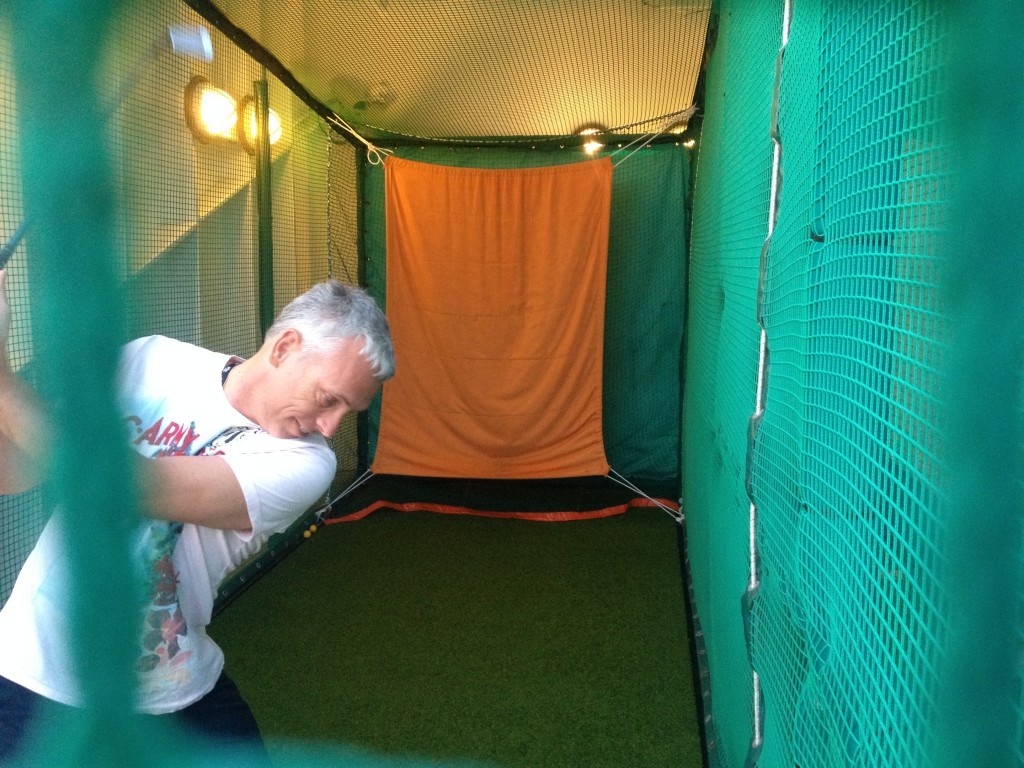 With my Sherlock Holmes hat fixed firmly in place and using my (imaginary) detective magnifying glass (because, you know…I lost my reading glasses…) I examine the photos I took earlier that day (hooray for selfies!) and notice I still had them on until after hitting the golf balls in the nets. Et Voila!!! The missing glasses are found in the golf swing nets which must have fallen off as I was practicing. I consider myself lucky to find them on such a large ship (or was it merely my sheer investigatory brilliance? Elementary, my dear Watson!).

Well, as annoying that little detour may have been at the time, it is responsible for the lovely and romantic location of our dinner tonight, which is at the back of The Lido outside on the deck. 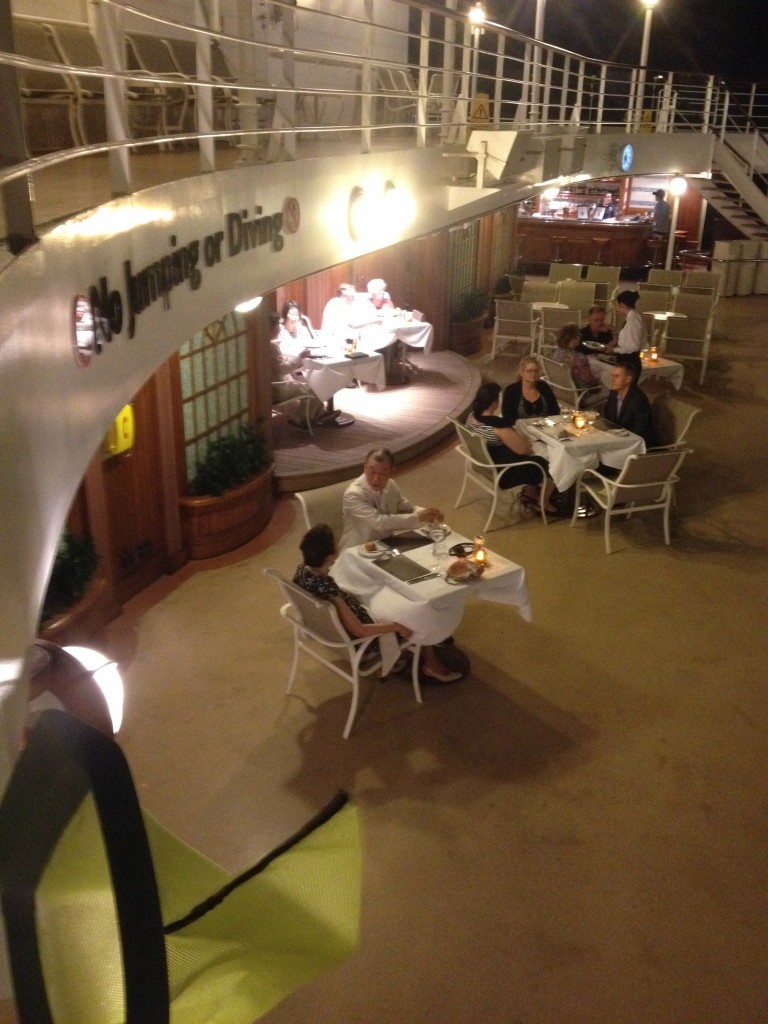 Outside dining at the rear of the Lido on QE

On the spur of the moment we choose to have dinner right here, and after a while, we are the only ones left enjoying the beautiful atmosphere. So the entire back of the ship was all ours alone, hard to believe with 1999 other passengers onboard. Who has two thumbs and says romance in marriage is dead after 11 years? NOT this guy!!! So take THAT, imaginary-Facebook-group-for-annoyed-wives..lol 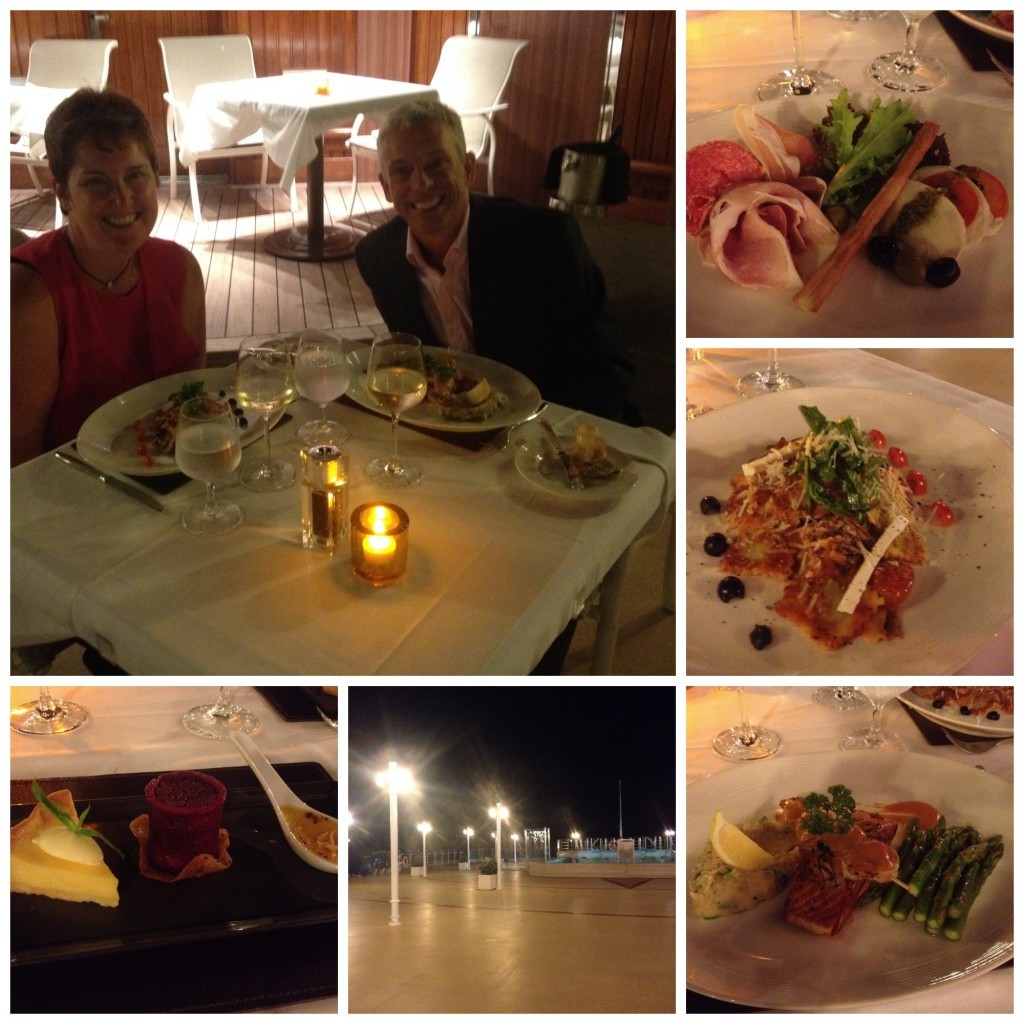 Romantic dinner on QE Lido outside

You Don’t Have To Be Rich To Cruise on Cunar...
Yorky’s Knob, so Close Yet Still so Far
What Does it Cost to Live on Bowen Island
Queen Elizabeth Maiden Visit To Kagoshima
QE Docks After Midnight At Osanbashi Pier In Yokoh...