MSC Magnifica cruise – Day at sea heading towards Brazil. I woke at 7.45am while Moni continued to enjoy her sleep.

We made our way to breakfast at 9.30am and as the restaurant finished serving at this time we visited the buffet. Oh boy, I think everyone onboard did the same thing. It was very busy and add to that that nobody really knew where to get what, it was rather chaotic. 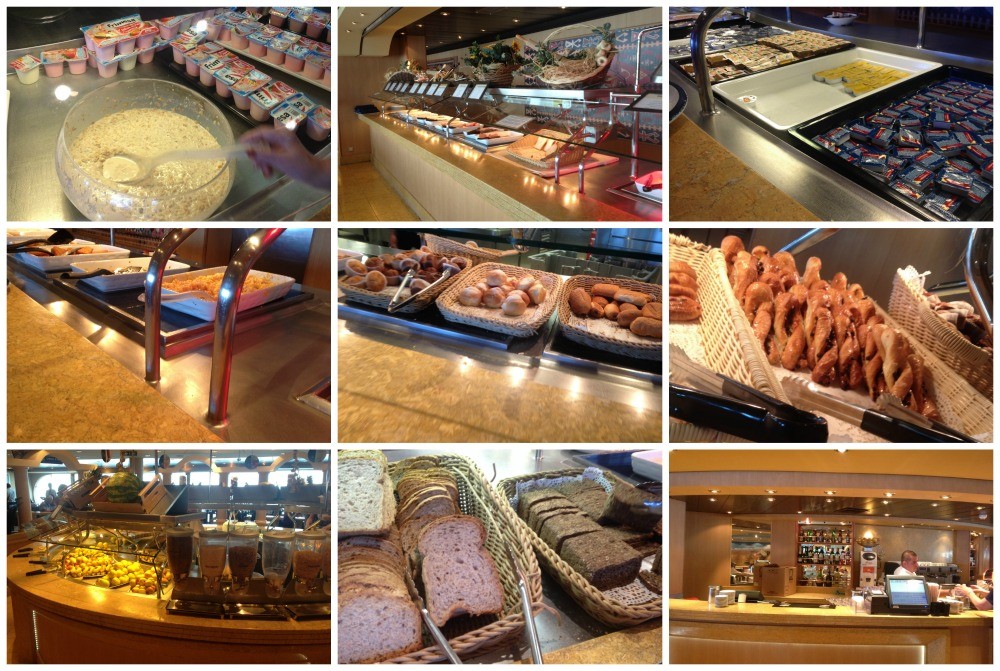 Finally finding a table to enjoy our breakfast at the very rear of the ship, which was by far the least busy area, plus you get to see out. 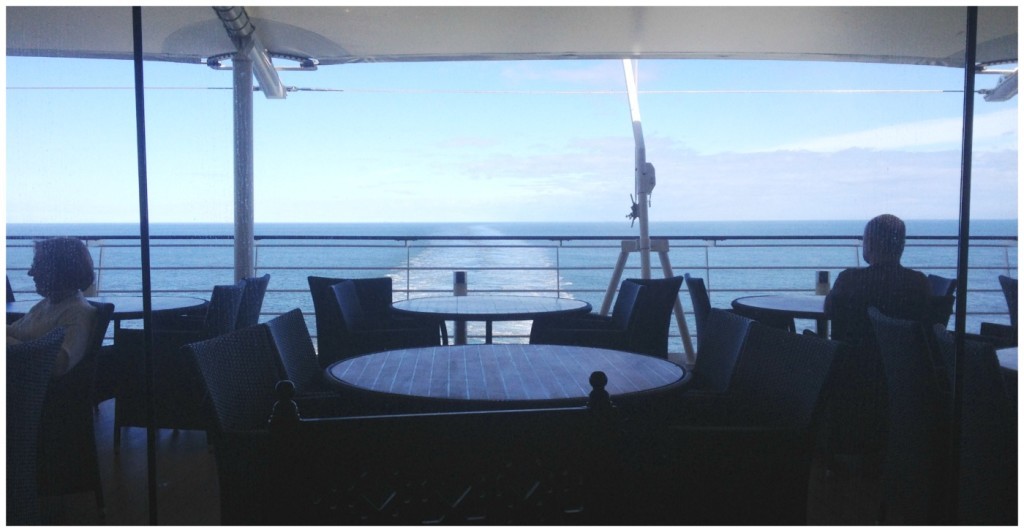 The view from the back of the MSC Magnifica buffet restaurant

This is one really great thing that we’ve noticed so far and that is the amount of floor to ceiling windows which are nearly all around the ship, it adds lots of light and allows uninterrupted views, really wonderful.

Actually right now only the second day not even 24 hours in and I love this ship, early days I know and we will see how this review continues…

We took a cup of tea each and headed out from the buffet area into the covered swimming pool area and sat there for a while.

A great spot, full of light, looking down to the pool and bar area.

This bar is where you can find the house made ice creams which they list in a funky ice cream cone-shaped menu. We will try some and report on it later in the review, but for now this is part of the menu…

Just around from here you can get out onto the deck and walk to the front on both sides, or you can play table football like we did for a few games, two tables but only one ball. We had some fun and must have made a bit of noise as we attracted a few onlookers. 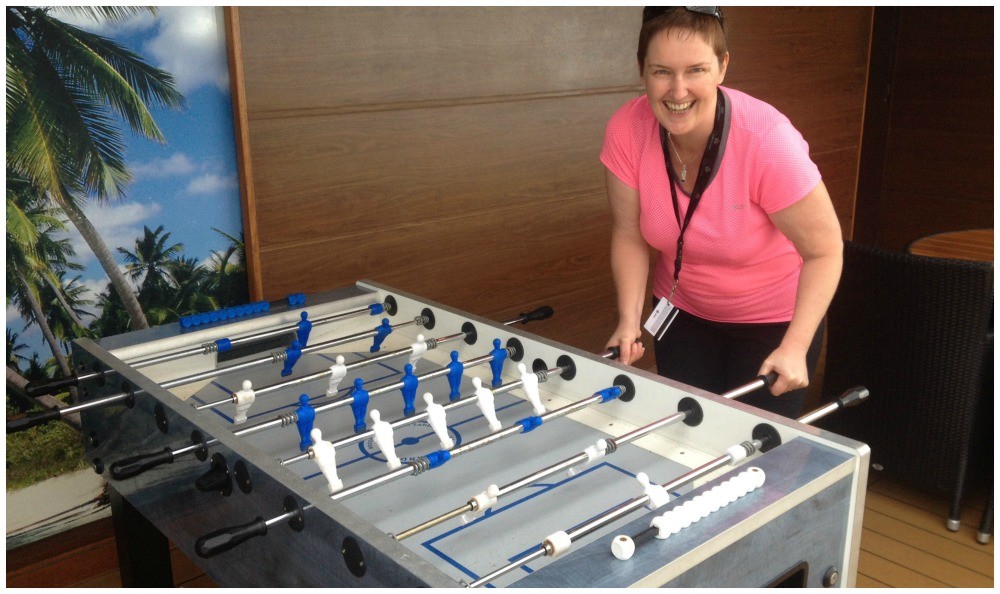 We decided to call it quits after the third game and allow a couple who were watching us during the last game to play and we moved on.

Help, where is the cafe?

Trying to find the coffee shop is a challenge, until you know, right. nearly all the bars have proper coffee machines, the only thing is many of them only open at evening time.

The real designated cafe is on deck 5 just off from the reception or guest services area.

As for the coffee… If you know us well, you’ll know that we do like a good coffee and have been known to walk 1.5 hours or 13km to get one, yes, that’s how much we appreciate a great cup of coffee. 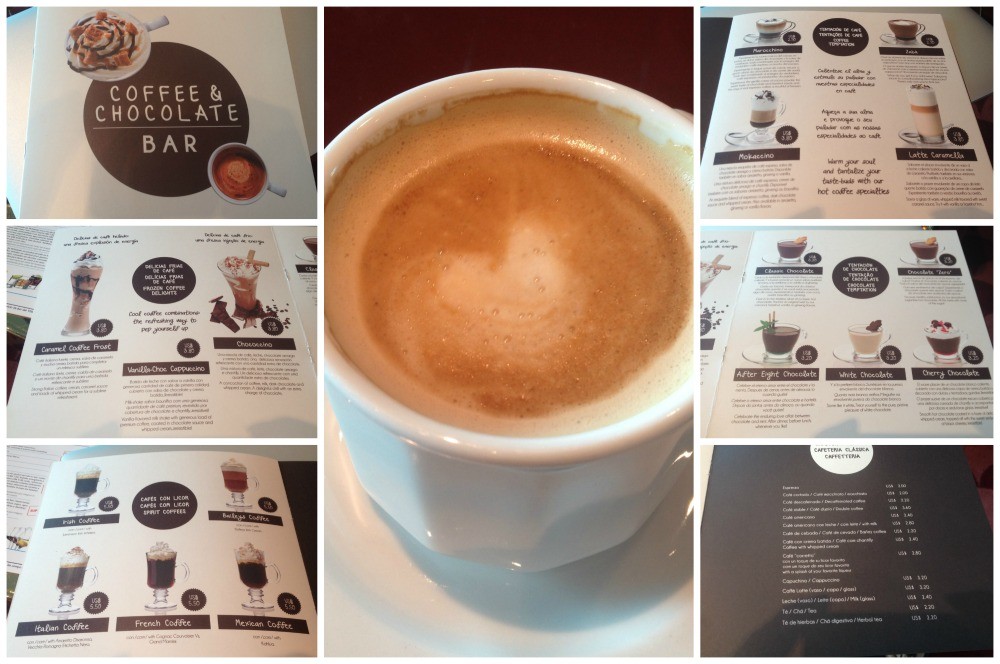 Well, sadly this doesn’t live up to the 13km walk for a coffee standard and doesn’t qualify for a 3km walk, but it is pretty good and has room for improvement, lets see how this goes over the next few days.

Lunch was next and at 1.20pm we made our way to the L’Edera Restaurant on deck 5. We waited to get seated by the waiter, and he explained that he liked to seat the people who speak the same language together if possible and so we ended up on a table with two other couple who spoke English, both Australian couples in fact.

We hit it off and had a great lunch being the last to leave at 3.30pm.

Lunch drinks for me was a couple of beers and Moni had a couple of glasses of white wine. Service was a little slow for, I guess due to the sheer numbers of people all at the same time. What we had for lunch… 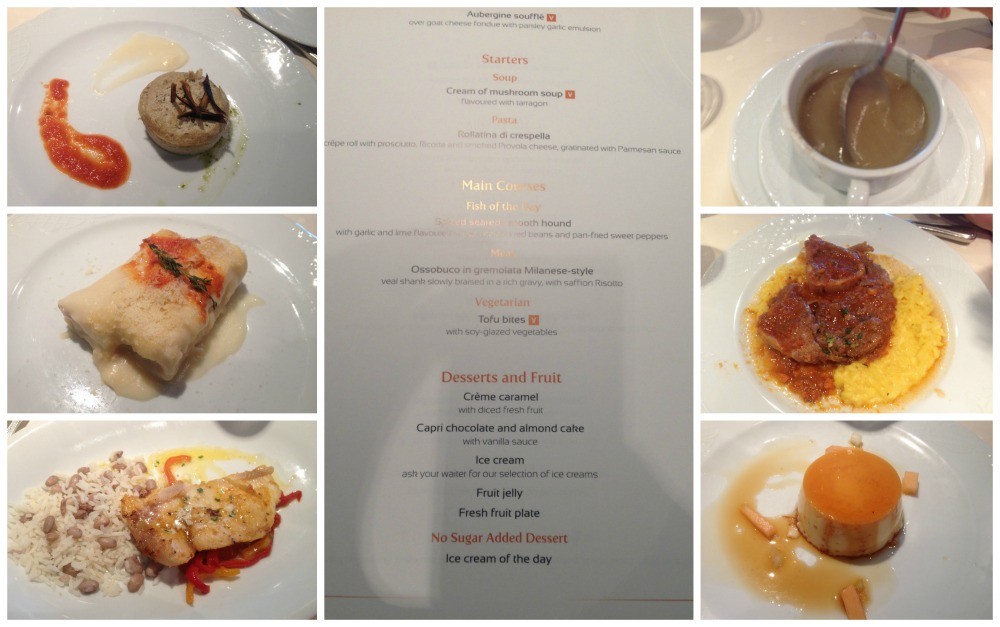 Lunch in L’Edera on MSC Magnifica 2015

After lunch we stopped by the Library and got out a couple of books. Boy does this take some time having to have the books checked out, like being at school, note that all books must be returned before disembarking or a fee will be charged!!

The Library on MSC Magnifica

We hadn’t seen any art onboard as yet, but clearly it used to be hung as the walls were lit and waiting for some masterpieces, we gladly helped fill the spots, if only for a few seconds…

Moni took part in a craft class with around 40 laddies in the Toapzio bar. I explored the ship and stepped into a lift only to see a guy running on the spot holding an imitation Olympic torch, he was a crew member and later that day he appeared as he ran or should I say crawled onto the stage all part of the Gold medals show.

Craft class on MSC Magnifica, crazy man in the lift…

Back in the cabin I met Moni with a wonderful box she had made. Apparently it is so simple to make and demonstrated it to me and yes it is, very clever.

Dinner in the Quattro Venti restaurant

Our table and again no one joined us. The tables around us were all empty again, looks like this might be a lonely section… Anyway dinner service was excellent and the food was fine. 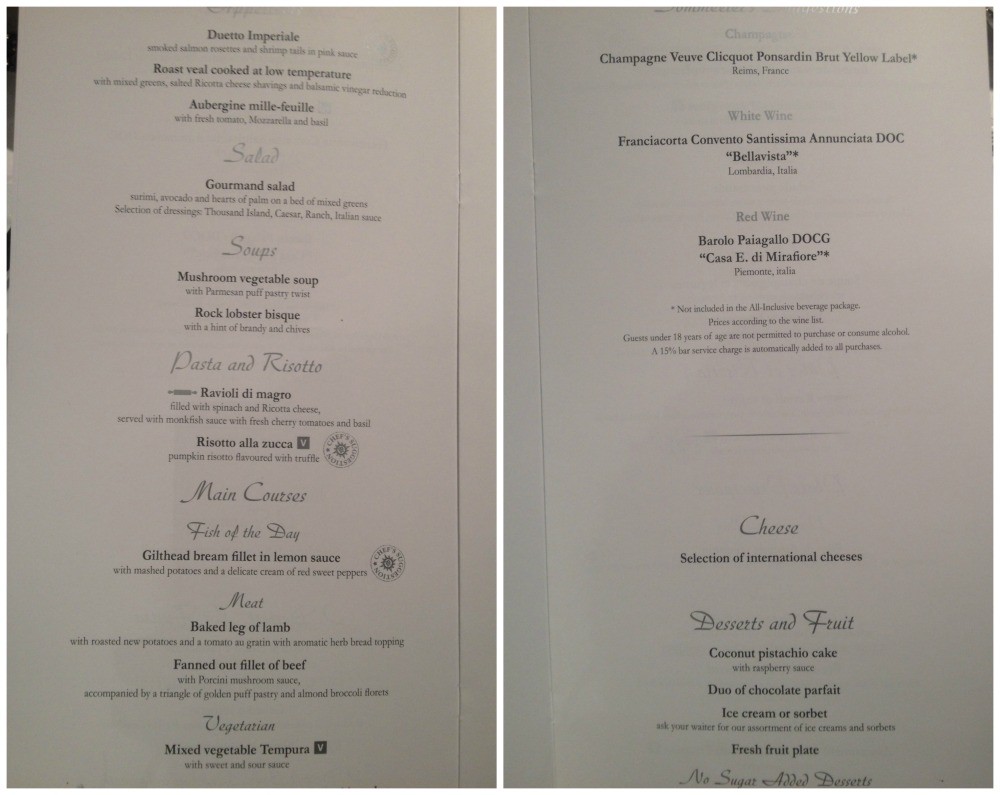 Fanned out fillet of beef – with Porcini mushroom sauce, accompanied by a triangle of golden puff pastry and almond broccoli florets. (J) 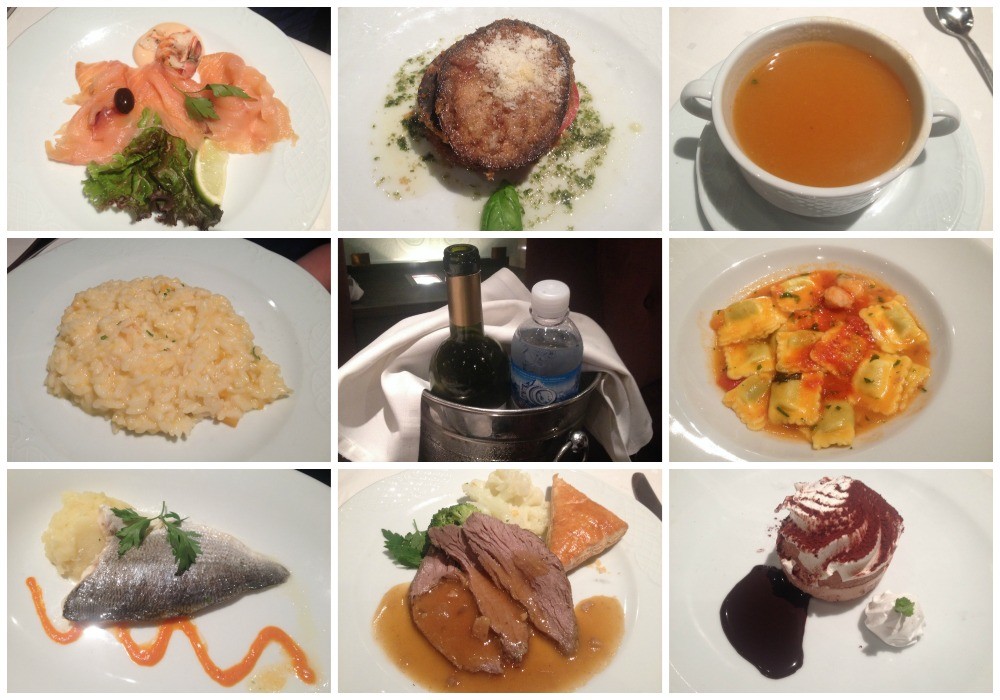 Formal night and drinks with the Captain

After dinner we headed towards the theatre to see the first of the shows. It was also the officers and gentlemen evening and a chance to meet the Captain. I dragged Moni along to meet the Captain, have a photo and move on. He was in the Tiger bar area, and there was meant to be champagne, which we did see plenty of as we walked to dinner at 7.30, but at this time it was quite busy and no sign of staff with drinks. 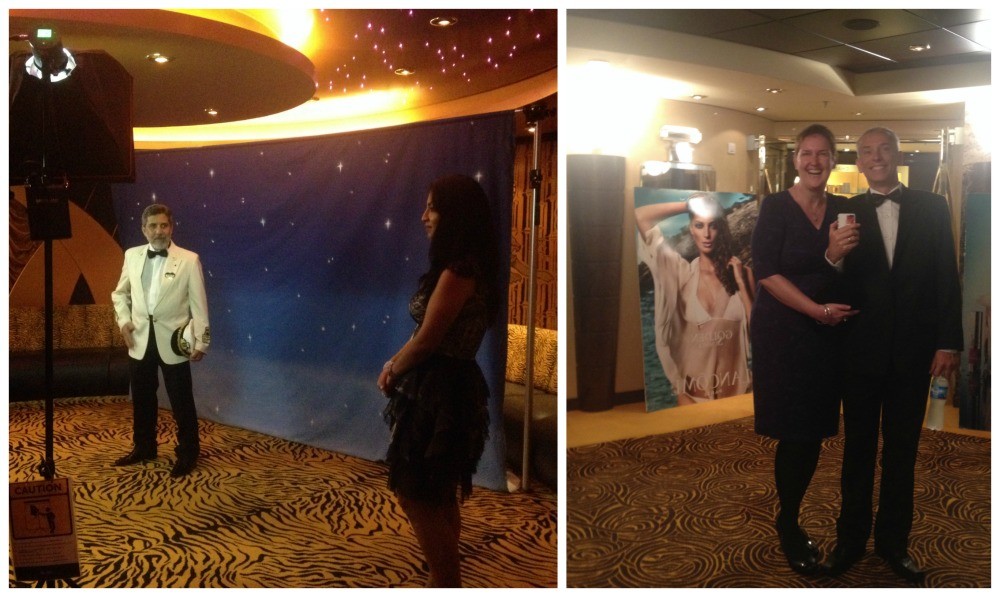 Formal Night with the Captain of MSC Magnifica

The whole thing didn’t seem to organised, which is a shame. That’s often a problem when having an event in such an open area. Anyway with that over with we made it to the theatre.

No drink service in the Royal Theatre

There is no drinks service inside the theatre, and now I know why. The seats are very close to the row in front and each time someone wants to get by you have to stand up and either exit the row or let them squeeze past. With the outside end of the row seats being prime real-estate for ease of escape at the end of the show.

Obviously no staff can bring you a drink and plus there are no small table tops to sit them on either, so that explains why there is no drinks service in the theatre.

After the cruise director introduced the senior officers and the Captain had said a few words, the show began.

It was called Gold Medals, and I said to Moni that surely this would be the best show of the cruise, such a shame that it didn’t excite us at all. Good night all & I’ll leave you with the sunset from earlier.