As promised here is the post about taking the bus from Mendoza to Buenos Aires overnight with suite class chairs with CATA International. Having experienced the day trip from Santiago to Mendoza with Andesmar last week in the Semi Cama class I made sure to book a sleeper seat at the front of the bus going overnight.

The bus station in Mendoza is large and has over 40 bus bays, lucky for us it was not busy when we waited for our bus to arrive.

There are offices to many bus companies throughout the station where you can book or check times etc. Our bus was due to leave at 5.30pm from between bay 26 and 30. We made our way there and waited.

We were early and grabbed a coffee and sandwich while we waited, good job we did, but more on that later.

Busses came and went from various bays and the departure board never listed our bus, very strange. I had noticed a couple of CATA Royal Suite busses pull in and disembark passengers and then drive off. I knew that our bus was a Royal Suite bus as these are fully suite seat busses, no semi cama or less.

At 5.20pm our bus pulled into the bay. All the passengers waited and handed the luggage to the packers and made their way to board the bus. I handed over my three bags for the hold and gave the guy a tip, 50 Peso. He said it was not enough!! WTF… he said it’s 50 peso per bag. I saw one guy gave 20 only and received strange looks. I had no more on me at the time and Moni was waiting next to the driver. 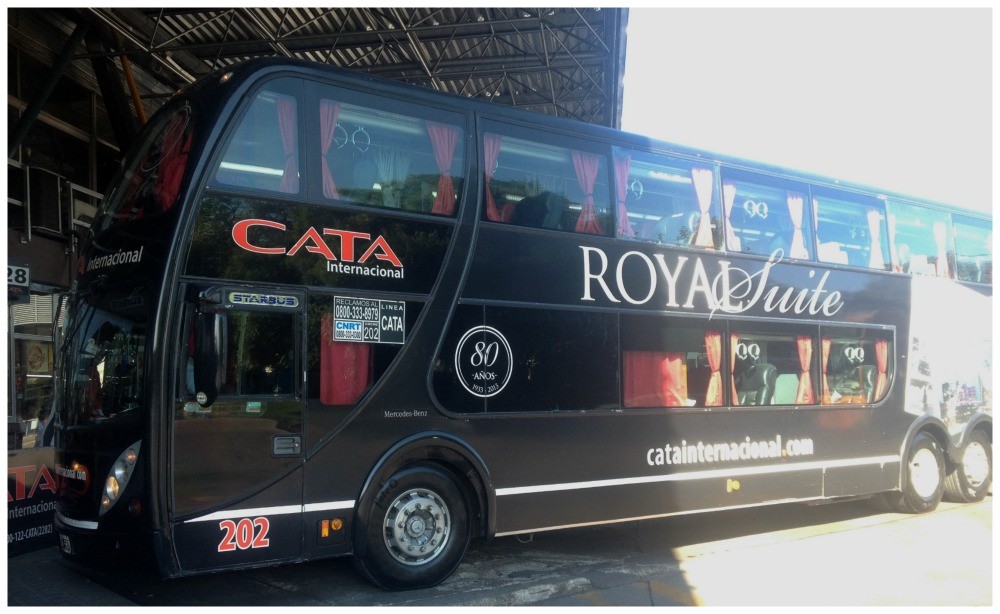 Anyway, all the bags went on. I think that is just a ploy by these guys to get more tips, and considering that you pay a good amount for the bus trip it’s a joke really.

Rant over… We showed the driver our ticket and on we got.

You step in through the side door into the hostess area opposite the toilet, to the left are the four downstairs seats and the right are the steps up to the top-level.

If you have read about our bus trip from Santiago to Mendoza, you’ll know that we had upper level front seats for that journey, and it was a requirement for this trip as well. Through my research I was able to find this bus with suite class seats and at the front, perfect. 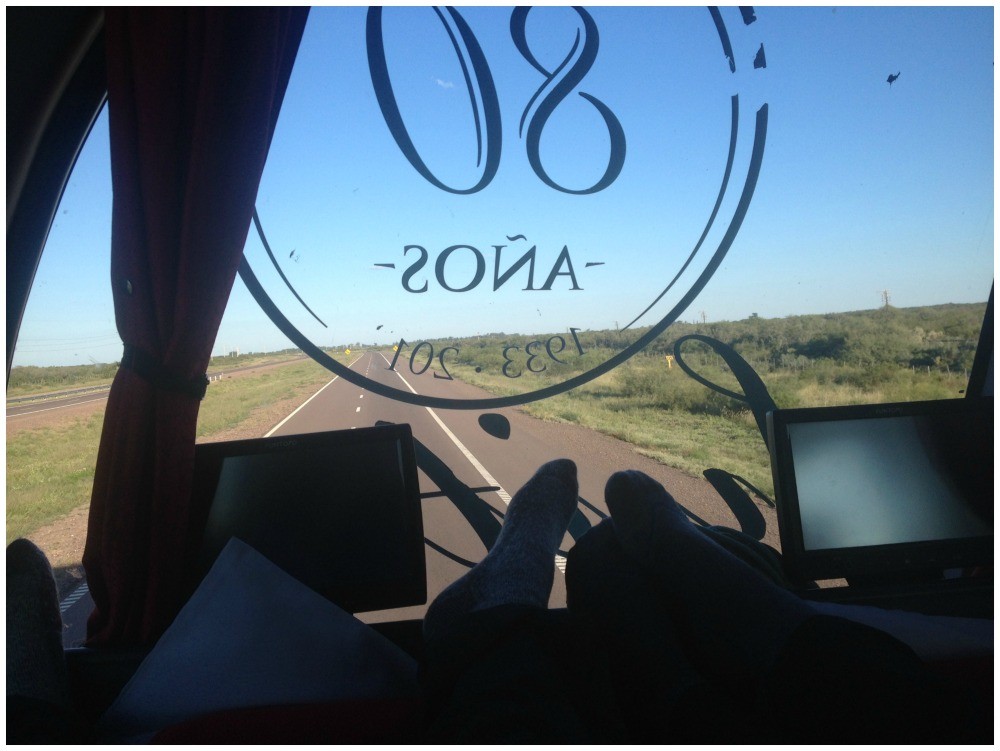 Not all suite class seats are at the front, actually many of them are just part of a normal bus and you will find the suite class downstairs.

The set up of the Royal Suite bus is two seats on the left one on the right. All seats are suites and recline to 180 degrees (more on this later). 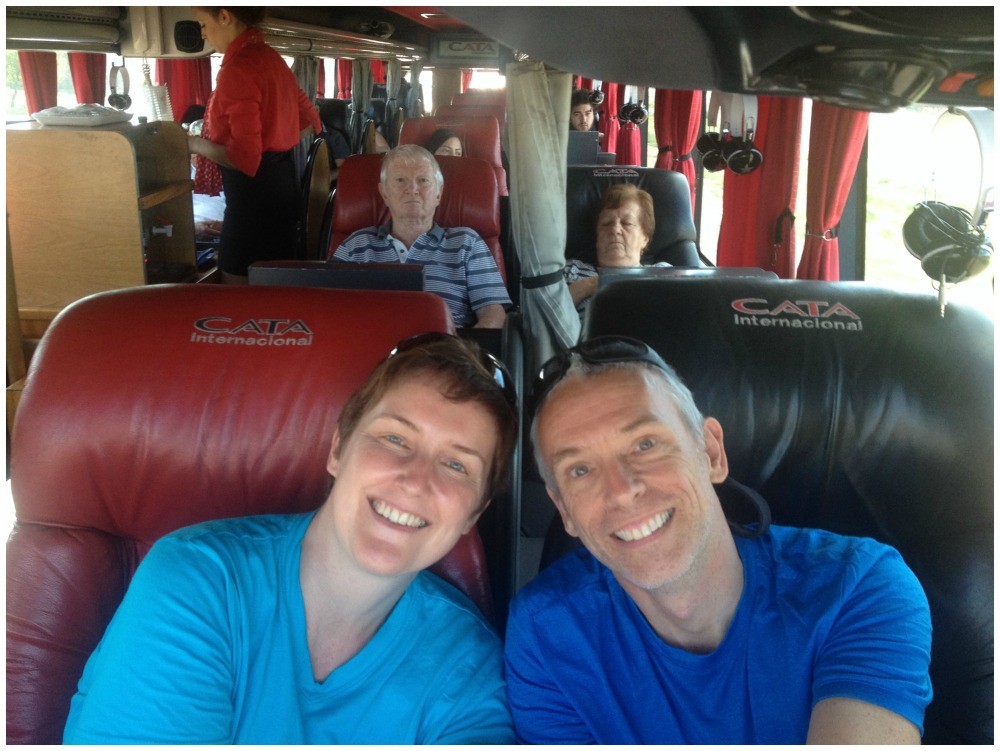 Selfie from the very front of the bus

We got settled in our seats and at 5.35 we departed Mendoza station. About 30 minutes later we received a snack which consisted of a triangle sandwich and a choice of seven up or Pepsi, served by a young hostess. This was all we saw of her for a long while… 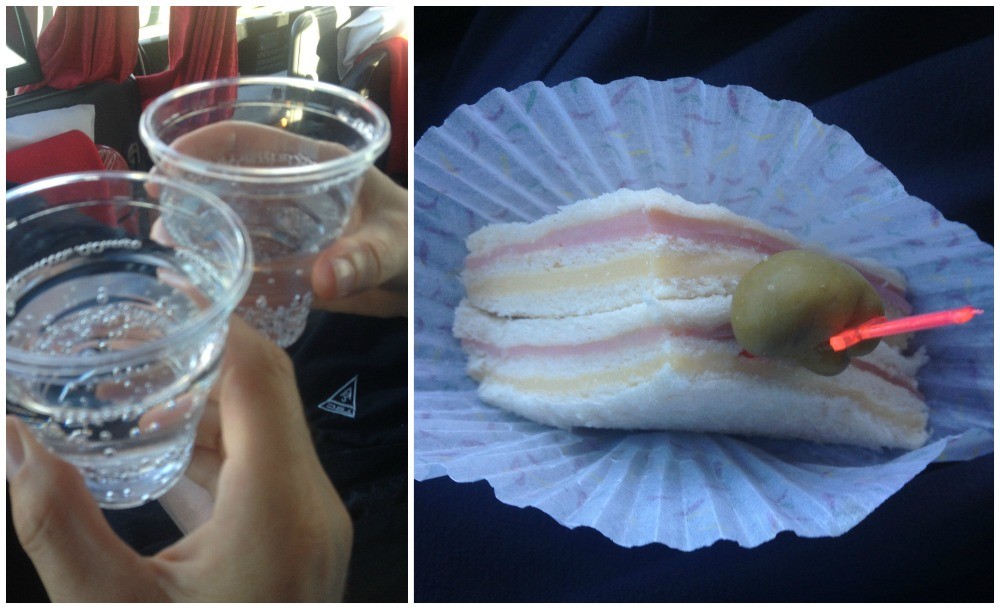 Leaving at this time of day you get to see the outskirts of Mendoza and then some of the scenery before the sun goes down behind us.

Images from the bus journey Mendoza to Buenos Aires

Moni and I look at each other and wonder when we will be served dinner. It was 8.30pm and we were thankful that we had eaten the sandwich at the station, I took out some crackers and we munched on a few of them.

What does your suite class ticket get you?

Apart from the food and beverage service that you will continue to read about in this post, this is what you will find in and around your seat.

Each of the seats has its own mini TV which is fixed to a panel in front of you. You can watch a choice of movies (Moni didn’t find one in English) not that I wanted to watch. You can access the internet on the screen, also listen to music and some other things. You also have a blanket and small pillow, and a newspaper. A pair of headphones hang from above the seat. Seat belts are required by law to be worn, and also they say that you must keep your shoes on at all times!!

The headphones were not very good, Moni tried four pairs and they all had some fault, no sound, sound only in the left etc. The most ridiculous part was the cord length, it was so short that you had to lean forward in your seat, if you sat back, the headphones would be pulled to your nose!! and it was not just a fluke, it was with all four pairs.

The journey was plagued with road works and detours and some bumpy parts, that’s for sure. At 8.45pm we pulled in to San Luis bus station where a few people got off & on.

We continued on and around 9.30pm we saw the hostess again and dinner service began.

I’d read a few reviews from different bloggers regarding dinner, wine and champagne service and was not sure what to believe we’d get.

First our table trays were handed to us which you just push into place with the holes in the chair arms. 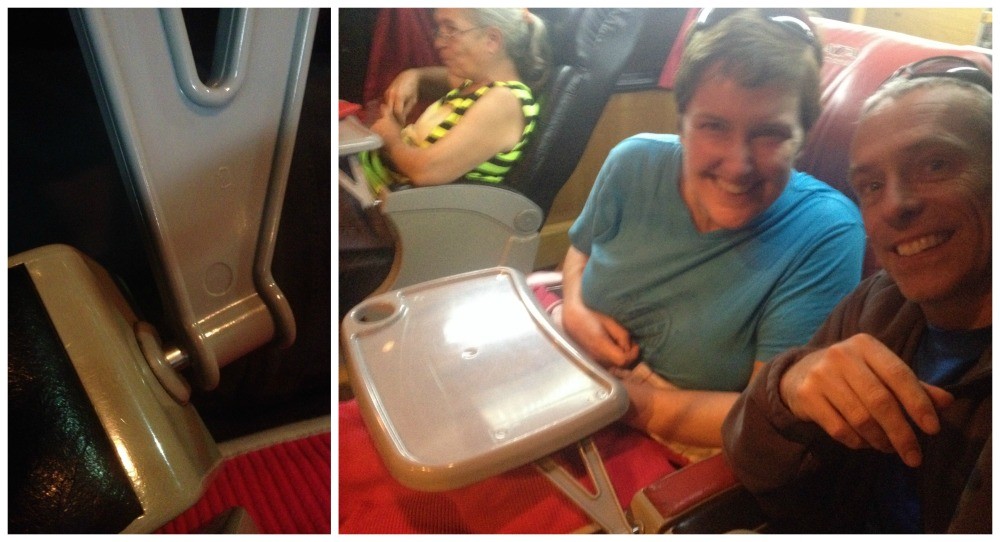 Tray tables for dining on the bus

Then a tray of cold food is delivered, with a choice of more soft drink or red or white wine. With a cold food tray we chose white wine and began our meals. Others have likened it to airplane meals and we’d have to agree. 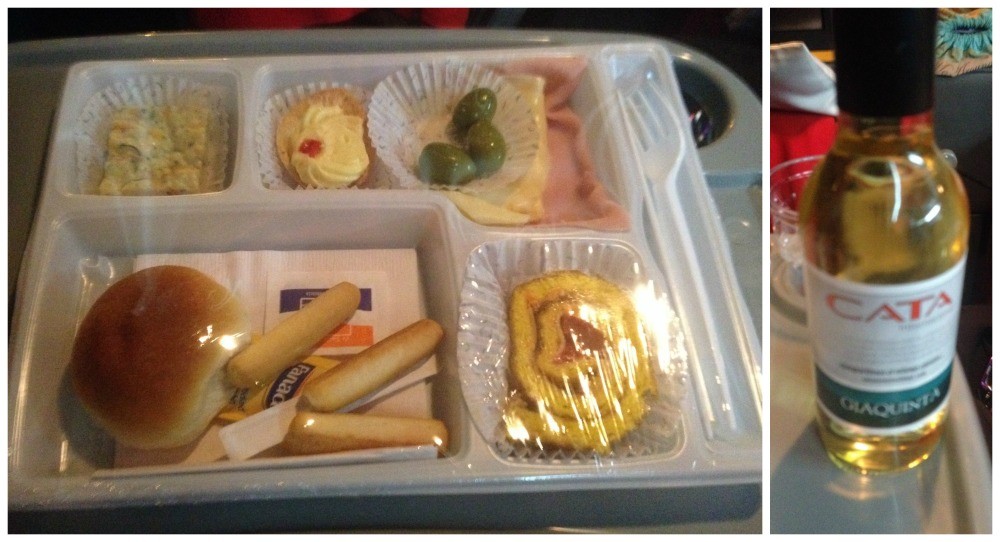 After we had finished these meals and our trays were cleared away, we were offered a dessert of fresh fruit salad. Shortly after the hostess removed our tray tables and cleaned them and stowed them behind our seats. 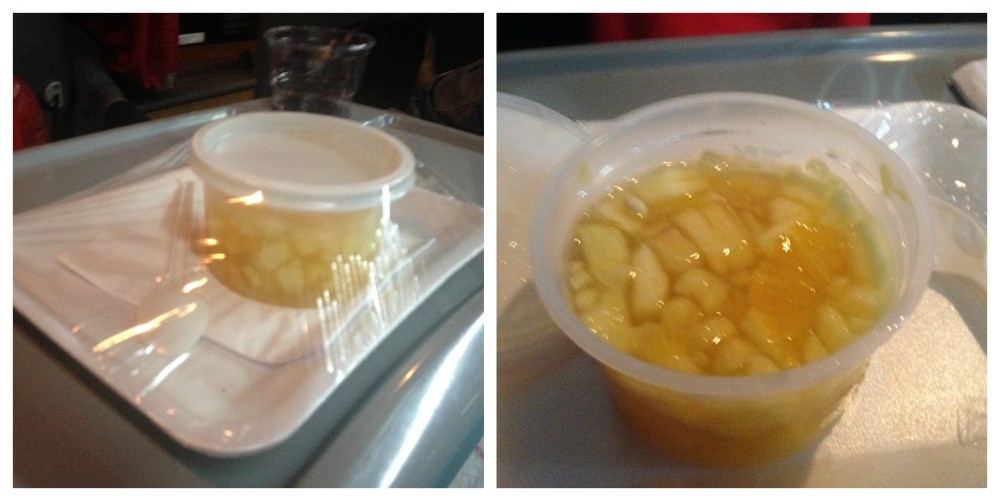 Dessert on the bus

A few minutes later she returned and enquired if we would like tea or coffee and something else, we chose a tea and a coffee. I wasn’t sure what else she had said but my Sherlock Holmes detective eyes spied a bottle of champagne and a whisky on the bench. She popped the cork and poured a glass for a guest further back.

We finished our hot beverages and then asked for a whisky to which she gladly poured into plastic cups. This warmed the heart, not that it was cold (yet) on the bus. After enjoying one you need another right, and so Moni went to visit the loo and asked the hostess for another round, this time she received a slight look of non approval before a smile and a why not. The two plastic tumblers were handed to Moni as she exited the loo. 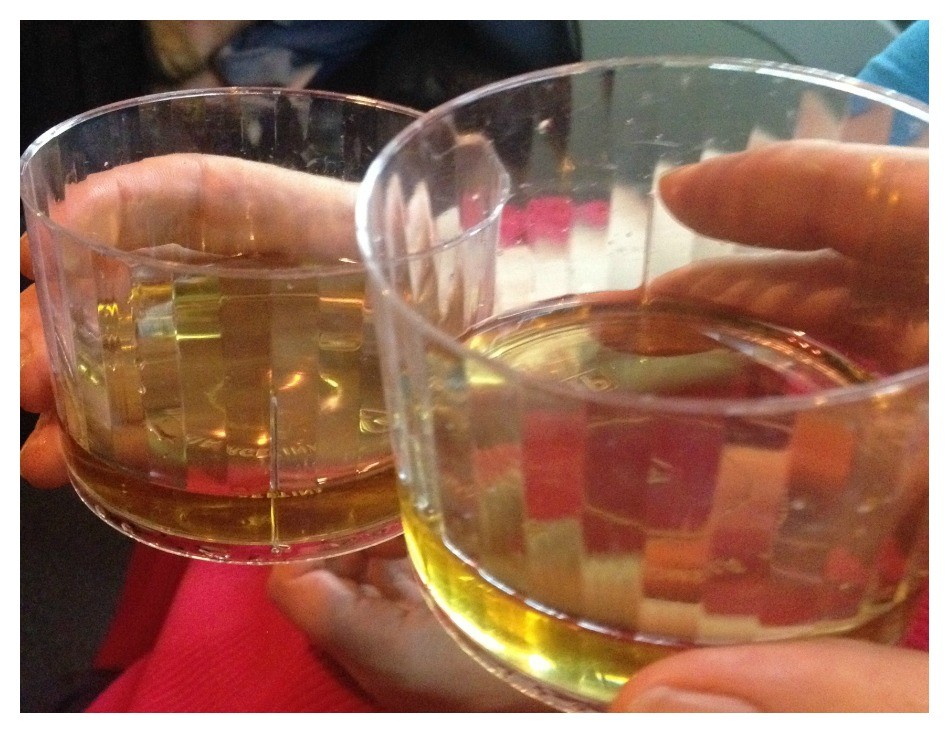 Around 10.15pm we arrived at Mercedes and picked up and let off some passengers.

After the second whisky we were ready for a sleep

I put on my jacket as I was feeling a little cool by the window. We reclined the seats as far as they would go, not quite 180 which is flat. Even though they do recline a long way back, 170 degrees would be more correct. The seats are leather and very comfortable, you also get a small pillow and a blanket.

As soon as we laid down we slept, the lights were all turned out and everyone was quiet, I assume sleeping. I slept through till 3.30am so about 5 hours, Moni had an hour more which is great as she finds it hard to sleep in seats.

Breakfast on the bus CATA International

The roads were poorly lit and some even lacked line markings. It was full moon and so not pitch black. The windows of the bus were now full of condensation and it was colder still. I dosed on and off until 6.00am when it started to get light. Shortly after breakfast was served. 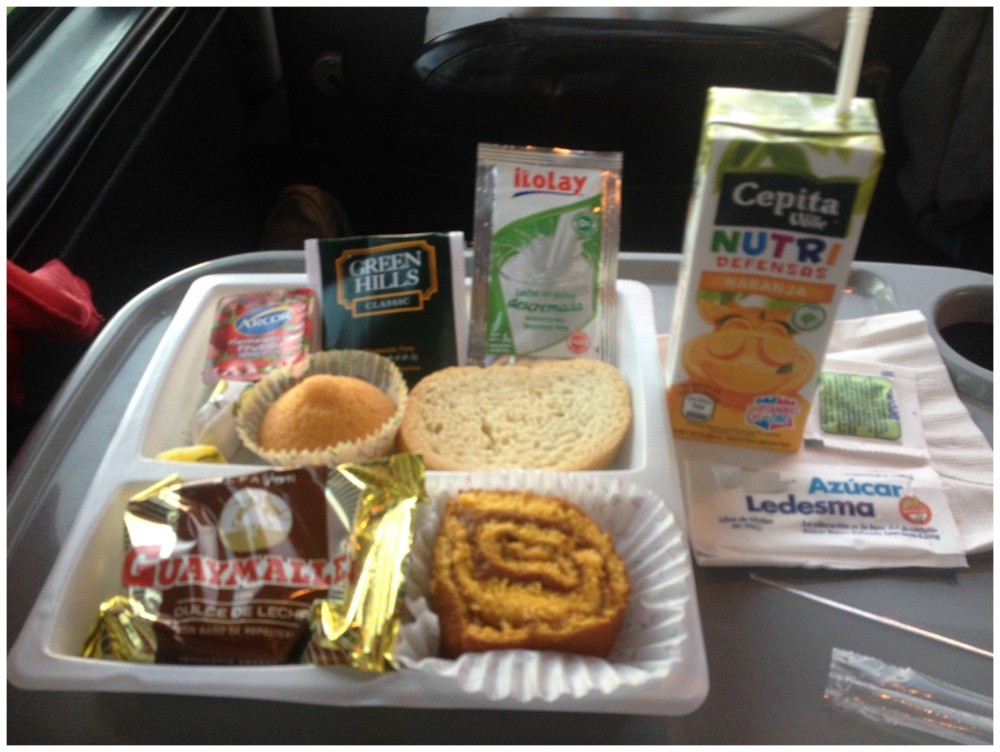 Breakfast on the bus CATA International

The lights came on and the hostess proceeded to offer breakfast trays, again the meal was pretty average. Breakfast was all a bit of a rush, as we were already nearing Retiro bus station, considering that we were due to arrive at 8.05am and we were nearly an hour early.

The recliner at 180 degrees on the CATA bus

Oh, I almost forgot to take a photo of the recliner seat in the so-called 180 degree position. I know it’s not the best shot, but you can clearly see that it’s NOT flat. Saying that, it was comfortable and we did sleep well for the five or six hours that we had. 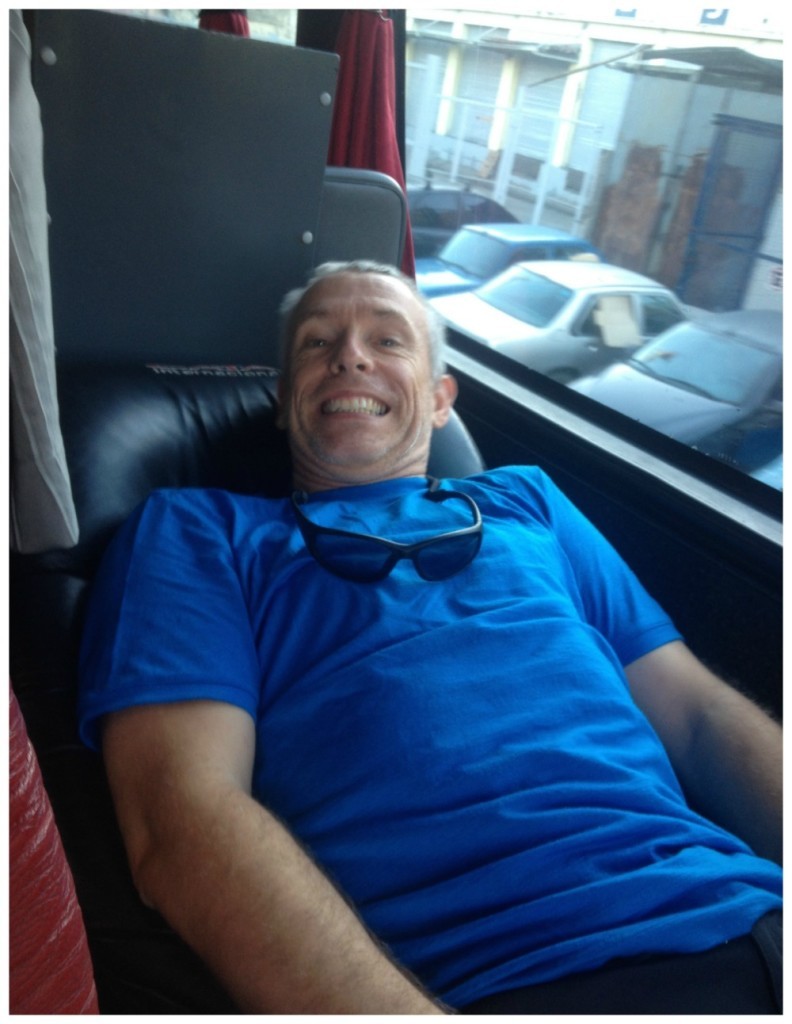 The recliner at 180 degrees on the CATA bus

The toilet on a CATA International bus

I did have to visit the toilet on this trip, probably the wine, tea and whisky that had something to do with it. The toilet was reasonably clean and fresh smelling, similar to an airplane toilet.

The toilet on a CATA International bus

By the way, arriving at Retiro bus station in Buenos Aires is an eye opener. To say that the area is very dirty would be kind. Actually the Retiro area is one of the most dangerous parts of Buenos Aires. 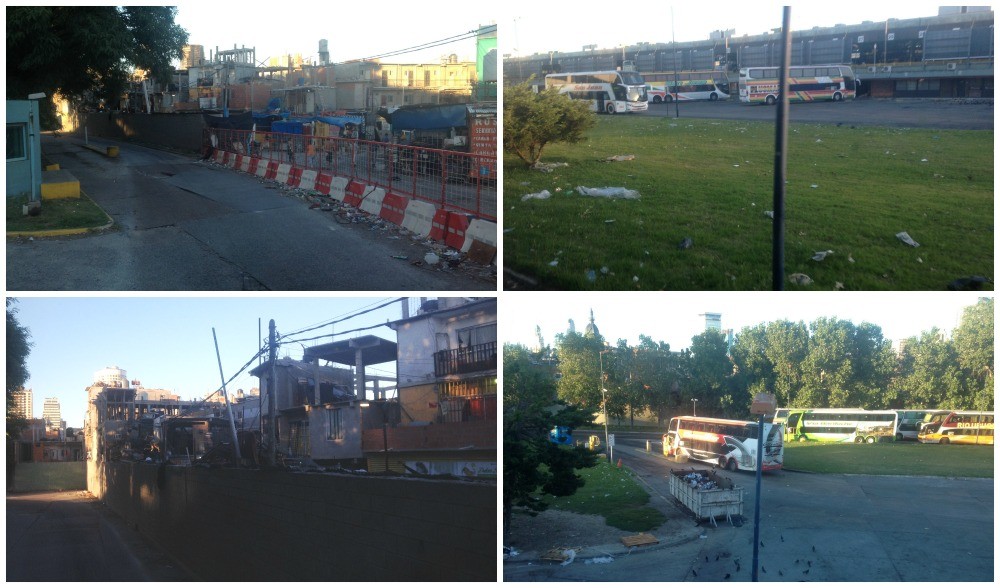 Buenos Aires bus station in Retiro area is huge, I could see 70 bus bays as we arrived. It didn’t look as busy as the bus station in Santiago, maybe it was just a bit too early. 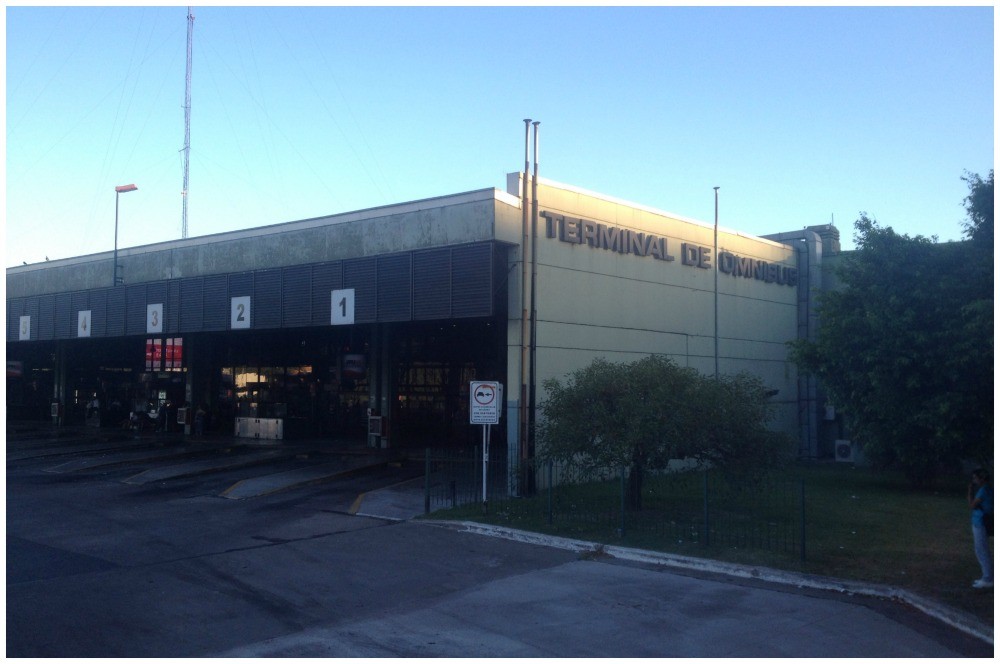 To wrap up this post about taking the overnight bus from Mendoza to Buenos Aires sitting in suite class chairs with CATA International, I’d like to add that the journey was very comfortable and hassle free. The meals were certainly not worthy of any accolades but were very welcome. The beverage service was a fine, even though you had to ask for more, and I think the champagne should have been offered with the triangle sandwich snacks, maybe the hostess forgot.

Would we chose CATA International again?

I think we would, especially if I couldn’t find another service with suite class seats at the upper front of the bus. This is our second bus journey in South America, as we have only traveled with Andesmar on our journey from Santiago to Mendoza, worth a read if you’re planning that trip.

At the end of the day folks, what you need to remember is, that it is a bus, traveling along some very dodgy roads at 80 mph, it’s not going to be the Ritz. If you keep that in mind you will enjoy the experience of traveling by bus from Mendoza to Buenos Aires in the suite class of CATA International.

16 Responses to “Mendoza To Buenos Aires By CATA International Bus”