“Full transit of the Panama Canal in the 100 year anniversary”

Today we were very excited, it was a huge ‘bucket list item’ for us… Up early at 5.45am so that we didn’t miss a thing. We didn’t get to the first lock until 7.15am, but the pilot boarded around 6am which I saw, and then we had some room service breakfast.

Today we were very excited, it was a huge ‘bucket list item’ for us… Up early at 5.45am so that we didn’t miss a thing. We didn’t get to the first lock until 7.15am, but the pilot boarded around 6am which I saw, and then we had some room service breakfast.

Harbour pilots and tugs watch the ship at the Panama Canal

The Captain and crew had mentioned that they would open up the front helipad area for viewing when we arrive in the canal and the webcam for the front of the ship confirmed this.

Viewing the Panama Canal from the tv or on deck

When we had finished breakfast Moni made her way to the helipad at the front of the ship and I joined soon after.

It was busy but not as much as I expected. The in cabin tv showed us where we were and you can follow the whole cruise from the forward web cam. Talking about webcams, you can actually see live action from the Panama Canal via three web cams at each of the locks. 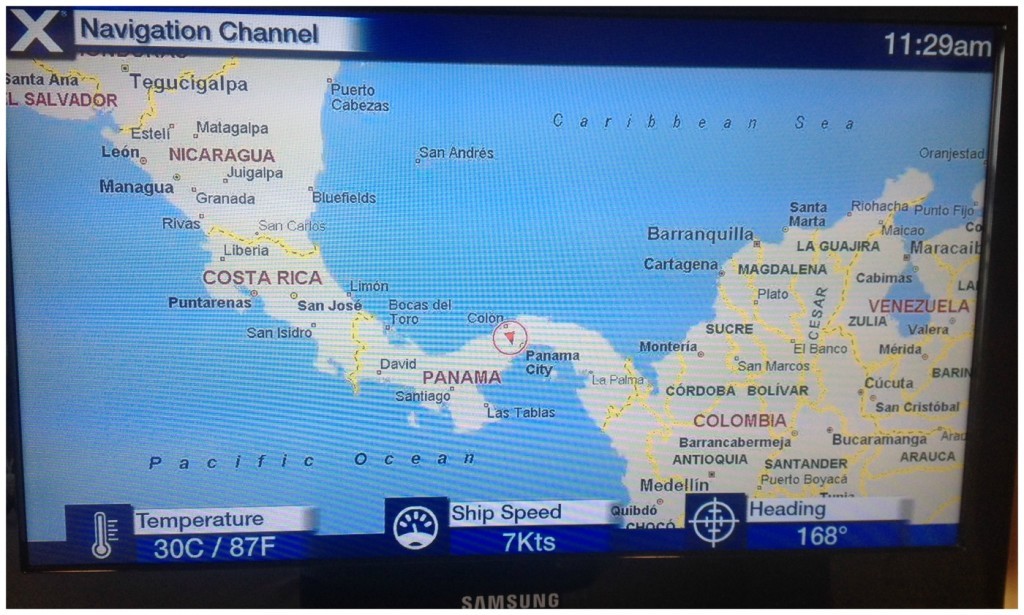 Moni had secured a front row viewing place when I joined her. 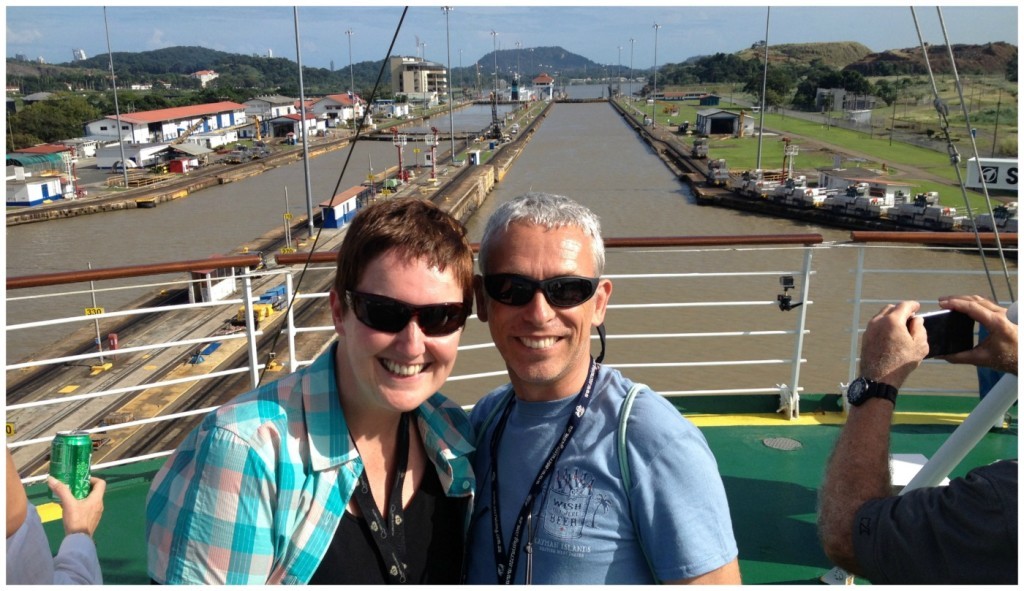 “Gatun Lock at the Panama Canal”

The first locks called the Gatun Locks were coming up and we watched as we made our way in and up in a set of three locks. These locks raise the vessels up 85 feet 26 metres to the Gatun Lake and later back down. 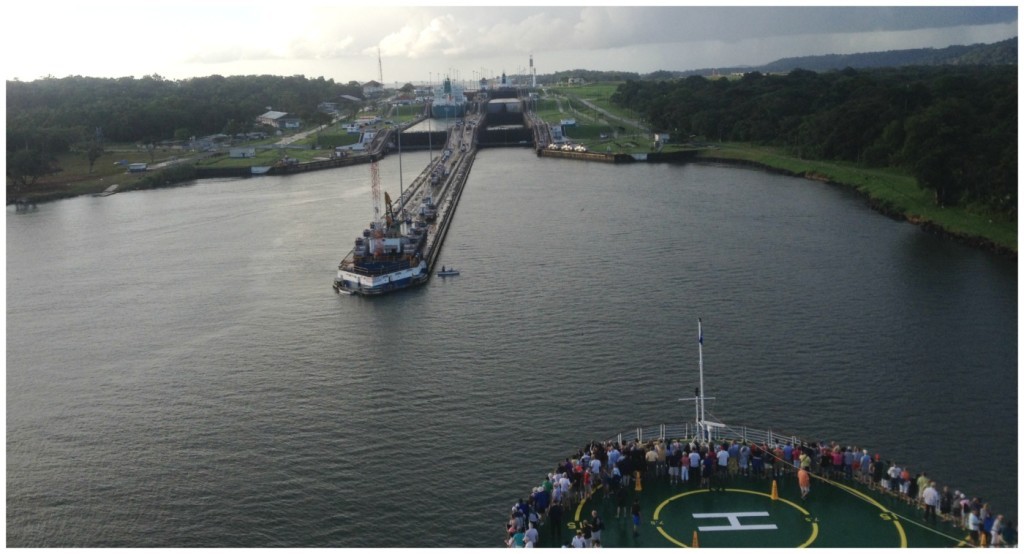 Entering the first lock on the Panama Canal

Raising up in the locks in the Gatun locks, Panama Canal

Another view of the locks opening.

The lock gates opening in the Panama Canal

The Celebrity ship making her way through the locks.

Gatun locks at the Panama Canal

A clip from the famous Panama Canal

“100 years anniversary of the Panama Canal”

The Panama Canal is 100 years old this year and what an amazing feat of engineering it was to construct. First the French and then the Americans managed to finally get it built.

With over 5000 people dying during the build over many years. Today they are still working on a new canal which will add a third lane which will allow for the much wider bigger ships to traverse the canal.

The whole journey from the Atlantic Ocean to the Pacific Ocean took 9 hours for the Celebrity Infinity to complete. This was the third lock that finally brought us level with the lake

“Gatun Lake in the Panama Canal”

It was not quite how I had in my mind. The first locks were what I expected to see and after them, I thought they would be many more, however when there is a huge man-made lake called Gatun Lake, before the next set of locks.

The Canal has three sets of locks. Going from the Atlantic side it starts with the Gatun lock which is a flight of three that raises up to Gatun Lake then a single lock called Pedro Miguel that begins the decent to another two-step flight at Miraflores which completes the drop to sea level on the Pacific side.

Of course if going the other direction it would all reverse, just saying…lol

The huge Gatun lake that is part of the Panama Canal

I’m not sure why I thought it would be lock after lock until we reached the other side… The genius construction of the Panama Canal which takes the ships up 85 feet and then down 85 feet is incredible.

Basically the locks lift you up and over Panama from one side to the other, not actually going through in a way. The main cruising part is across this huge man-made lake which is full with rain water. No wonder it rains a lot here, and good job it does as without it the locks wouldn’t function. I expect they would have to install massive pumps to pump the sea water back up to the top locks. 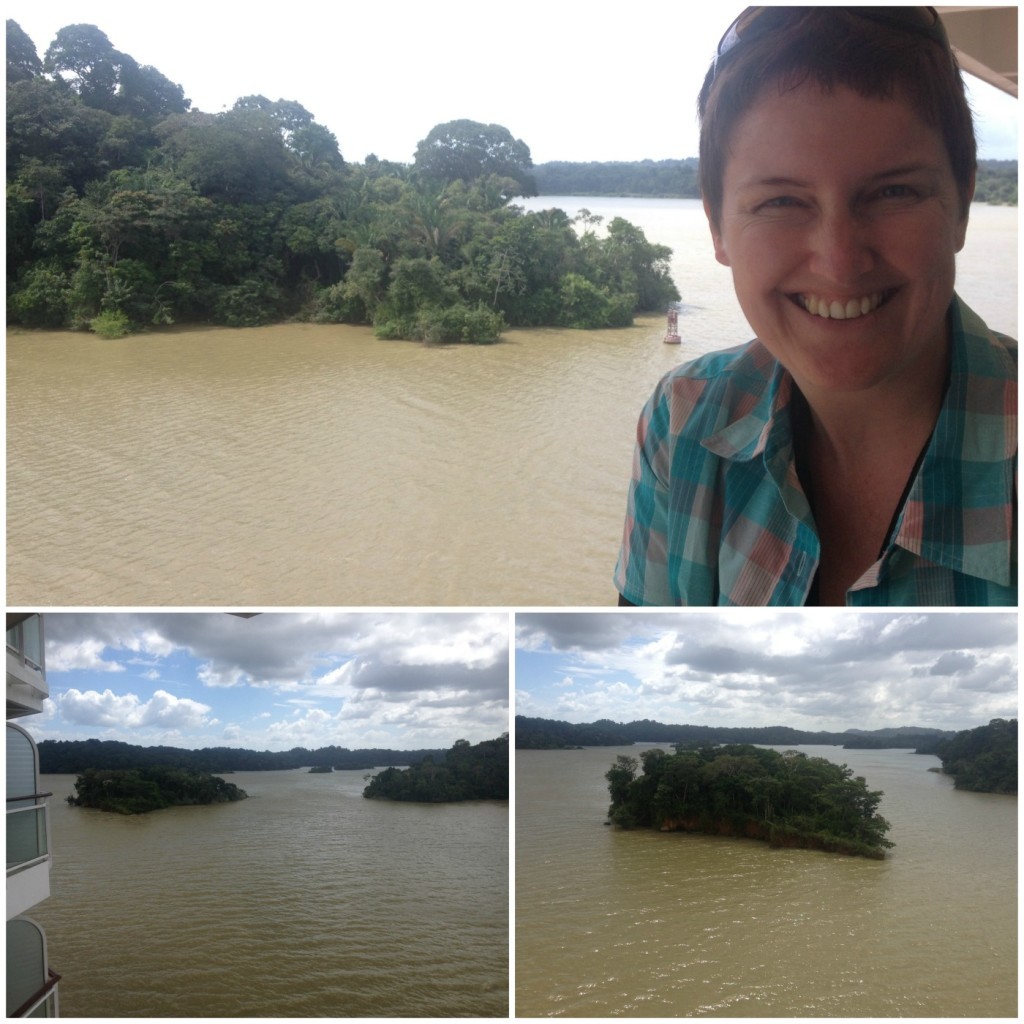 The lake is huge and full of rain water. It is this rain water that fills the locks each time a ship passes through and the rainforest around creates the perfect climate for rain fall which keeps the lake full of water.

The ships must have a pilot on board and it is only the second time when the captain of the ship has no control of the vessel. The first being when in Dry dock and this traversing the Panama Canal.

All other times the Captain still has the sole responsibility of the vessel.

Four mules are attached to the ship by means of metal cables and pulled tight on both sides. These mules which are actually like small train engines are responsible for holding the ship in position for the entire lock passing.

They stop the ship from hitting the sides, even though we had a couple of bumps it was very smooth. They are very important as the ship would damage the canal.

Attaching the metal cables as you enter the lock is done manually with the guys rowing out to the ship. If they miss the hook up then they have to throw the line to try to connect, I saw them miss three attempts to get it done before the ship threw a rope and finally got us connected.

The ship moves under its own power and is not pulled by these trains or mules as they are called, as they used mules back in the early days.

It rained as we passed the first lock and again a little later in the day.

Gatun Lock at the Panama Canal in the rain

Having gone through the first flight of locks I returned to the cabin to dry off and change clothes only to find two officers and our cabin steward in the cabin with the bed totally dismantled and up in the air. They were obviously doing some investigation, as they saw me come in they said that Monika was in the Library waiting for me.

“Everyone’s worse nightmare, a visit to the Medical Facility”

On the way back to the cabin Moni had bumped into Zafer our friend who is the F&B Director. Moni explained to him that she had these bites… Within seconds he was on his phone making calls to certain people and a swift action was taken. He told Moni to visit the Doctor at no cost and get him to take a look.

I can’t let my wife out of sight for a few minutes as all the action takes place… After drinking a tea we visited the Medical center at the very bottom of the ship. Not a place that we are familiar with for sure and one that people want to stay away from for a few reasons, the major one is that it cost’s a fortune to for a visit at sea, let alone if you need some treatment.

Anyway, we had our vitals checked (yes me too) and waited to see the doc. After a while sat in the waiting room watching plenty of staff come for a visit we got our turn. 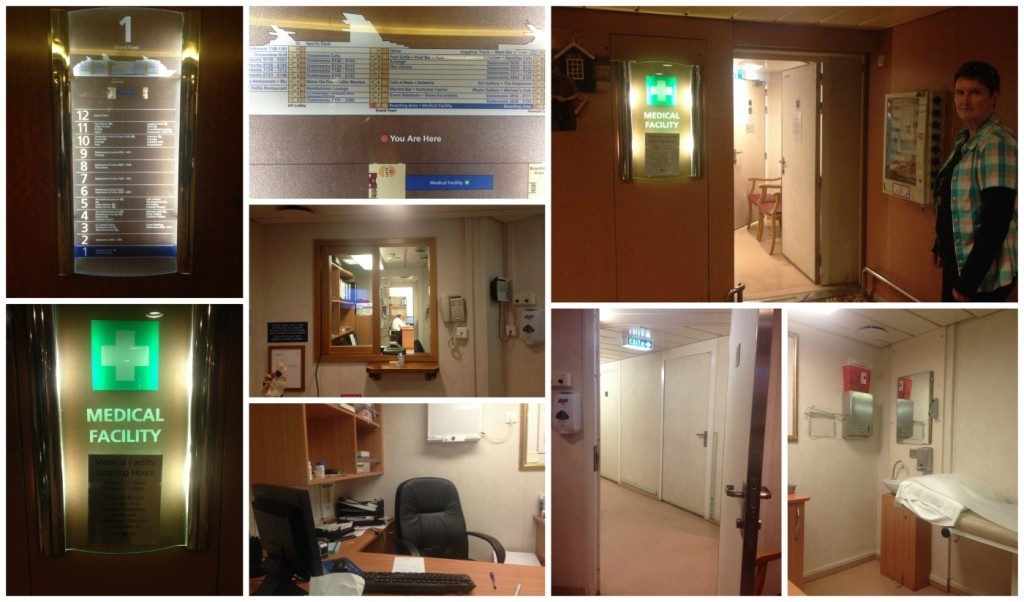 The Medical Facility on Celebrity Infinity

It took less than a minute to look and confirm what we had suspected, bed bug bites. The Doc then gave us some creams and tablets to help with the irritation and inflammation and we were on our way, well not quite that quick, we did have a chat, he was a nice young man from Colombia and we exchanged emails. 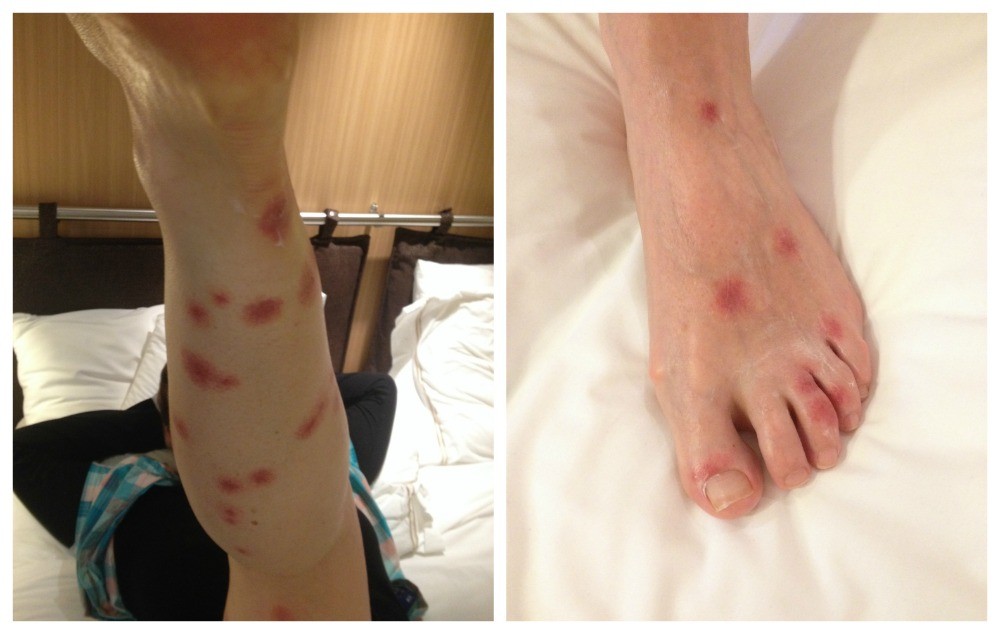 They take this very seriously as with all health concerns and he sent an email off to those that would need to know.

After our first ever visit to see the ship’s doctor we were ready for some food, you don’t ever really get hungry onboard ship but now we were.

Lunch in the Trellis dining room

“Back out to view the second lock”

The constellation Lounge was packed with people viewing from the air-conditioned comfort, we prefered to be outside.

Cruising through the Panama Canal

The second lock called Pedro Miguel which goes down one level.

Workers at the canal can walk across the lock gates with the hand rails that fold down when the gates open.

“Touching the side of the Panama Canal”

This time we were on deck 4 along the side and watched the action from there. Moni was here this morning while I braved the rains at the front. She said it would be cool for us to touch the canal and so we did.

The locks are 110 feet or 33.5 metres wide and the Celebrity Infinity only just fits, like so many other ships they have been built to fit the canal.

Very close to the sides of the Panama Canal

Going down in the Panama Canal

“Only a few inches space between the canal and ship”

These pictures show just how close we are to the sides of the Panama Canal as we pass through the locks.

A different view of the Panama canal locks

In this clip we are only inches away from the sides

“Miraflores Lock is either the first or last flight of locks”

Shortly after this lock came the third and final lock which again went down this time to reach the level of the Pacific ocean where we will continue towards Ecuador.

This is the view from the very front of the ship as we enter in the final set of locks. The building at the very end on the left is a viewing area to the Miraflores Lock.

Having seen the canal from the front and sides we decided to go to the back for the final lock at Miraflores.

The Miraflores lock gates closing behind the ship 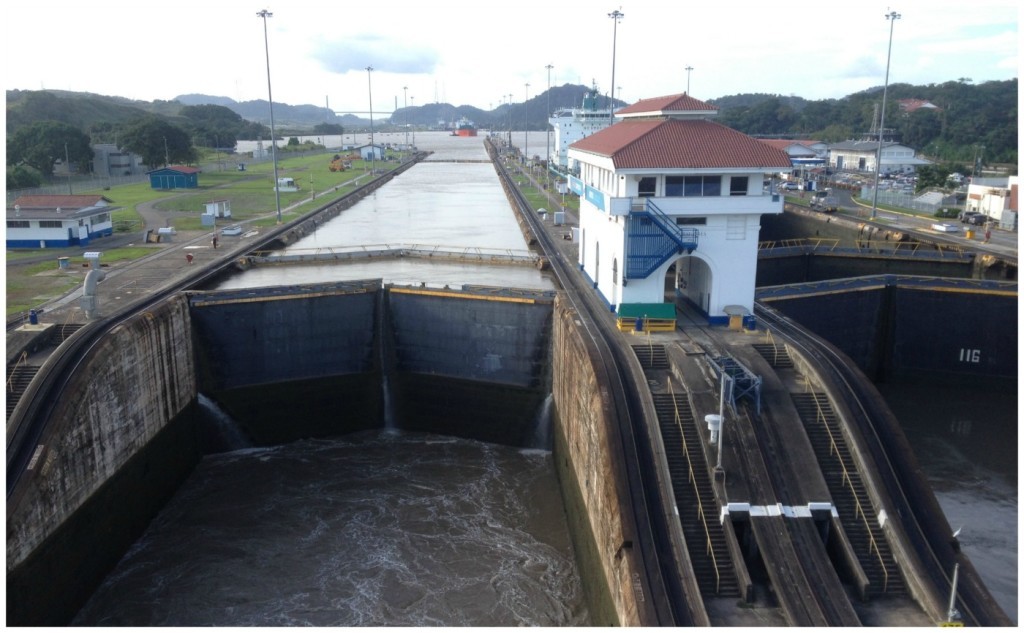 Exiting the final lock for us on the Panama Canal

“A third canal is under construction in Panama”

As we left the final lock which for us going from the Atlantic to the Pacific was the Miraflores lock the construction of the new, a third canal is visible.

This canal is going to be big enough to accommodate the very big ships which are wider such as the Oasis of the Seas.

Construction of the new Panama Canal

“The views to Panama city from the ship”

Panama City in the distance

Leaving Panama behind us

Dinner tonight we chose to have a table just for the two of us in the main dining room. I should have requested that last night, lol. 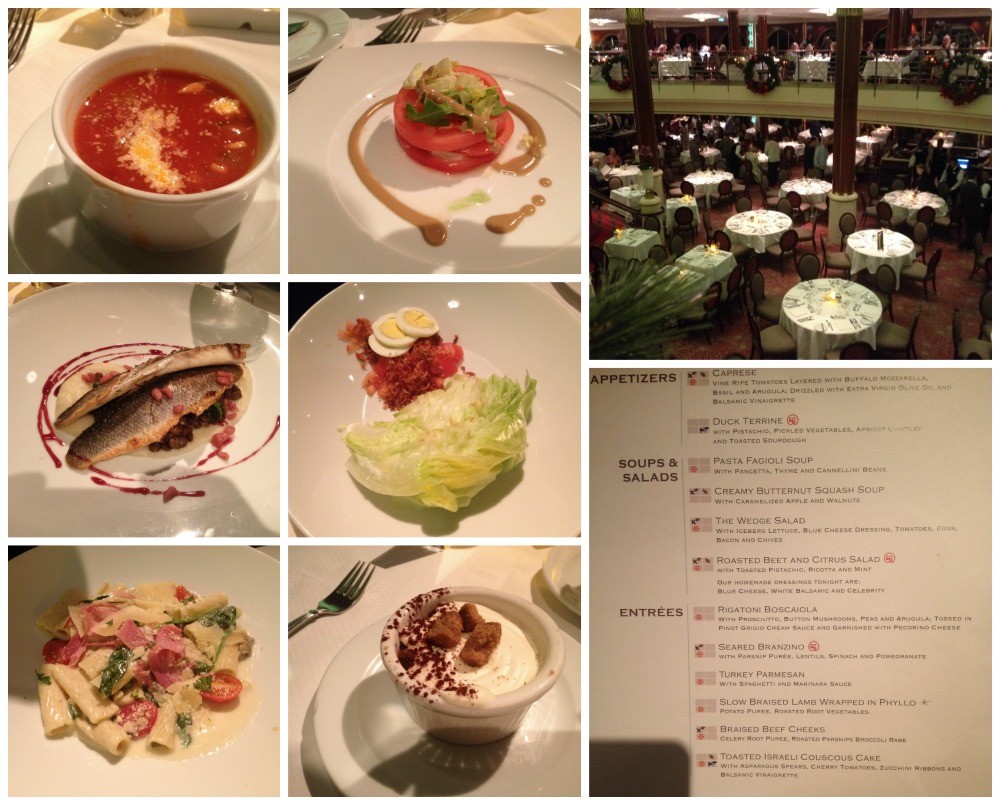 Wow, what a fantastic day. Transiting the Panama Canal was awesome, and I think actually learning about how it was constructed and the history gave us a better understanding why this is such an amazing construction.