A great way to get around colourful Guatape is by renting a bicycle. Even though the town is small, with bikes you will have lots of fun all day and you will be able to see much more than just by walking.

Moni & I had a good nights sleep, probably the best since being in Colombia. The room was dark and once the noise had stopped we slept really well on the very firm bed at Tomate Cafe Hostel in Guatape town center, Ursula however didn’t sleep well on her firm mattress.

“Sunshine after storms in Guatape”

The huge storm that lasted for some hours from around 8pm had cleared away by the time morning came and the streets were all dry apart from some puddles.

Walking out in to the square which is basically the hub of Guatape you can’t help but be drawn to the immaculate bright white facade of the Church of Guatape with its rust coloured trim. You really can’t get lost in Guatape because you just head for the church and you will return to the square. 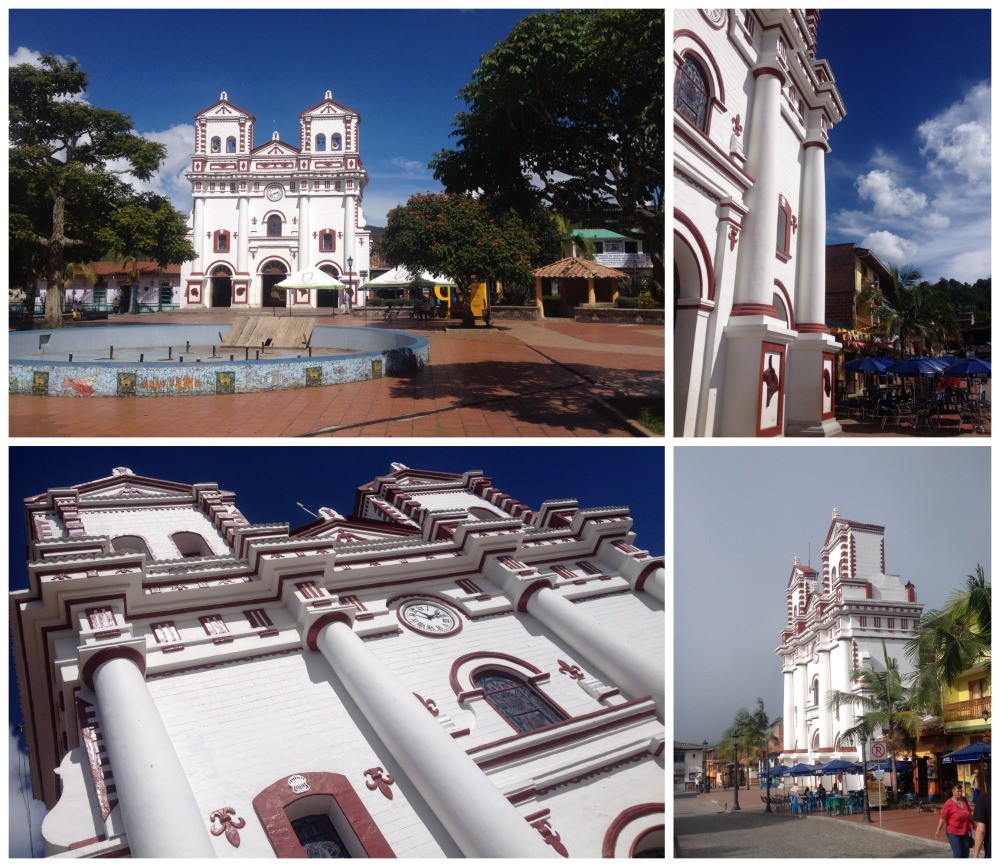 The immaculate church of Guatape

We wanted to rent bicycles this morning and Juan Carlos from the hostel gave us instructions where to find the bike shop, next to a butcher just off the square, and there it was, a bike shop which doesn’t look like a bike shop at all at first as the entrance is full of other trinkets. You could easily miss it.

The bike shop next to the butcher in Guatape

Actually, if you closely you can see the wall plaque with a person riding a bike towards the bottom right corner of the left photo, how could you mistake this shop, lol.

Deeper into the shop bike gear and bikes are clearly visible, with a repair area out the back, we were at the right place. The man tested the bikes and made any adjustments and we were soon on our way. The three bikes cost 45,000 peso $24.93 AUD for the entire day, just over $8 AUD each.

Our ride started up hill on the cobbled road with Ursula leading the way, then down to the waterfront, over a bridge past some army barracks and up a more hills. Ursula is somewhat fitter than us and we were pleased that we could eventually turn around at the top, catch our breath before free wheeling back down.

Our bike ride in Guatape, cobbled streets, the bridge out-of-town, the view at the top of a hill

After that, we were ready for a rest, a pit stop, where we enjoyed a good Colombian coffee.

We continued to ride around the area up and down the streets, past all sorts of houses, a school, a huge swimming pool, a great looking football pitch, shops and more. 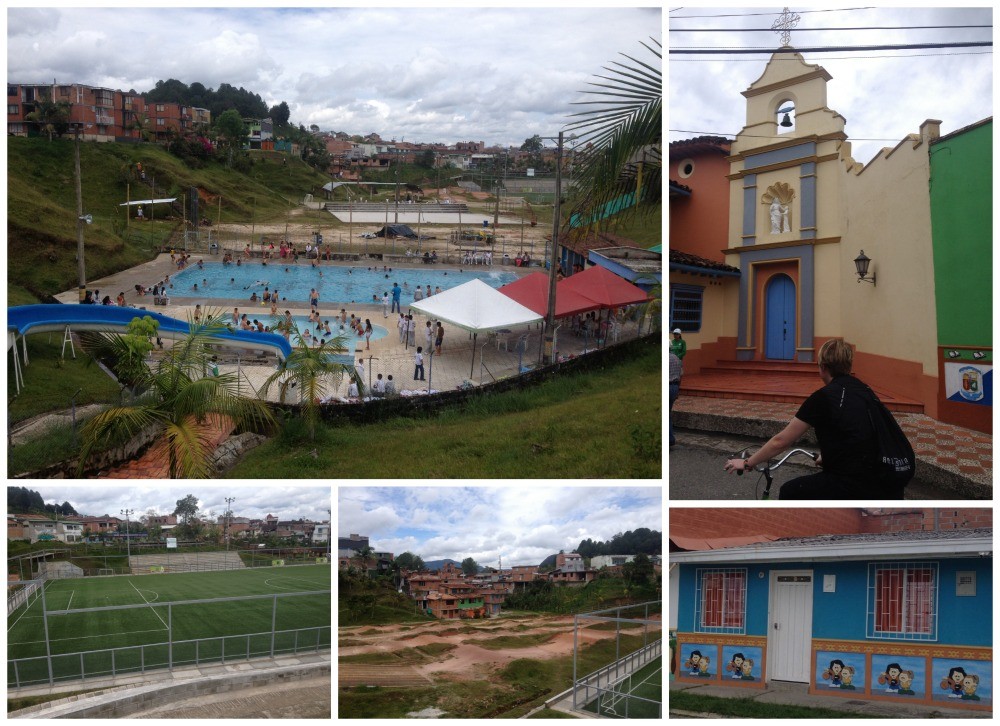 Guatape has some great facilities for a pueblo, a couple of pools, BMX track, football pitch, various churches and schools

“The colours of Guatape are vibrant and plentiful”

The fronts of nearly all the buildings have 3D plaques with different designs on created and painted by hand depicting what the family or business represents or in some cases what they believe in. 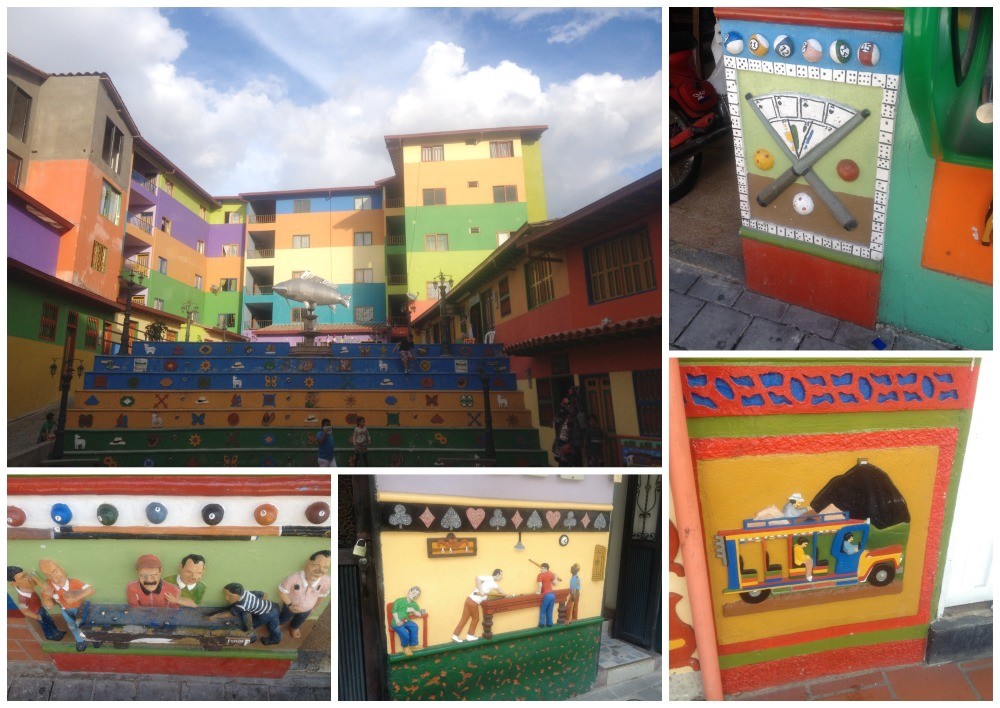 “The people of Colombia are very generous”

As we stopped at the top of a road where a lady was cooking potatoes, Moni was looking around at what was being prepared when the lady offered her some, within a few minutes we were all eating boiled potatoes while sat on the street.

The lady didn’t want anything for them, and refused our peso’s, incredible. We gave the plate back and thanked her before riding on. 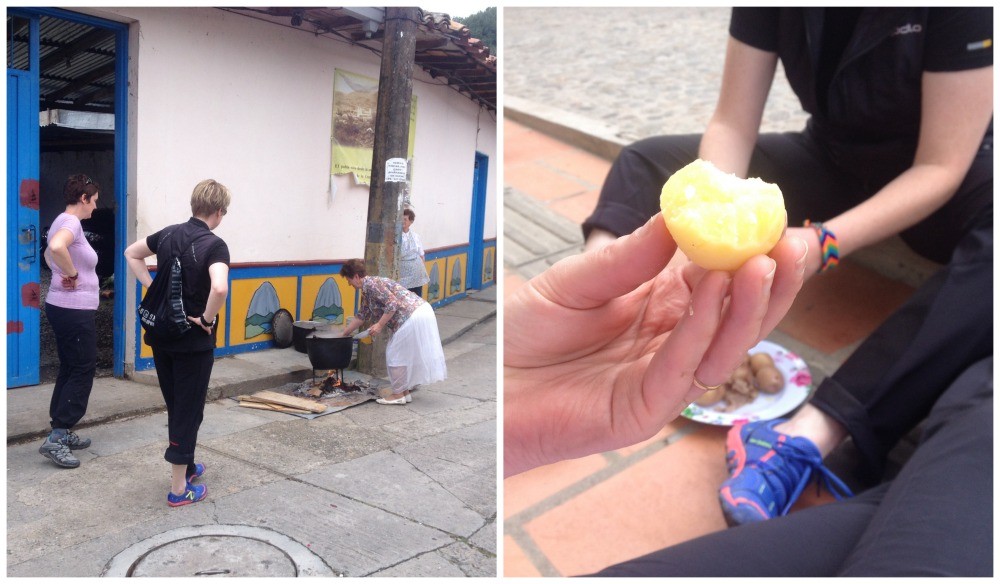 Eating potatoes (papas) on the street in Guatape

After peddling up and down some more roads heading out-of-town we took some photos of Guatape pueblo and of massive rock in the distance El Penol with its 740 steps which you can climb for amazing views.

Looking down to Guatape pueblo, and views to El Penol

Eventually we came to the waterfront where we stopped and had a huge lunch.

“Lunch with a view in Guatape”

Lunch was Soup, salad and pork for me, and fish for Moni, both with mushroom sauce, we had a couple of beers and enjoyed our lunch before riding on again. 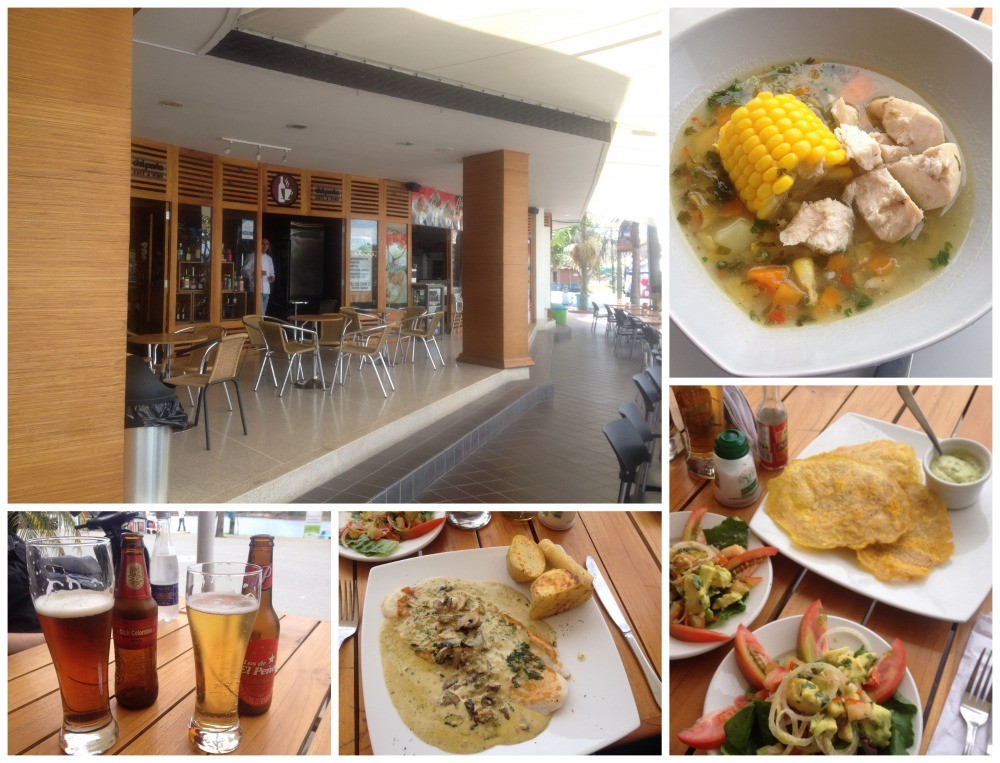 Lunch in Guatape at a more modern place along the waterfront

After about four hours we decided to return the bikes and continue on foot around the town square.

“The painters palate of colours in Guatape pueblo” 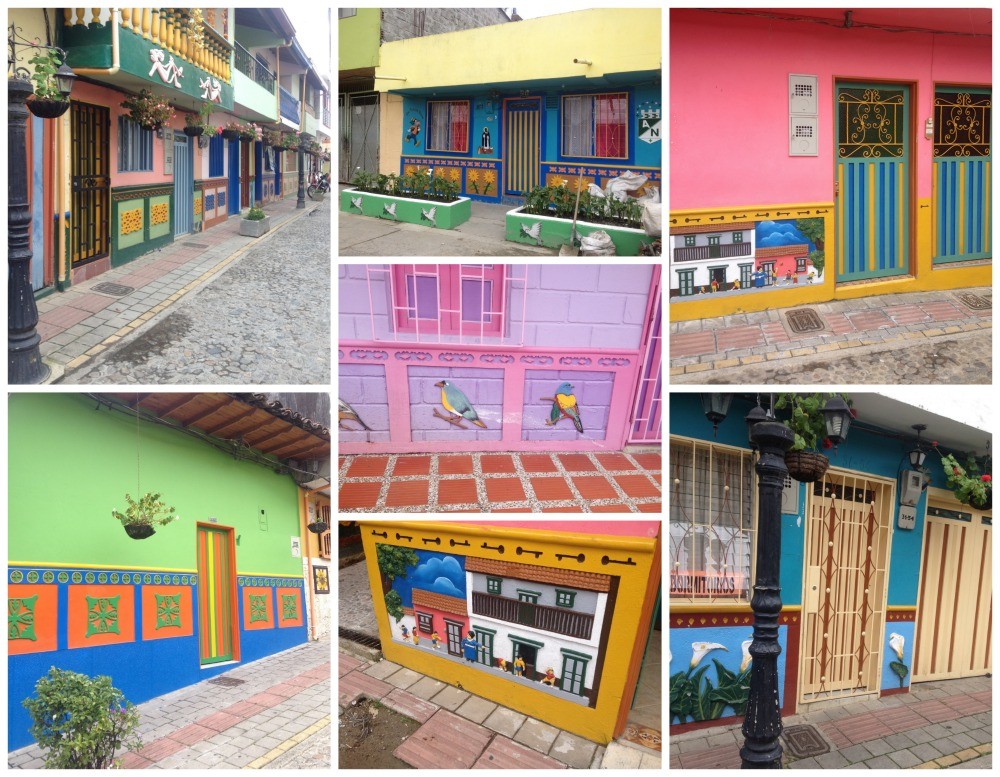 Ursula bought some really nice baby bananas from a fruit stall which she enjoyed, I had one and as they were so good, on the way back we stopped by and bought some more. The fruits in Colombia are really very tasty I think that’s because they are free from chemicals. 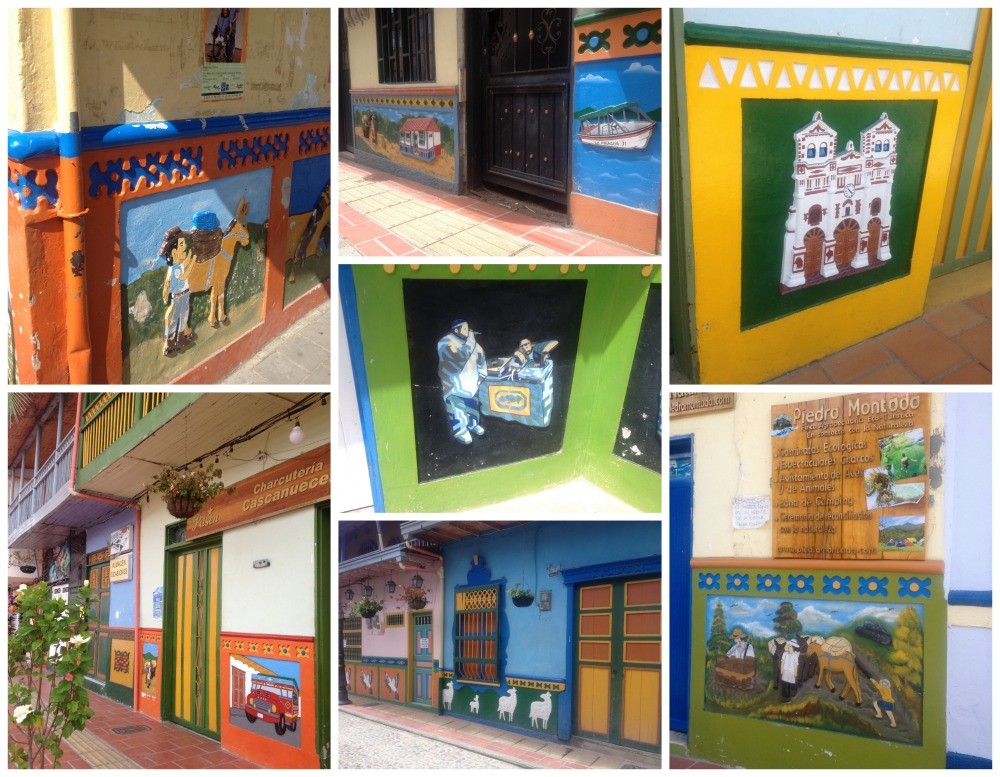 “The cobbled streets are full of life throughout the day”

Nothing seems rushed in Guatape with locals enjoying a relaxing lifestyle, and even the stray dogs seem like they are well looked after. We had an ice cream and walked around some more, with Moni finding a pair of shoes in a small shoe shop. 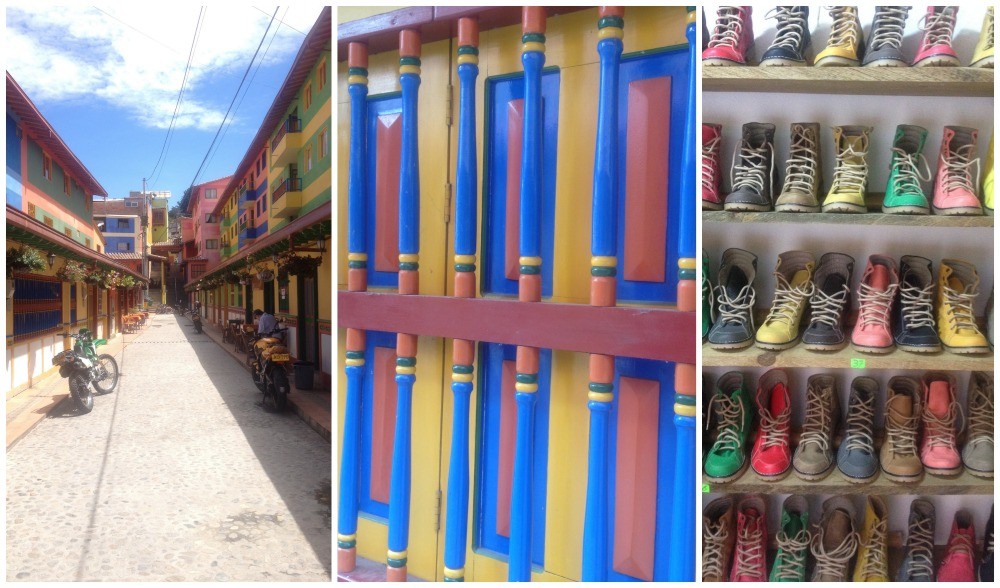 Even the shoe choice is as colourful as the town itself

Walking through the cobbled streets you could think that you’re in a scene from Mary Poppins or at movie world. 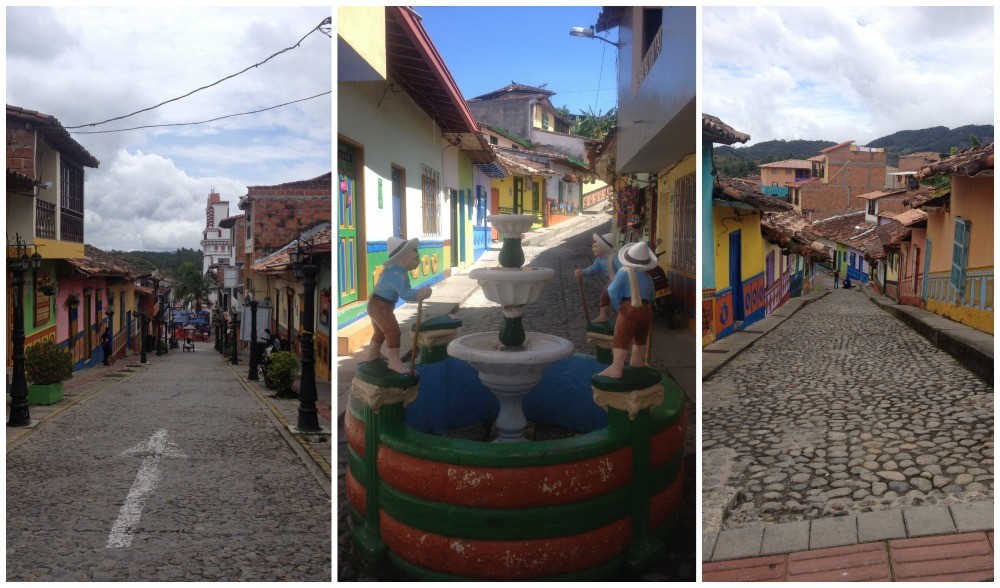 The cobbled streets of Guatape

By now it’s time to return to the hostel to rest our weary limbs for a while before we head back out for dinner at Pizza D’Luigi which we happened to spot earlier in the day.

The pizzas were great, traditional thin and crisp, Luigi himself is the chef and the set up is very basic as they have recently moved to this premises, the pizza are not cheap for Colombian prices 18,000 – 27,000 peso $10 – 15 AUD but they are good. 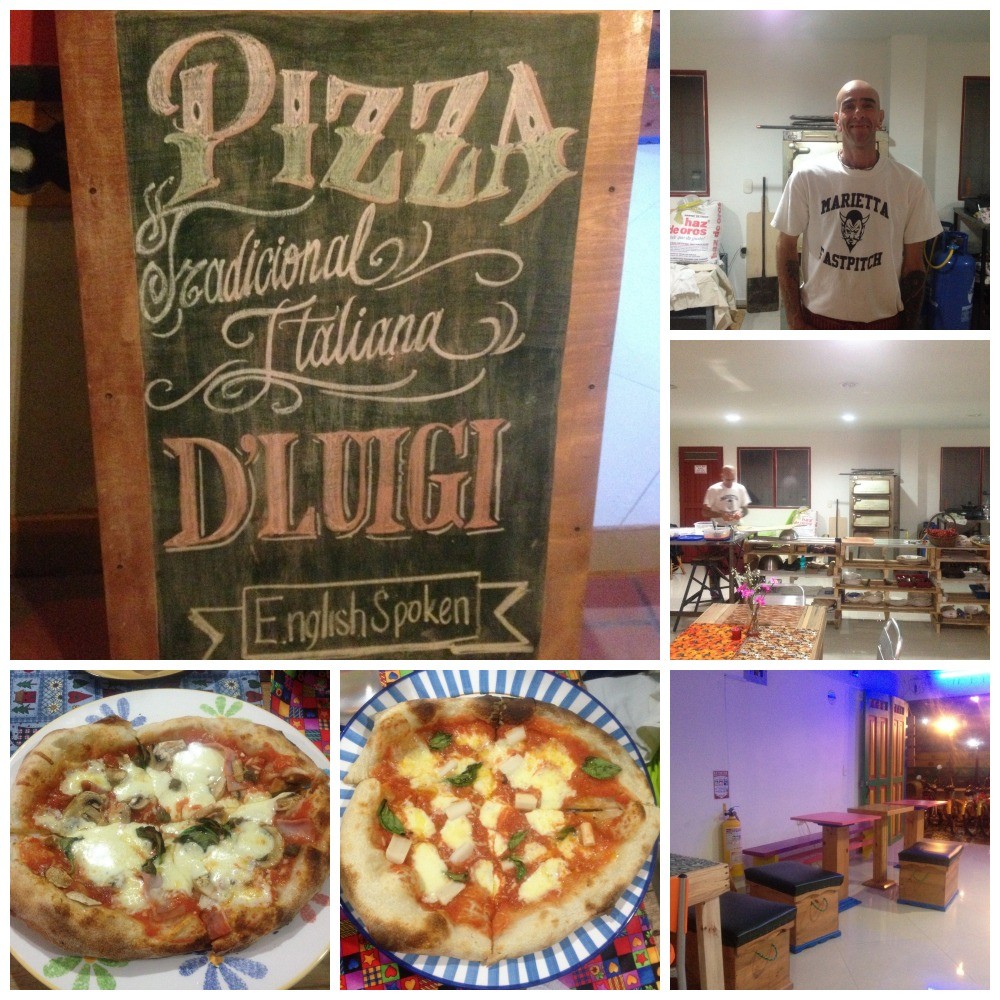 In the same shared space at the front is a chocolate cafe called ‘Trufflen Von Rossi’ and you can sample some wonderful chocolate truffles for desert or anytime during the day. 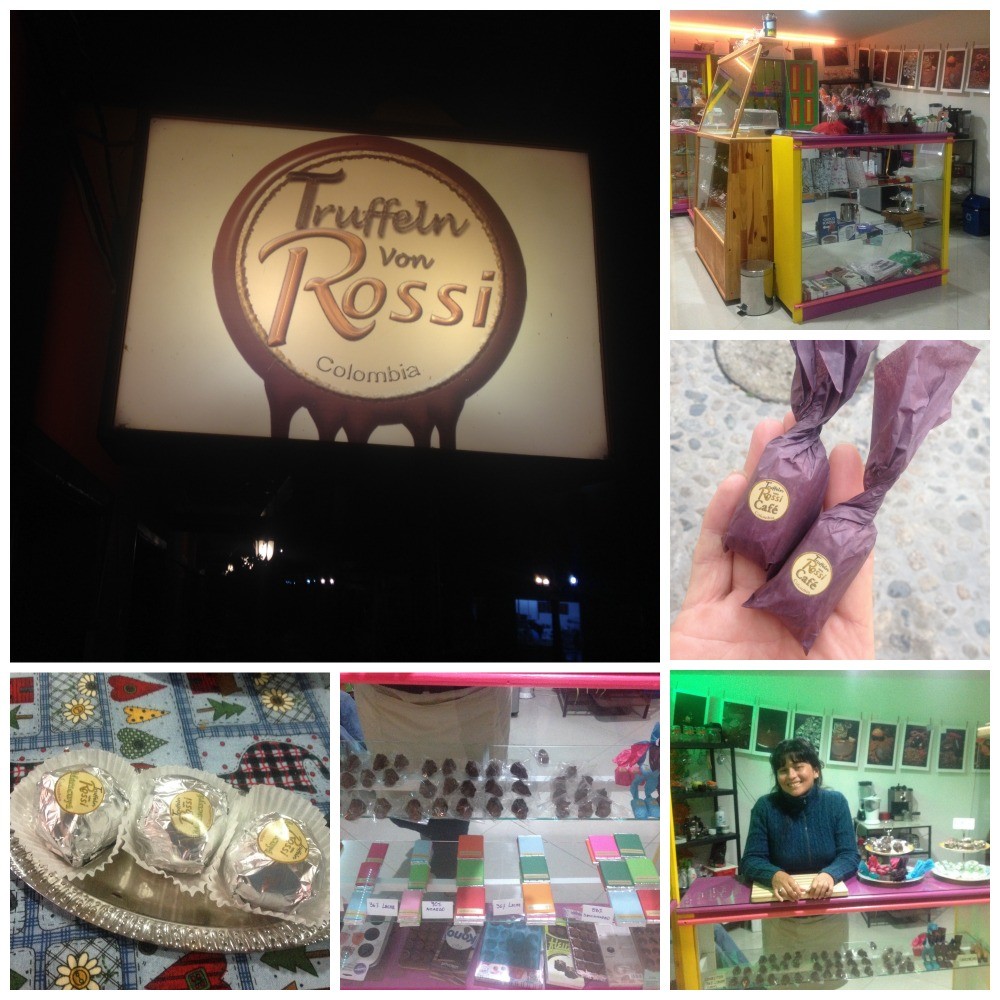 You might miss that this is a pizzeria when looking in during the day as we almost did, just thinking it was the truffle cafe, but don’t miss out if you like good thin pizza and chocolates.

“The colourful church of Guatape at night”

Back at the square a fitting end to the day was the church of Guatape displaying itself in rainbow colours, which just sums up Guatape in a perfect way peaceful, relaxing, harmonious pueblo… 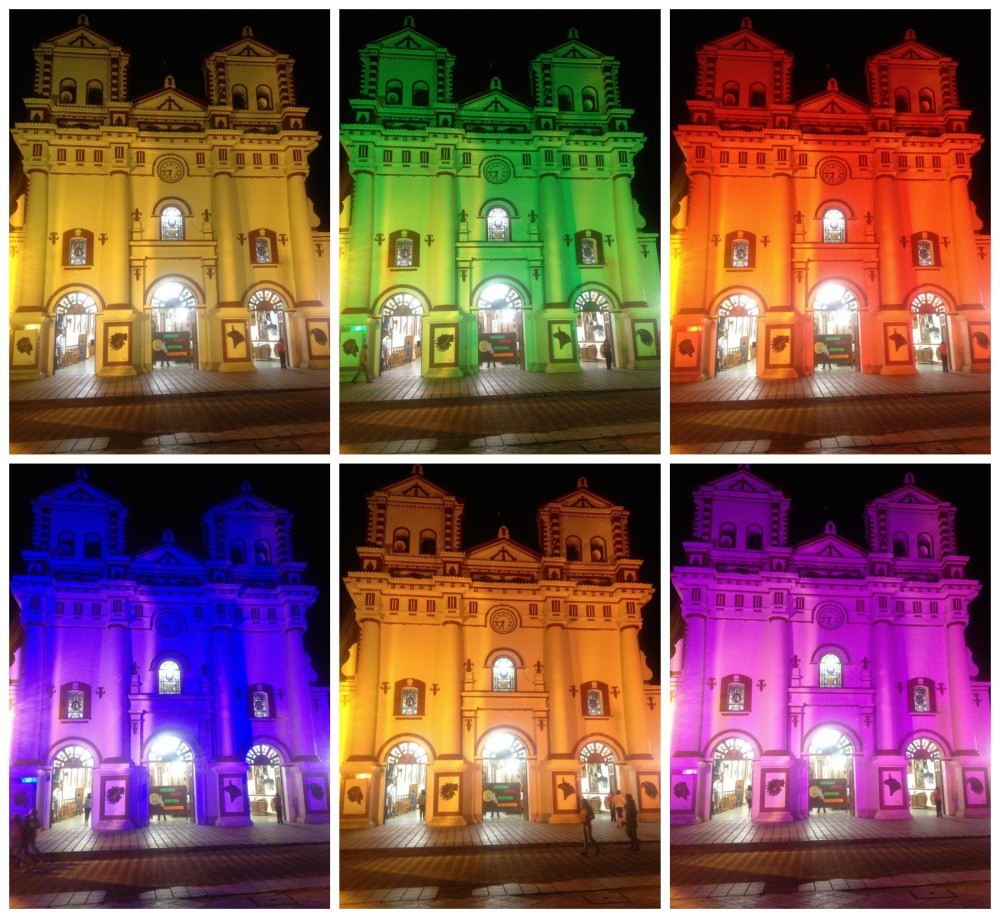 The colourful church of Guatape at night

When visiting Colombia and Medellin, make sure to add Guatape to the bucket list, a truly wonderful place.