Can climbing 740 steps really be worth the trip to El Peñol Guatape? Guatape is a very quaint town 86 kilometres from Medellin and draws many locals and tourists alike, possibly the main reason for this is the Monolith called El Peñol (the rock) which is just outside of Guatape in the town of El Peñol. On climbing over 700 steps to the top of El Peñol or Penon de Guatape or Piedra del Peñol as it is also known, you are rewarded with awesome 360 degree views.

There are plenty of ‘tuk-tuks’ in Guatape town centre and for 10,000 peso $5.54 AUD they will take you to the top of where the rock is. You can also get a jeep for 1500 per person but they don’t go to the top, however at the bottom of the rod to the rock are more ‘tuk tuks’.

At the top we purchase tickets for 10,000 peso each $5.54 AUD and begin the walk up. The rock El Peñol is a monolith, like Ayers Rock in Australia and at over 2100 feet above sea level is pretty high. The hundreds of steps up the 650 feet monolith are in good shape but do vary in size which is really the only thing you have to be concerned about, other than that, the climb is relatively easy

There is an up and down set of steps which I think on a busy day is great, I could imagine it being quite congested if there were lots of people.

“Step by step we climb to the top”

The climb up all 740 steps to the very top took Moni & I 25 minutes with many breaks on the way, it was not difficult but exhausting, saying that, Ursula was a lot quicker than us and was up in 18-20 minutes. You don’t have to count the steps either as they are numbered at certain points, 125, 250 etc.

The views are great on the way up even though we had a cloudy day. At the semi-top there are toilets and refreshments if you want to purchase and catch your breath. The actual top is at the top of a man made structure that looks like a castle or turret and it gets quite busy, we can only imagine what it would be like on a weekend.

At the very top there is a final big step that is number 740 which everyone wants to take a photo of and here you get the 360 degree view of the area.

Dodging people to get the perfect photo is not easy and you will probably have to settle for a shared masterpiece.

What many people don’t know is that what you are actually looking at down below with all those lush green islands is a flooded village.

The visual aspect is very beautiful, but this is totally man made, as this is actually a huge reservoir of water that feeds a hydroelectric dam to power parts of Colombia. You can visit the town of El Peñol where it has a replica of the old town before it was flooded.

The view from El Peñol or Piedra del Penol

“On the walk down we could feel it in our legs”

After spending some time at the top and the small tourist shop in the turret, we made our way down. This was considerably quicker, but this time you could really feel it in your legs, we were happy to finally go through the exit gate. In some places it gets a little tight but nothing to worry about.

The walk down the 740 steps of El Peñol, Guatape, Colombia

A walk around the bottom area where there are more tourist shops and restaurants which would be packed with tourist busses on a busy day. Here you can take some photos of the monolith from the base.

We find a ‘moke’ to take us back to our hostel again that costs 10,000 peso. After dumping our stuff we head down to where the bus stop was as I had seen a sign advertising the menu de dia for 6000 $3.32 AUD even though it was just gone 3pm. 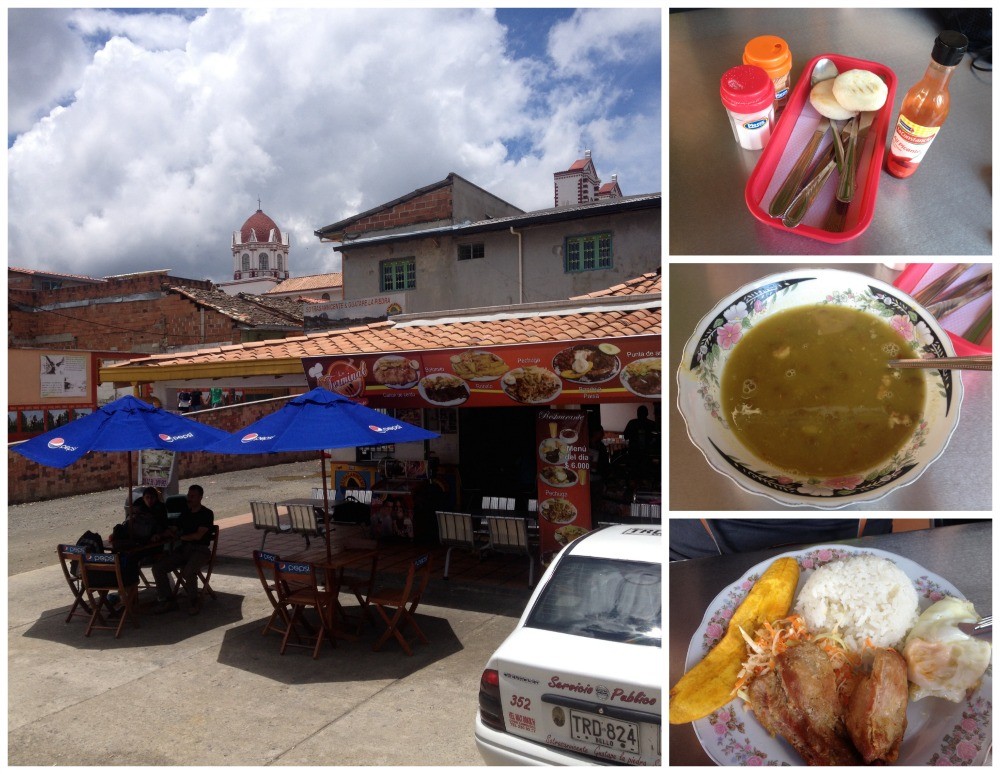 Restaurant El Terminal at the bus stop in Guatape

It was quite nice and we enjoyed it, then we wanted to buy our return ticket for the bus on Saturday but the lady said we could only get it on Saturday, that’s what we understood anyway. After a short walk around the town where Ursula bought some fruits and then back to the hostel.

A storm was brewing and not before long it was raining, and lightning in the distance which eventually was over us in town. We stayed in and made plans for tomorrow, chatting about what an awesome day we have just had.

A visit to El Peñol is really worth it and the actual climb up to the top is not difficult, just take it at your own pace and enjoy the views.