At Sea cruising towards Grand Cayman

Breakfast on sea days in the Golden Pearl dining room is brunch which goes from 9am to 1pm, and after a great sleep in we were ready for a feed at 10am.

The brunch food was great and we both enjoyed it, Moni having a cocktail of the day courtesy of being a VIFP of Carnival. As a returning Carnival guest you are treated to a beverage of your choice up to $9 I think. 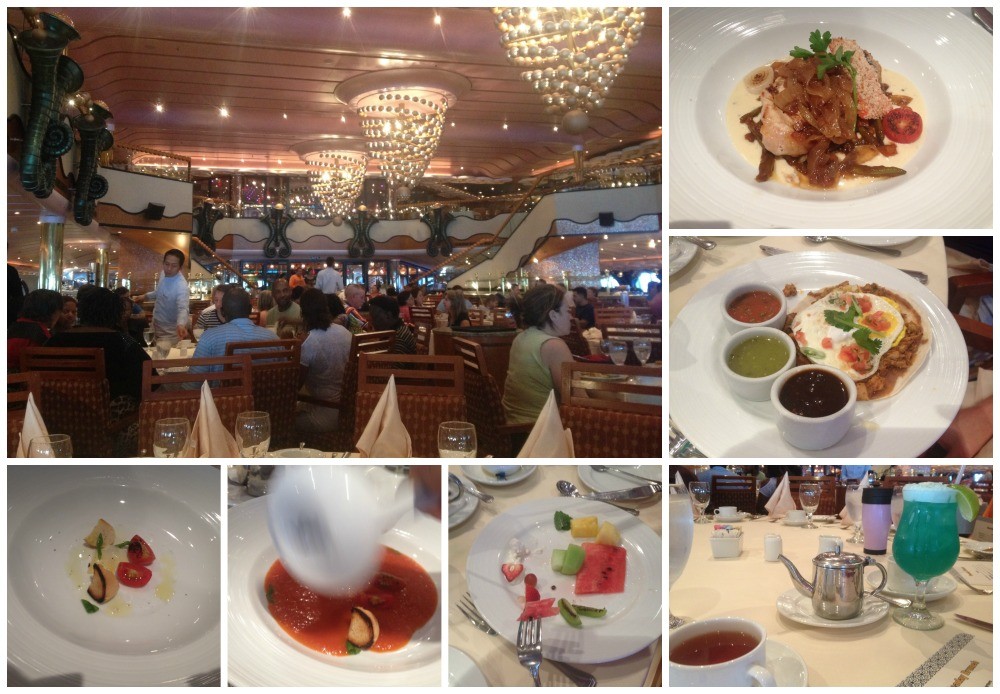 Next up… I have just spent 45 minutes on Skype with MasterCard dealing with fraud transactions.

Our credit card has been stopped and I received an email regarding the fraud and that MasterCard have put a hold on the use of the card. Good thing, seeing as the fraudsters had made 4 transactions that amount to just under $2000 AUD.

Here’s the thing, they actually made a counterfeit card and used it in person at some places in Miami.

The hotel where we just stayed was the only place I had used that card in over a few months and they made a swipe copy to cover incidentals. So someone, or a few of them at the hotel are criminals that work together to produce them.

I’m just happy that MC spotted it and stopped the card, the only thing is that those bastards have got the products they wanted and now MC have to fit the bill…thats why we keep having to pay more for these insurances. I hope they get them and lock em up.

“Banks and finance institutions just don’t get it”

The worse thing is, apart from it costing a fortune to be online from a cruise ship is that we now have to get new cards. Not so easy considering we are Location Independent meaning travelling full-time. That’s a topic that MC really don’t get, even though they will replace our cards when we arrive back in Miami no problem, the replacements are only valid six months and the new ones will be sent to our Australian address, which we will then have to forward to where ever we are.

So, from now on we will never be giving a cc to a hotel, they can do what ever they want but no cc anymore.

“Dinner at the Pinnacle Steakhouse on Carnival Splendor”

On a much better note, we dined in the Pinnacle restaurant tonight which is a speciality venue on board the Carnival Splendor. There is an extra cover charge per person of $35 whether it is worth it, I’m not so sure. 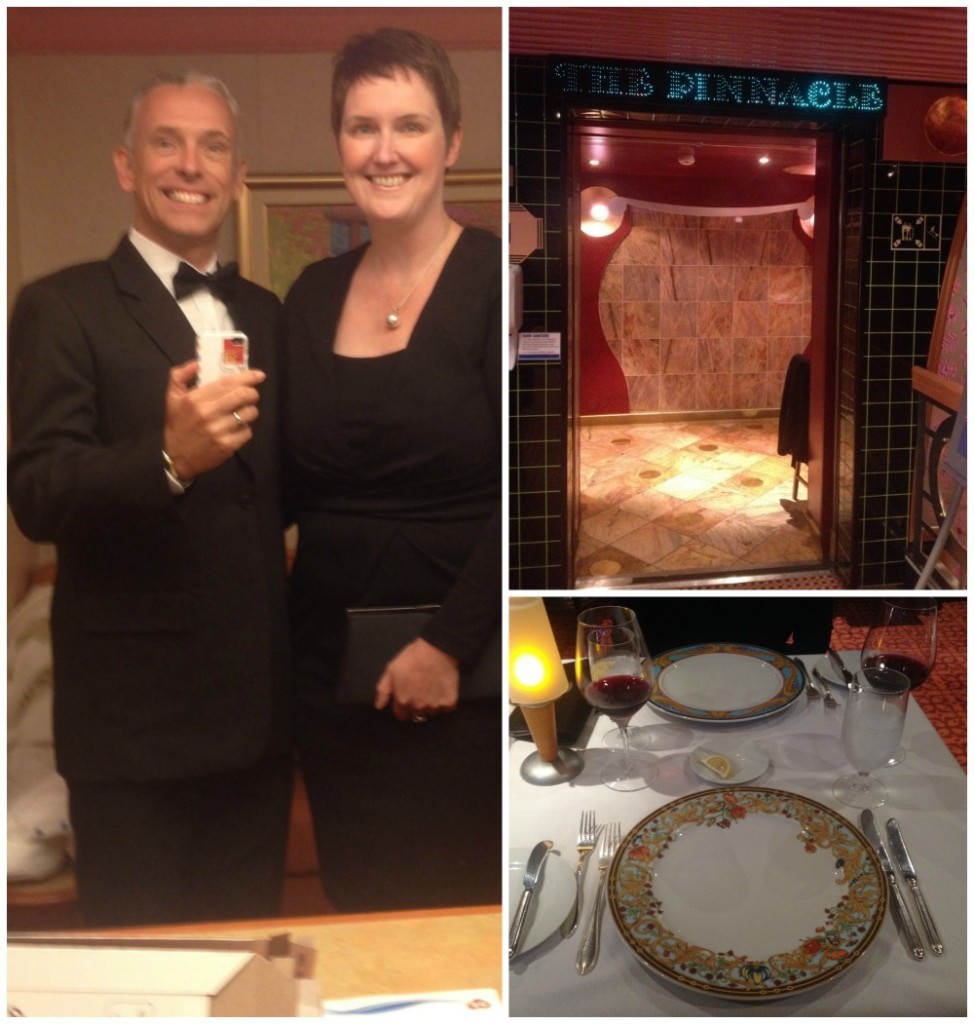 Dressed up for dinner in the Pinnacle

Lets take a look at the menu and our dinner.

The menu does have a few special dishes on it that are not what you would get in the main dining room however there are many that you can which kind of makes me wonder why you would dine here and pay the extra.

We have listened to the feed back from some guests saying that the steaks are huge and great, and with it being a steakhouse that is what you’d expect.

After placing our orders we received a greeting from the chef.

Greetings from the chef

A capsicum soup with crouton and a fish ceviche with a crisp. The presentation was great and I have a feeling that this is going to be the wow factor here. The crunchy part of these dishes were both soft and had lost their crunch which is a let down. A shame that chefs don’t pay enough attention to the smallest things.

First course of Beef Carpaccio and a Lobster Bisque

These two dishes were presented very nice and had awesome flavour, probably one of the best Lobster Bisques. A shame about the pastry fleurons though.

We both chose a salad to have in between.

Again presented very nice. I do think though that these are dishes very large and maybe meant to have as a starter. A sad thing that we notice on nearly every menu is the repetition. Being professional chefs of many years it is easy for us to spot these mistakes which just shows the lack of expertise in compiling a menu.

As you can see, three of the four salads on offer contain cheese and two have blue cheese. If you don’t like cheese then your stuffed.

Next up was our main dishes.

Both our main meals were cooked very good and the flavours wonderful. Presentation was great also, along with the sauces and vegetable sides. Once again they are large serves which I think is what really excites the clientele on board.

We enjoyed a nice bottle of complimentary house red as part of the dine on the first sea day deal (normal price is $30) If you are going to go then this makes it the best day for sure.

The Main dishes which are called Entreés in the USA are mostly steaks which is what you want in a steakhouse, however they do have a chicken, fish, lamb and a pasta dish.

TIP; don’t book online before you go as the best deals are nearly always onboard.

Not many desert options, but we did chose the chocolate sampler. Again presented well and plenty to share. The flavours were nice, but not so much chocolate rather ice creams with different deserts.

All up it was a nice evening. If this was a restaurant on land in my town I’d probably not go again as there is not enough on the menu to excite me back. The $70 including a bottle of wine is great value for sure and you would be very hard pressed to find that on land for sure.

Presentation is the key here in the Pinnacle Steakhouse on the Carnival Splendor.

After dinner Moni had another coaching call and is online as I write this post.

Tomorrow we will be in Grand Cayman from 7am to 4pm where Kylie will meet us after lunch.

This was our animal creation from towels tonight. 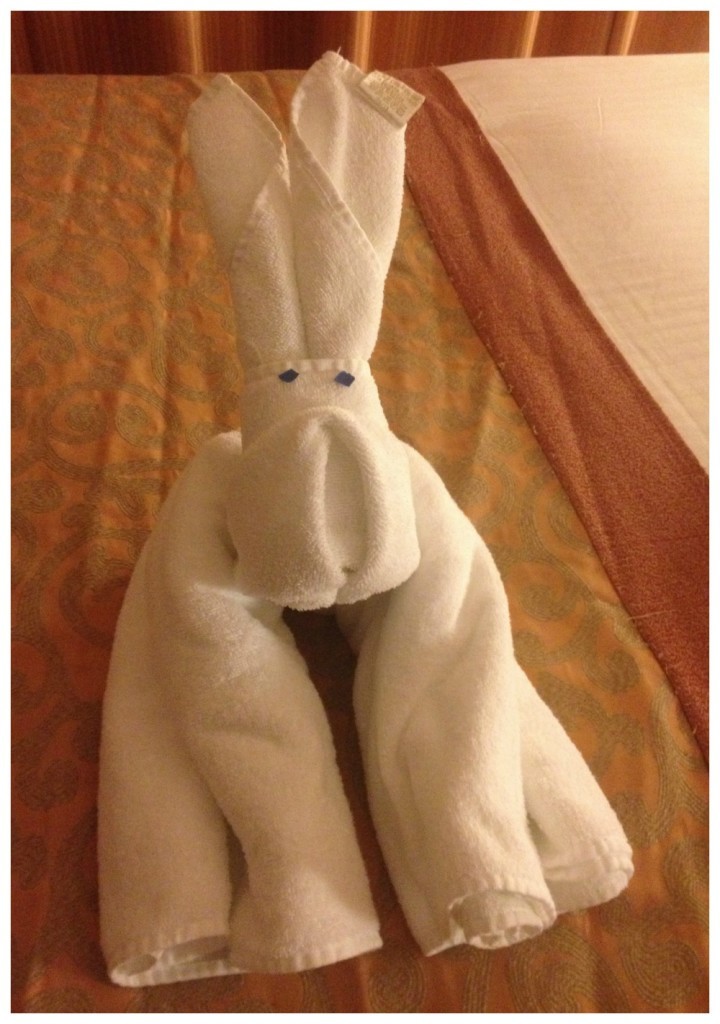