After a day and a half at sea we arrived in Nassau at 12.30pm and after lunch we headed ashore. The entrance to Nassau looks quite small yet these huge ships maneuver here with ease, like floating gentle giants.

The shipping entrance to Nassau

In the photo above you can see the fifth ship arriving in the Bahamas today. So roughly Nassau will increase the population by at least 12,000 people for the next 5 – 8 hours, which is really crazy when you think about it, all these passengers trying to visit, see & do similar things. 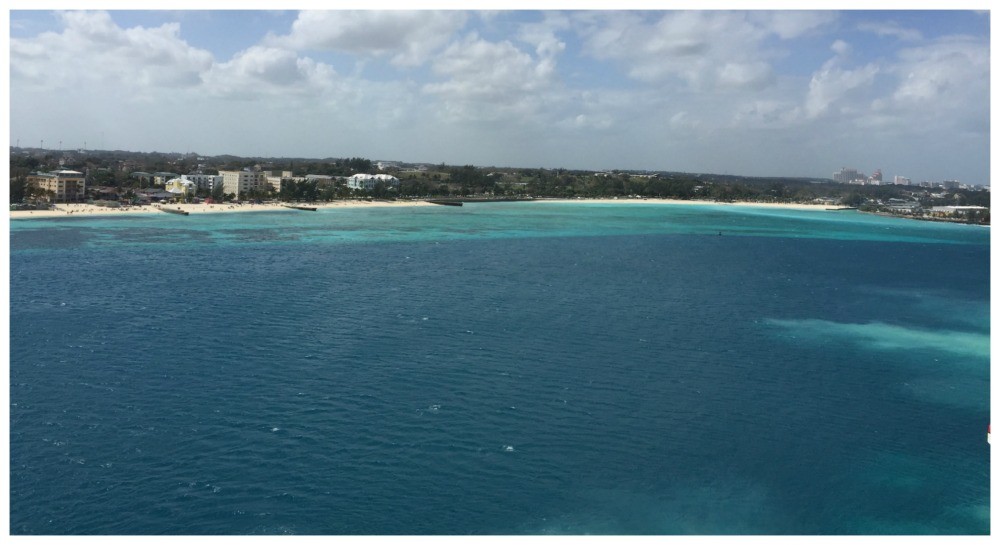 Eventually we dock alongside next to Celebrity Reflection, also in port were Disney Wonder, Carnival Victory and Carnival Sensation. 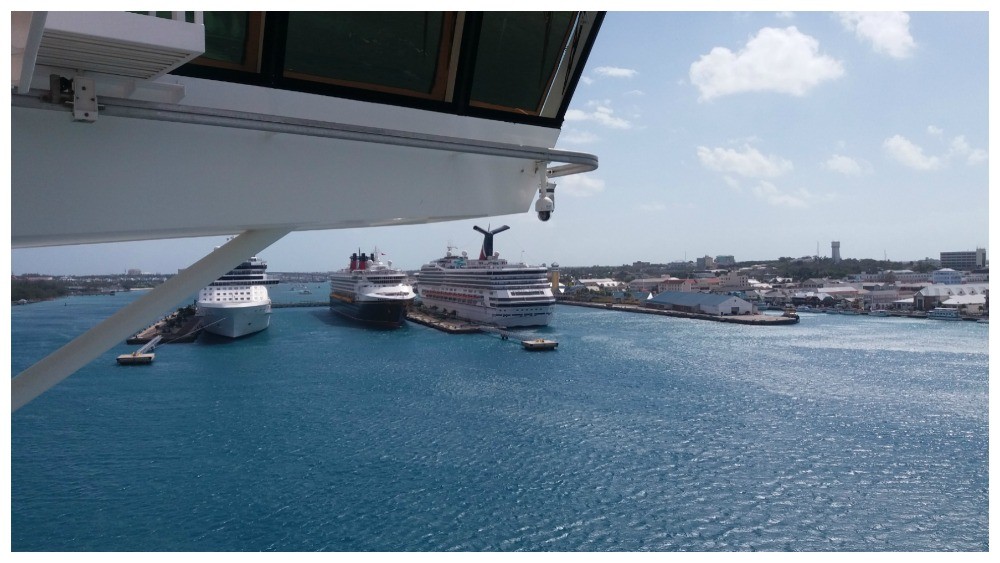 Welcome to Nassau and the Bahamas

This is the view we had from our balcony, the calm protected waters of the harbour with the choppy Atlantic Ocean on the other side of the breakwater.

Nassau Panorama looking out to sea

Real estate people always talk about location location… well would this then be the perfect waterfront property? I personally don’t think so. 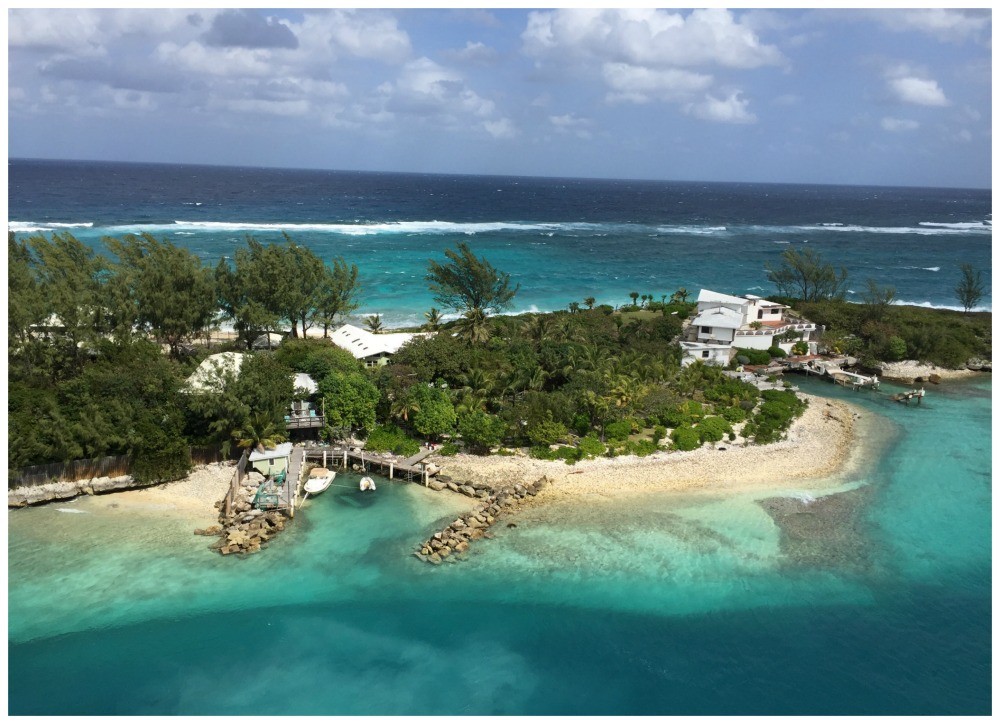 This is really waterfront living

As you can see, the famous Atlantis resort is very close to the port as the crow flies. 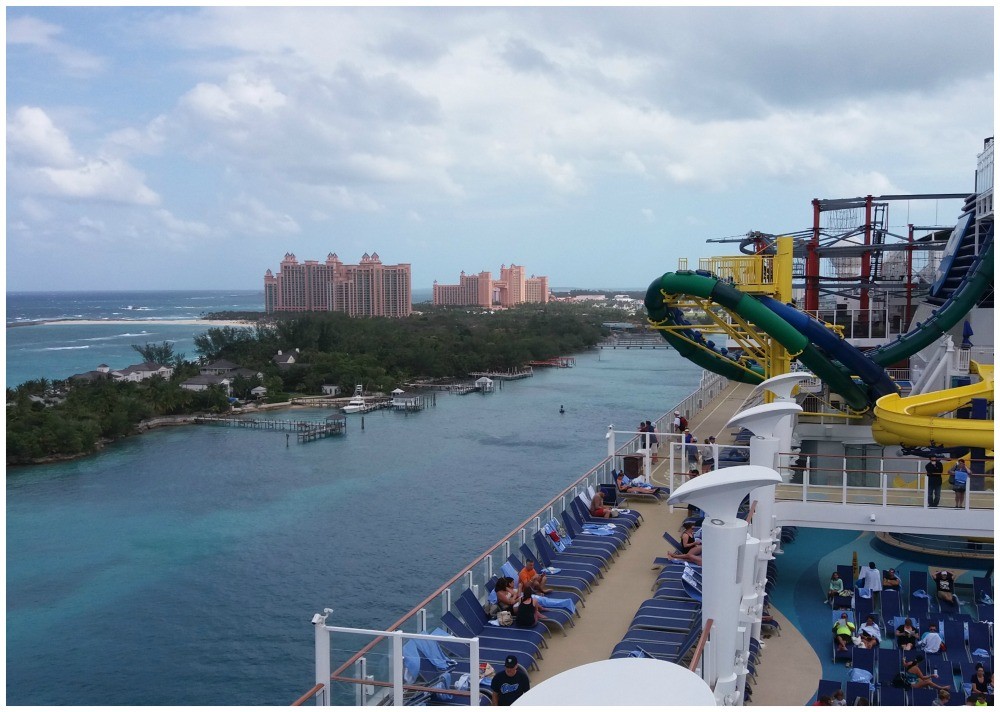 Atlantis on Nassau seen from the cruise ship

Welcome to Nassau and the Bahamas

Once we get off the ship, it’s a short walk to the entrance to town. First up are some markets stalls and a bunch of guys looking to give you a tour.

A glimpse of Nassau

Once again we hadn’t booked a ship excursion and therefore did our own thing. Similar to the previous two ports of call, St. Thomas USVI & Tortola, British Virgin Islands we waited with a few others to fill a mini bus and then had a bit of a Nassau tour. We paid $20 USD for this two-hour tour. 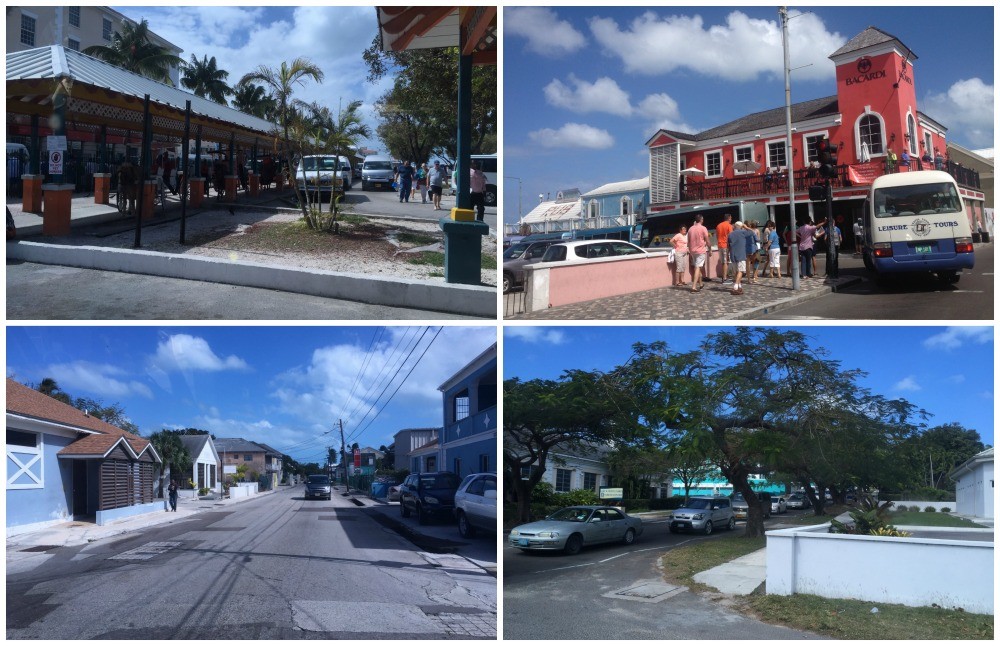 After leaving the port area the driver took us through parts of the town and suburbs before arriving at the Queens Staircase also known as the 66 steps. Well what can I say, we got out of the mini van and walked along this way and up the 65 steps the 66th has been lost due to a raise in road level.

Built in 1793 & 1794 by slaves and provided a direct route to the city of Nassau from the Fort Fincastle above. They were given the name Queens Staircase in honour of Queen Victoria who reigned for 64 years (66 steps) between 1837 to 1901… A very strange reason as nothing really matches, step count or dates she reigned, the only real connection is that she was Queen of Britain and that the Bahamas was a British colony. 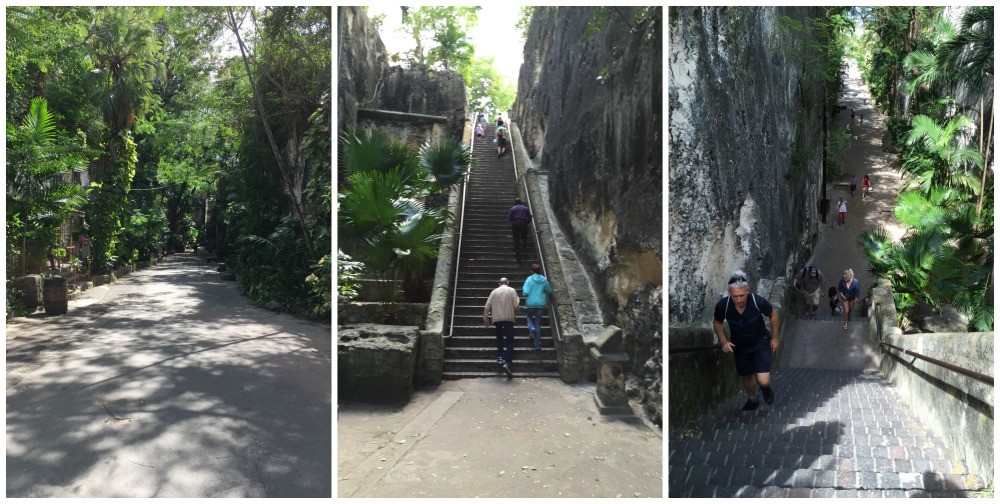 Moving on… At the top of the steps is the Fort Fincastle from around the same time, and for $1 you can enter the fort. 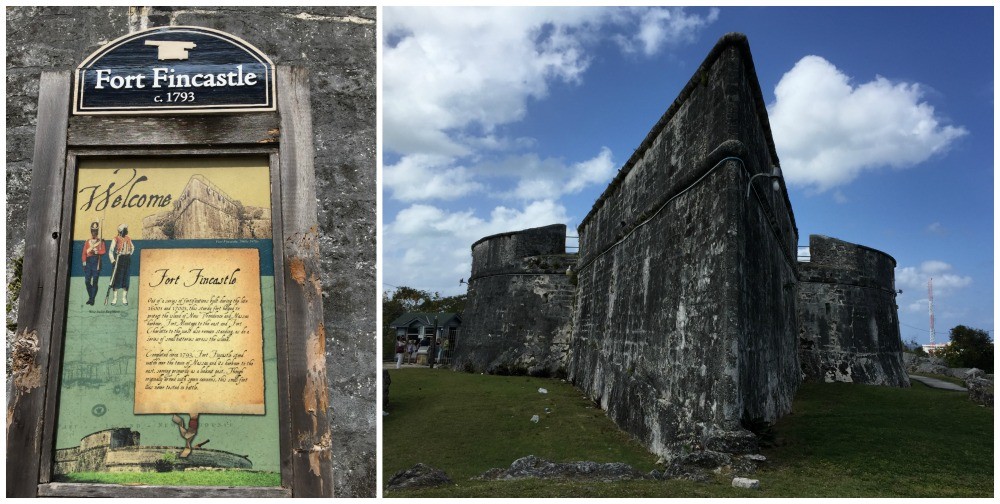 The views from here which is the highest spot in Nassau are ok. You can just see the port and in the distance Atlantis. There are a few stalls along the roadside as well. 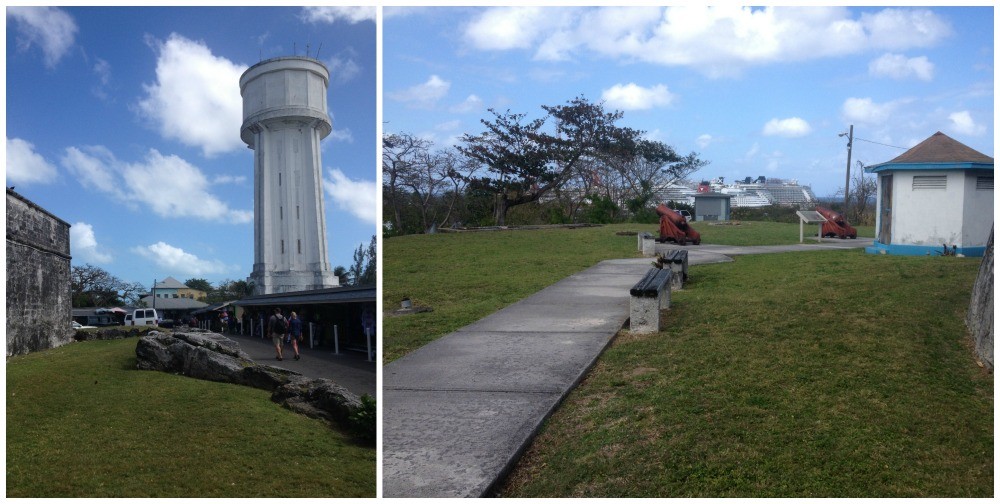 Views to the port from Fort Fincastle

From here we drove to Paradise island which you get to via the Sidney Poitier bridge. The biggest attraction on Paradise island is the 2 Billion dollar Atlantis resort, not that we got to see much of it as we only had 30 minutes here, just enough time to walk in a quick look at the casino and a few shops without getting lost. 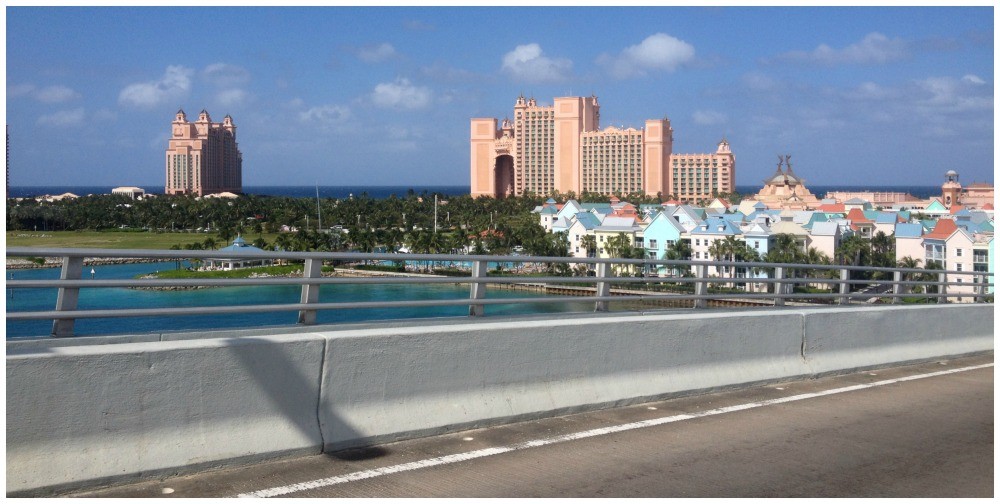 The bridge to Paradise Island and Atlantis

Atlantis resort in the Bahamas

To appreciate and see more of what the Atlantis resort can offer you need to buy a day pass, or better still stay here for a couple of night which is what we did in the sister Atlantis resort in Dubai. 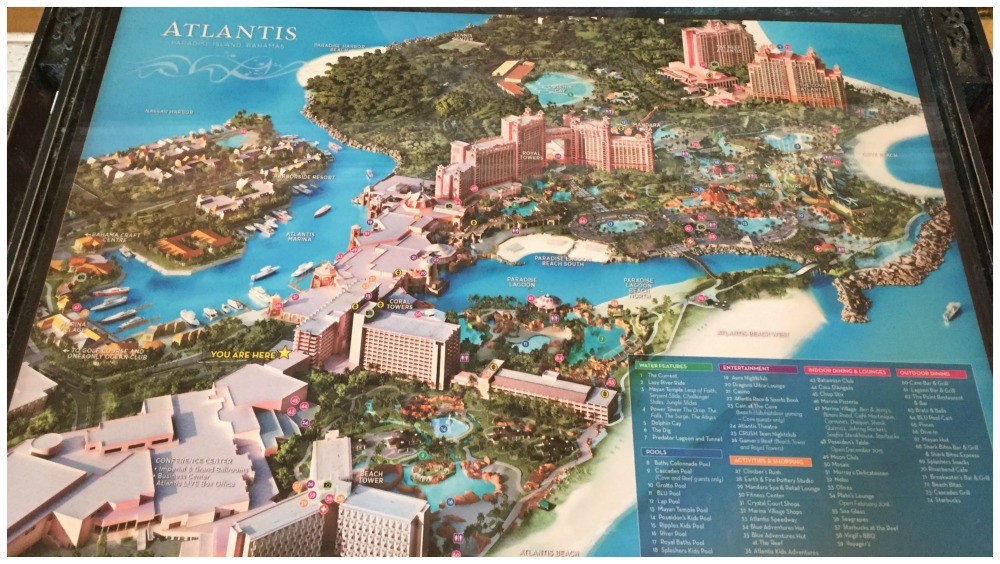 Atlantis on Nassau the Bahamas

Also on Paradise island is the popular Cabbage Beach and this was our next stop (only for a look, no time to stay) It’s a strange entry to the beach, from the road through a very high wire fence and gate up a short walk to the beach.

To our surprise it was not that busy, maybe most people had already been and gone who knows.

One thing for sure though, this is a long beach and the surf is tough here, not ideal for families with small kids in that water. 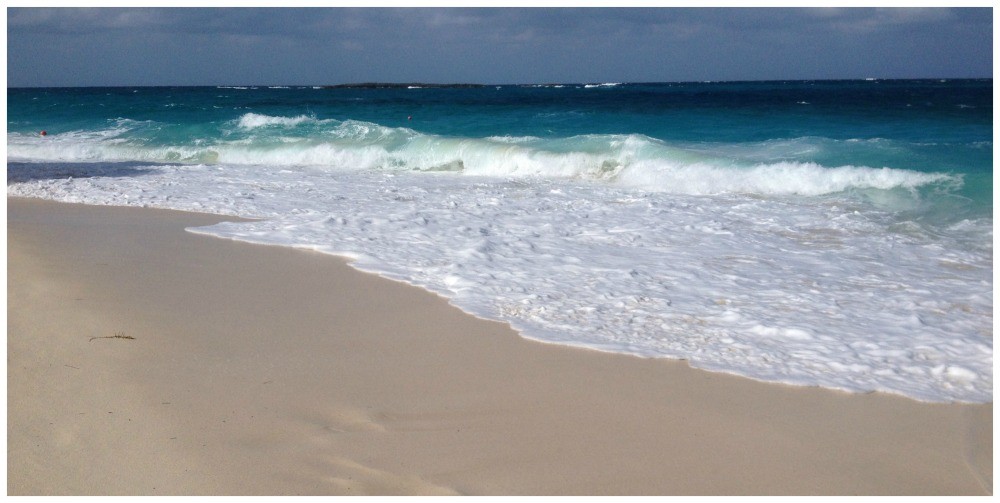 The driver then took us back to the port through the streets of Nassau, dropping us of near the Nassau Straw markets.

Colourful Nassau in the Bahamas

We had some time looking around the items for sale. Most of the stuff in each stall is very similar with some hand-made artifacts as well. 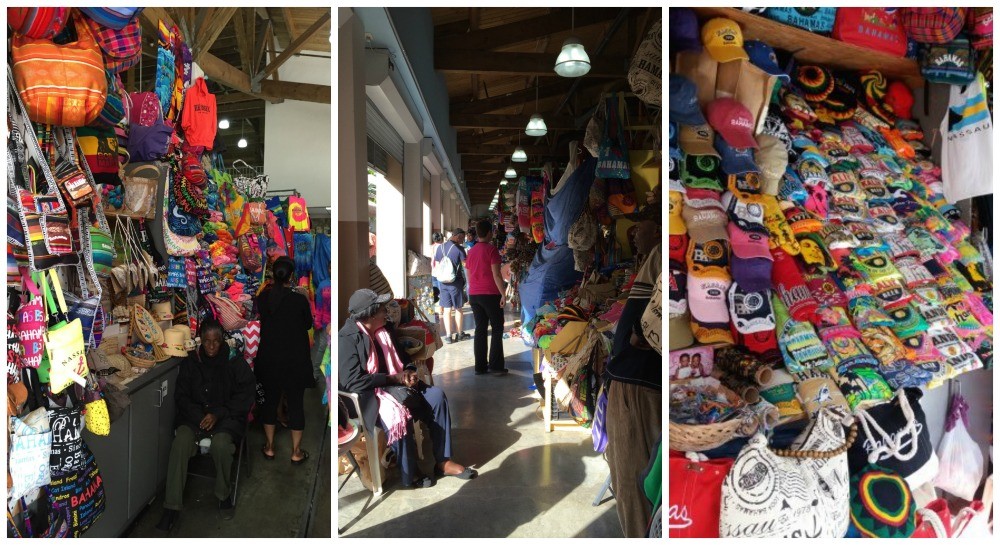 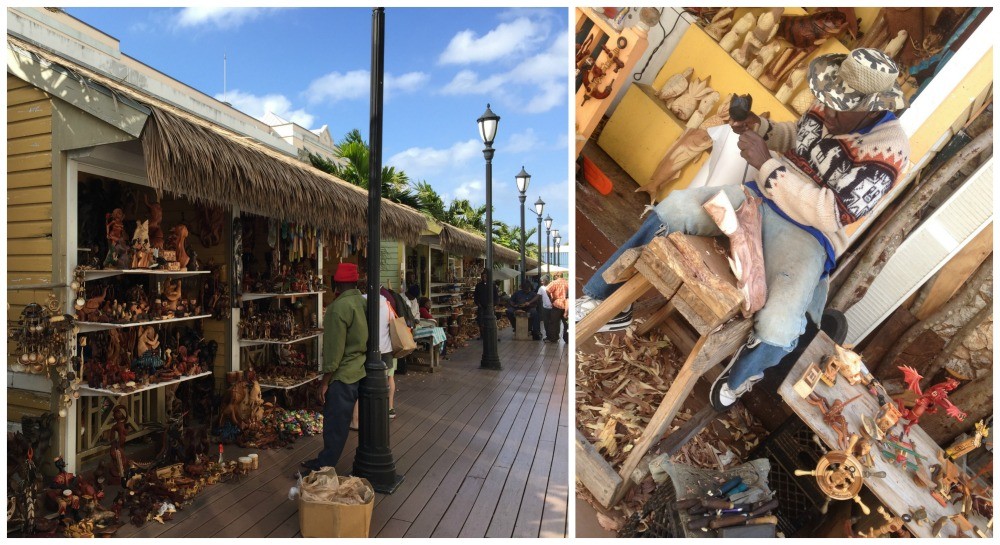 Wooden hand crafted items at the Straw market in Nassau

Considering that there were five cruise ships in the port of Nassau today it didn’t feel like it was really crowded, the traffic was very heavy going though.

From the Straw market it was only a short walk back to the ship.

We departed Nassau at just after 7pm. 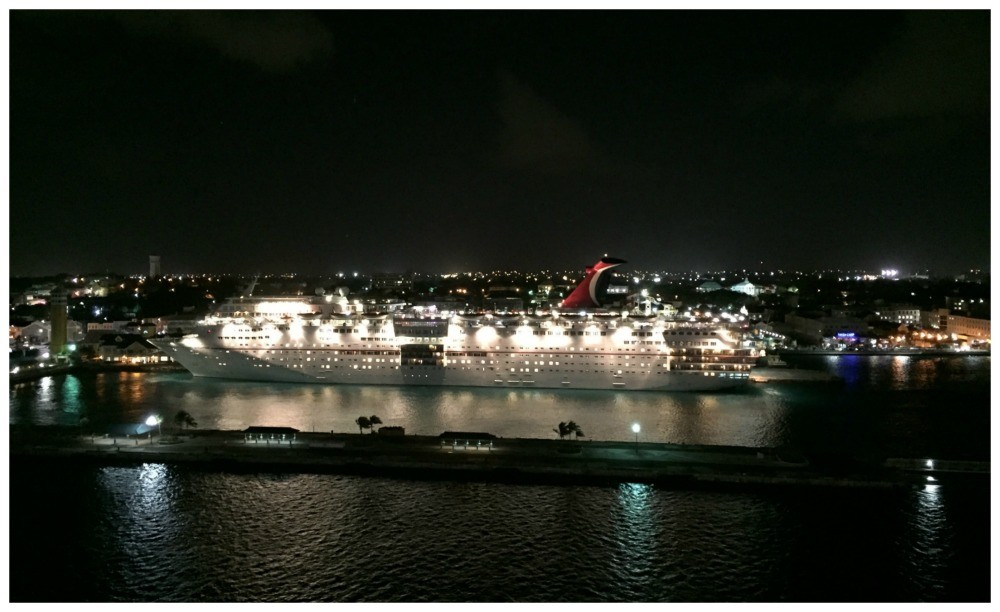 Carnival ship lit up at night as we leave Nassau