Well this is the morning of day 7 so we should be just over half way to Southampton and the map on the Navigation channel shows us where we are. That little red triangle in a circle is us… 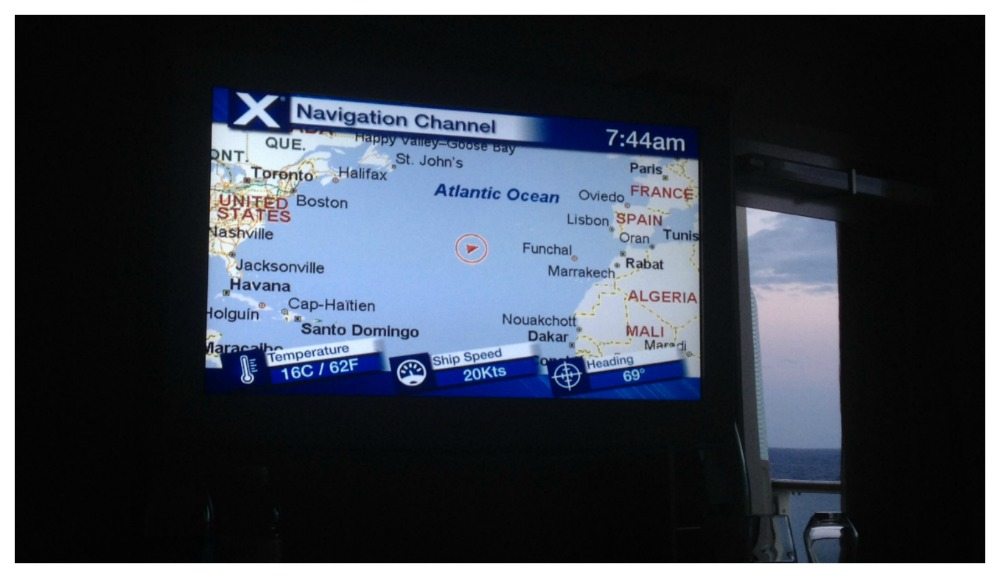 Somewhere in the great outdoors

What shall we do today? 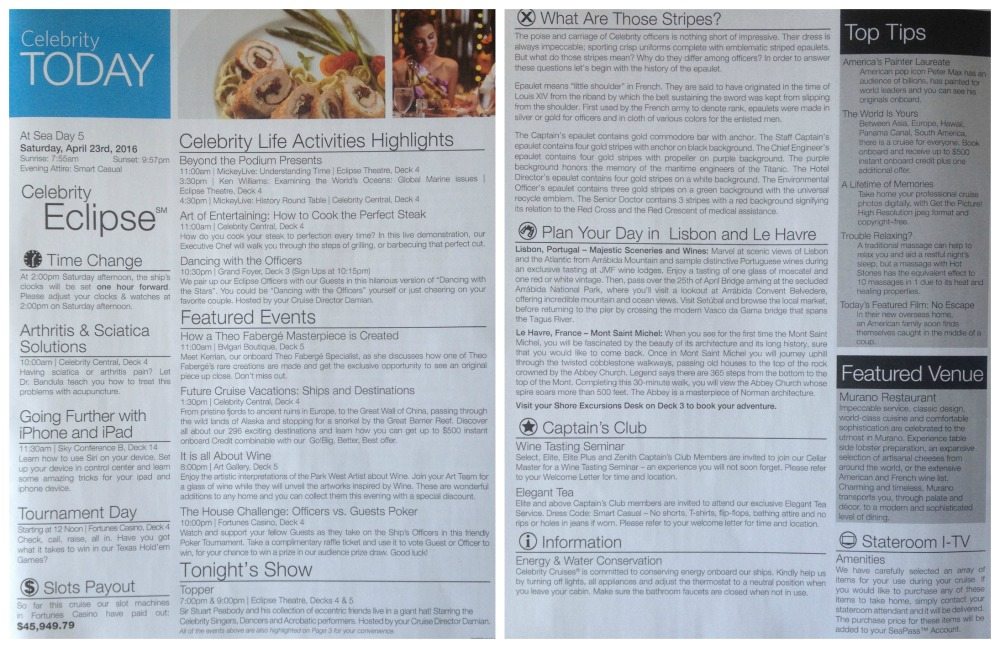 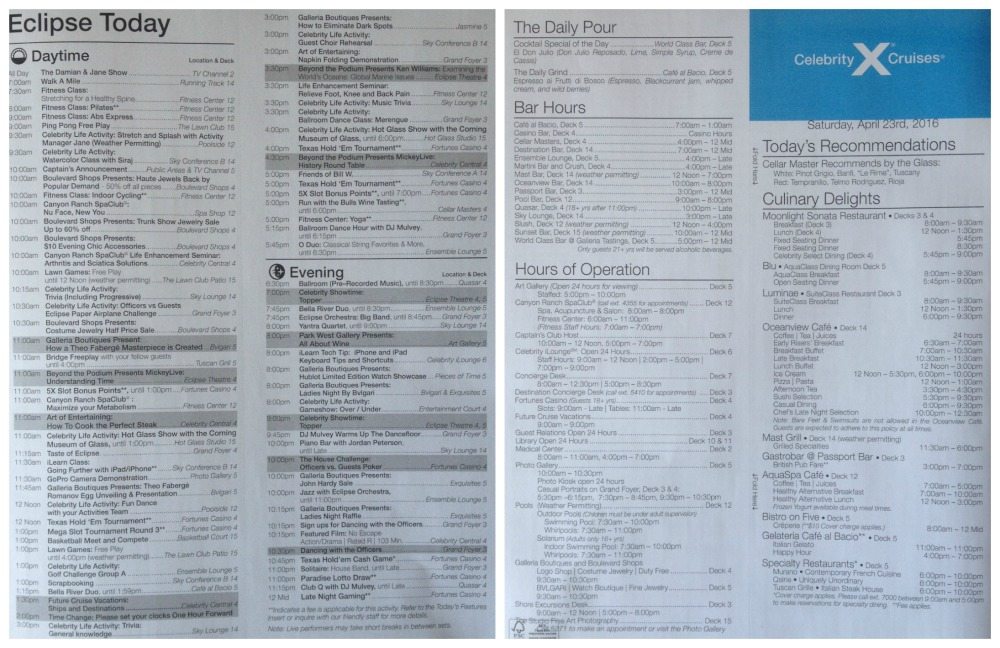 While waiting for my morning smoothie order (the Aqua Spa cafe was busier than normal) I checked out the Spa which is on the same deck just across the hallway.

The Spa is on two levels with some treatment rooms below. I did pass the hair salon on the way to the gym which they call the Fitness Center. 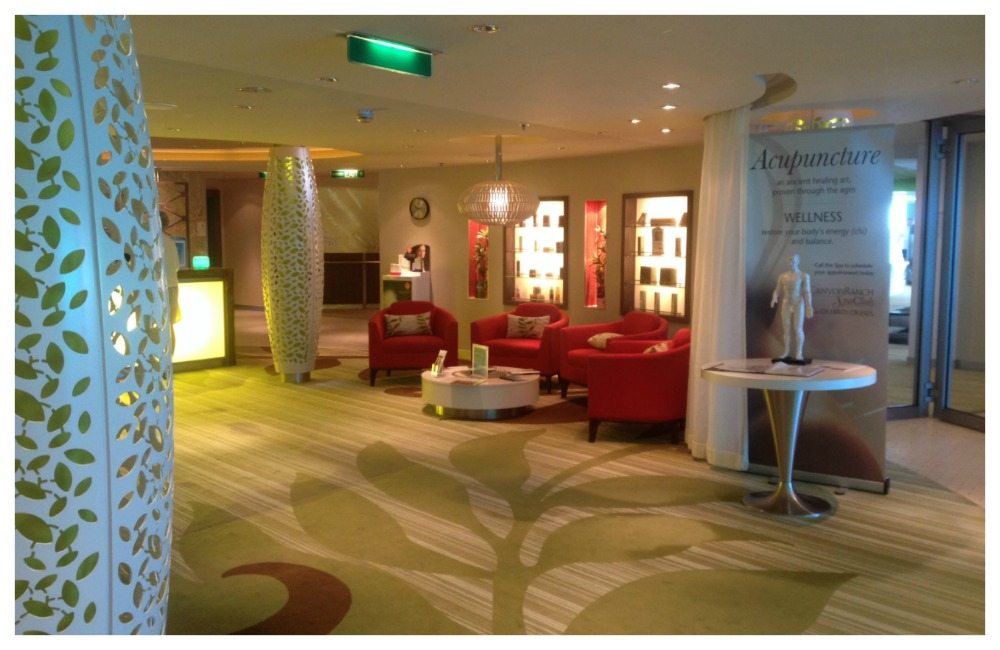 Even though I mentioned earlier in my review how wonderful it is to have a bar or lounge that takes in the panoramic views that are so often used for the gym & spa’s on other ships… well, this gym still has awesome views (well-done Celebrity) I didn’t notice many mirrors that often clad the walls of gym’s, I guess the view out the windows is much better anyway, cos why would you be going to the gym!! 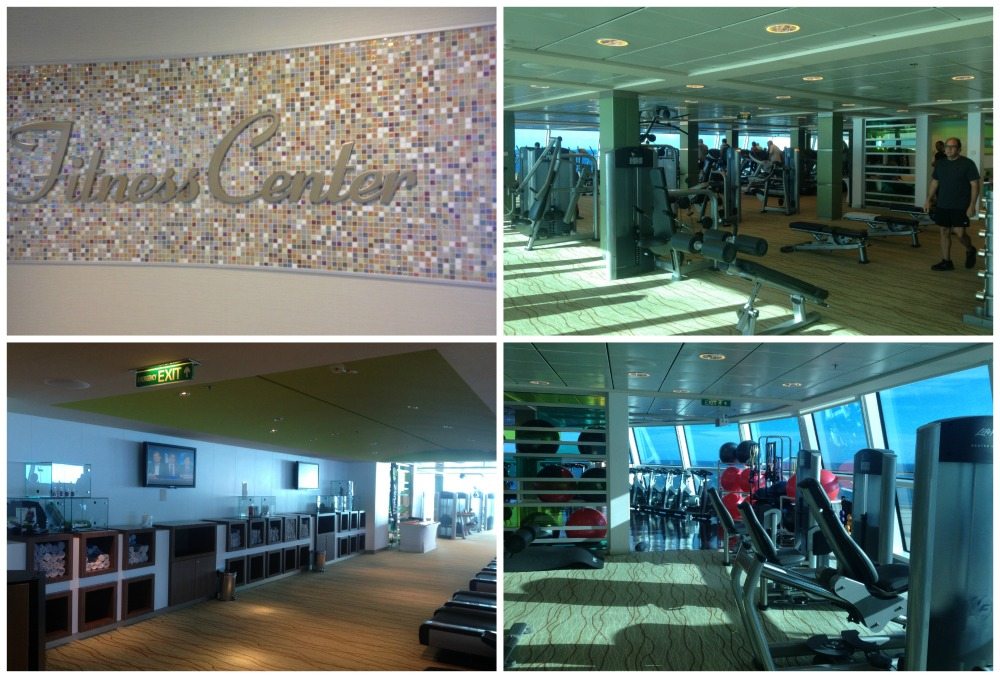 At 10.30am there was another presentation from the Beyond the Podium speakers, Mickey Live talking on the topic of ‘Time’.

Mickey is that guy with all the gadgets… you name it, he’s got it. Wanna know when we crossed the exact half way point he can tell you, wanna know how close to the Bermuda Triangle we were, Mickey can tell you.

Mickey Live presentation on the topic of ‘Time’

Next was time for lunch, this was my choice from the buffet. It may not look all that perfect, but believe me when you see what some people pile up on their plates, this is beautiful. 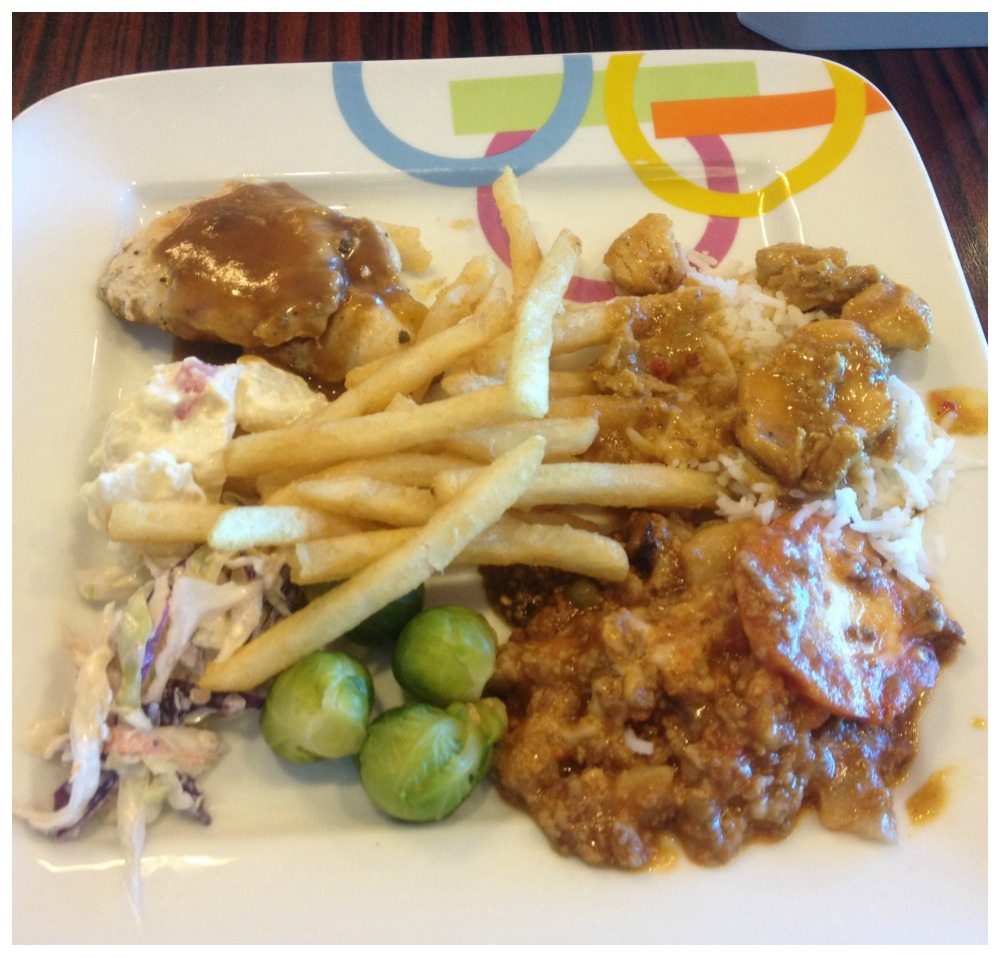 Lunch from the buffet 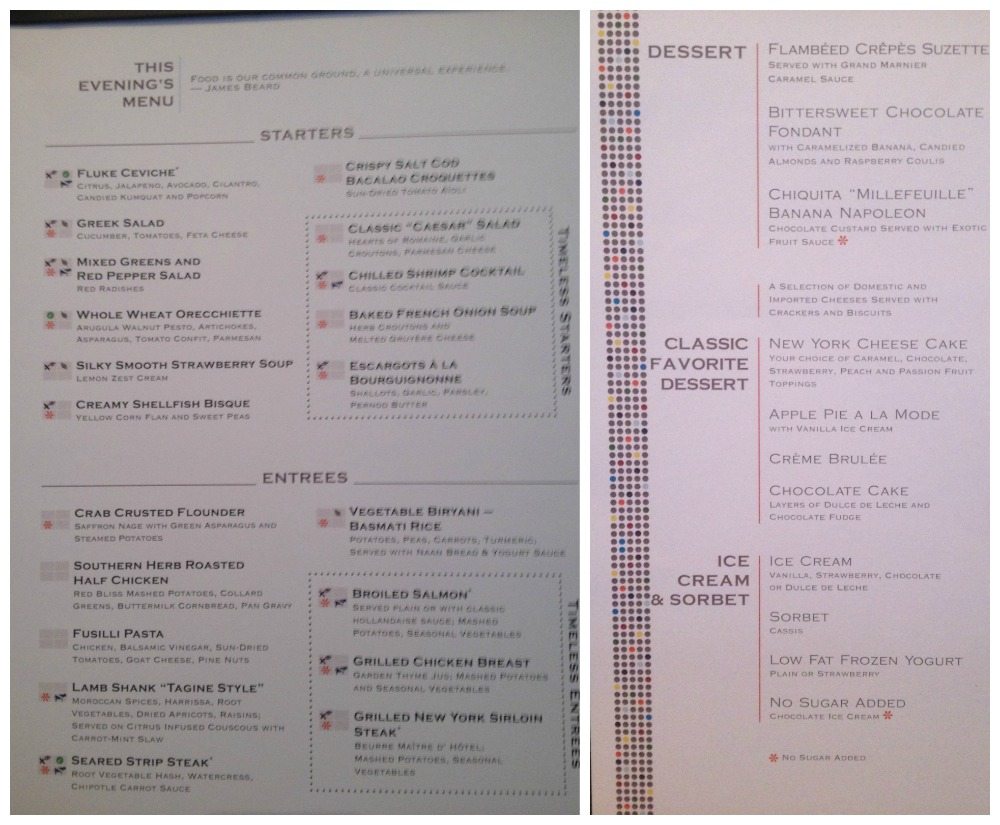 Tonight’s menu in the dining room on Celebrity Eclipse

Selection of our starters

I had the Grilled New York Sirloin Steak from the Timeless entrees while Moni enjoyed the Vegetable Biryani Basmati Rice.

For dessert we chose the Chiquita Millefeuille Banana Napoleon (what a name) and the Bittersweet Chocolate Fondant. Both were very nice.

Tonight’s show was the second of the major productions from the cast of the Eclipse. Called ‘Topper’ and it all revolves around a top hat.

By the way, unlike most ship productions that you are not allowed to record or photograph, Celebrity actually encourage you to take photos and even record any of the show and then share it on social media.

The costumes and quality of singing and performing was very good. The entire cast had great voices and the sound quality was great.

Dancing with the officers

To top off the evening’s entertainment, in the Lobby was a dancing with the officers competition. We watched from the al Bacio balcony once the crowd started laughing and clapping, we had to see what was creating such a commotion.

It was really funny and the event had lots of people clapping and cheering for their favourite pair. I hope that no one recorded some of what we saw so that what happens on a ship stays on the ship… less said the better. 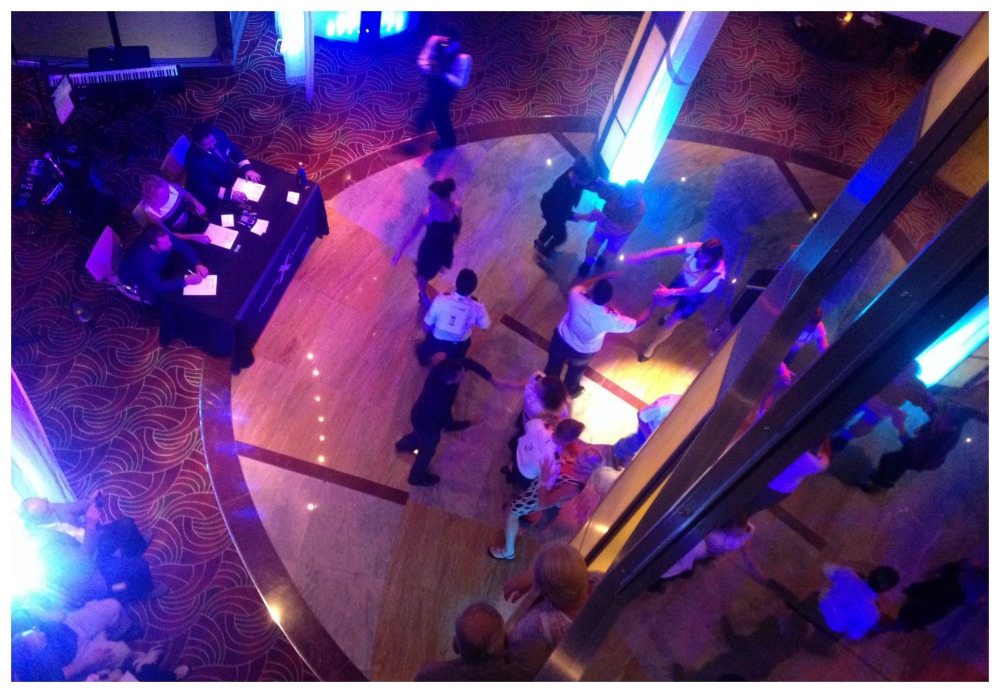 Dancing with the officers in the Lobby

Back to finish our drinks and then off to bed.

Another wonderful day at sea, check out what’s going on in the Celebrity Today paper. 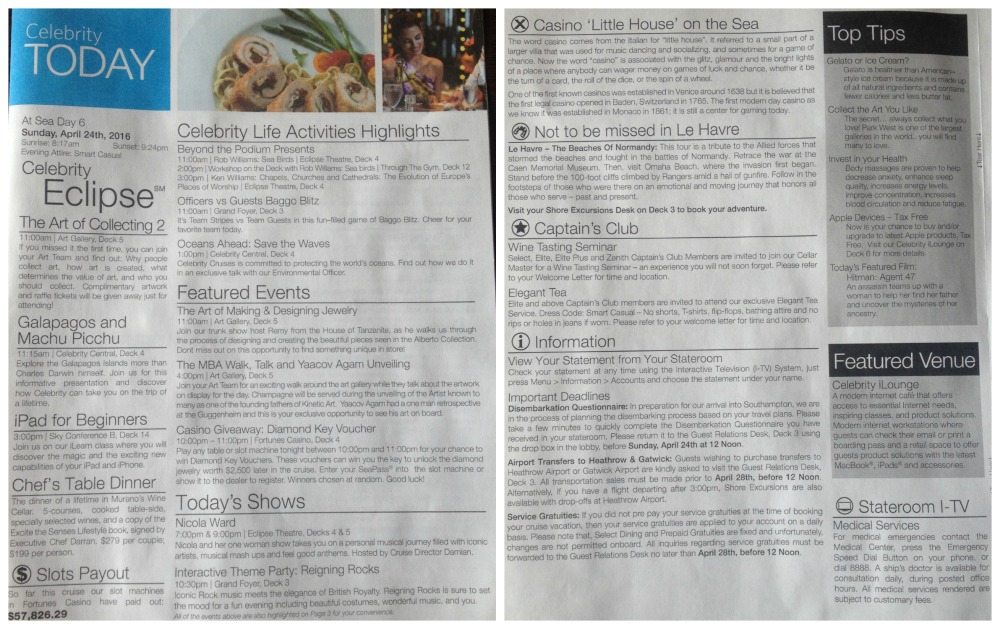 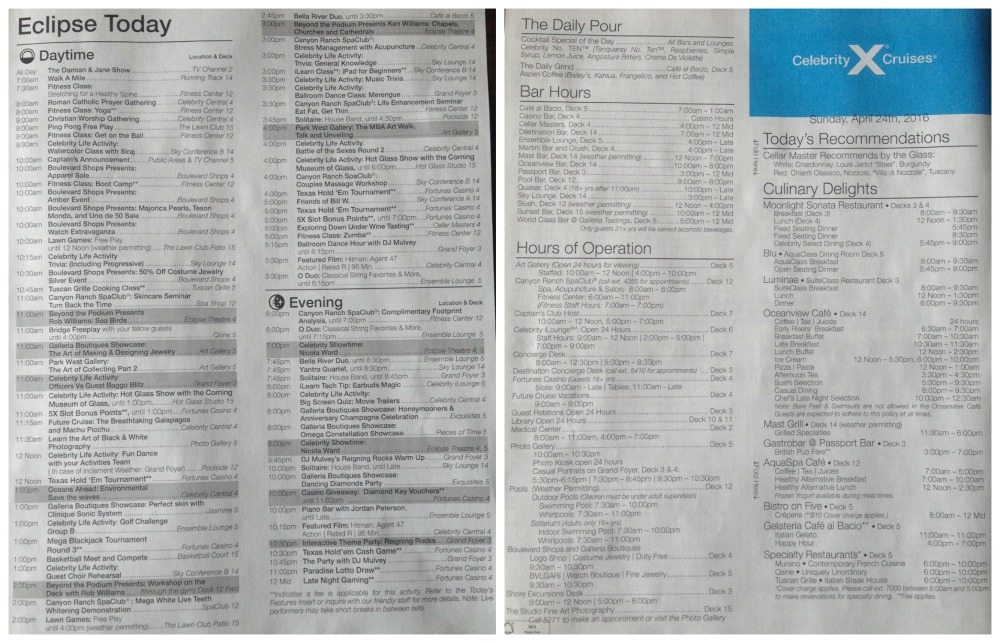 We had a pretty usual morning before heading to the Moonlight Sonata for lunch. I wanted to go to the restaurant for a change. 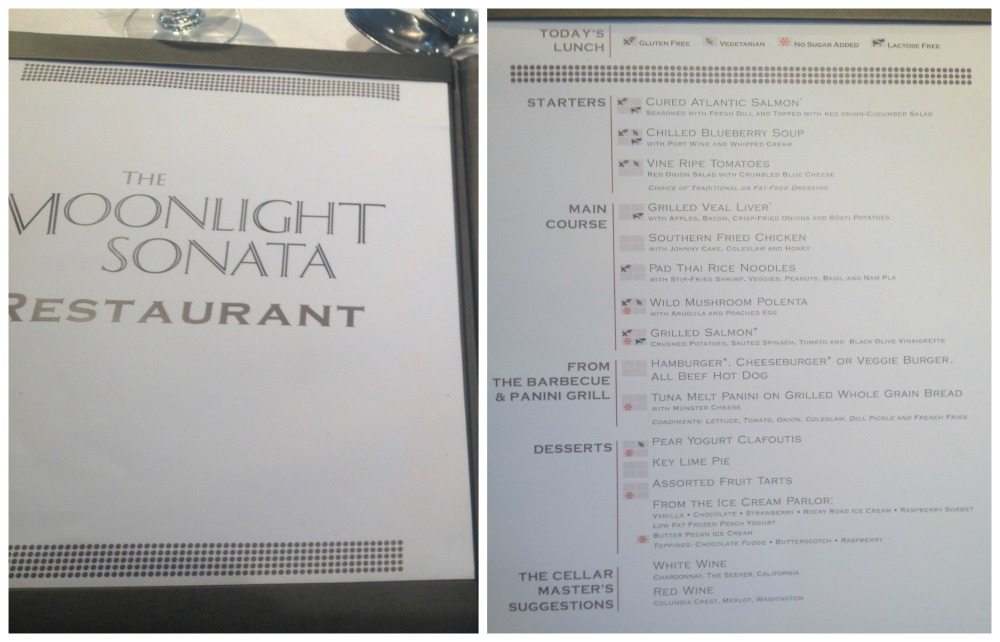 We where sat right at the very back near to the waiters station on the top-level of the dining room. The bottom serves breakfast & dinner while the top does lunch and anytime dinner dining.

It was a bit noisy from the clanging of plates etc but apart from that it was fine.

These were our meals of choice from the lunch menu.

Vine Ripe Tomatoes and Cured Atlantic Salmon to start, followed by Grilled Salmon and Wild Mushroom Polenta, for dessert I had Key Lime Pie. All the meals were very nice as you’d expect.

The only thing with dining in the restaurant for lunch is you can hit n miss with your table guests, plus it generally takes longer than self-serve from the buffet, if these two things are not a worry to you then it’s definitely your place for lunch. 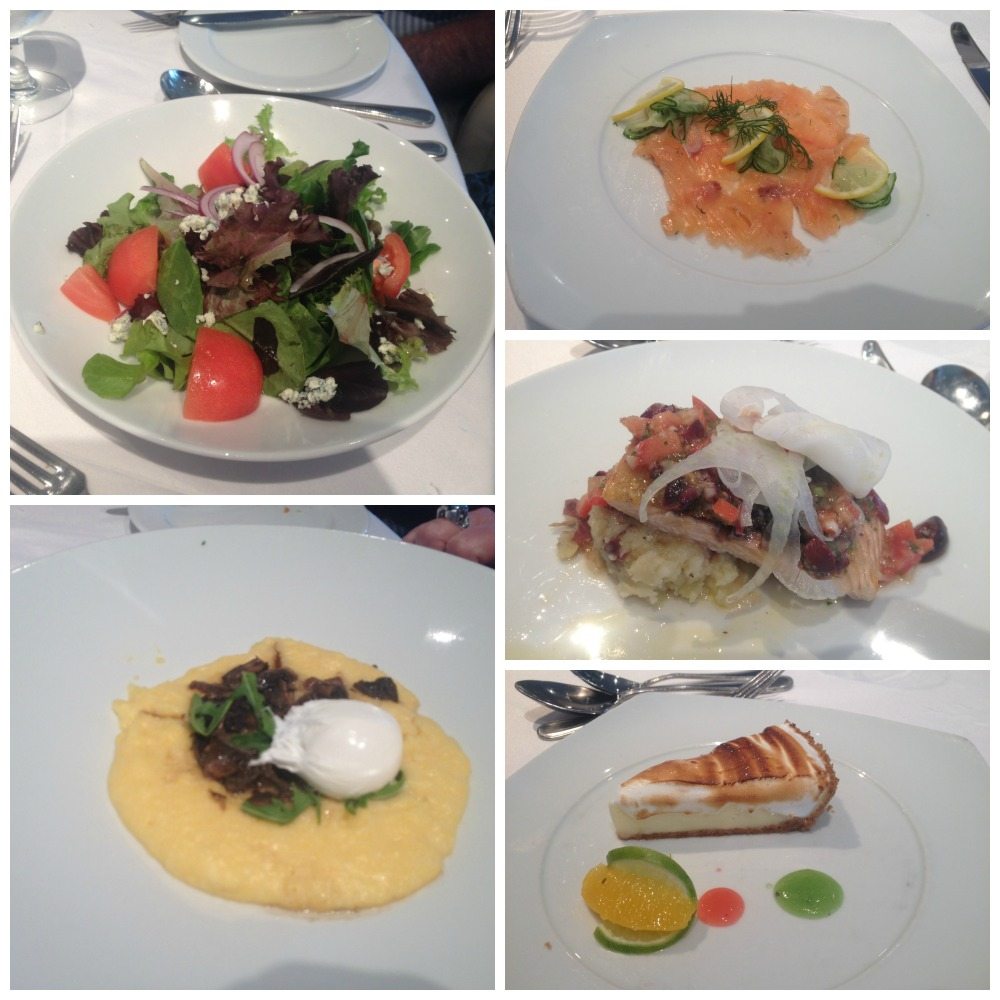 We played a few ends of bocce on the lawn and noticed the gardener had a bag of seed and some turf ready for repairing the od spots. Boules was fun at sea which was another first for us. 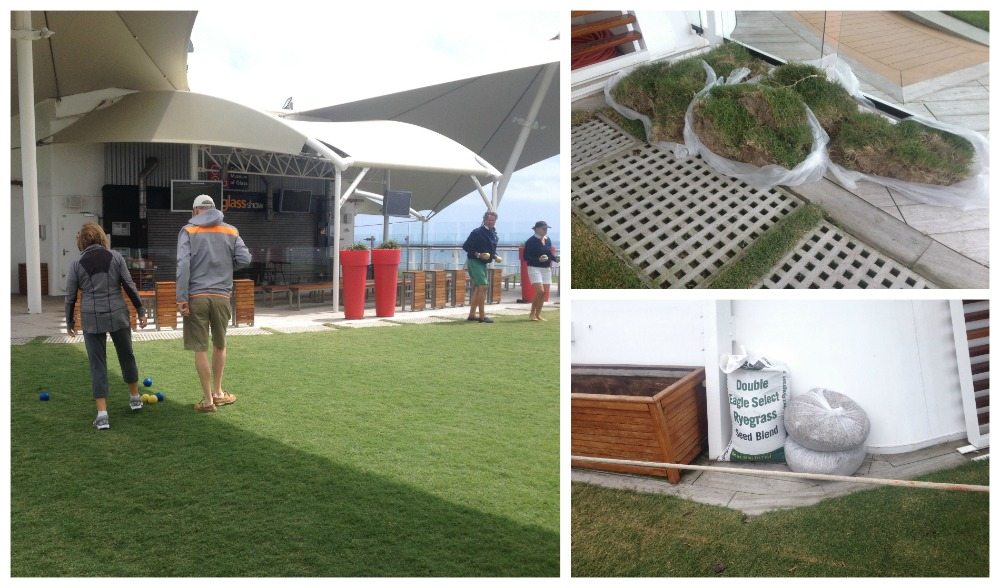 Games on the lawn and seeds and turf ready for repair

Time for a coffee

with cake and some background music. 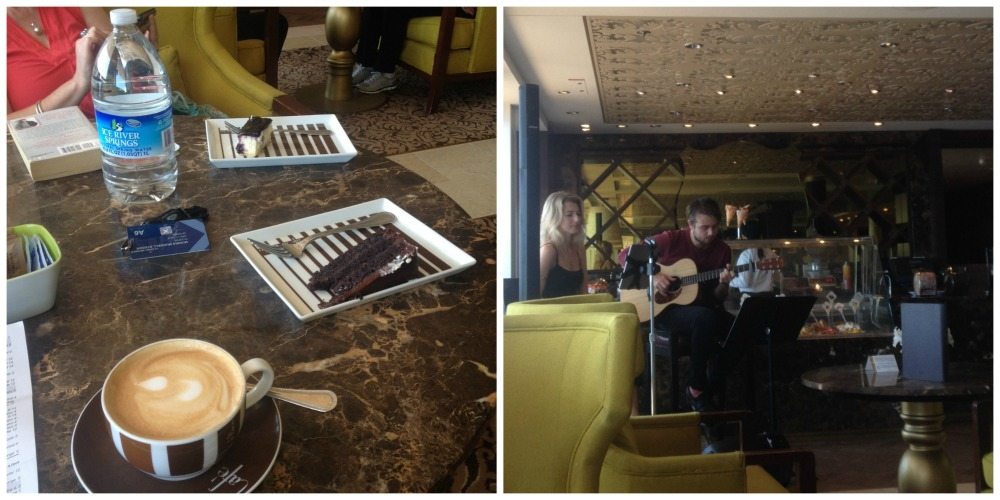 As I mentioned at the beginning of the day, we were going to make a brief unscheduled stop at Ponta Delgada in the Azores. We had actually found out a few nights ago from a lady who we sat next to in the cafe.

We asked her how she was enjoying her cruise and then we found out… She was doing ok which was a bit of a surprise, but then she went on to tell the story of her friend whom she was traveling with. Well it turns out that her friend (80 who gets around in a wheelchair) tried to get up from her bed onto the wheelchair and as the ship moved, so did the chair and she landed on the floor breaking her hip.

The medical crew has been looking after her very well and all was fine until she started some internal bleeding and then needed some extra 0- blood (which the crew announced over the loud speakers). They had over 20 people turn up to give blood and even more they turned away. From those that turned up they had plenty. It was then decided that they needed to make a medical evacuation (too long to wait for her hometown Southampton) and as she was too unstable for an airlift, they would need to find the nearest port and here we are. 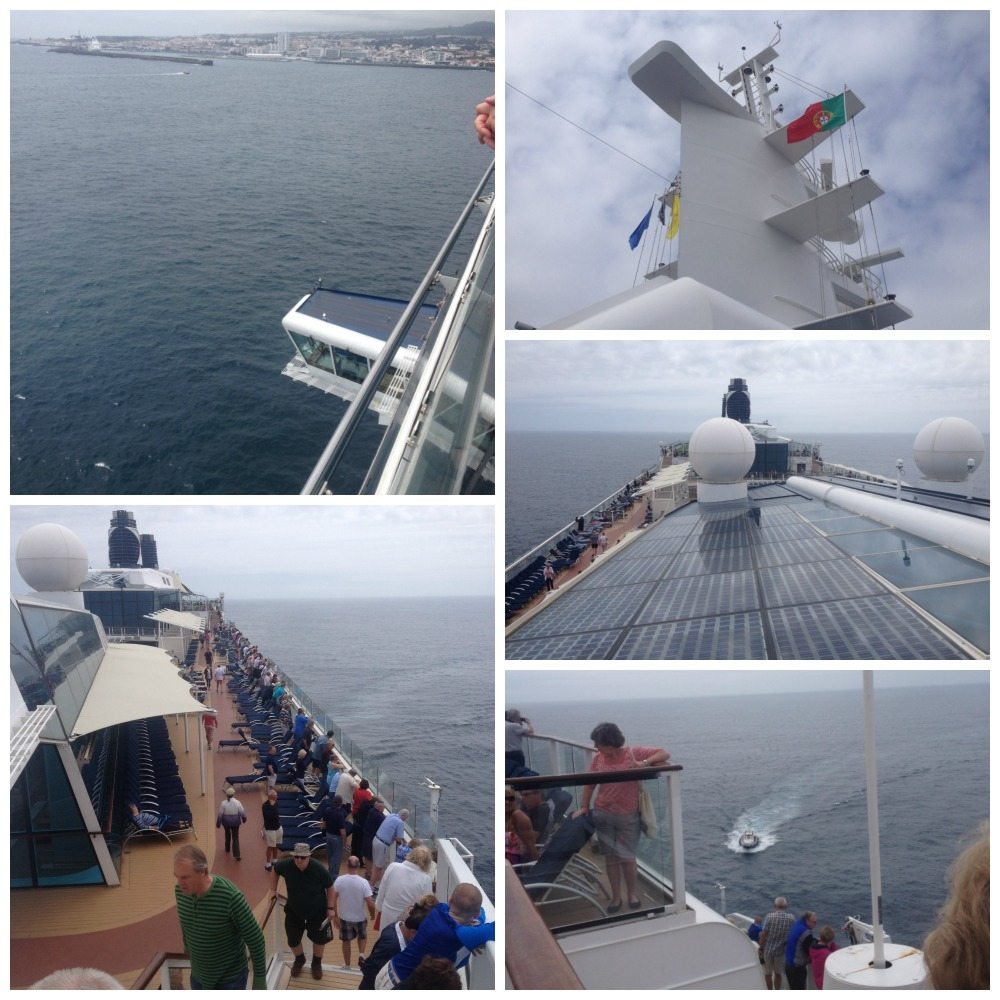 An unscheduled stop in the Azores 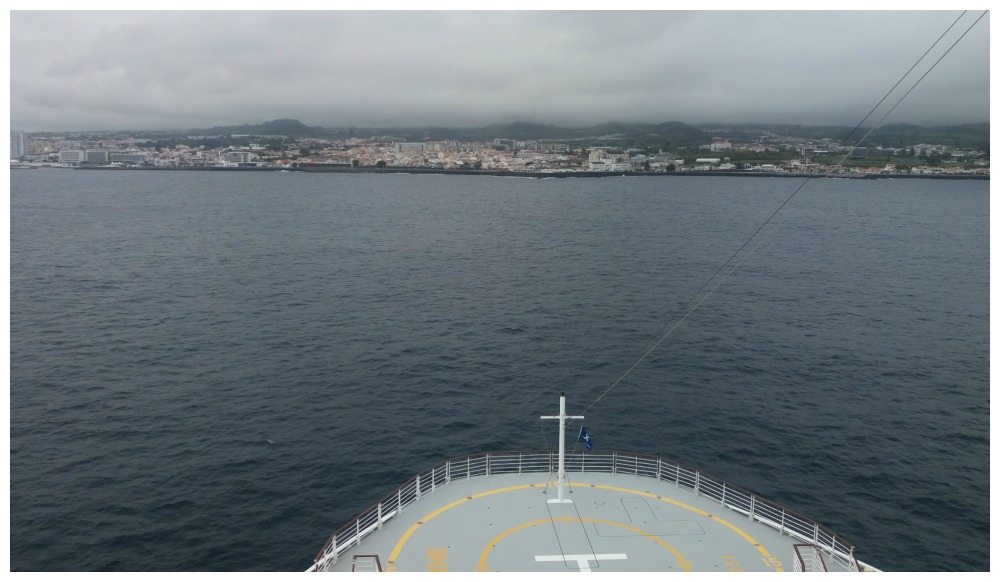 First sight of land since the Bahamas 7 days ago

The ambulance was waiting at the pier and as soon as the Eclipse was secure enough they off loaded the lady and her friend (carer) into the ambulance and off it drove, the captain sounded the ships horn a few times to send her off before leaving ourselves. We were alongside no more than 10 minutes.

The ambulance ready at the pier

The port of São Miguel island in the Azores, Portugal 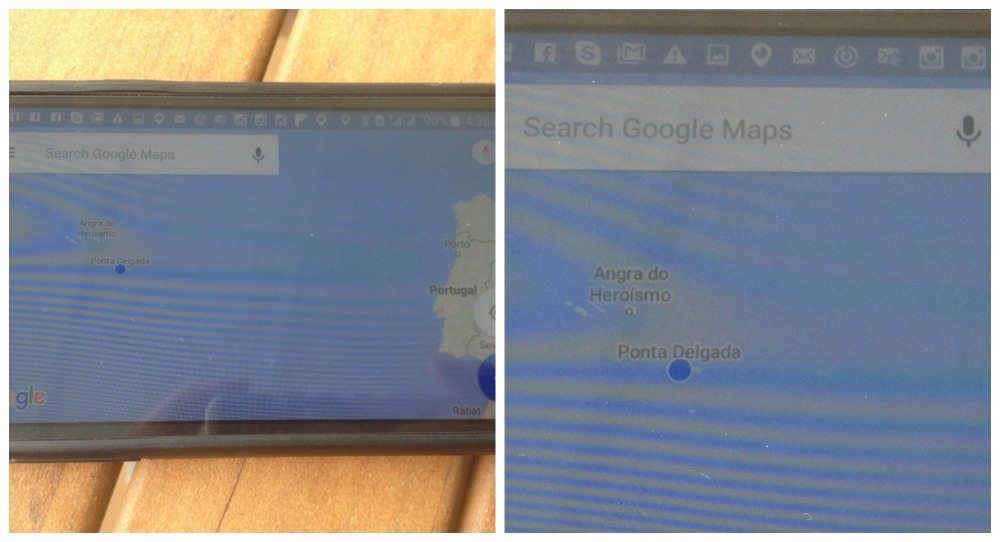 Google search shows exactly where we are

After all that excitement it was time for dinner 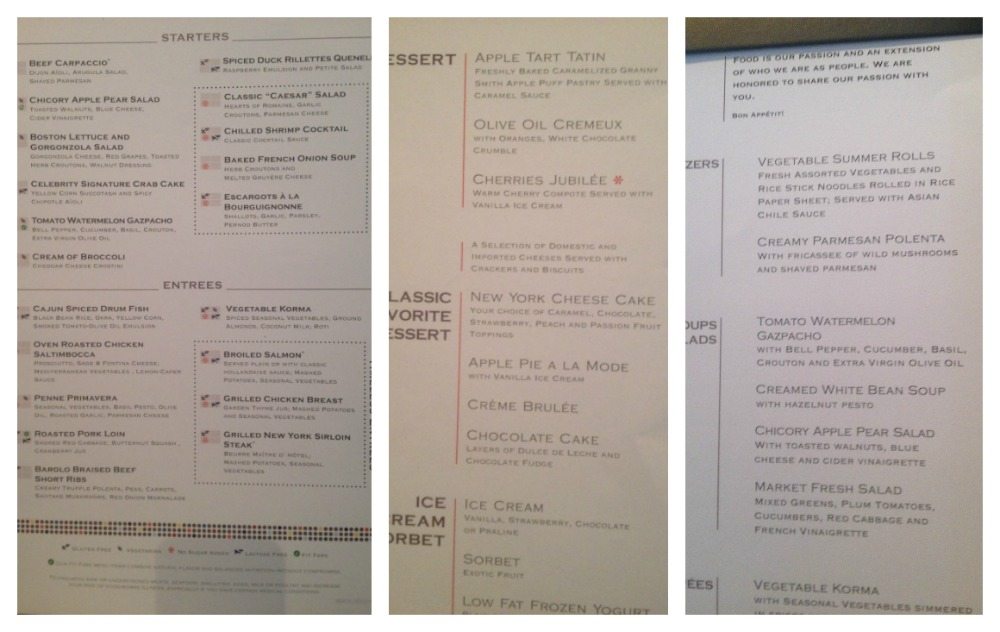 These were our starters this evening, Creamy Parmesan Polenta for Moni, and Beef Carpaccio, Spiced Duck Rillettes Quenelle for myself. All three were yummy meals.

For dessert we tried the Cherries Jubilee and the Olive Oil Cremeux, both of which were again very nice.

Desserts from this evening

That was it for today, as always we’d love to hear from you in the comments below. Tell us what you think. How was your last cruise? Does Celebrity look like a cruise line for you?