We excused ourselves this morning and enjoyed a bit of a sleep in. It was gone 1am by the time we got to bed, adding to that, all the days that we’ve put the clocks forward and sleep was catching up with us.

Today’s exciting line up in the Celebrity Today paper… 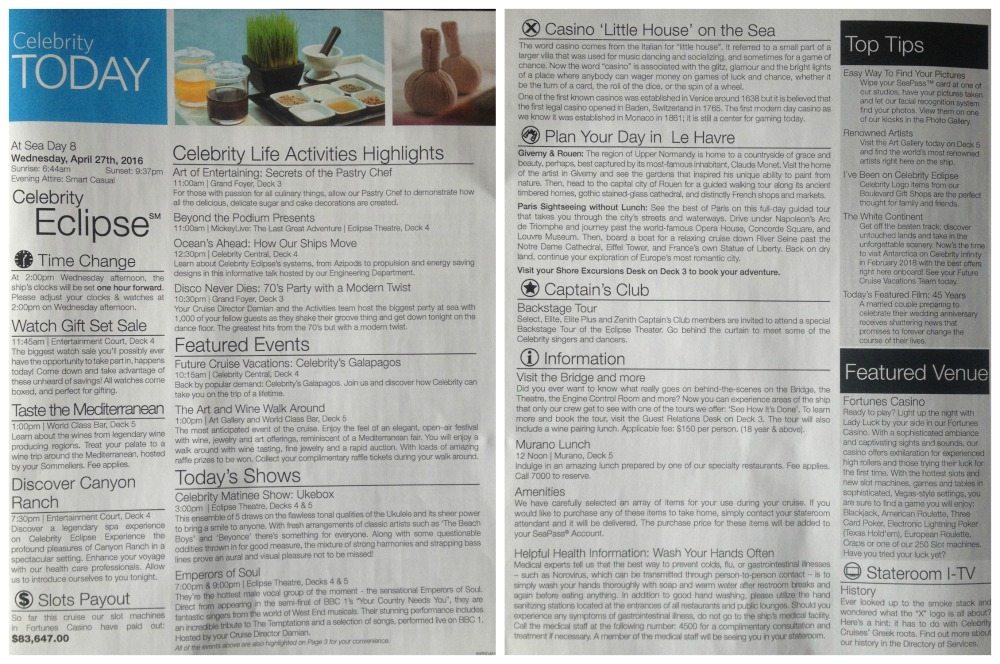 The latest issue of Celebrity Today. 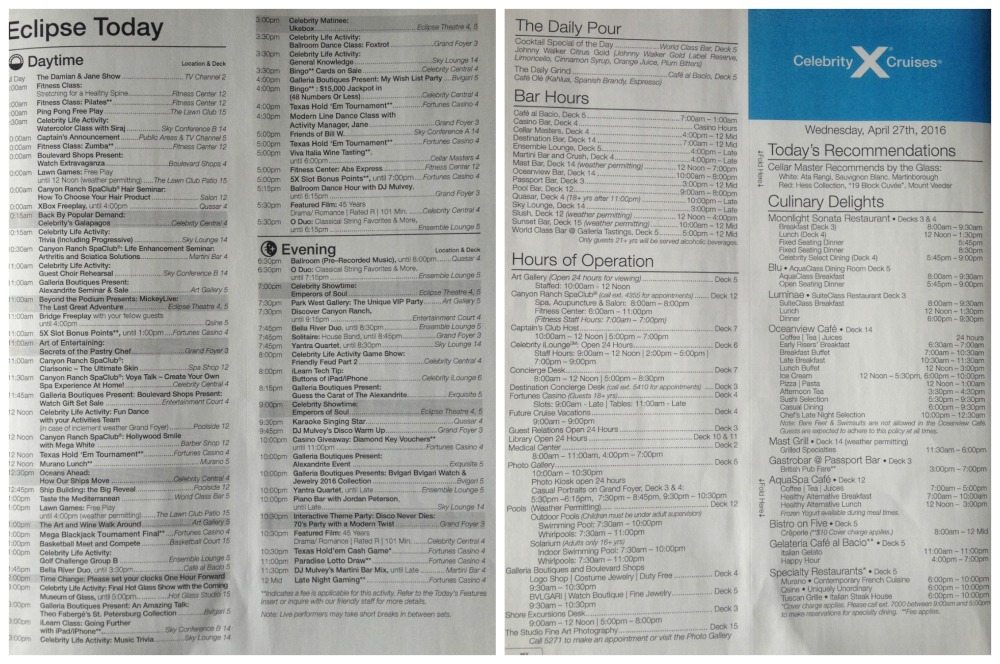 The latest issue of Celebrity Today #2.

We were up and about for the Mickey Live show at 11am. According to Mickey and his GPS team we will have logged another 5,520 miles or 8,884 km or as he calls them ‘Frequent Floater Miles’. One day I’ll need to add up how many FFM we have traveled to date. 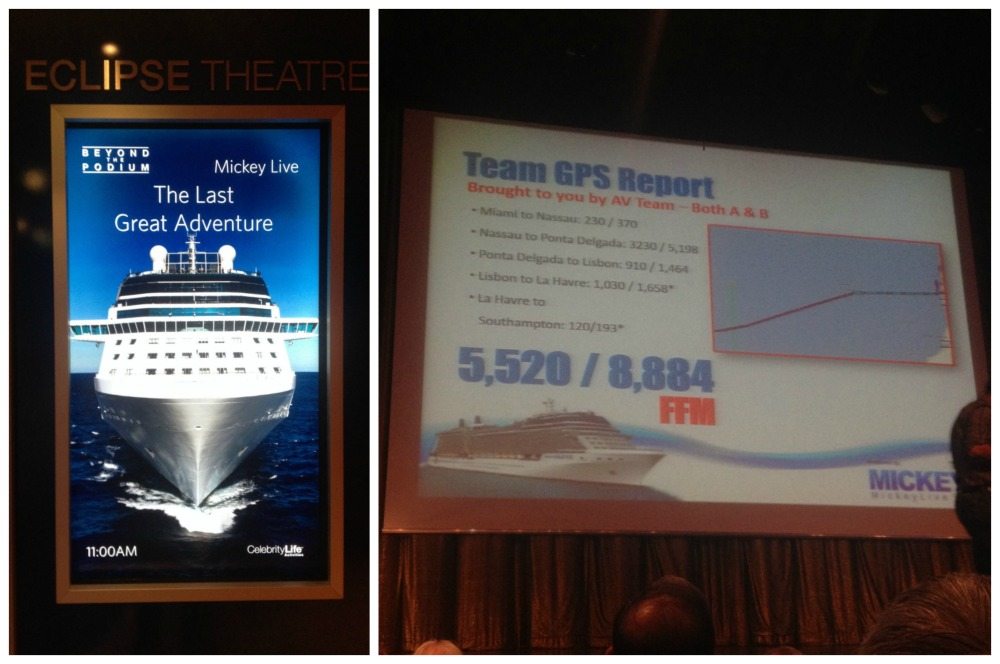 The second shopping frenzy of the cruise (that I saw anyway) at the watch sale in the Entertainment court. 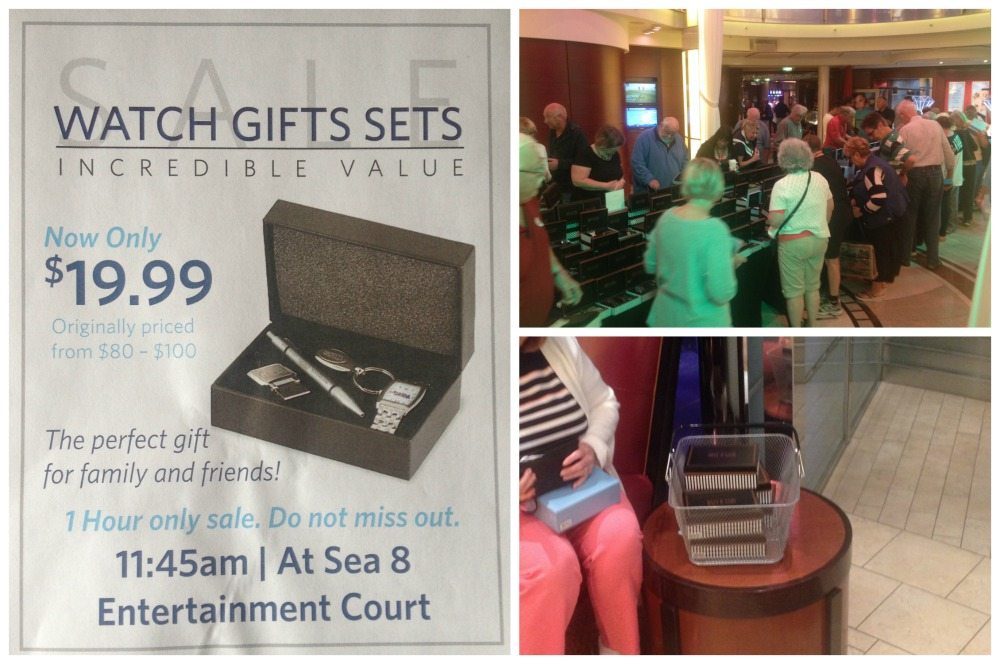 That photo machine was in the entertainment court and you can upload directly to social media from it.

We had to wait for a table in the Café al Bacio or as Mickey calls it ‘his office’ as he spends so much time there. 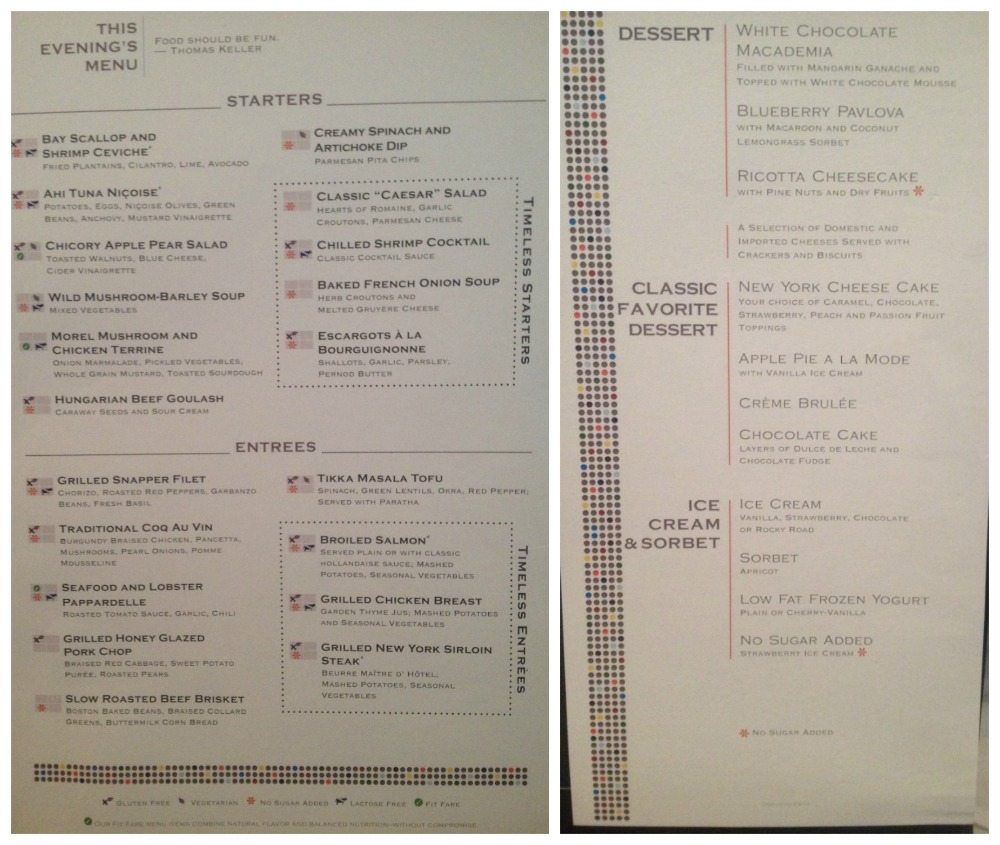 These were my starters tonight as Moni chose all three dishes from the vegetarian menu. I had the Hungarian Beef Goulash followed by Chicory Apple Pear Salad and for my main meal I chose the Grilled Honey Glazed Pork Chop.

My starters and main course in the MDR

The vegetarian choice from Moni was Grilled Vegetable Napoleon, also the Chicory salad followed by the Herb & Garlic Marinated Grilled Portobello Mushroom Arugula-Blue Cheese Salad. The title of that main course took longer to say it than to eat it… hardly a mushroom to find. 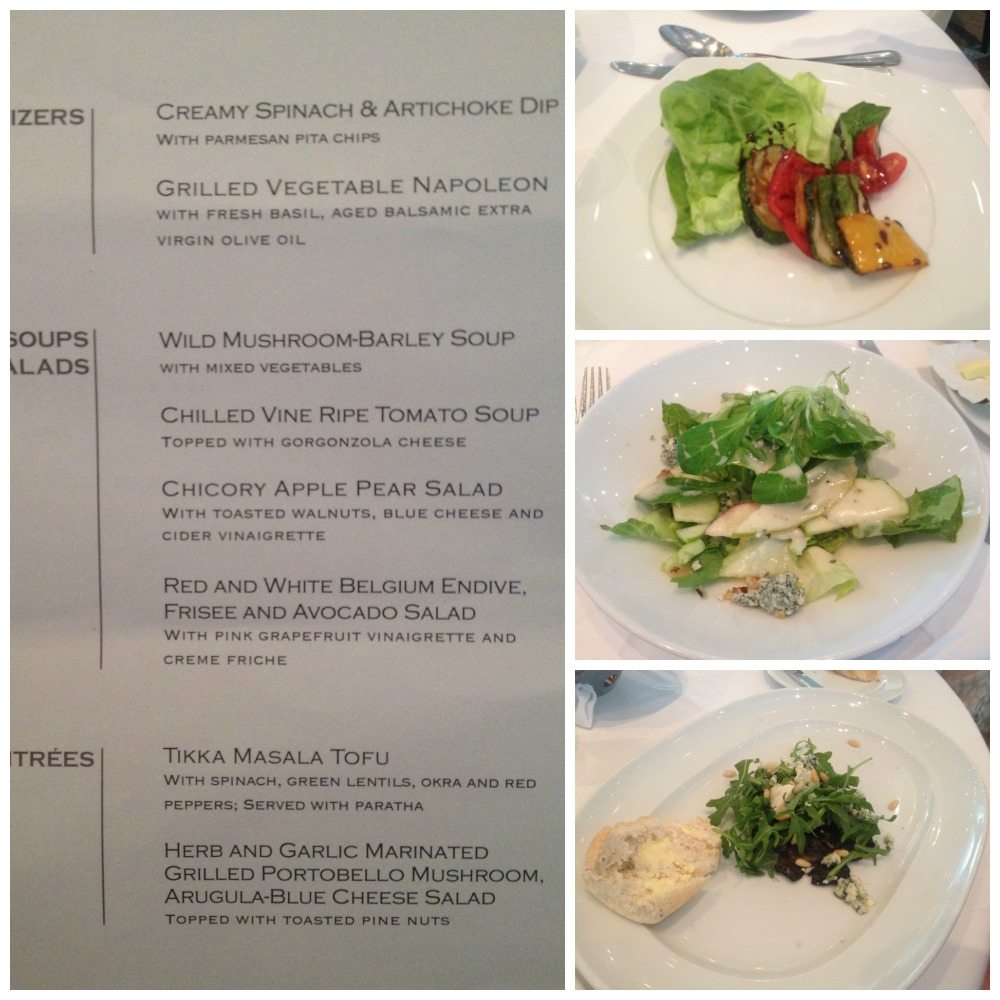 Our desserts were very nice as usual.

Desserts in the MDR on Celebrity Eclipse

A quick stop off in the Sky Lounge, but after ten minutes of no staff around we decided to go to see tonight’s show. 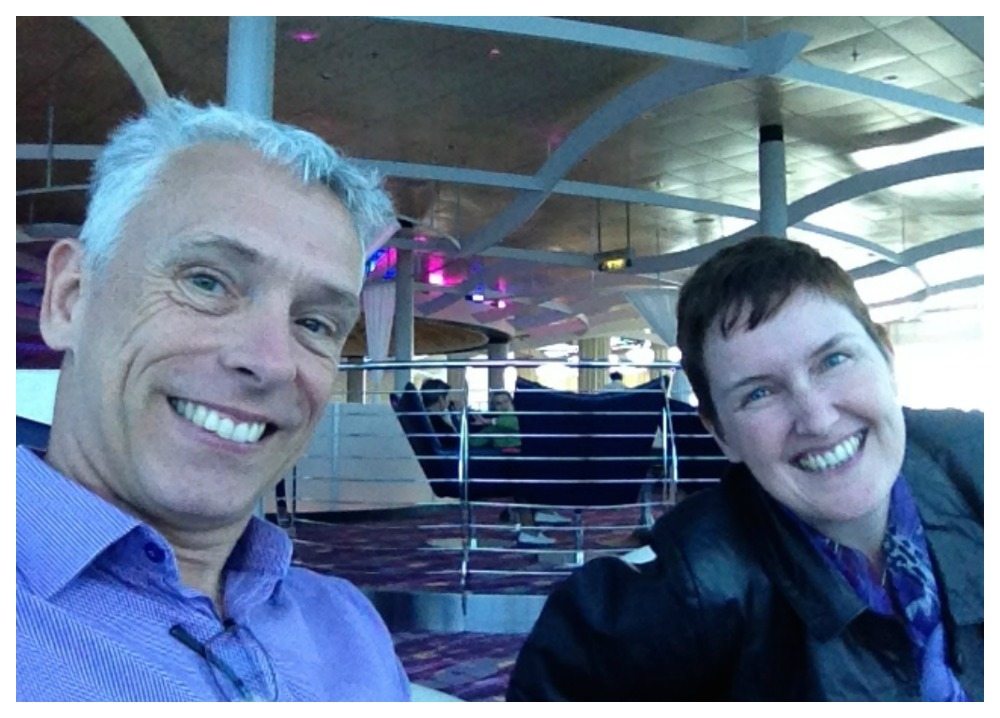 Selfie in the Sky Lounge

Emperors of Soul in the theatre

We were quite early in the theatre and sat in the very front row, which was a first for us. One of our dinner guests said it was great and if he could he’d always sit there. 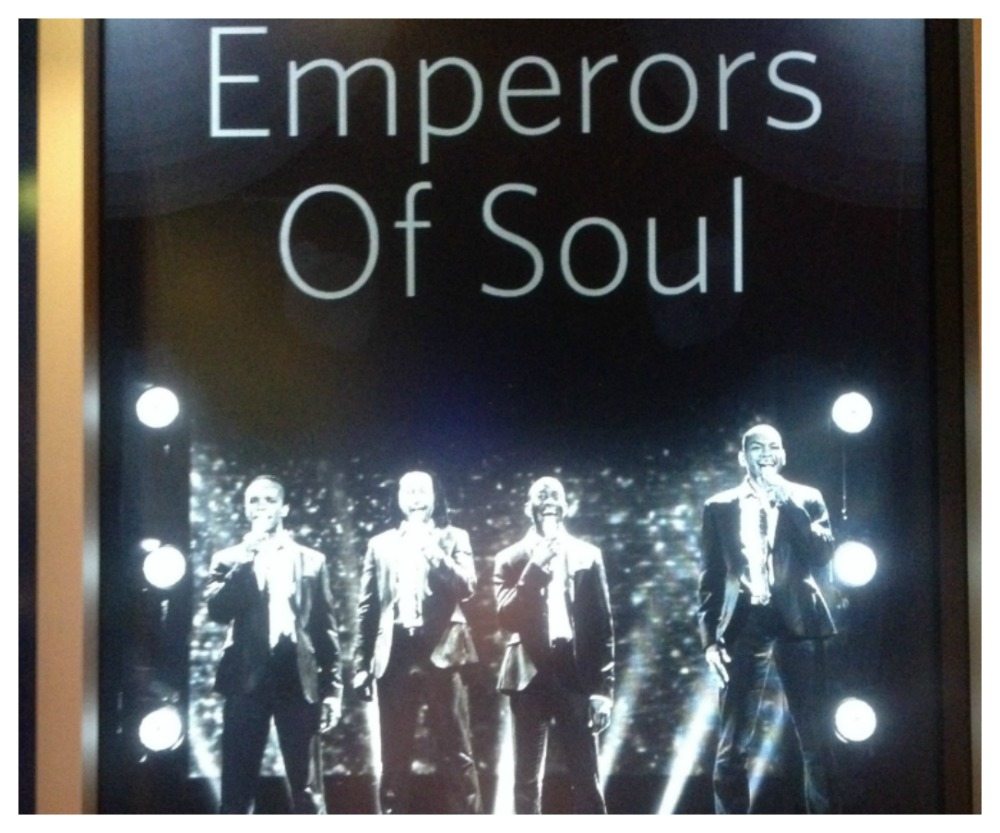 Tonight’s show on the Eclipse, Emperors of Soul

The show was pretty good and after a while the audience warmed up to them. Sat in the front, we or should I say Moni got plenty of attention from the young singers, all in good taste. We both said that even though it was an experience to be up so close, you do tend to sit with your head looking up which after a while is a bit uncomfortable. Tick the box and move on.

The little red light on the phone was flashing… I pressed the message button and listened to the voice that spoke to me. Tomorrow was the day…

Day 12 of our 14 day cruise and it’s a very exciting one for us. Reading the Celebrity Today is not going to list what we got up to today… but I’ll share it with you. 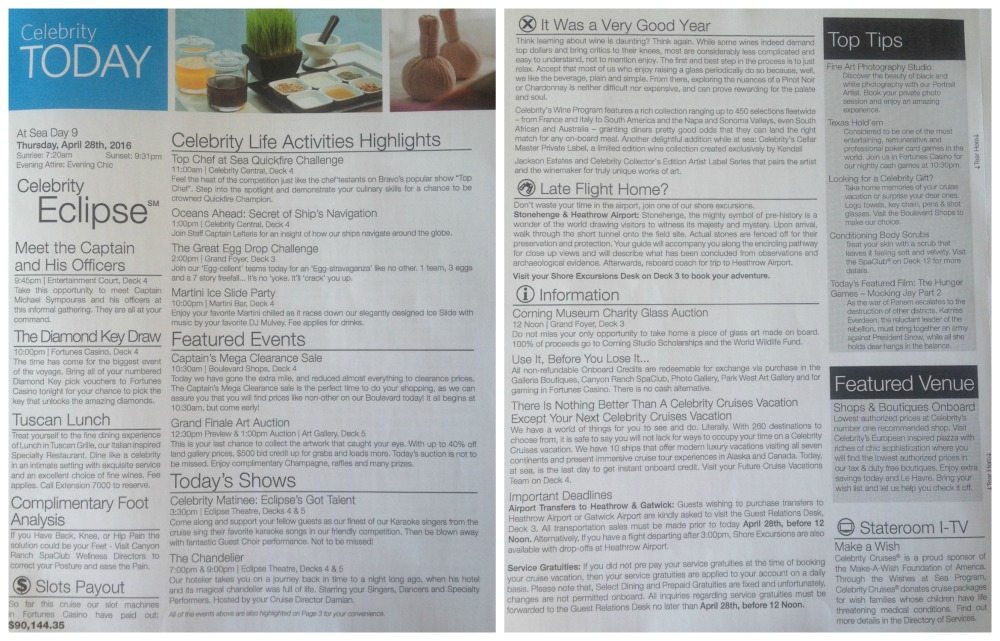 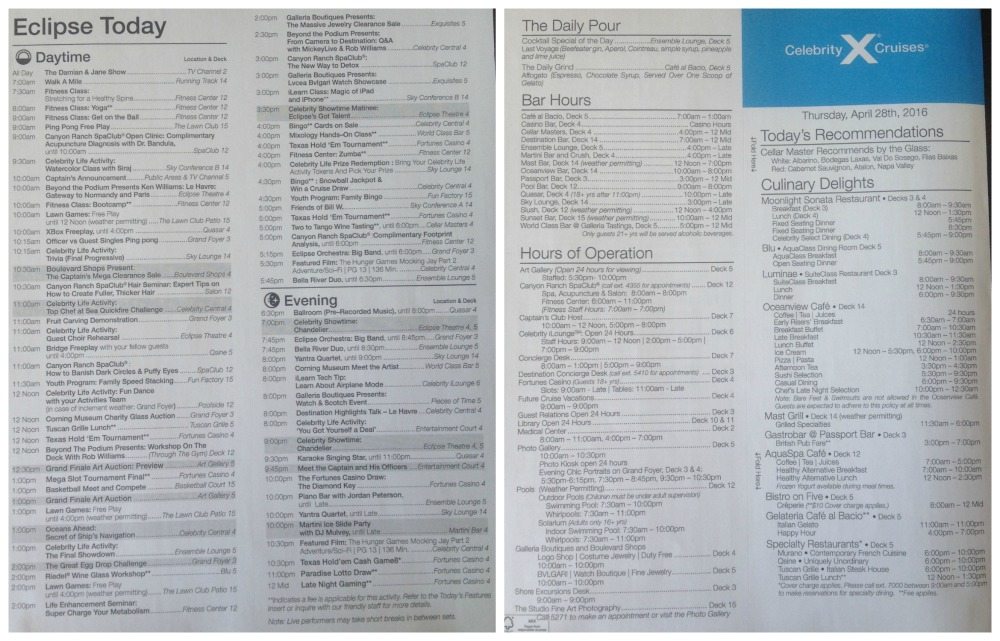 Welcome to the Bridge of the Celebrity Eclipse

Holy cow, yes you did read that right. We are on the bridge of the wonderful cruise ship that is the Eclipse. We could hardly contain our excitement while visiting the crusie ship Bridge, how could you.

Getting to see the bridge is not an everyday occurrence, (our first in 15 cruises) you just don’t walk up and knock on the door. It is a highly secure zone and even if you tried to get access you’d probably be locked up and put off in the next port. 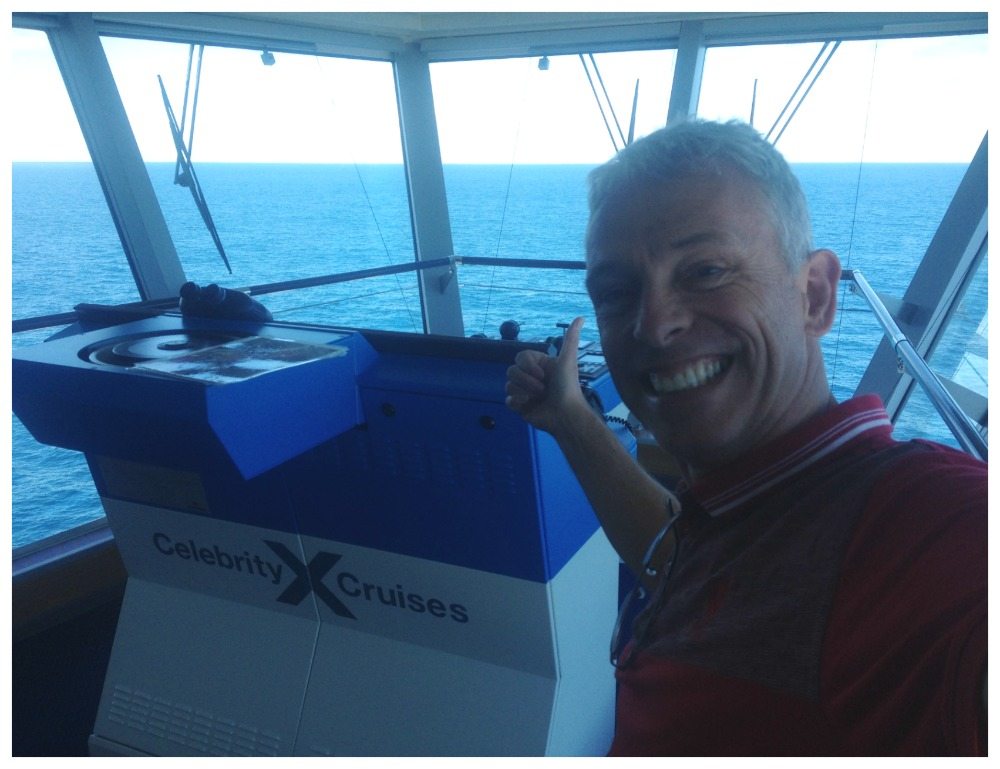 Welcome to the Bridge of the Celebrity Eclipse

Some ships offer tours of certain parts of the ship which include the bridge and these are quite expensive especially if you go as a couple. These tours are very limited and maybe only happen once or twice a cruise.

And will only happen on sea days which was great for us, having so many this cruise.

The views from the Bridge are pretty much 360 degree, except for behind the ship, but there are cameras for that. We were allowed to take some photos of which I’m sharing here with you.

Looking forward you can see down to where the staff have their outside playground. Looking along the side of the ship from the wings that protrude out from both sides of the bridge the offices have a clear view especially when coming into dock. 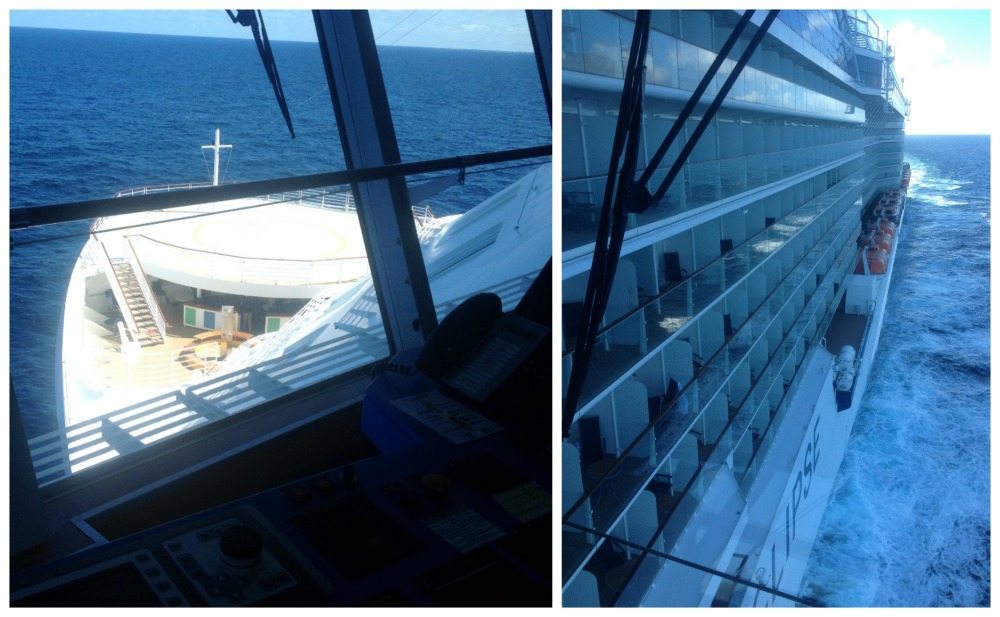 View from the bridge on the Celebrity Eclipse

This is one of the control consoles on the bridge where the officers have full control of the ship. The small round wheal in the bottom left photo is what steers the ship!! A slight movement will allow her mega tones to turn. 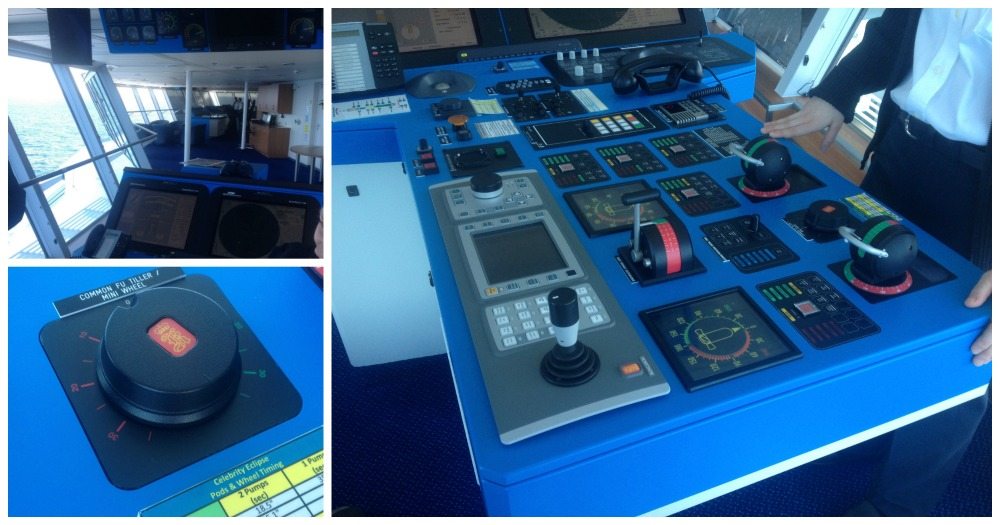 I bet most cruise passengers have looked up at this glass floor with many thoughts running through their heads, well, this is the view down from standing on that glass floor of the bridge, pretty cool right. 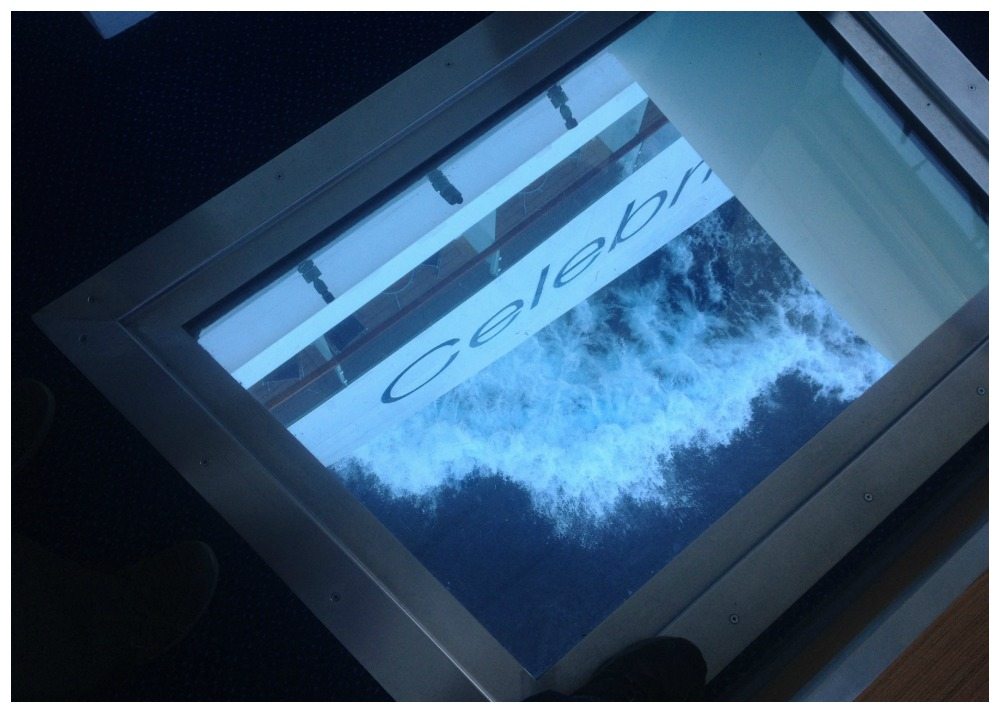 Bridge view through that glass floor

We had the ‘3rd’ officer on the bridge show us around where we were allowed to see and she explained some of the things from the control panel and radar screens of what we were looking at. 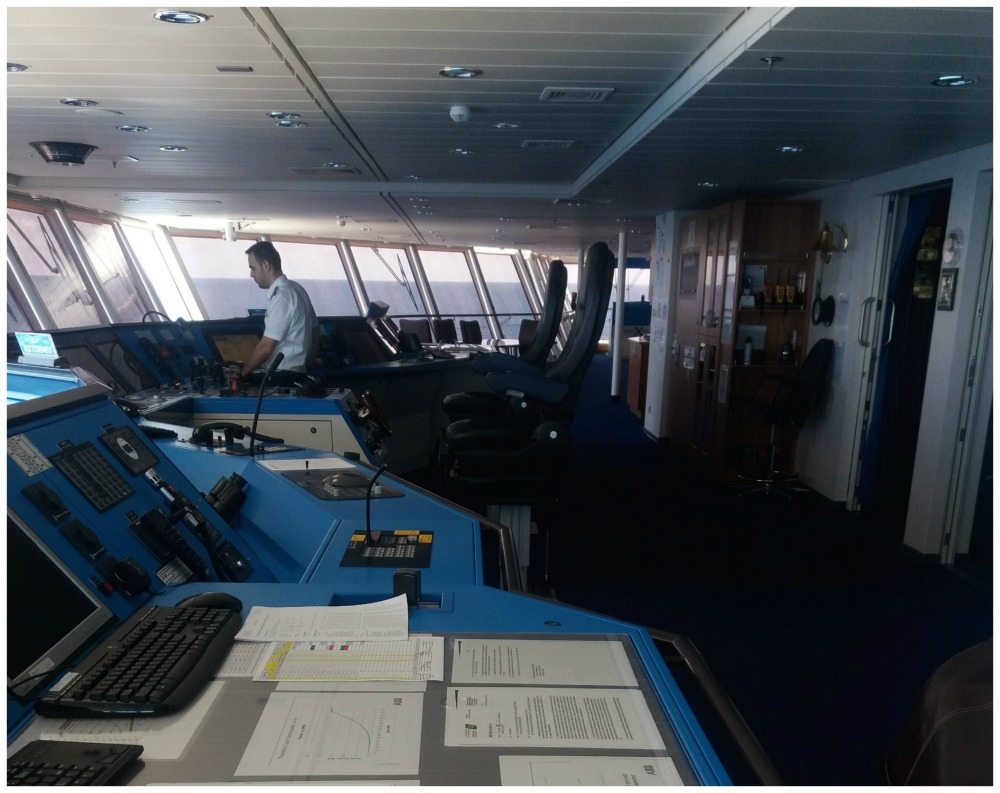 We did take some more photos but I think you get the drift of what we experienced. After about 20 minutes we thanked the officer and left the bridge. It was just amazing to have had this opportunity and a huge thank you to Captain Michael Sympouras and his officers that allowed us on the bridge.

Next up we needed lunch and to celebrate we dined in the Bistro on Five which was another first for us.

Bistro on Five on Celebrity 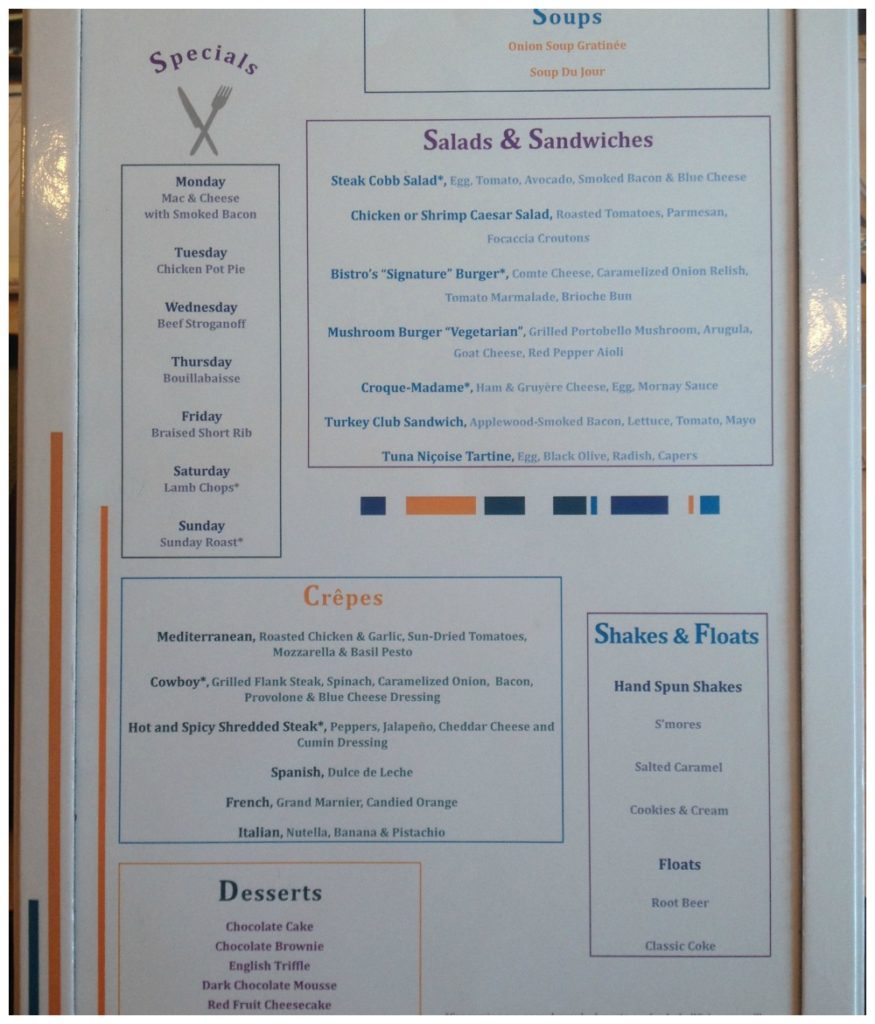 As I’ve mentioned before, this is our third Celebrity cruise and on both previous cruises we never got around to dining at Bistro on Five. On the Eclipse you can find the Bistro opposite the Café al Bacio which is obviously on deck 5.

The bistro is a place to go for a different meal, here you can have sandwiches, burgers, salads, crepes, shakes & floats. You can have as much as you want all for a $10 surcharge.

This is what we had to eat, Turkey Club Sandwich, Steak Cob Salad (without the steak), The Mediterranean Crepe and the Mushroom Burger. Plus a S’mores shake and a cookies & cream shake.

The dishes were all very tasty and filling, we couldn’t manage more. I’ll have to wait for another cruise to sample some more. 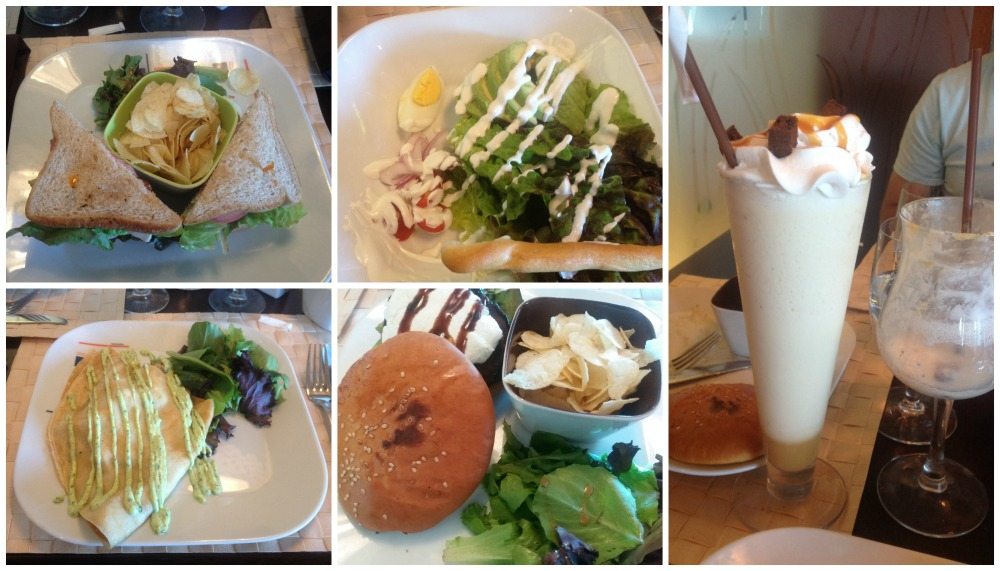 Bistro on Five meals and shakes

This is the Moonlight Sonata tonight with a mixed variety of attire. Some wore a tuxedo, others dinner suits, some just a jacket, while others had a shirt and no tie, and for the ladies there were the odd long gown, dresses, nice combo’s and even some with just a blouse.

Tha majority of passengers did make an effort to dress up even if only a little. 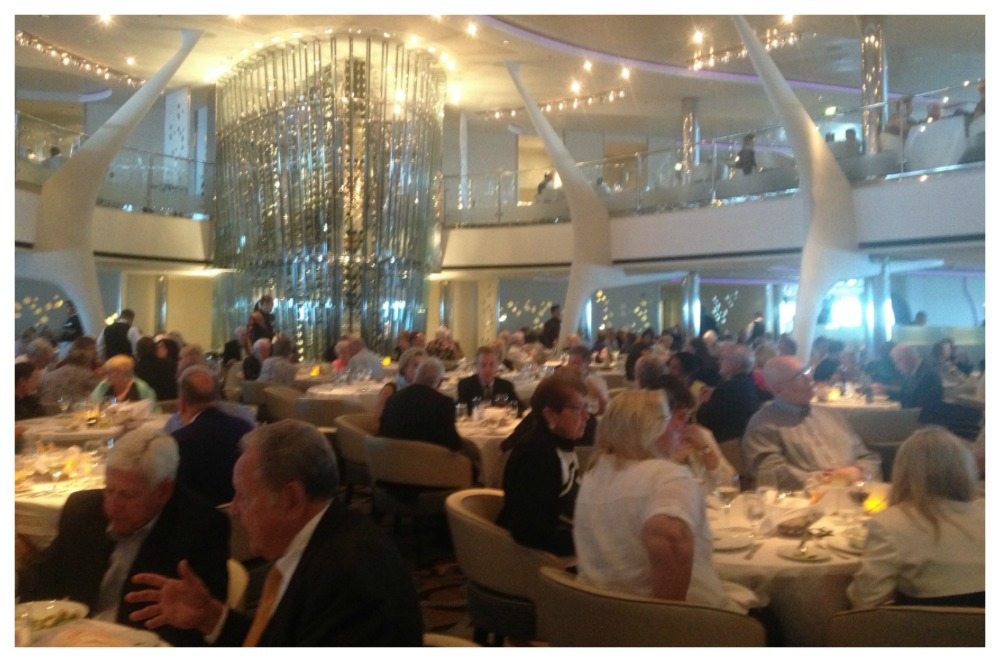 Tonight’s menu featured the popular Lobster as one of the main courses 4 out of 6 had the lobster and two had the Beef Wellington. 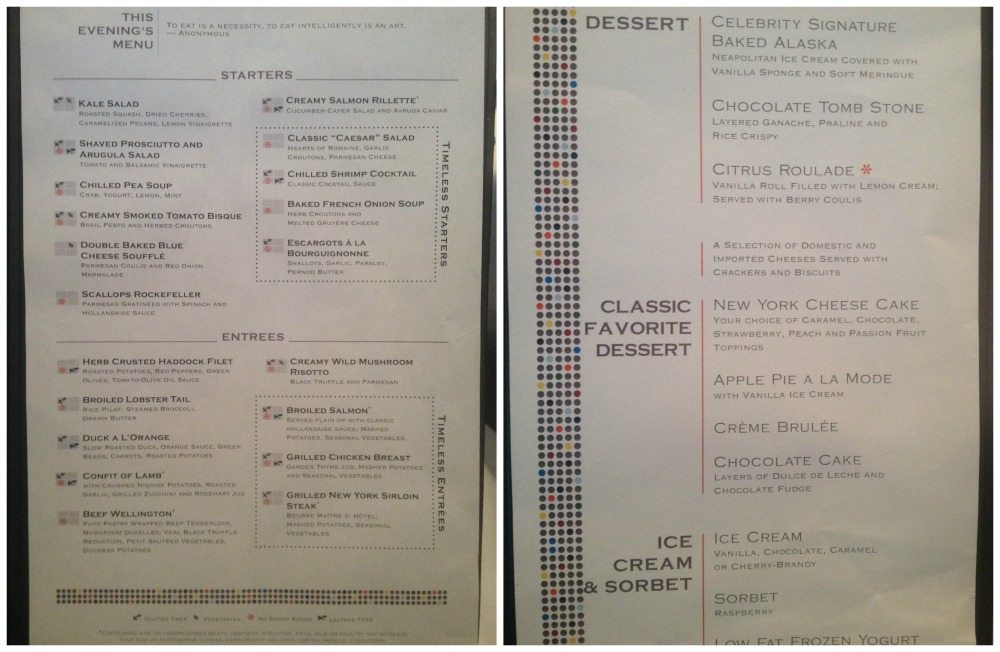 These were our starters of choice, Scallops Rockefeller, Mushroom Risotto from the vegetarian menu (sorry no photo) Shaved Prosciutto and Arugula Salad.

And for our main courses… Beef Wellington and Broiled Lobster Tail

Take a look at this waiter carrying plates stacked high and walking at pace, how many plates have you seen being carried? I think this was 12 or more on that tray. Imagine what that would weigh and then do that every night for 9 months long… applause for the restaurant team. 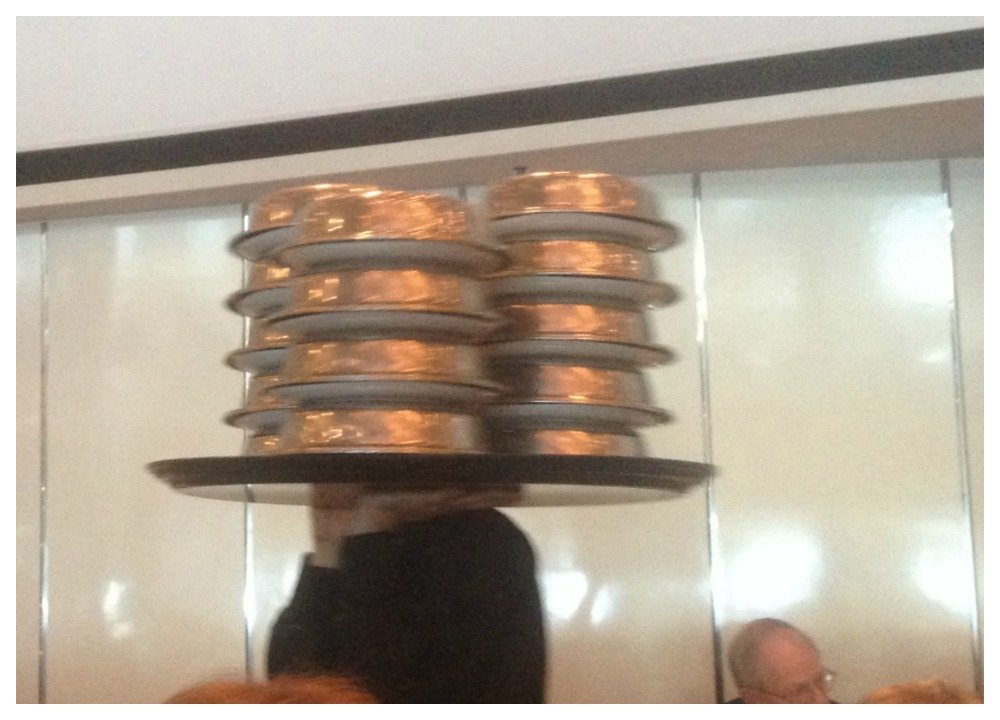 How many plates do the waiters carry

Desserts this evening featured the Baked Alaska but without the flaming Alaska show it has a lot less of an appeal these days. Instead we chose Chocolate Tomb Stone (which you can find in Qsine) and Creme Brulee (already photographed) a ball of Raspberry sorbet and a coffee.

Dinner was very nice once again, and I must comment that the entire cruise long we had some of the best MDR meals of our cruises.

A photo of our table guests Stu, Dotty, Bonnie & Jonathon and our two waiters Dion & Robert. Spending 13 nights with the same guests can go both ways, thankfully we all got along and had some fun conversations at dinner, thank you for being a big part of our cruise.
As for our two waiters, they were excellent at what they do, hardly missing a beat and putting up with a the odd extra order here and there. 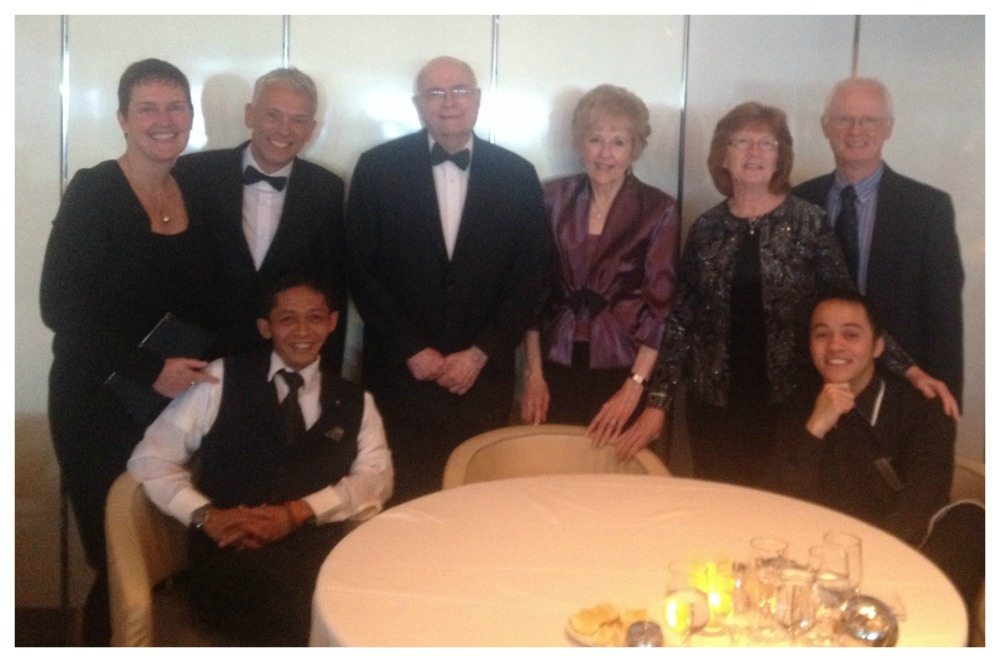 After dinner we made our way to the theatre for the final performance from the entire cast of the Eclipse singing and dancing performers. 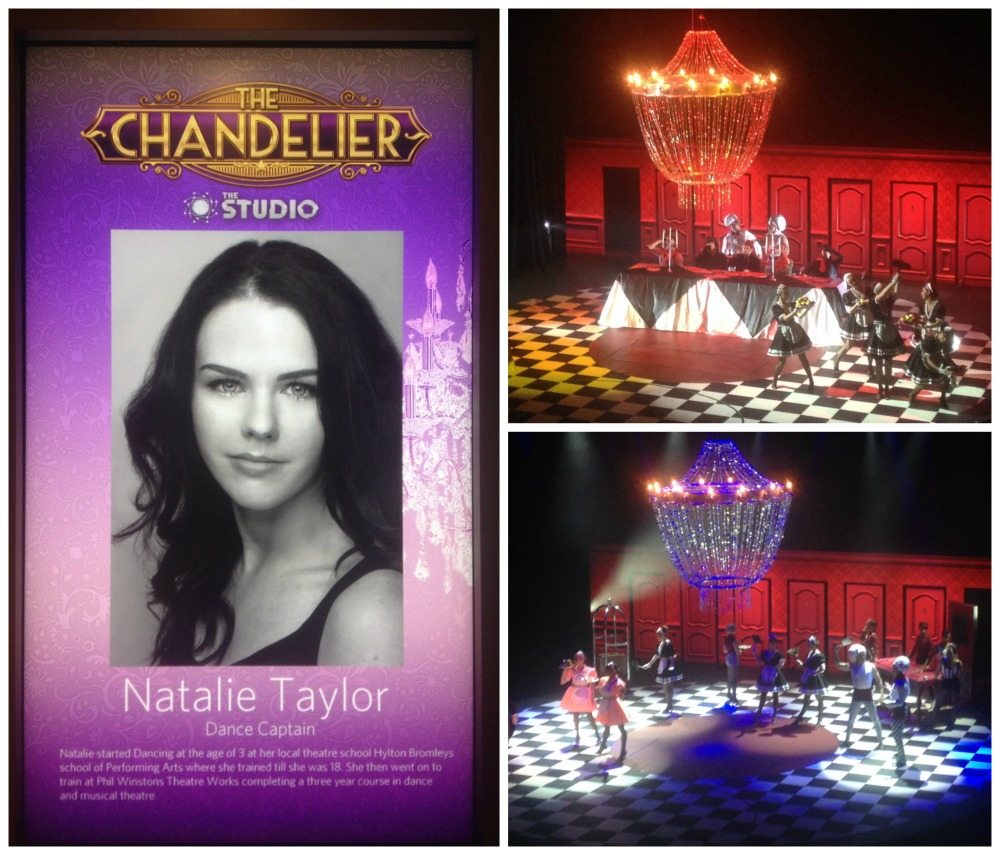 WOW, what a show. The production and quality of all involved was great. As I mentioned before at the other production show, taking photos and filming were encouraged, just no flash. Do not miss this show if it’s on your cruise.