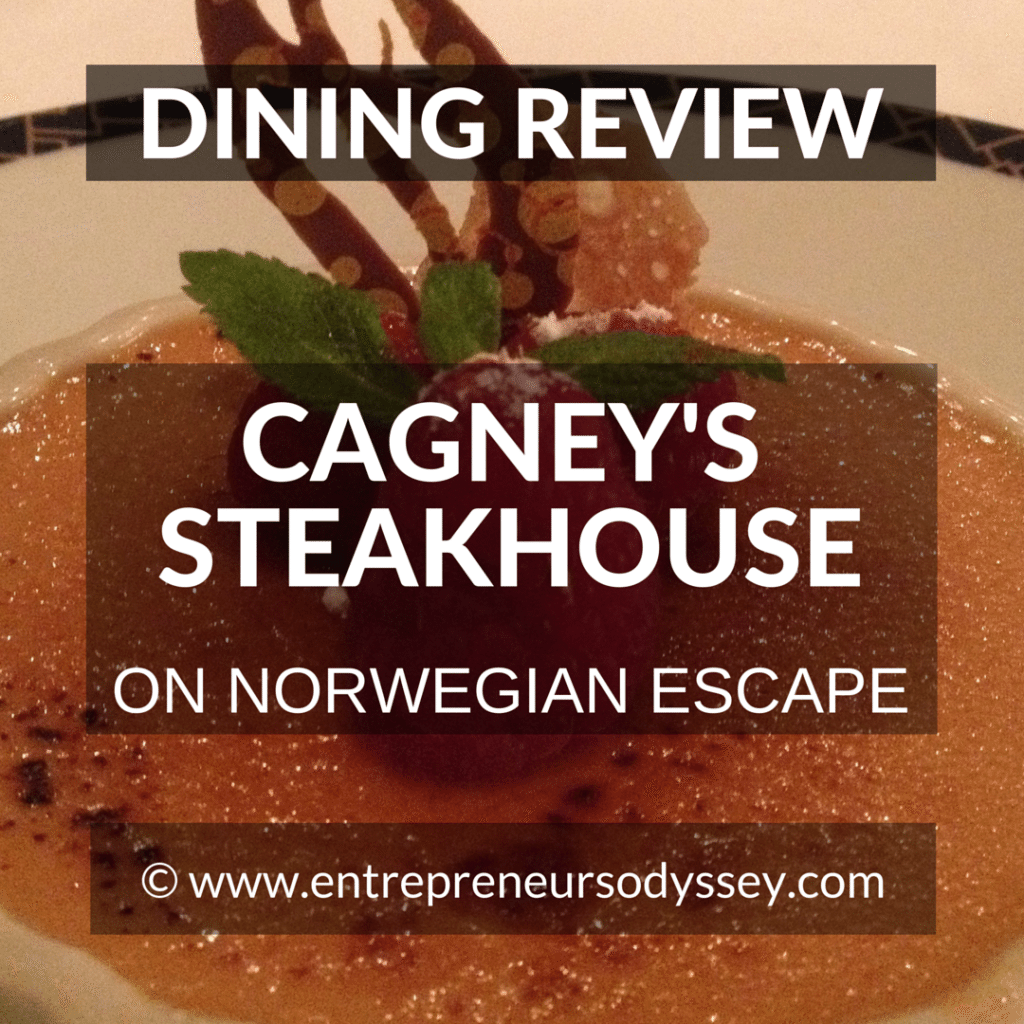 This is our Cagney’s Steakhouse Review during our Inaugural Transatlantic crossing on the magnificent Norwegian Escape.

Both Cagney’s and Moderno are located at the rear of the ship on deck 8 opposite each other with the Prime Meridian Bar between them. 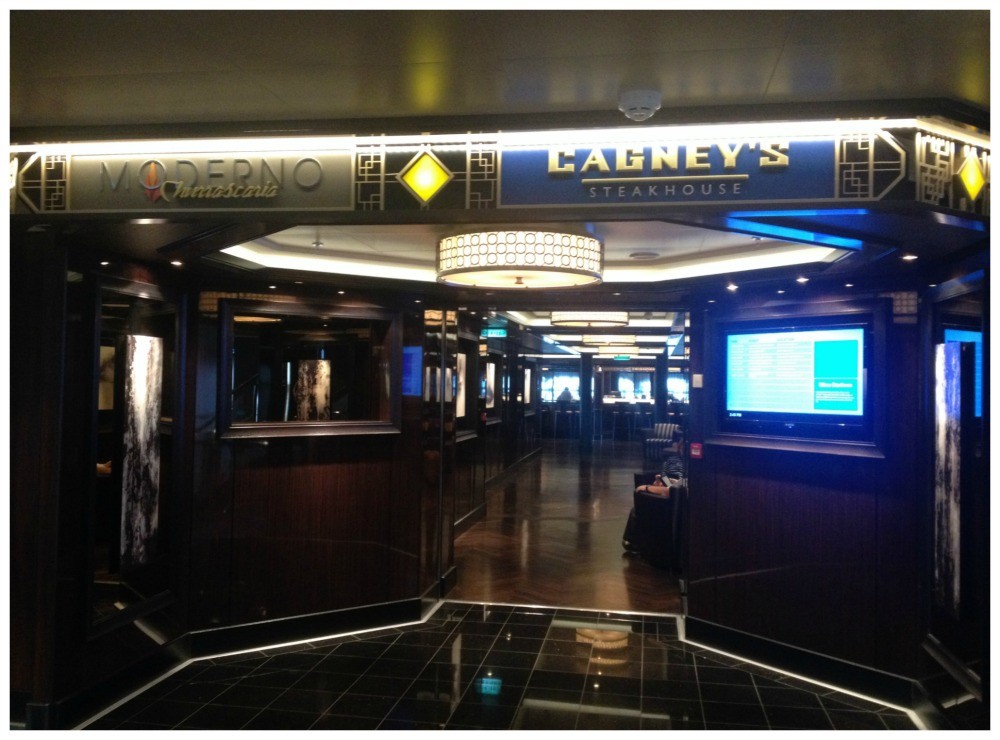 How much is Cagney’s Steakhouse?

The meals here are a la carte priced and our three course dinner would have cost $64.00 plus 18% service charge, once again making the dining package great value.

The steakhouse was busy every night, just like Le Bistro.

Our reservation was for 6pm and at that time we were both not hungry, also we had a booking for the show at 7pm which would have meant us not being able to enjoy the dining experience.

We chose to skip our early reservation and enjoy the show before going to Cagney’s at around 8.15pm hopeing to get in knowing that it showed fully booked.

Tip here; When booking your dinners be mindful of your show reservations or vice-versa, neither of the two systems work together so like us you could end up with an overlapping reservation.

Lucky for us we had no problem at all and were escorted to a table.

The restaurant is quite large and has plenty of tables which the majority are well spaced so that you’re not sitting on top of your neighbour. Another exciting aspect is that the grill part of the kitchen is ‘on show’ to the restaurant.

Be sure to ask for a table here with the hostess if you want to be near the action.

The Cagney’s menu is large and has other items apart from steak with a selection of seafood. Not much in the way of vegetarian options but there again it is a “steakhouse”. 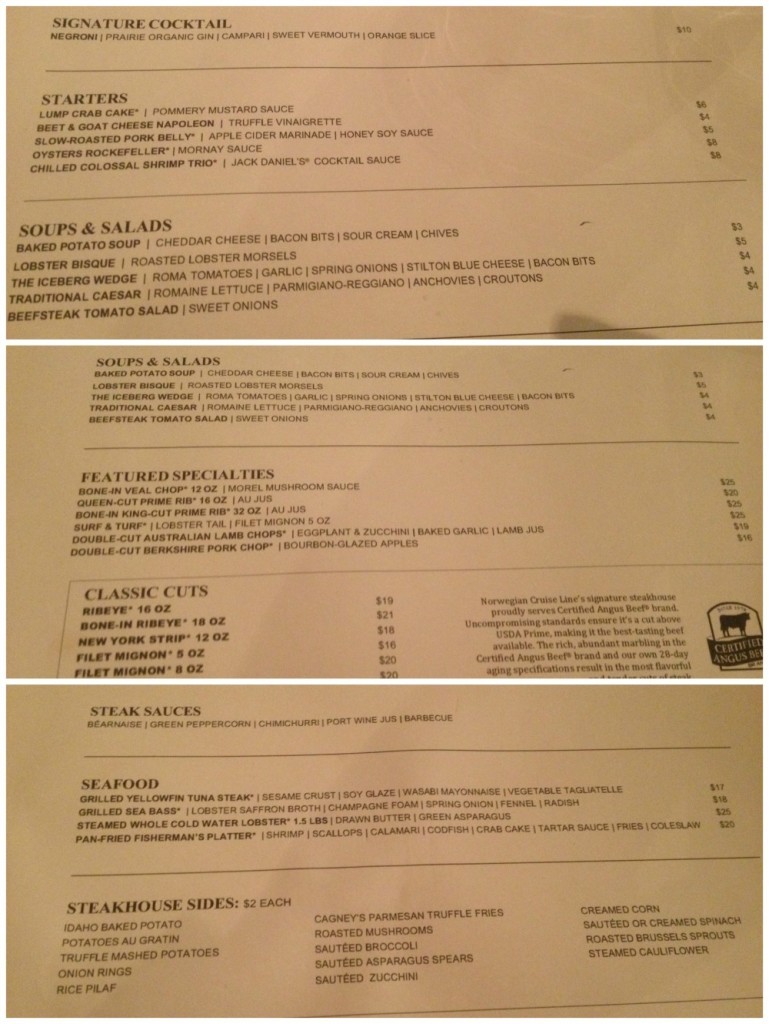 We ordered with a very competent waiter and enjoyed some red wine. Service was very good and the meals as well. So much so that we booked for a second night when leaving.

The starters, steaks, tuna and the deserts were all wonderful, actually the steaks were fantastic. These are some of the items we enjoyed over the two nights. 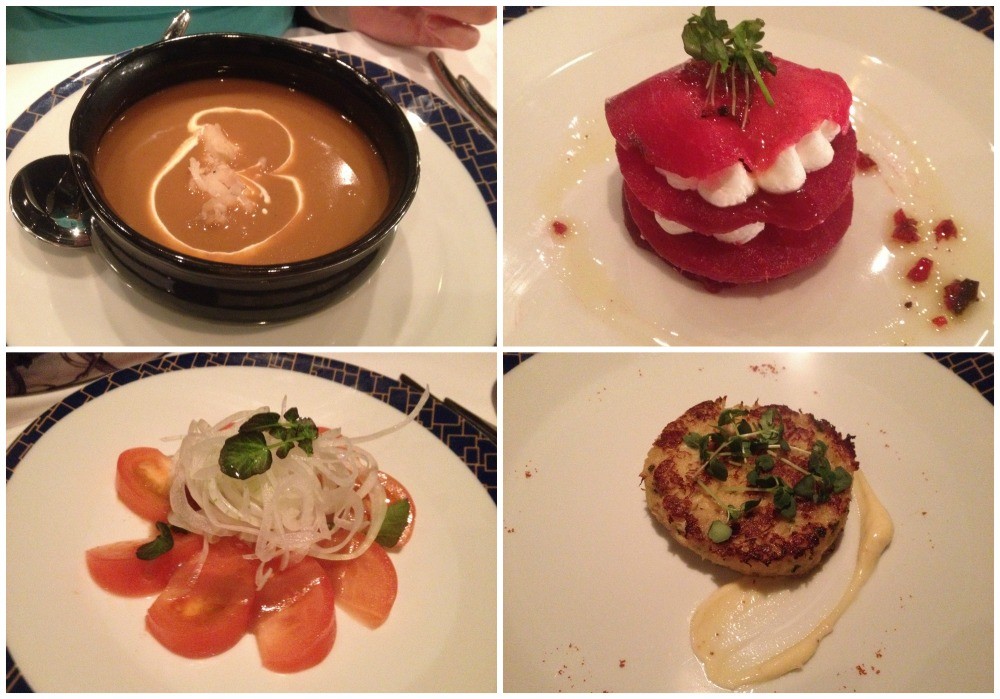 Selection of starters from the menu at Cagney’s

Top left to right… Lobster Bisque; which was rich and velvety. Beet & Goats Cheese Napoleon; very nicely done with wonderful flavours. Beefsteak tomato salad; this was rather basic which was surprising considering the other meal quality. Lump Crab cake; this was delicate and moist, wonderful. 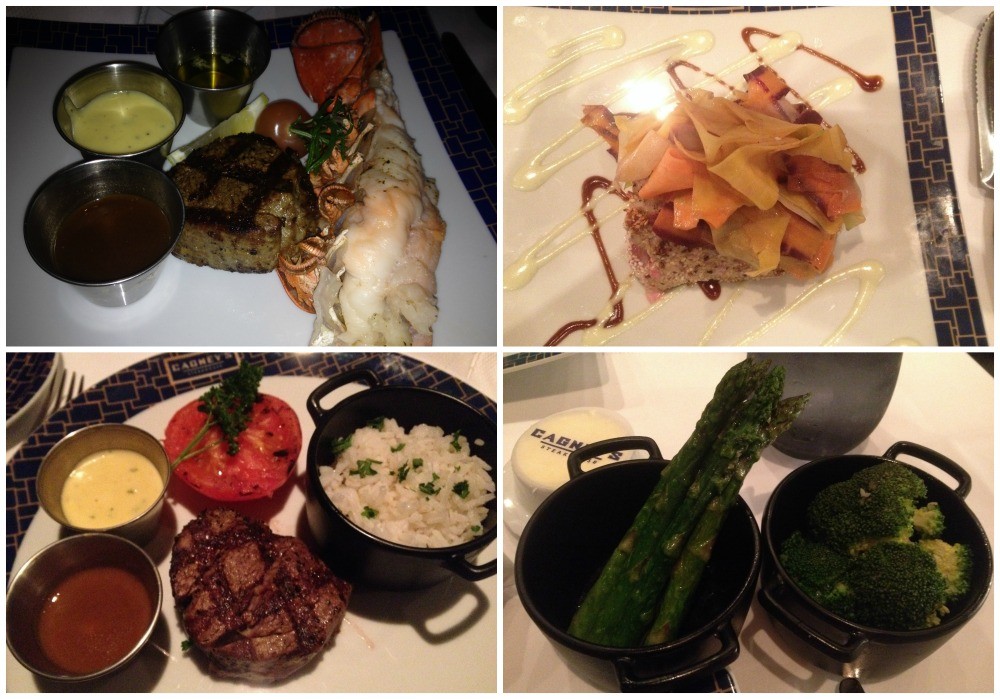 Selection of main meals at Cagney’s

The main meal selection was great as well… Surf & Turf; the steak was cooked to perfection and the lobster tender & moist. Grilled Yellowfin Tuna Steak; was very nice and like cooked rare so not dry at all.

The second night we had the Surf & Turf again with a standard Filet Mignon. We also had a selection of side dishes and sauces, each one was perfectly cooked and full of flavour. I feel sorry for the kitchen washer with the little pots for each sauce and side though.

The Dessert menu from Cagney’s 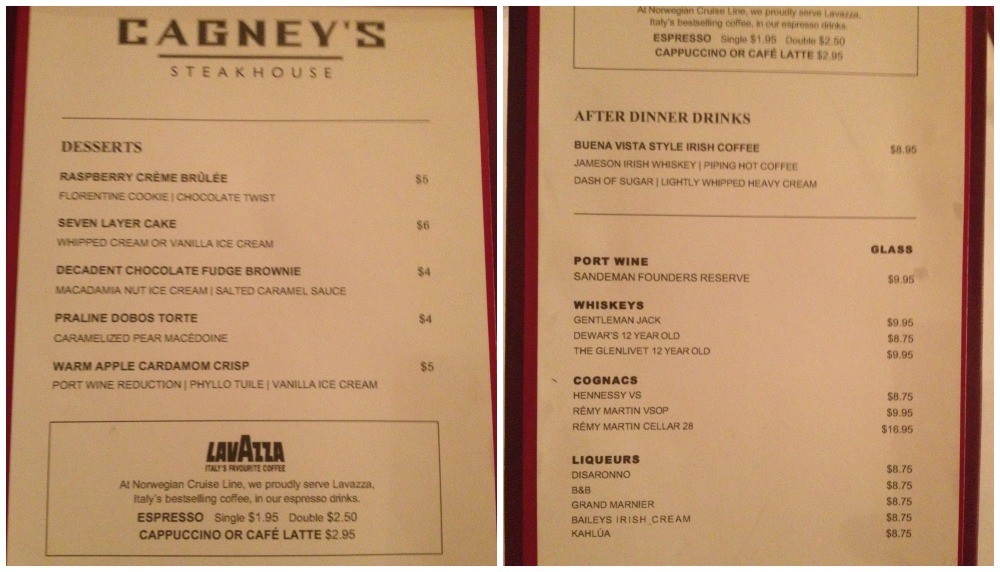 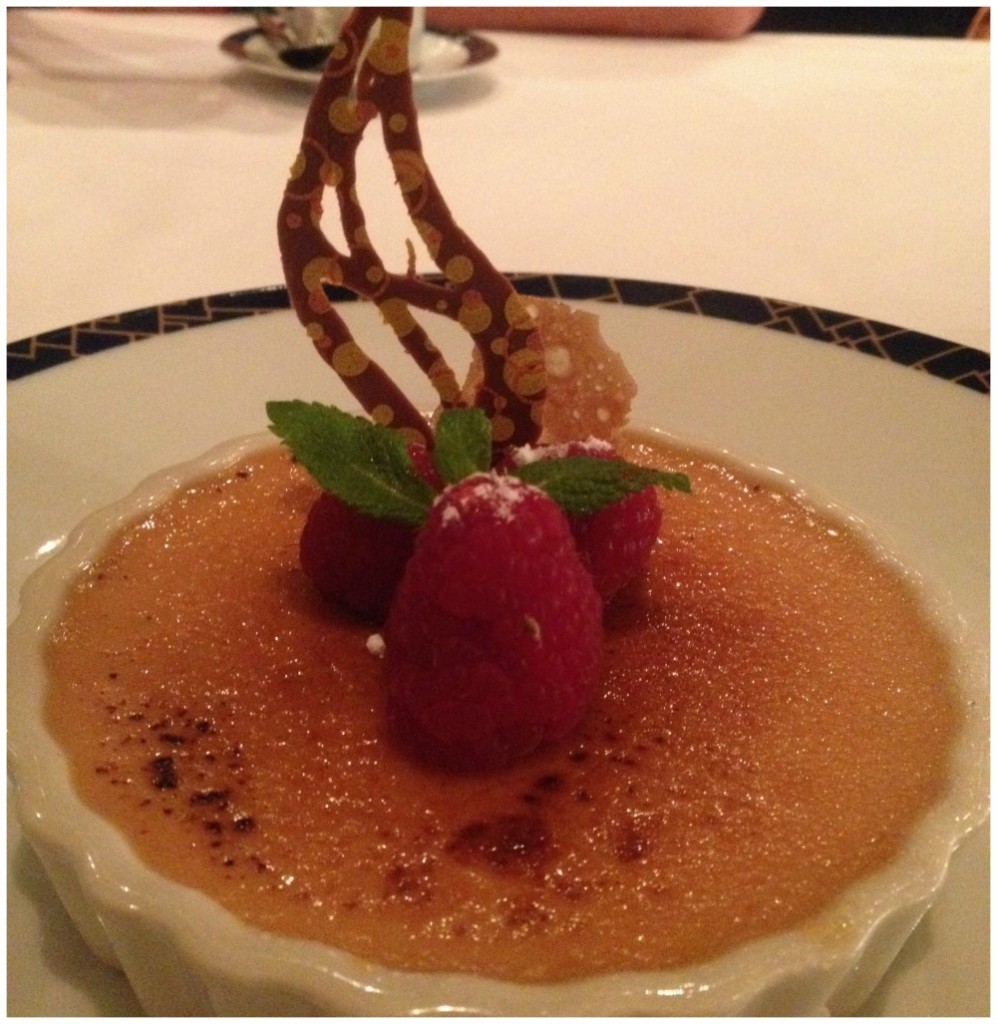 Moni chose to enjoy an espresso while I had to sample the Brulee. A brulee is one of those classic deserts that if you put it on the menu it has to be perfect, a bit like a Tiramisu in an Italian. They are dishes that are often heavily critiqued.

The brulee was very good, a thin crisp sugar top opened up to a smooth cream. The only disappointment was that there were no raspberries inside only on top. But very well presented.

Considering that the restaurant was very busy the ambiance in Cagney’s was relaxed and enjoyable. The food and service were both very good, not overly sophisticated being a steakhouse but done with style. It would be hard to fault this dining venue based on our two evenings here.

With tables at a reasonable distance to others, if you’d like a romantic dinner on the Norwegian Escape then this is the pace to go.

Which makes this our favourite dining venue on the Norwegian Escape from the places we managed to try. There are 28 dining options on the Escape and some we missed out on through lack of time. Be sure to make your reservation early.

Do you have a favourite speciality restaurant of any cruise ship? Have you experienced any of Norwegian’s dining venues? What are your thoughts on the a la carte pricing for some venues? We’d love to know your thoughts in the comments below.

Before you go, you might like to check out our dining review of La Cucina, the Italian restaurant on Norwegian Escape. 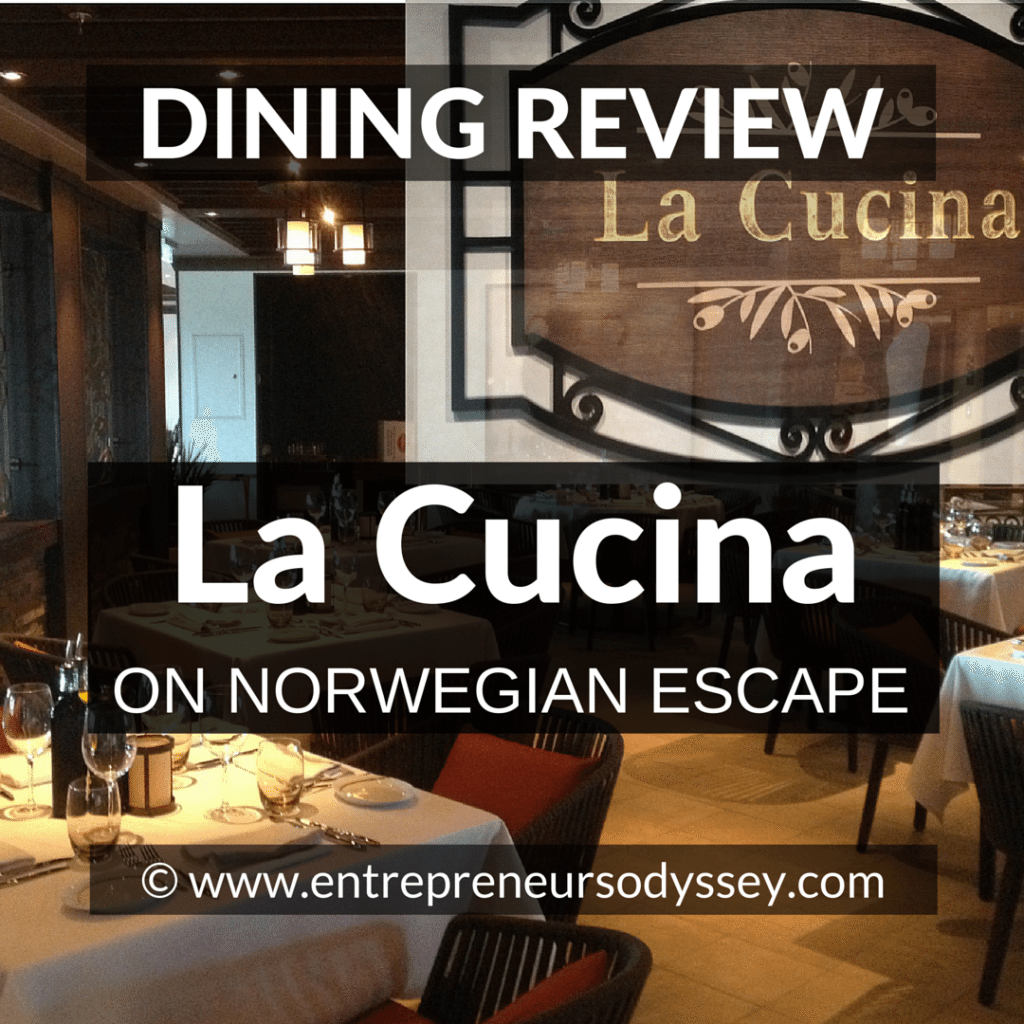