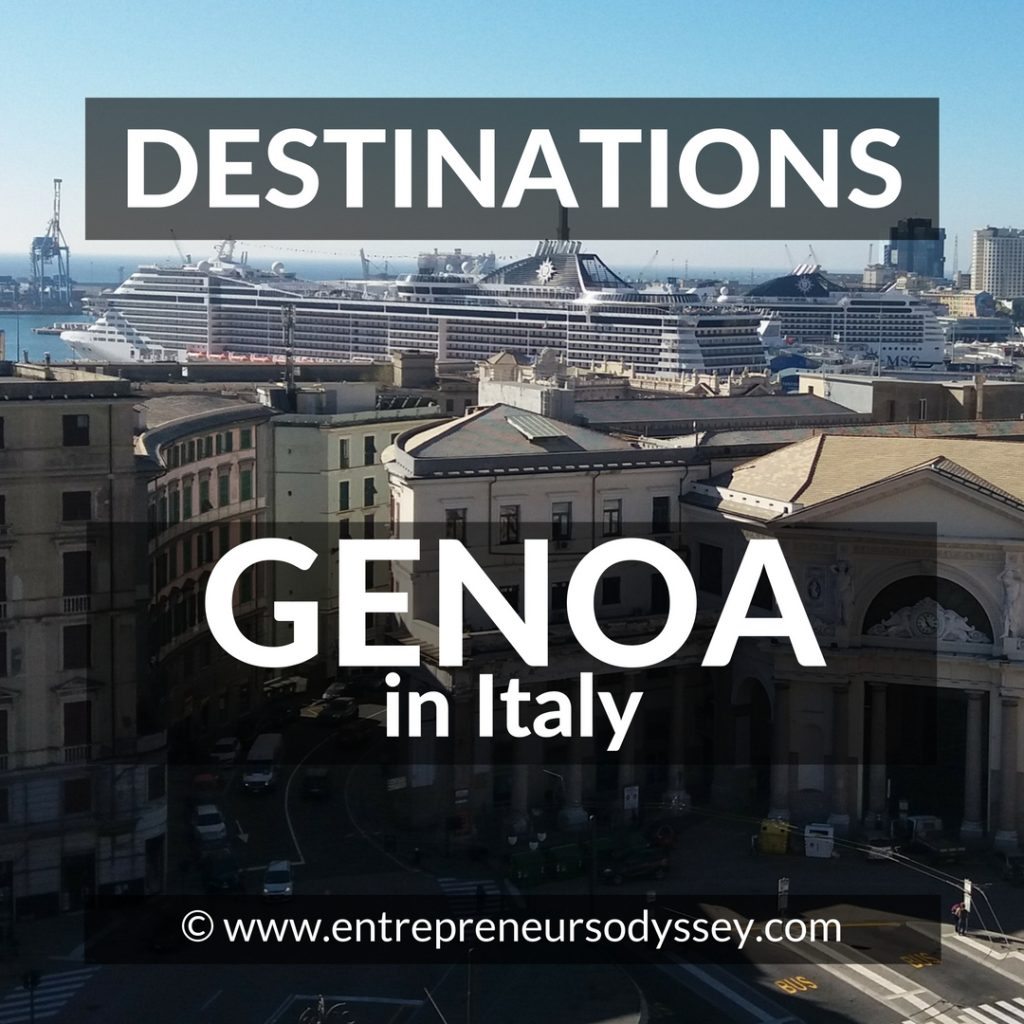 The weather was not real flash first thing this morning and we headed to a cafe close by for breakfast. 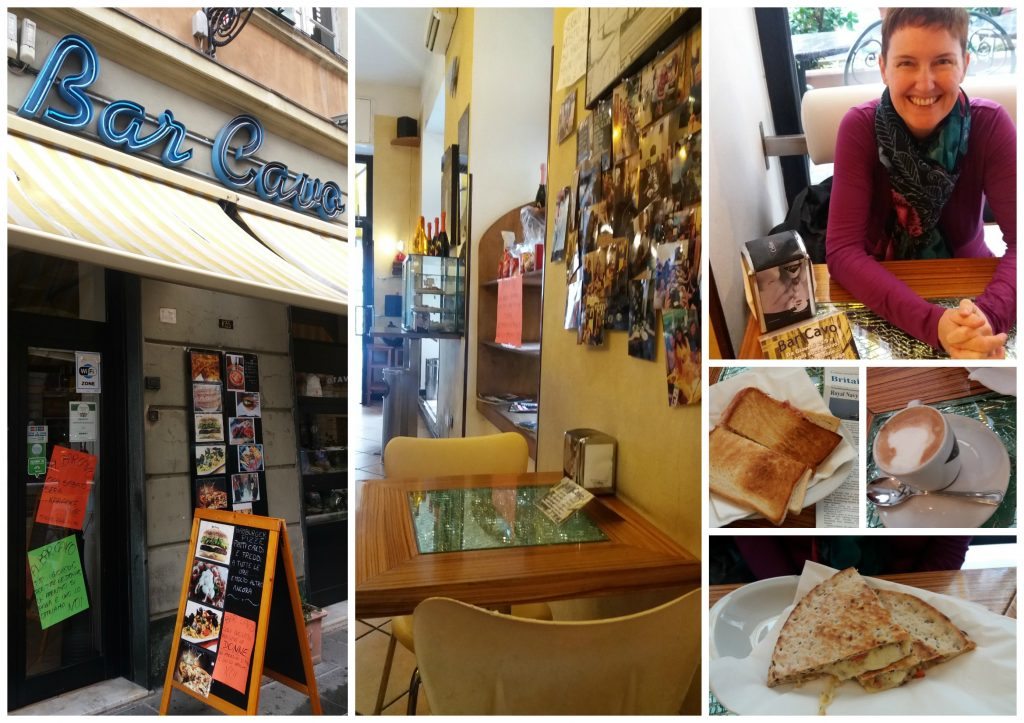 This is our only day in the city before our ship departs tomorrow for a 7 night Mediterranean cruise round trip from Genoa.

Walking around Genoa is quite easy and there are plenty of signs to guide you. Without any plans we headed towards the port. 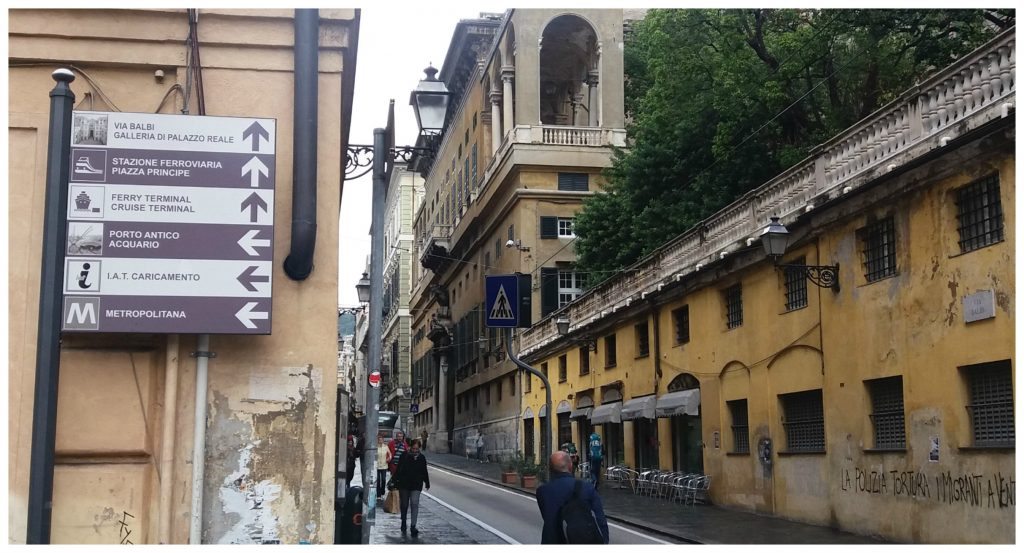 Thankfully the sun shone through the clouds and the rain stayed away until the evening.

Down at the old port of Genoa we could see the two MSC cruise ships in port and walking between the Aquarium and the Biosfera you get to a platform with good views around the port. 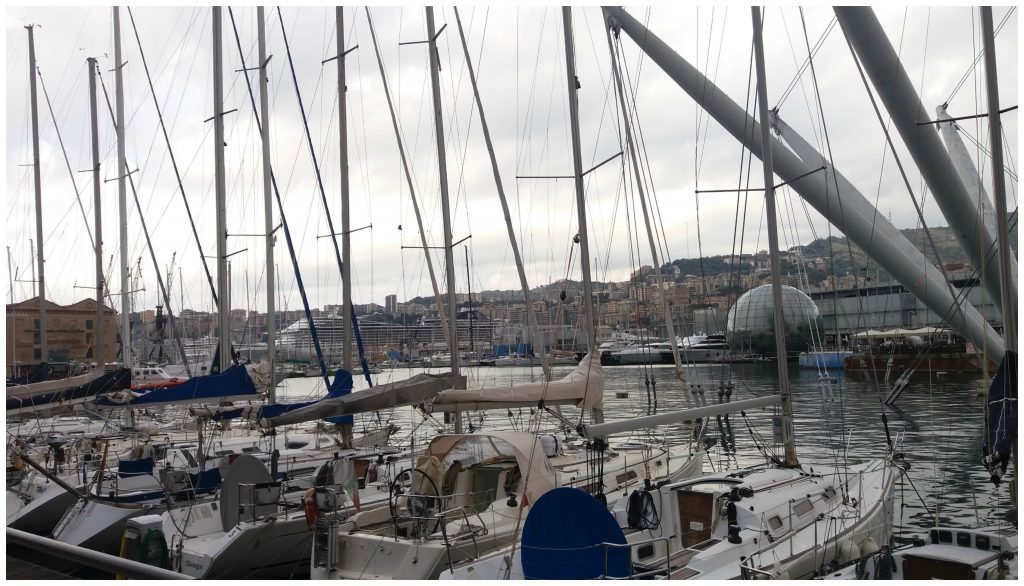 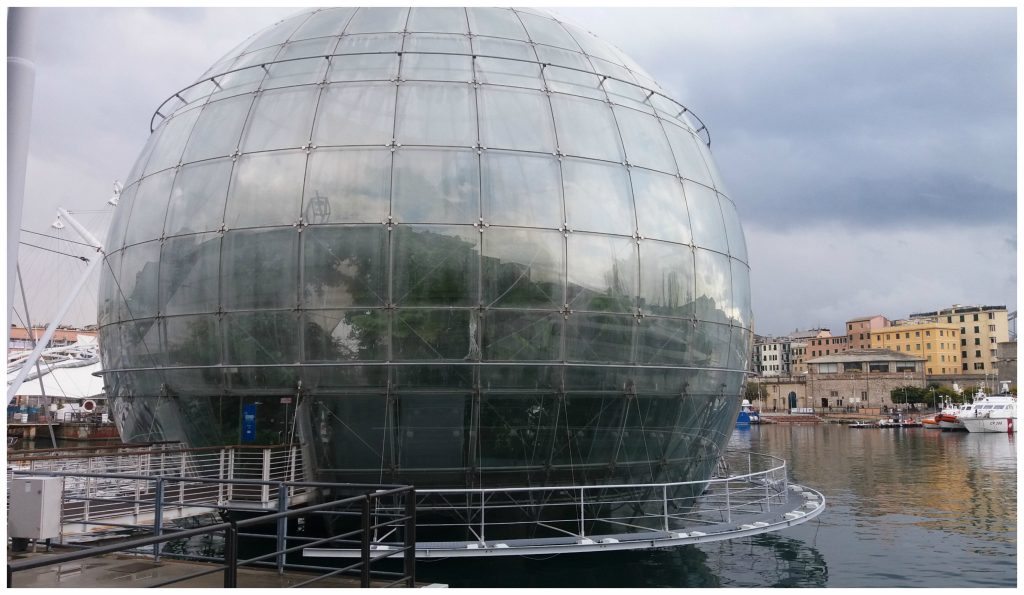 The large glass ball that you can see is actually a climate controlled environment with plants, birds, and other animal life which you can go in and walk around.

Having experienced this actual tropical arena in reality in Australia it didn’t beg us to pay the 5 euro per person entrance. And after seeing people go in and return within a minute it obviously was not that exciting! Now that I have just checked the tripadvisor reviews I understand 🙁

I mentioned that the Aquarium is right here as well and was reasonably busy. For a 25 euro entrance it would probably be very interesting few hours, but having been to many aquariums including the Osaka Aquarium we gave it a miss and continued walking. 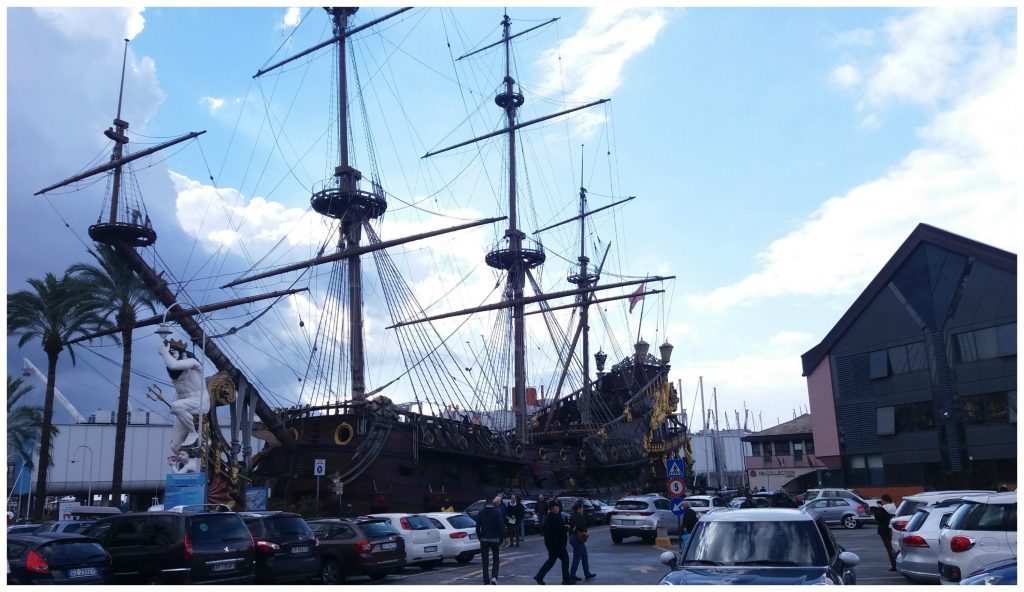 The locals call this area Porto Antico which means the ‘old port’ and here is an old pirate ship called Neptune which has featured in many shows and movies. For 5 euro you can go aboard and look around. 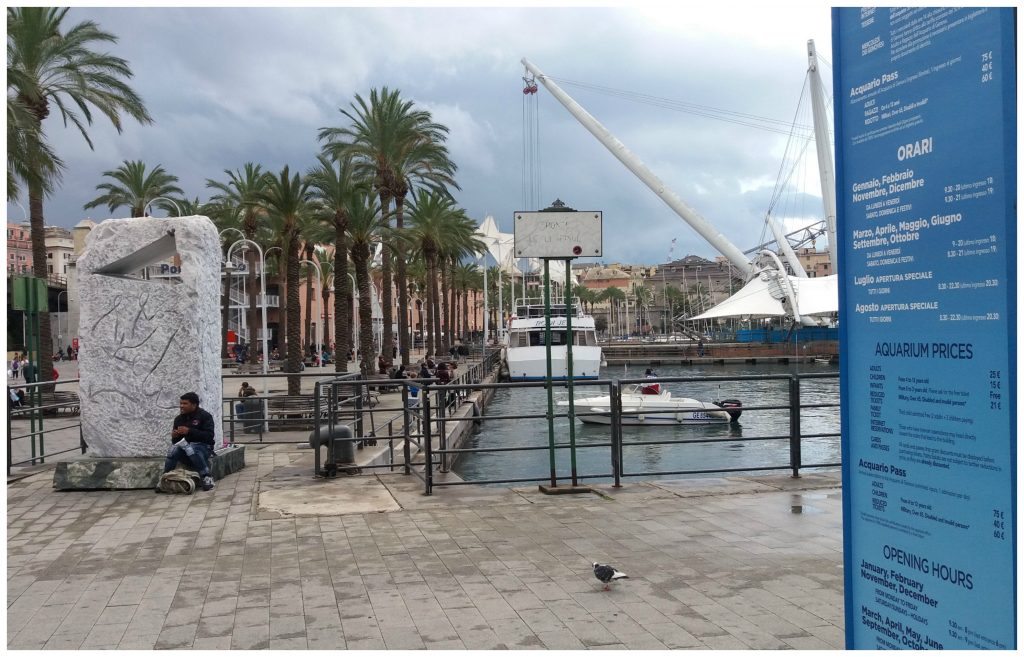 Looking back towards the Neptune Pirate Ship in Genoa Italy

On the other side of the porto antico is a long brick building that used to be a warehouse and now is home to shops, cinemas and other places. The marina is full of boats of all sizes with some really large vessels of the rich & famous. 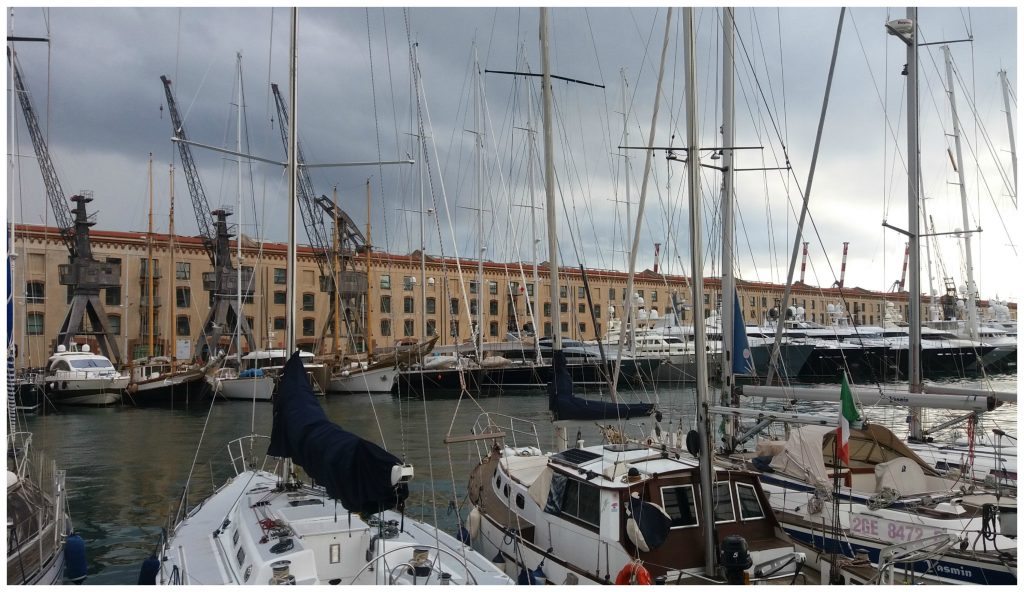 The buildings in Genoa are quite stunning in many ways and the city has a great vibe to it with tight streets and alleyways tucked left & right. Plenty of cafe’s, restaurants and delli’s. 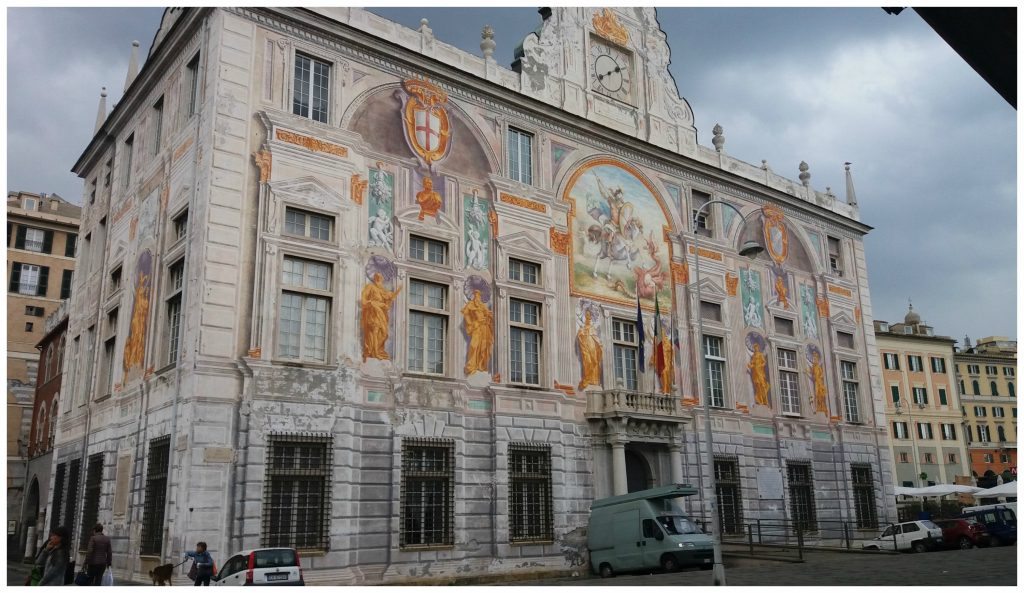 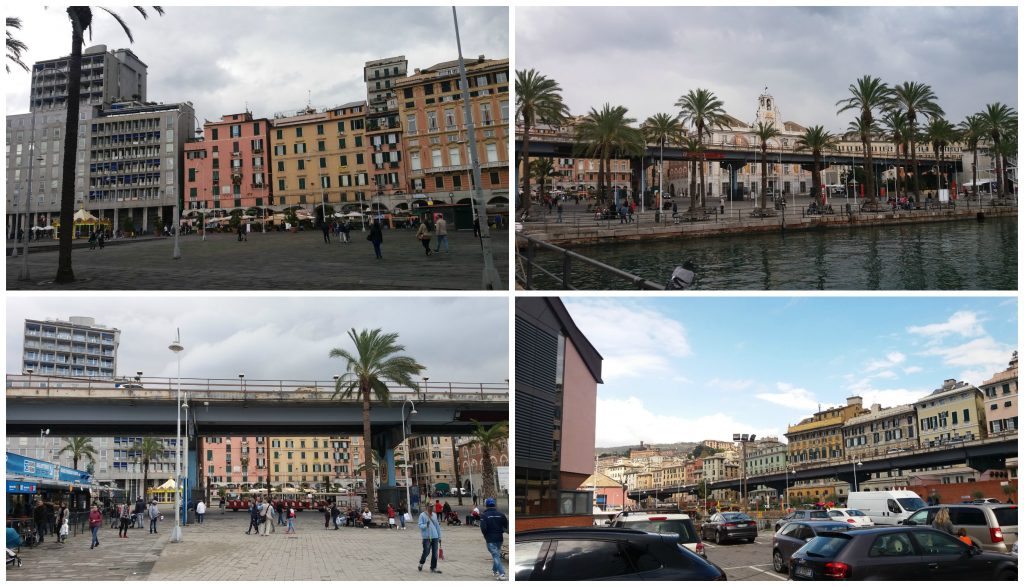 Down by the harbour in Genoa

This is the view we had after walking to the very end of the long brick building in the old port.

Cruise ships in port at Genoa

Just over the road from this big building is what looks like an old fort of the port which holds the museum Luzzati. 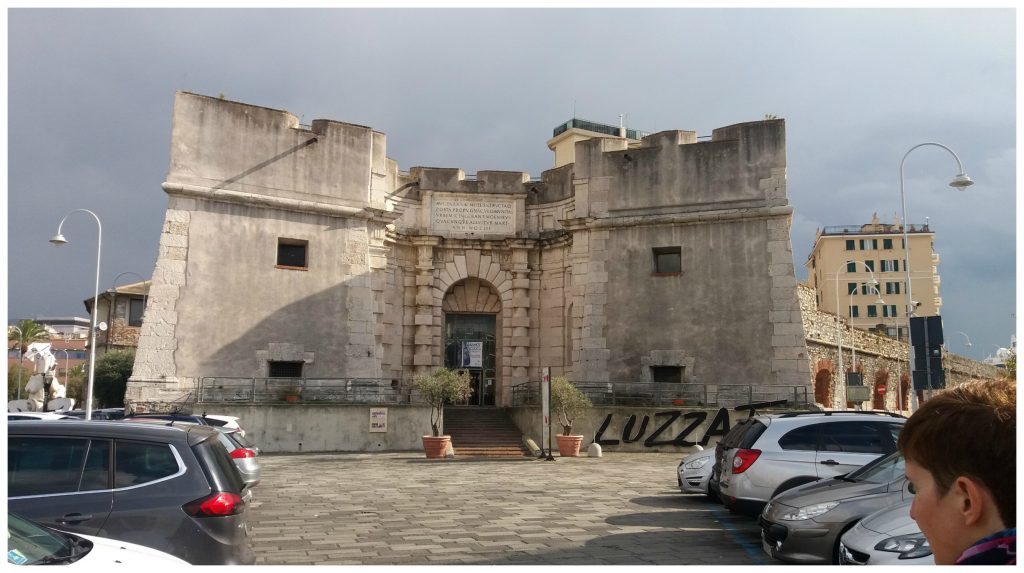 This strange looking character is outside. 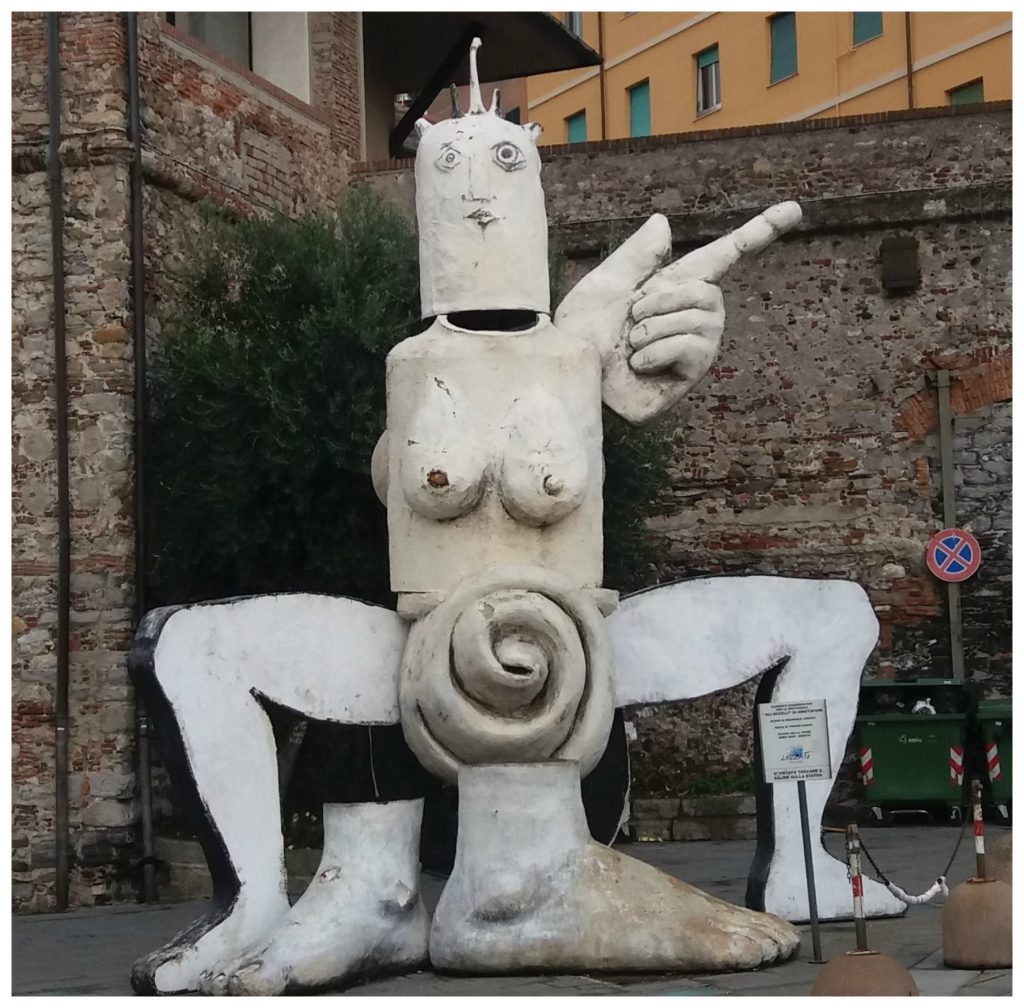 Walking around the walled area of the old fort past the docks we come back towards the main town area again with a wonderful archway with shops etc all along.

It’s amazing that these delicatessen are allowed to display their produce like this, food health & safety must be very relaxed indeed 🙂

Seeing all these wonderful products it was making us peckish and a coffee was in order with a small snack. 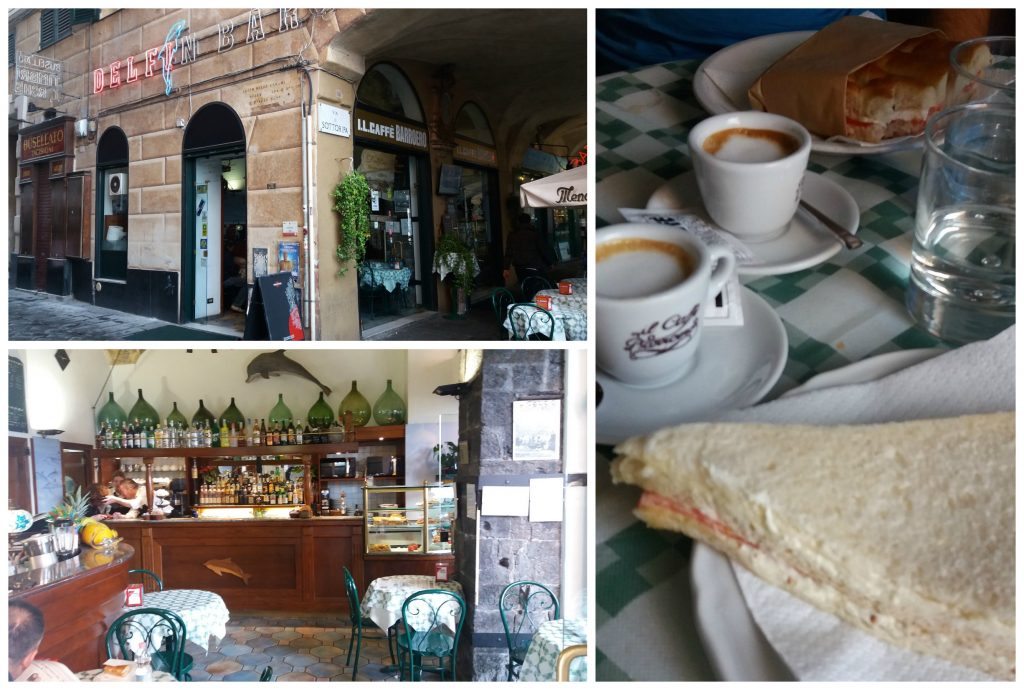 Delfin bar for a coffee & snack

Back out on our feet we continued to wander around by now, the city was bustling with people and many football fans of Genoa singing aloud.

There is lots to see in this city especially old buildings and museums.

We soaked up the atmosphere and admired the Italian way of life, easy-going yet somewhat sophisticated.

With all this walking we had a great appetite by the time evening came and as soon as the rains came we decided to have dinner.

When in Genoa you have to try some dish with ‘pesto’ as this is the home of Pesto. We enjoyed a pasta with pesto which was delicious the best I’ve ever had 🙂 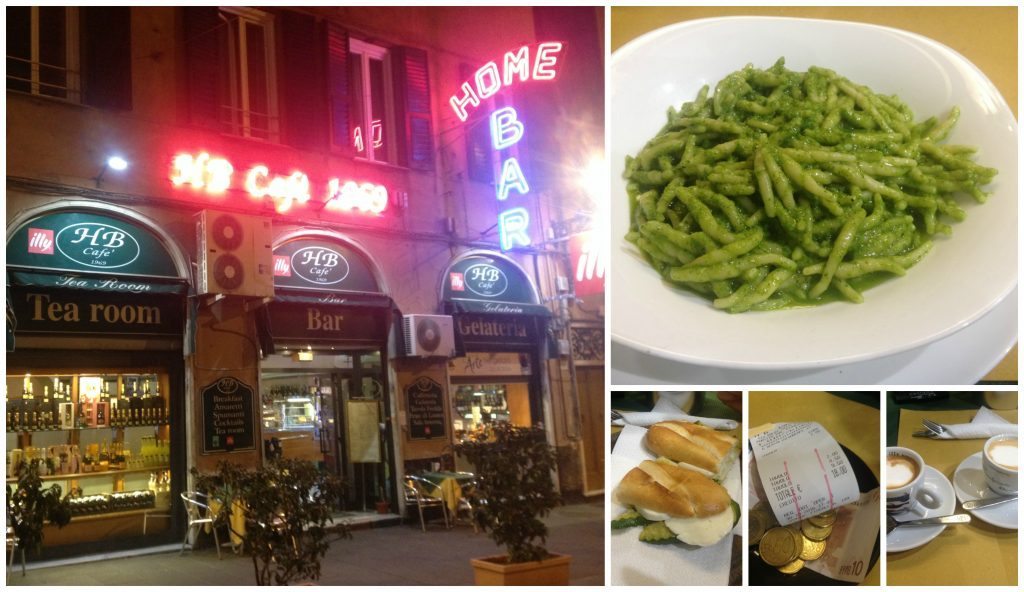 Pasta with Pesto in Genoa at HB Cafe

The HB cafe is also close to the Grand Hotel Savoia where we stayed and other hotels nearby, plus they have good Illy coffee 🙂

Even though that was it for the day, just walking around the city we got a feel of Genoa and really liked it. After our cruise returned we spent a little more time here before our train to Formia which is home for the next few months.

Lucky for us the weather for this day was fabulous 🙂

Sunset over the port of Genoa

The top of the Savoy hotel allows for great views over the port and Genoa train station ‘Genova Piazza Principe’.

Port of Genoa & the train station at night